Less is Always Least at the SEMA Show 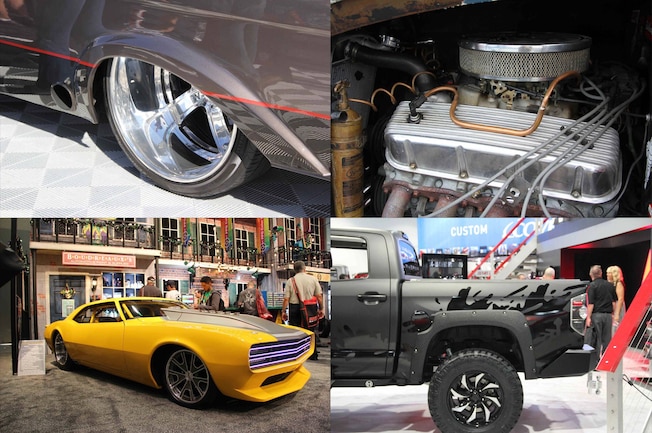 We’ve walked all of the halls, scoped out every display, shot every car and truck, and other things there are at SEMA, and now it’s time for our yearly trends post.

Every year we see the sea of sights at SEMA Show, but once we see certain components, tricks, or colors repeating, we bring it to you for your chance to agree or disagree on the staffs’ observations of the show.

Some of these trends have been around for a while, but have been marinating while designers and builders bring them to fruition. Still others we have not seen before, only to be confronted with them on numerous cars or trucks. That’s a trend.

Overall, we’d say that there seems to be a release from the constraints of the past. Builders are trying different combos and colors that we would not have seen even two or three years ago. There is less inhibition and more flamboyance and creativity popping up—which can be good or bad depending on how well it’s executed and whether it’s actually cool or just an attempt at perceived coolness.

As a general trend we would also say that the accepted approach to SEMA builds is if one is good, two are better; if big is good, bigger works better; and less is least at SEMA. Sometimes complicated solutions do not necessarily make sense, but they attract lots of attention for their complexity and fabrication challenge. So the fabrication is, in some cases, taking precedence over function, just as in some cases elaborate paint jobs become an exercise in paint mastery, and not necessarily as a design element that integrates well with the car or truck.

Copper is the New Chrome

We are seeing copper-plated wheels, components, and tubing used on many builds—especially on black vehicles. In many cases it’s the steampunk trend oozing over into car building, or maybe the builder likes the look and uniqueness of copper. Maybe they like how it contrasts with black and dark colors. Who knows? The point is it’s being used in different ways on many cars at SEMA this year.

Nickel is the New Chrome

It would appear that nickel plating and/or brushed trim and bumpers has taken over, leaving chrome as useless as yesterday’s newspaper. Most of the big-dog builders brought cars to SEMA that featured toned-down trim and bumpers in some form or another.

Especially with the imported cars, this is huge, and reflects the aero management seen on road racing and Formula 1 race cars migrating down to street cars. The oft-times fragile, simplistic splitters and diverters look a bit Ricky Racer to us, but they’re extremely popular and quite the trend at the moment.

We’ve seen this on bikes for years, on engine components, and done sparingly on low riders. But it has been spotted on numerous cars at the 2015 SEMA Show indicating that builders like the elaborate, fussy detail of etching on a larger expanse of metal. Much like engine-turned gold leaf, it pulls you in to give your eyes a second look. We can’t say we’ll be seeing this pop up on Drag Week cars, but as a focal point it does have a certain double-take quality about it.

What we are calling “banded” details are going beyond the aftermarket off-road truck grilles we have seen for years—it’s now taking over whole sections of cars and trucks. It may be an excuse to also add round-head bolts or chrome-y studs for added bling. Whatever, we are seeing more and more of it enveloping the whole car like a metal form of kudzu.

It had to happen. With LED technology being cheap and easy, it was only a matter of time before it would be introduced to every crevice and fold of the car, and now it has proliferated to wheels. We saw quite a number of lights as dress up items integrated into wheels. Since wheels are the only part of the car you actually see move, it makes sense as an attention-getter.

There are at least three of these sectioned, channeled Camaros at the show, which is kind of weird because the process of sectioning a car is not exactly easy. Because of the extreme tuck to the side section of a second-generation Camaro, maybe all these builders are doing is trimming off a few inches from the bottom and raising the wheel openings up into the body a bit—we are not sure. But we do know that seeing three (or more?) of these was not expected.

These were everywhere, and emulate road racers’ habit of chopping off flares above the rockers—which we’re not quite sure why unless they’re trying to eliminate weight while still covering tire tread per rules?? Not sure—but it looks weird on street cars because we’ve been so used to flares tapering off as they wrap around a wheel opening, and this doesn’t lake a lot of sense.

Chrome and Polished Aluminum Are Dead

All of the pro-built cars at SEMA have done away with chrome and polished aluminum as finishes or accents in engine compartments. It almost seems taboo, and honestly gives the person looking under the hood a chance to actually take in the glory of an engine compartment without having to wear sunglasses and sun block.

It’s everywhere—but are we seeing better, more integrated design? In some cases no—and it costs the same to do a well designed part as it does an ugly one.

Satin is the New Chrome

Anything but chrome is the new chrome! It seems like builders are specifically avoiding chrome. Is it an environmental thing? A fashion thing? A hassle thing? Whatever, chrome seems to be dying a slow death at SEMA.

If It Don’t Go—Gash It

Ripped, gouged, and gored sheetmetal goes right along with patina as the new way to add a distinctive element to your vehicle. Whether preserving an element of an as-found part, or adding a vent in a dramatic fashion, we’ve seen many examples at SEMA.

Coming up with ever more imaginative, flamboyant, and elaborate ways to route your exhaust gasses on your turbodiesel setup, is the preferred path to success. These are just a few examples of the in your face approach to turbocharging your diesel.

As a way to engage admirers of your building prowess, and as a means to stand out in the massive SEMA crowd, you need to overthink and over-engineer your brackets, supports, and suspensions to confuse and delight the masses. At least that’s what it looks like to us.

Vents and body openings are everywhere—placed all over cars at SEMA. Even vents inside of vents have been seen here. We’ve got a whole gallery within a gallery of the rash of vents and openings bonked all over some of the cars of SEMA.

What started as a curious combination became a downright trend once we kept noticing that whenever a super-deep dish wheel was used, an exhaust tip running through the quarter panel accompanied it. It’s as if you can’t do one without the other.

Seen on three or four vehicles, the once high-grade woven material used for grilles has given way to cheap-to-buy, and cheap-looking grille material. Maybe the owner or builder ran out of money when they got to this part of the build? We’re not sure, but it’s a trend.

This was a trend last year we wrote about, and it hasn’t gotten watered down at all this year. Again we are seeing many, many examples of anodized aluminum wheels on a myriad of cars and trucks.

Wraps are getting so good that it’s getting harder to tell if you’re looking at actual paint or a vinyl wrap. Obviously when you get up closer you can tell, but walking through the aisles of SEMA you can easily be fooled by the well-done execution of some of the vinyl wraps we’ve seen.

When Did Rust Become Shiny?

At SEMA it can. Rust and patina buried in clear for different reasons was in abundance. Unfortunately it looks odd at best. Our suggestion would be to either keep your patina patina-ing, or paint it and be done with it.

We are finally starting to see the end of flat or semi-gloss paint. It’s still around, but seems to be slowly fading to instead become a same-color accent. Works for us.