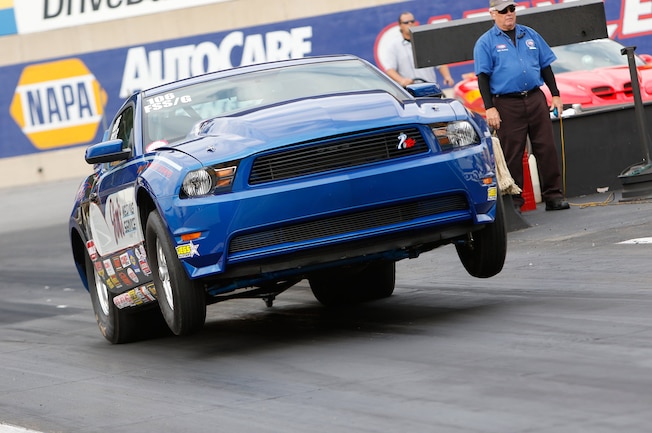 The roots of Sportsman drag racing can be traced to the Stock and Super Stock classes created in the late 1960s, and much of this muscle was on display at the recently held NHRA Pennsylvania Dutch Classic at Maple Grove Raceway. Stock and Super Stock provides the perfect stage for production muscle cars that are tweaked for maximum acceleration within a tight rule package and the results are thumping burnouts and hard, high-flying launches.

Many big-name races racers like Bob Glidden and Jack Roush made their mark running Mustangs in these classes, and the cars and stars are no less exciting today. The recent influx of factory drag cars has added to the existing brand rivalries and there is huge factory support to push these cars deep into the 8s. Today’s Cobra Jet Mustangs regularly see tough competition from the Chevrolet COPO Camaros, Dodge Drag Pak Challengers and the slew of original muscle cars that continue to compete.

The art of extracting every ounce of performance from factory combination lives on amongst racers, though more modifications are allowed when compared to the past. With this, Stock and Super Stock mixes heads-up and bracket racing, to give racers a variety of challenges. Performance is still king and there are literally thousands of combinations to pick from.

With four days in the cool October air, the NHRA’s Division 1 Dutch Classic provided, racers and fans with the ultimate drag racing experience. This year, Anthony Bongiovanni gave us the opportunity to climb behind the wheel of the Bongiovanni Racing, Micro Strategies-backed 2008 Cobra Jet Ford Mustang. We took advantage scoring a runner-up in Class competition. We appreciated the opportunity and had a blast running in the tough FS/A (Factory Stock/A) class. The CJ produced a best of 8.80 at 153 mph and was a thrill to drive. Bongiovanni had a fine weekend himself, scoring a class win his own 2014 Arrow Five Years Out-backed Super Stock Cobra Jet.

When not in the seat, we hustled around Maple Grove Raceway to capture the fast-moving Fords, muscle Mustangs and modified Mercs in competition. This was not easy considering we were surrounded by FoMoCo coolness at every turn.

Engine builder Jeff Lawrence ran low 9s with his 351-powered Saleen.
You won’t find many Foxes cleaner than John Cannata’s Super Stock GT/DA.
Don Fezell has one of the quickest and fastest cars in all of Stock Eliminator; the 2008 Cobra Jet ran in the 8.40s!
Anthony Bongiovanni drove in Stock and Super Stock and this is his 5.4L-powered CJ that runs 8.70s.
Bongiovanni also runs this award-winning Super Stock CJ, that packs a supercharged 5.0 Coyote and runs 8.30s.
Here we are, strapped to the Bongiovanni Racing Cobra Jet. We clicked of a bunch of 8.80 e.t.’s and made it to the FS/A Class final, but lost to Don Fezel.
“Rowin’” Ray Scardelli dipped in the 9s with his 289 Probe.
The view from our seat as we prepared to make a pass.
Richard Preiser’s 1967 Mustang runs in SS/AS and clocks 8-second elapsed times.