92 Competitors Duke It Out for a Chance to Be Invited to SEMA & the Optima Ultimate Street Car Invitational!

One More Roll of the Dice 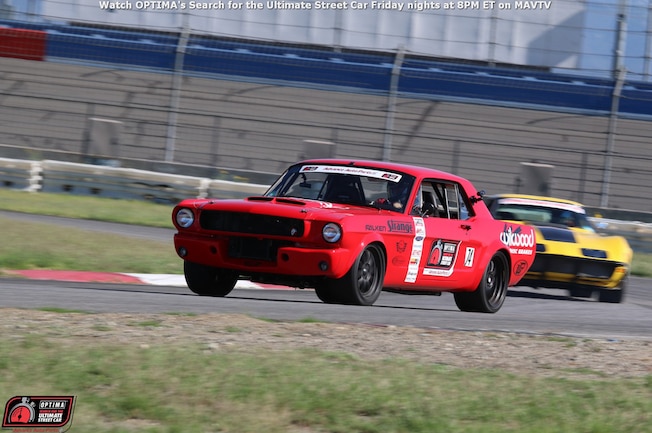 “What is the ultimate street car?” It's a question a lot of people have been debating for many years and OPTIMA Batteries decided it was time to give folks a chance to settle the argument. Born out of the SEMA Show in Las Vegas, the Search for the Ultimate Street Car series now visits nine tracks around the country, inviting qualifiers all along the way to attend the SEMA Show and compete in the OPTIMA Ultimate Street Car Invitational, presented by K&N Filters.

The final qualifying event of the year was held at Auto Club Speedway in Fontana, California on October 10th and 11th. The sold-out field was chock-full of hopefuls, looking to capture an invitation by winning one of four classes or at least picking up the needed points to secure a qualifying spot for the season finale. Five Fords have already qualified for the final event, but only one of the 13 Blue Ovals entered at Fontana was already in that elite group. Would more win their way in at Fontana or capture enough points in the season-long chase to earn an invite?

Check out the gallery for the answers and be sure to catch episodes of OPTIMA's Search for the Ultimate Street Car TV series every weekend on MAVTV (check local listings for air dates & times).

Alcino Acevedo makes regular appearances in West coast events and is proof that you don't need to spend big bucks to have a great time in this series. All in, he has well under $10,000 into his '76 Cobra II
Mike Maier officially has the best wife in the world. In anticipation of everyone's questions, we asked her and unfortunately, she does not have a sister.
Cliff Elliott's trailer wrap has now become internet-famous after his close encounter with a wall during the 2015 season. We're happy to report his '11 GT/CS has not only been repaired and upgraded, but he did well enough this season to punch his return ticket to the 2015 OPTIMA Ultimate Street Car Invitational.
Gregg Biddlingmeier's '88 Mustang is another great example of a car that hang with the big boys on a budget of less than $10,000. In a lightweight GTL class laced with all-wheel drive Evos and ZO6 Corvettes, Gregg's Fox body finished the season in 13th place out of 73 competitors.
Mike Maier punched his ticket to the SEMA Show and OUSCI early in the season, but used the Fontana event as an opportunity to dial in his '66 Mustang, while sizing up his potential competition in Las Vegas.
John Anthony came in a little hot on this pass in the Wilwood Speed Stop Challenge. He ended up placing 25th in the GTV class for this event in his rookie outing.
Shelby only produced 50 Candy Apple Red GT350H Mustangs in 1966. If you ever see another one, it probably won't be spraying dirt, like Randall Pond's did in his off-track excursion during the Falken Tire Hot Lap Challenge.
Even though Martin Pond's '80 Mercury Zephyr runs in the GTL class, there is still some sibling rivalry between him and his brother, who runs a '66 Shelby Mustang in the GTV class. Martin holds bragging rights on the season, having finished second overall in his class.
It was a mad scramble for Andrew Nier to keep his '12 Mustang on the track, but his efforts paid off. Nier received the coveted K&N Filters Spirit of the Event award, which included a very cool helmet form K&N and invitations to the 2015 SEMA Show and the OPTIMA Ultimate Street Car Invitational.