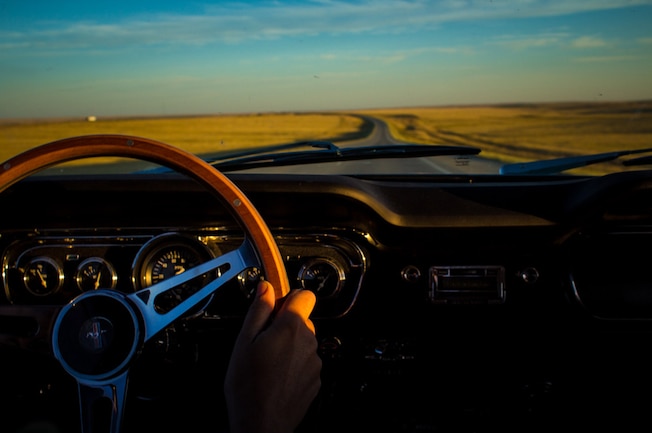 If you’ve followed the web and Facebook postings we’ve done on Project Road Warrior, our ’65 Mustang coupe, you’re probably aware that the car is finally road worthy! For its test-by-fire, we entered it into the Goodguys Road Tour that goes from Loveland, Colorado to Bowling Green, Kentucky. But first, we had to get from South Carolina to Colorado. After all, how better can you test a brand new car, where every single nut, bolt, and screw had removed at some point? With a 5,000-mile road trip across the country of course! Yes, we are insane!

The first step was to install all of the Team Mustang Girls sponsor decals (that’s how I can afford to do this) and add a fresh batch of oil at Classic Speed and Custom in Charlotte, NC, then it was off to Bowling Green to pick up our co-pilot, Austin Coop of www.2laneamerica.com. We also stopped by Holley.com for a quick tune of the Terminator EFI, where Robin Lawrence smoothed out the idle before we were off, next stop Colorado.

The trip went smooth for the first couple days. We made great time with the new 4R70W overdrive from PerformanceAutomatic.com and in two days found ourselves over the Colorado border. Everything went smooth up until... Saturday night, with a little over 100 miles to go the car started to surge at idle. It basically sounded like we were patting the gas like someone holding the rhythm on a drum but my foot was off the pedal. It was getting dark and I figured the car was just tired, like us, after running all day. We decided to find a hotel and start fresh in the morning.

Morning came and we checked all the fluids and connections and headed out for the Goodguy's show in Loveland, Colorado. The car started surging again but it was just at idle so I just figured it was something we could deal with. We arrived at the show and it was amazing—the typical Goodguys show, a hot rodder's dream with something for everyone. After walking around the show it was time for the drivers’ meeting at noon and then we were off. Unlike last year, with the stock 351W and non-overdrive C6 automatic trans, we were actually able to keep up with the other cars and it was awesome! But then the stumble returned, as we were traveling down the highway in a pack of hot rods. Luckily we were able to make our way across the five lanes of Denver traffic before the car cut off. I tried turning the car back on and she would go for just a few feet at a time before cutting off. We managed to hobble our way to a parking lot and call the trailer. The beauty of the Goodguy's tour is they have two chase trailers ready to pick up stranded participants. Last year I was lucky enough to make it the distance without making the call—this year I had the pleasure on the first day!

As luck would have it, right when Josh Henning of goolsbycustoms.com rolled into the parking lot the car started back up and sounded normal. Go figure right? We chalked it up to possible vapor lock and started back down the road to the next stop at the Vehicle Vault in Parker, Colorado. The collection inside was gorgeous and highly recommended if you’re in the area.

After finishing up at the Vault we hit the road and headed for Trinidad, Colorado but only managed to make it about 10 miles down the road before the car shut off again. I was racking my brain: clogged fuel filter, bad gas, loose wires, what the heck was wrong? I checked all the connections to the pump and they were happy but when you turned the key the fuel pump just made a sad noise. It was staving for fuel. Luckily Josh was nice enough to roll back to us, load the car up and get us to the hotel for the night. During the drive we discussed all possible problems and he determined that the high elevation and lack of ventilation on the fuel tank other than a pinhole in the gas cap was most likely the culprit. We got back to the hotel and after a great group dinner it was back to the car. Josh drilled a larger hole in the cap and removed the rubber seal, but the car was still running badly. After checking that the O2 sensor was working properly we moved on to the ECU on the Holley Terminator. Luckily Josh was familiar with the system and made some tweaks with his laptop and the car made it around the block and back on its way. Good thing he will be on the whole Tour because once we get back down in elevation the settings will have to be changed again.

Keep your fingers crossed because rumor has it we will be heading up in the clouds tomorrow, 10,000 feet. It should be interesting!