Goodguys Road Tour, Day 3: A little bit of ice and a few prayers and Project Road Warrior is conquering the open road like a champ! 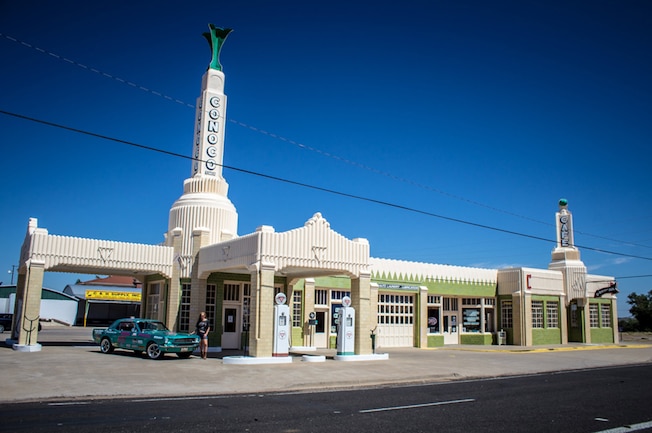 It’s day three of the Goodguys Hall of Fame Road Tour, and I am determined to have zero trouble with Project Road Warrior today! We’ve been dealing with vapor lock in the fuel system that makes the car stumble and shut off, and our redneck solution is to pull all the luggage, tools, and spare parts out of the trunk and stack big bags of ice on top of the fuel tank, to keep the fuel cool and out of vapor lock. So far, it’s working like a charm. My passenger and the guy behind most of the photos for this trip is Austin Coop of Two Lane America, who’s riding shotgun to cover the tour for his site and keep me from singing to myself.

Our first stop of the day was just outside Amarillo in the little town of Wellington, TX at Bob Owens’ Salvage Yard and Collection, a massive junkyard with every kind of car imaginable. It felt like a bit of a homecoming for the car and I, since I basically lived in junkyards while building the car the first time around and developed a love of the places. Some people want to go to the opera; take me to a junkyard instead! We also got a tour of Bob Owens’ personal shop, where we had lunch.

Austin knew about a great Route 66 photo op in Shamrock, TX, so we were able to get plenty of shots of Project Road Warrior at the Tower Service Station and U-Drop Inn Café—does it look familiar? It’s the inspiration for Ramone’s in the Pixar movie Cars! After stopping at the U-Drop Inn, it was back on I-40 toward Oklahoma City. The temperature had gone up quite a bit, so this was my chance to see if the bags of ice had done the trick while we drove to the Oklahoma Route 66 Museum. I’m happy to say the ice seemed to do the trick! After a full day of driving in the hot sun, Project Road Warrior may be leaking ice water but she ran great all the way to our final stop: Ted Davis’ Car Collection and Restoration Facility in Oklahoma City, which is filled with vintage cars, old Indy race cars, and all sorts of cool fabrication and manufacturing goodies.

Back at the hotel, we removed the old bags of ice and celebrated day three of the Goodguys Hall of Fame Road Tour, my first full day with no car trouble! Project Road Warrior is getting a true trial by fire, and she’s doing great so far with just minor new-car bugs. Try that with a TV Show project car! 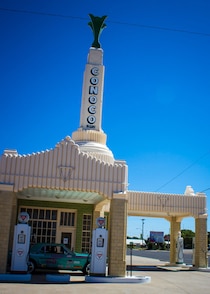 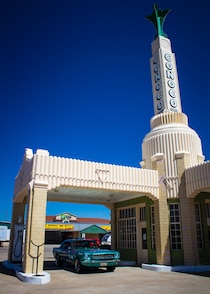 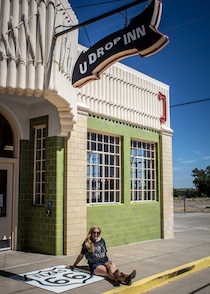