Day 4 on the Goodguys Road Tour with Project Road Warrior

Goodguys Road Tour, Day 4: Paranoia starts the day, but it was unfounded as Project Road Warrior performed like a true, well, warrior. 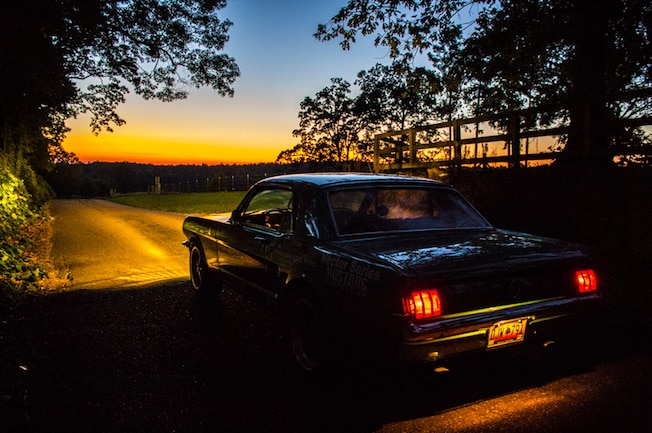 Day 4 of the Goodguys Road Tour started off in Oklahoma City. It was a long day with over 500 miles to trek so they skipped the normal drivers' meeting, and we were all free to leave on our own. The night before we discussed the beauty of sleeping in, but at 7:30am you could hear the engines starting to fire up, so it was no rest for the wicked!

After having a successful day 3, we were still a little weary of what may happen. You may know the feeling if you've ever been rear ended... the next week you are paranoid, constantly watching the mirror thinking someone is going to get you. I still wasn't sure if it was the adjustment of the fuel pressure regulator or the ice on the fuel tank that had made the day a success, so we decided to stick with the ice-in-the-trunk method because it had worked the day before and we didn't want to chance having anything go wrong on a long day. The first 100 miles or so we were just waiting for the car to a fail like a scared cat. The vision of the car on the trailer was still fresh on everyone’s mind. But as the day went on the speed increased and Team Mustang Girls and Two Lane America were once again enjoying Project Road Warrior without thinking that every noise meant failure.

As we were cruising along Route 40 we saw another classic Mustang approaching in the rear view mirror. It wasn't one that I recognized from the tour but the next thing I knew I heard someone say, "It's Team Mustang Girls" and asked us to stop at the next exit. We pulled off and had the pleasure of meeting Dana and Annette Bowers and their gorgeous fastback. It turns out they were on an 8,000-plus-mile adventure of their own across the country. After sharing a few travel tales, we were back on the road headed East and made great time, actually making it to dinner at 5:31, only a minute late. Anyone who knows our Team Mustang Girl style knows that that's a great achievement. Someone has to be last and it doesn't bother me one bit!

Dinner was at Phillips Grocery in Holly Springs, Mississippi. It was great to sit down with the group after a long day on the road and the food was spectacular. After an awesome dinner it was off to the main attraction for the day, George Poteet's farm. It was amazing. Gorgeous cars everywhere you looked and to top it all off, homemade cobbler and ice cream. Talking to such a legend you would expect to feel like a little goldfish in a giant pool, but in reality he and his family are some of the most warm and welcoming people you could ever meet.

I'm sad to say tomorrow is the final day of an amazing week on the road with the Goodguys. Luckily we have the Bowling Green Nostalgia Nationals to look forward to this weekend.