It’s Always Sunny in Florida: While the rest of the country froze, the Mustang and Ford scene was alive and warm in Silver Springs 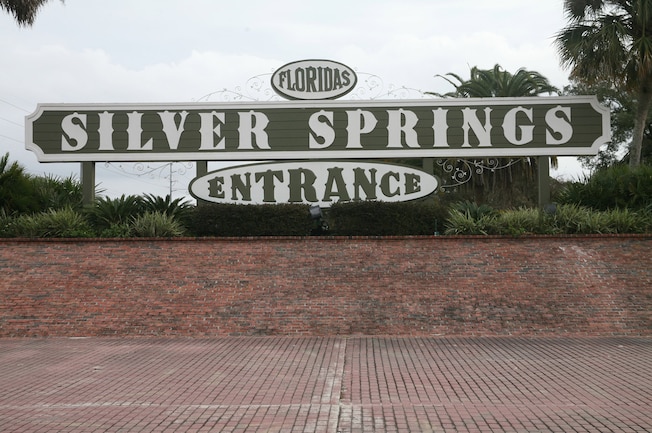 It was a brutal winter for a large part of the country, with tremendous blizzards and arctic-level temperatures that put any kind of automotive activity completely out of mind for a big percentage of Mustang and Ford owners. That is, unless you’ve affixed a snow plow blade to the front of your converted 4x4 Mustang! Although we’ve seen a Facebook photo of just that sort of shenanigans, other Midwestern and northern/northeastern street cars were forced to hibernate for the long cold winter. But not in Florida, where the first car show of the season dedicated strictly to Ford Motor Company vehicles took place on January 10-11, 2015, at Silver Springs, a state-run park near Ocala known for its natural springs, attraction-type rides, and low-hanging cypress trees.

This was the 21st year of the Silver Springs Ford and Mustang Roundup, presented by Rick Schmidt and his crew at National Parts Depot. While attendance was down a little bit due to weather forecasts that called for cool temperatures and rain, the show was nonetheless great again. The weatherman was wrong. The sun came out in the afternoon on both days, and only a minor misting was experienced on Sunday as the cars were leaving the park.

The Mustangs at Silver Springs were evenly split between early and late models. There were plenty of non-Mustangs at the show as well, from street rods to Fairlanes, Galaxies, and more. The nice thing about this show is its laidback attitude. As the organizers advertise, this show has “No judges. No tech. No ‘leave your top and windows up!’ No broiling on blacktop in a mall parking lot with nothing to do . . .” It’s a much more casual affair than the typical Mustang car show where professional judges look over every nut and bolt on the cars. The show was free for any 1993 or earlier vehicle, and only a $10 park fee for any 1994 or later vehicle. If you just wanted to walk around and look at the cars, it was only a couple dollars to park. And if your significant other or kids get bored, they could go for a ride on the park’s glass-bottom boats.

Schmidt is considering some minor changes to the show for 2016, such as making it one day instead of all weekend, but the 22nd Silver Springs Ford and Mustang Roundup will indeed happen, and Muscle Mustangs & Fast Fords will again be there to co-sponsor it. So make plans now to get the hell out of Dodge next January and travel down to sunny Florida to check it out. That’s much better than shoveling snow, right?

The cars were placed in semicircular rows facing the stage, which is where the participant-judged awards were handed out on Sunday.
Brooksville, Florida’s Brian Lyle brought out his 2010 Mustang with its unique blue and orange paint scheme.
The division was fairly evenly split between Fox-body and 1994-later cars.
Dan and Lori Aiken from Ellettsville, Indiana, brought out their 1979 Indy Pace Car Mustang, which they claim is No. 7 of 12 hand-built prototype Pace Cars built by Dearborn Steel & Tub and sold internally to Ford Motor Company for promotional purposes.
Bill Richardson from nearby Beverly Hills, Florida, brought out his sanitary 2007 Shelby GTH ragtop.
National Parts Depot’s Rick Schmidt has an amazing car collection, with an emphasis on historic and low-mileage cars. He brought out this display for the area in front of the stage.
This Mustang was the 300-millionth Ford vehicle ever built. In the background you can see its stable mates, the 100-millionth Ford (a 1979 Fairmont) and the 50-millionth, a 1959 Galaxie. ¬¬
The local Ford dealer brought out several 2015 Mustangs for people to drool over.
A small but valuable manufacturers midway included TMI, Scott Drake, NPD, Eaton Detroit Spring, Stainless Steel Brakes Corp., and Heacock Classic Insurance with their wares on display.
Mustang Monthly and Muscle Mustangs & Fast Fords cosponsored of the event. Billy Turpin was on hand to sign people up for subscriptions to the magazines.
Aaron Bickel noticed us taking photos of his yellow 2003 Cobra and begged us to put the car in the magazine. So here ya go, Aaron! His car was parked next to the Chadwick’s Triple Play car care products booth. That’s David Weber’s black 2001 Cobra parked third in this three-car lineup (we didn’t get the name of the owner of the suede green nitrous’d car in the middle).
Tommy Vincent (Sharpsburg, Georgia) had a certificate of authenticity from Ford Motor Company identifying his 1993 SVT Cobra as No. 2,056 of 4,993 built. It was incredibly clean and original.
Ever seen a 1985 SVO in this color? Tony Thompson’s car is the rare Dark Sage, one of only 34 in this color.
How’s this for a time warp? Frank Rene’s 1990 LX coupe with a polished Vortech takes us back a few years. Nice car.
Your author has a soft spot for the Mercury Mustang, the Capri, having owned one years ago. This ’81 belongs to Chris Wickham of Ocala.
What’s a Mustang show without a Shelby or Roush autograph on a car?
Mark Emerson had Cactus Jack sign the air box of his Grabber Blue 2013 Boss 302.
Fittingly, NPD’s booth was the busiest place on the grounds all weekend. NPD’s facilities are just down the street from the park.
5.0! 5.0! Run! Scott and Dawn Waszak had everyone nervous when they drove their 1993 former FHP Mustang onto the grounds, complete with dummy police radio, P.A., siren, front and rear strobes, wig/wag headlights, rear deck lights, and a driver-side spotlight.
Fast FHP, as they call the car, is “occasionally driven.”
Cassie King’s 2015 convertible led the contingent of yellow Mustangs, and was also Anna Schmidt’s pick as her favorite car of the show.
It’s not often you see a 2000 Cobra R. Ford only built 300. Darlene Robbins’ name was on the window placard, but the car belonged to a friend of hers, though we didn’t get his name. We caught him pulling out for the drive home to Jacksonville on Sunday afternoon.

A couple of times a year, the Lee Iacocca Award is given to people in the classic car community who have shown, over time, their dedication to the classic car hobby and who have done good work in supporting the hobby. The first award was given out at a Southern California show in 2006 by Jay Leno and Mr. Iacocca himself. As it entered its 10th year in 2015, Iacocca felt the time was right to make 2015 the last year for the award, which has been an important part of the Iacocca Family Foundation’s fight against diabetes. At the Silver Springs show, an emotional Rick Schmidt presented the Iacocca Award to his and our friend Tim Manes. Maines is a fixture at automotive events in Central Florida and is always willing to lend a helping hand. He has had some health issues the past few years but was on hand to accept the award while trying to hold back tears. Congrats, buddy! 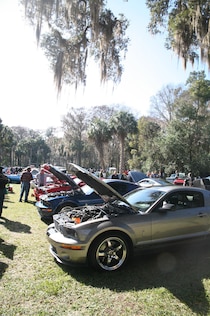 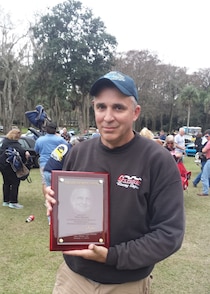 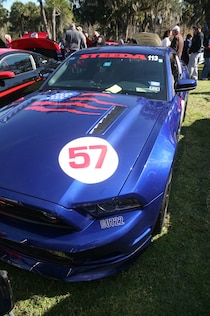