Mustangs vs. The World: Vintage Mustangs take on domestic and import supercars at the Optima Ultimate Street Car International 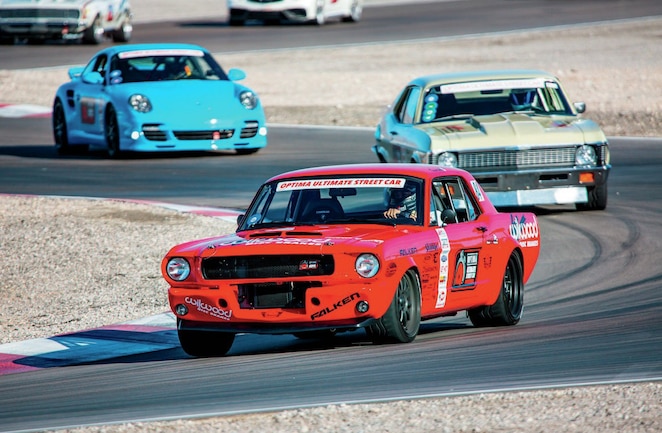 Perhaps the hottest segment in the hot rod and automotive aftermarket these days is the Pro Touring scene where people build their cars to not only look good and go fast, but to also handle like a slot car, throw you through the windshield under braking, and do it all in style and comfort. Mustangs are a big part of this scene, as witnessed at the 2014 Optima Ultimate Street Car Invitational (OUSCI) on November 8 and 9, the weekend after the enormous Sema Show in Las Vegas.

In case you’ve never heard of it, the OUSCI is the brainchild of Optima Batteries’ Cam Douglass and FM3 Marketing’s Jimi Day, as a place to make the top Pro Touring cars put up or shut up. There is a 10-race series throughout the year where entrants participate in three competitions: an autocross course, a speed-stop challenge, and on a road course. Points are earned at each of these races not just to try and win a class championship in the series, but also to qualify for the grand finale in Vegas. In addition to the cars that make it into The Big Show, Optima invites a handful of other cars right off the Sema Show floor to come join the fun.

Matt Dowd performed the driving duties for this ’67 Mustang coupe, built by Attebury Street Rods (ASR) in Grass Valley, California, shown here. No, your eyes are not deceiving you; it’s a righthand-drive car. It was built for Dino Rossi, who has dual citizenship in both the U.S. and Australia, as a prototype for a line of RHD Mustangs to export to Down Under. The original six-cylinder car now has a 465hp/450 lb-ft Roush 341 crate motor with eight-stack EFI, a TREMEC six-speed, and all ASR suspension. They finished it right before Sema and drove it to the show, then competed in OUSCI. With the typical new car bugs and zero time to sort anything out, the ASR coupe ran in the bottom half of the field, but looked damn fine doing it. We hope to bring you a full feature on this car soon.
Dave Tucci’s ’70 fastback in its best event, the Wilwood Speed-Stop Challenge. Tucci finished in 38th Place in this event, which requires a car to accelerate as hard as possible, negotiate a few cones, and then come to a tire-smoking halt without knocking down any cones in the stop box. The Mustang did that in 15.304 seconds, compared to that darn little Evo’s 13.773 time.
Total Cost Involved has jumped into the muscle car handling business in a big way, offering complete Mustang suspension systems that can transform a normal car into a rock star. This ’67 fastback is the latest out of the shop, and it features every trick TCI could throw at it, including shock travel sensors for data logging. They’re still sorting the car out, but Ed Moss was having fun beating the snot out of it (seen here on the RideTech Street Challenge Autocross), which is amazing since this thing is nice enough to win any car show it enters. This is another one you’ll see in Mustang Monthly soon.
The Optima Umbrella Girls were a nice distraction, and quite possibly caused a few spins and knocked-down cones.

The 2014 race saw some changes from years past. For one, it was moved from its former home in Pahrump, Nevada, to the Las Vegas Motor Speedway just a few miles north of town. Two, it has become a two-day affair whereas it used to all happen on a Saturday. This is due to a radical increase in car count, up to 103 vehicles registered for the 2014 event. And finally, the autocross course, which is normally limited to one car at a time on the course, was changed to two mirror-image courses with a car on each one simultaneously. They’re still racing the clock, not each other, but it’s much more fun to watch. These changes have helped the OUSCI evolve into a spectator event, and roughly 1,000 people streamed through the gates to watch the insanity.

Yes, there was a handful of high-quality vintage Mustangs battling it out and we bring them to you here. The bad news from our standpoint is that the event allows supercars like Lamborghinis, Porsches, Corvettes, Vipers, and more, and that makes it very difficult for any ’60s or ’70s car to compete. Really, regardless of how much has gone into it, how can a ’65 Mustang compete with a 1,000hp, all-wheel-drive Nissan GTR or a fully prepped Porsche GT3? We’re not the only ones lobbying for a pre-’80 class, so we’ll have to see what happens.

Regardless, the idea is to have a good time thrashing your hot-rodded Mustang at the track and seeing how it does against some of the top streetable machinery in the country. If you don’t have a car that can qualify, do yourself a favor and make it out to one of the events in 2015. It’ll be worth the trip. Check out DriveUSCA.com for more information.

This month’s cover car is the Wilwood Workhorse, which was hot after it was at the Optima Shootout. It came right out of Wilwood’s Sema Show booth and onto the track, so like some other cars here, there’s much more in it with some fine-tuning. Its best event was the autocross, where it ran 45.606 seconds combined time (right and left courses combined), whereas the winning Mitsubishi Evo ran both courses in 40.85. Here it is besting a Nova and Porsche on the BFGoodrich Hot Lap.
Hal Baer, founder of Baer Brakes, has owned this ’69 fastback for decades and entered it into the OUSCI, and is seen here leading the cruise of the Optima cars in front of the convention center just after the Sema Show came to a close. Issues with the car kept it out of competition, unfortunately.
This shot of Matt Dowd’s car shows the mirror-image setup of the autocross. The cars aren’t really racing against each other, rather they’re racing the clock, but it provides a better visual about how cars are paired with each other.
By far the best performing of any of the vintage Mustangs at OUSCI was Mike Maier’s ’66 Mustang coupe. The car was running with the top dogs all weekend, finishing Ninth in the autocross, 12th in the road course, and 18th in the speed-stop challenge. Remember, that’s with 103 cars, many of which are expensive foreign exotics. Not bad at all for a lil’ old ’65 coupe.
After Saturday’s on-track action, the OUSCI held the Detroit Speed Road Rally Challenge, which ended with the Showtime Motorsports participant reception at the new Shelby American headquarters in Las Vegas. Here’s Tucci’s ’70 fastback (with Dowd’s ’67 coupe and TCI’s fastback barely visible) parked amongst the enemy.