Mustangs at the 2015 Detroit Autorama 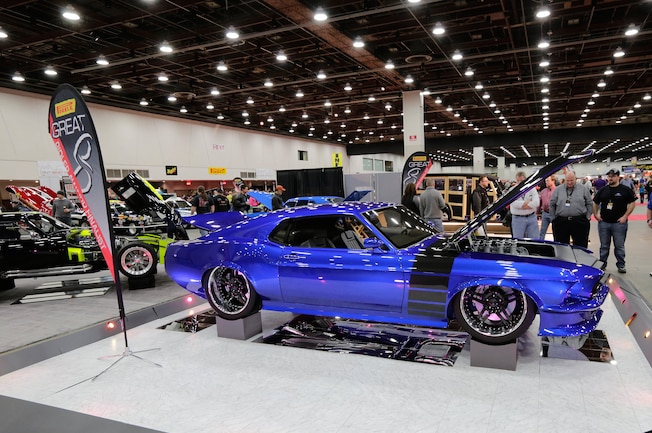 This winter has sucked! A good portion of the country has been under the spell of cabin fever, forced indoors by bitter cold and seemingly endless snow for months now. But there’s that one special weekend in the beginning of March when, for automotive fanatics, there’s a light at the end of the tunnel. With spring officially mere days away, it won’t be long until the hibernation period for the midwest’s best Mustangs will be over, and to prime everyone for springtime cruising in one of the hardest hit areas in the country, Detroit, comes the 63rd Annual Mequiar’s Autorama presented by O’Reilly Auto Parts. We came to check out all the classic ponies from mild to wild, pro touring to chalk mark-resto and everything in between, and we weren’t disappointed.

The Detroit Autorama is host to some of the nation’s finest new rides, as-well-as never before seen builds competing for the coveted Ridler Award. The road to the Ridler is paved by the Pirelli Tire Great 8, which is the top eight custom vehicles of the show that meet the Ridler criteria. This year, the bar was raised yet again with one of the most diverse fields we have seen in some time and Fords were well represented in the group, including a stunning 1969 Mustang dubbed “Stampede” by GAP Racing of Houston, Texas. Due to the massive crowds around the car, Mustang Monthly had to wait until the end of the show to bring you uninterrupted views of this steed. While the judges from the Michigan Hot Rod Association had the arduous task of determining the winner of the Ridler (which ended up being Don and Elma Voth’s The Imposter 1965 Impala built by Chip Foose), we’ll take you on a tour of the Mustangs on display here in downtown Detroit’s Cobo Hall. Check out the gallery for all of them.

Our pick of the show would definitely be Gap Racing’s “Stampede.” This 1969 SportsRoof has been widened in the rear by 2.5 inches and the carbon fiber front fenders were made 1.5 inches wider. All this to fit the 20x10 front and the 20x12 rear Rushforth Wheels. A massive Boss-headed 572 cubic-inch Ford engine, fed with stack injection, is under the hood of this incredibly detailed Mustang, which is well deserving of the Great 8 distinction. 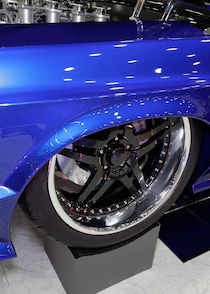 Sean and Lou Ann Ripp brought their Red Fire Metallic 1965 fastback to Detroit all the way from Sackets Harbor, New York. This mild but stunning restomod has the original 289 cubic-inch small-block that has been updated with Jim Inglese 8-stack Weber carburetion.

This 1967, Kenne Bell-supercharged, 4.6-liter four-cam, Shelby-inspired Pro Touring Mustang is owned by Amy Mimic out of Knoxville, Tennessee and built by B Rod or Custom. Stance comes way of a B Rod or Custom chassis featuring Chris Alston Chassis Works components. The American Shelby wheels, wearing Nitto rubber, brings the whole package together.

Auctions America had the “Shorty” on display in Detroit this weekend, which is due to go on the auction block at the end of March 2015. The 1964½ Mustang was a study in design by Dearborn Steel Tubing Company. The chassis was shorted 16 inches, giving it the unmistakable long nose-short deck look. Ford Motor Company recognizes it as a factory prototype. This is the first time this car has been available to purchase in almost 50 years.
Dan Gingiloski of Melvin, Michigan brought out his factory original yellow 1970 Mach I. One of the 13 produced in this color combination, his is the only one built with a convenience group package.
Al Marani terrorizes the streets of Southgate, MI in his 1968 Shelby Mustang. Power comes from a Boss Hemi with a blower. The 6-71 puffer has been gutted and rebuilt with 8-71 components. With a mild cam and street tires, this combination makes a little over 1,000 horsepower and Al tells us that the car does 9.90’s in the quarter-mile.