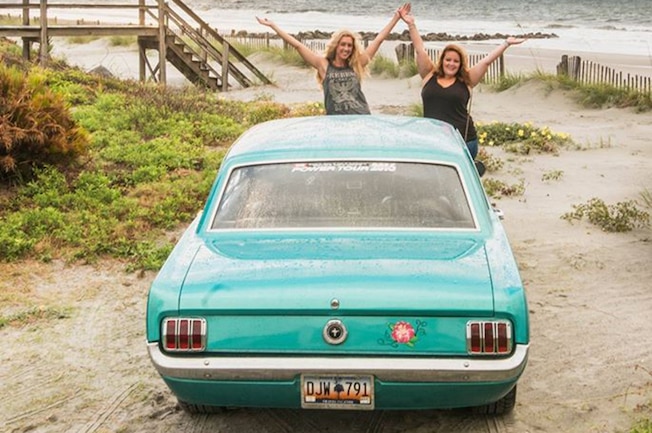 Perhaps the greatest draw that we have to our beloved Mustangs, or any form of automotive transportation really, is the freedom they offer. At any point, when the going gets rough and you just need to get away, our trusty steeds provide an escape from the mania of daily life, for days at a time or even a precious few minutes. There’s nothing like time spent behind the wheel, clearing the relentlessly worried mind from the clutter of the daily grind, enjoying the sound of tires on pavement, engine humming away under the hood, and scenery passing by the open windows as the wind blows through your hair.

Road trips in our hot rods are food for the soul, especially when you have the mindset that the adventure is about the journey, not necessarily the destination. This pretty much defines Courtney Barber and her passion project, Team Mustang Girls. When we first met her, it was in the right seat of her turquoise 1965 Mustang coupe on the road to the 50th Anniversary celebration of the Mustang in Charlotte, North Carolina, and we understood right away what the woman was all about—her Mustang, her dog Roxie, her close-knit group of friends, and the open road. And it became obvious that her Mustang would be the perfect canvas to illustrate how to build a kick-ass Mustang that can also handle the long and winding road on a long-term basis. So we turned it into Project Road Warrior (PRW), and followed along as Courtney completely rebuilt the car in the pages of Mustang Monthly magazine.

In the year since completing the project, Courtney and PRW have already driven to Las Vegas for the SEMA Show, completed the Hot Rod Power Tour, the Goodguys Road Tour, a Rally North America event, and several more Carolina-area road trips, racking up about 35,000 miles on the car in just under a year. But those all pale in comparison to her latest trek, from the coast of South Carolina all the way to Anchorage, Alaska to participate in another Rally North America event—then all the way back to South Carolina…driving the entire distance.

The trip will encompass roughly 15,000 miles, and the plans are to stop at whatever scenic sites she comes across. She’ll be bringing you occasional updates from the road along the way, right here on Mustang-360.com and also on our Facebook page when the mood and situation strikes, and you can follow the progress of PRW, Courtney, and her co-driver Amie Williams on Glympse at http://glympse.com/OFZJ-PMXX.

These photos were taken Thursday morning, August 11, from Folly Beach, South Carolina, the start of the journey, and as we write this they’re just crossing into Indiana from Kentucky. Follow along, and wish them luck. And if you have suggestions on places they should stop and check out, let them know on our Facebook page!