Charlotte and Vegas brought in thousands of enthusiasts for the Mustang 50th birthday celebration. 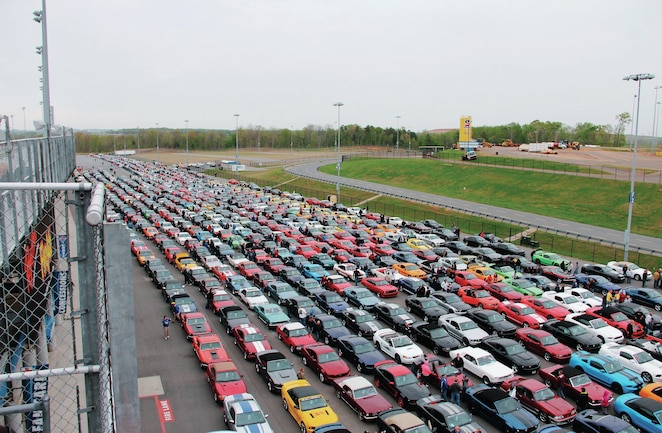 It's hard to believe that our favorite Pony car has spent 50 continuous years on the road. What better way to celebrate than with two huge simultaneous events, held April 16-20, on each side of the country—Charlotte Motor Speedway in Concord, North Carolina, and Sin City's very own Las Vegas Motor Speedway.

Enthusiasts have been amped about the Mustang 50th Birthday Celebration since first catching wind over a year ago. On top of the dual festivities, Mustangs Across America (MAA) played host to a seven-day journey, open to any Mustang owner willing to drive across the country from Los Angeles, California, through 10 states, to the final destination in Concord. And so, Mustang enthusiasts from all over the world poured into Charlotte Motor Speedway and LVMS on April 16 for the Mustang 50th Birthday Celebration.

Part of the Mustang-360.com crew made the 10-hour trek from flat Florida to the hills of North Carolina to take part in the birthday festivities, while others flew in from Manhattan after a Mustang party atop the Empire State Building. The remainder of our team joined the party in Vegas.

As we rolled into town the night before the official festivities were scheduled to kick off, Mustangs of every color and generation filled the streets and surrounding parking lots, giving us insight into the expansive crowds attending this event.

Thursday morning was a celebration all its own, with the unveiling of the highly anticipated special Mustang, the limited edition '15 50th Anniversary Mustang, which was presented by none other than Bill Ford Jr.. Among the crew on hand was Dave Pericak, chief Mustang engineer; Jamie Allison, director of Ford Racing; and Mark Fields, chief operating officer and soon-to-be CEO of Ford Motor Company.

In addition to the show, many Mustangs hit the speedway for open-track fun. This Boss 302 was rocking a Wood Brothers' theme.

We also participated in the Friday-night cruise, which was one for the record books, literally. With 621 Mustangs holding the previous cruise record, the Guinness Book of World Records was on hand to tally up the herd of Mustangs participating in the cruise from Z-Max Dragway in Concord to the quaint little town of Kannapolis—about a 35-minute cruise through scenic back roads.

Taking a look down at the Mustangs staging for the cruise from Z-Max Dragway grandstands, it was obvious that the record would easily be shattered despite menacing rain clouds overhead. While we weren't given an exact number after many attempts to reach an accurate count, it has been confirmed that the record was broken by a couple hundred, which makes for 850-plus Mustangs cruising in one continuous convoy.

Steeda Autosports presented a nice display with a few of its Mustangs, including the famous No. 47 '93 Cobra R.
NPD also had a few Stangs in its large display. Shown here is the first VIN Fox-body Mustang.
We also had the chance to chat with Gale Halderman, the man credited with designing the very first Mustang.
Iconic Cobra Jet racer Hubert Platt was on hand with his '70 drag racer.
Ford's brass was heavy at the 50th …
MMD showed off its heavily modified GT, which recently graced our cover.
Mark Fields, the current COO of Ford and future CEO, is seen here with Jim Owens.
Ford Racing's John Clor was a big part of the opening ceremonies. Clor also gave a presentation, as did many of the Mustang dignitaries.
Ford used the event to unveil its 50th Anniversary special-edition Mustang. Mustang Lead Engineer Dave Pericak wheeled the 5.0, with Bill Ford Jr. riding shotgun.
Bill Ford Jr. addressed and then mingled with the crowd. His enthusiasm for the Ford brand is genuine.

Enthusiasts from near and far flocked to the speedway to show off their pride and joy, stock up on Mustang apparel and parts, catch up with old friends, make new ones, talk to industry greats, and of course, enjoy parade laps around the prestigious speedway.

At the track, we caught up with auto legend Steve Saleen and received a personal tour of his massive booth, complete with mini-museum. We jumped over to Roush Performance and talked to race car drivers Jack Roush Jr. and Chris Buescher. Dario Orlando from Steeda was in attendance, as well as Formula Drift champ Vaughn Gittin Jr., who caught a red-eye flight from celebrating with fans in Las Vegas.

We toured Daniel Carpenter Mustang Reproductions (also in Concord) and found a jaw-dropping collection of low-mileage, original Fox Mustangs. This is a must-see for any Fox fans.

While browsing the Speedway's infield, we came across almost every Mustang model ever built, from rare gems to daily driven warriors. Among the elusive included the classic Boss 429 (that tops the wish list of many) to Shelby Super Snakes, from unrestored classics to the Mustang IIs, and everything in between. We brought Project Hypersilver Fox-body, which grabbed massive attention inside the National Parts Depot (NPD) booth.

Not letting the dreary rain dampen our parade Saturday morning, we hit up Daniel Carpenter Mustang Reproductions, maker of original Ford tooling and reproduction parts, and took a tour of the facility. While there, we browsed Carpenter's extensive and impressive vehicle collection.

The Mustang 50th Birthday Celebration attracted enthusiasts from all around the world. Here is the Mustang Club of Italy. We also ran into folks from Brazil, Germany, Canada, and a few other countries.

Saturday night marked the Mustang Club of America (MCA) banquet at Embassy Suites host hotel, where hundreds of people sat down to speeches put on by industry icons. Steve Pruitt, MCA president, took to the podium; soon after, Steve Saleen made us feel nostalgic with his video showcasing his many years as a driver and auto creator.

We also heard a few words from John Clor; Gale Halderman was presented the Lee Iacocca award by Rick Schmidt, president of National Parts Depot (NPD). Last but not least, Dave Pericak took to the stand and handed out a few goodies and then laid down a very important piece of information—the new 2015 Mustang GT will come standard with line-lock!

Editor Smith's high-school friend Seth Shimansky stopped by the event; as soon as it ended, Seth drove to a Ford dealership and picked up a '13 Mustang GT convertible. It's safe to say the Mustang bug is contagious.

On Sunday, it was time to wrap up the weekend and say goodbye. We made our final rounds at the track, and at 2 p.m. on Easter afternoon, we loaded up Project Hypersilver and hit the road for the long haul back to Tampa.

It's events like these that really make you realize how tight-knit and accepting the Mustang community really is. It's crazy to see that many people's lives have been touched by or revolve around this one car. But it's not just a car. It's a lifestyle shared by millions and a passion that goes back generations.

So Happy 50th Birthday, Ford Mustang! Here's to another 50 continuous years on the road.

This ’70 Stang was one of more radial, sporting a Ford GT powertrain!
Kevin Lunn's Regatta Blue LX was near and dear to editor Smith's heart, as his '87 5.0 LX wore the same hue.
There were dozens of Saleen Mustangs. Two of our favorites were the wide-body and Ed Hinker's drag Saleen.
Of course, Ford's display was packed with examples of every body style, and a few people walked away with a little collector item.
Steve Saleen presented a wonderful speech at the MCA banquet, and also signed posters and dashboards all weekend.