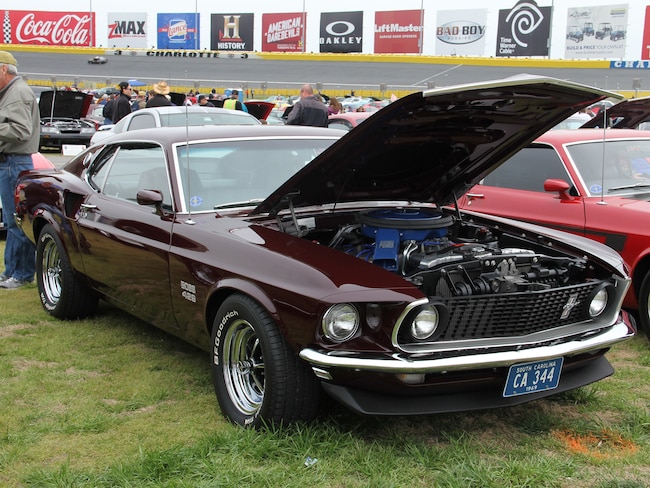 The Mustang 50th Birthday Celebration held at Charlotte Motor Speedway was insane to say the least and with thousands of Ford Mustangs in the general vicinity, it was hard to pick just ten cars for my top ten. The event took place from April 16 – 20, 2014 and it was jam packed with horses of all different colors, shapes, sizes and generations.

Some of the Ford Mustangs on this list are stock and some are heavily modified. I seem to embrace the builds that the traditional enthusiasts might shake their fists at. With that said, here is my top ten in no particular order.

I may be biased but for those who know me personally, I have a tremendous soft spot for the color Sonic Blue, especially the ‘03 Sonic Blue SVT Cobra. The ’03-’04 SVT Terminators are one of my all-time favorite Mustangs and I just can’t pass up a clean SB Cobra by any means.

Sonic Blue was only offered on the SVT Cobra for one year – 2003. Is it rare? No, not really. It’s just a super sweet car.

So maybe color matters to me a little bit. This gorgeous red hue on this ’14 Saleen Ford Mustang -- Lizstick Red -- is so deep that it looks as if it is dripping paint off of that pristine S197 body. The name LizStick Red was named after Steve Saleen’s wife, Liz Saleen. 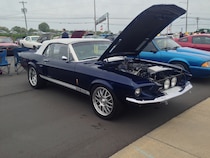 As much as I love the traditional muscle car, I also love builds that bring something different to the table. Some might consider it blasphemy to mix the likes of two completely different eras while others might embrace the build if its in good taste.

So, how does this classic Shelby GT500 stir the pot? It is powered by a modern supercharged 4.6L SVT Cobra motor known as the Terminator. See number 10.

We’ve thrown Rob Rabon's S197 Ford Mustang GT up on MM&FF’s Facebook page a time or two where it received mixed reviews. While people believe it is a vinyl wrap, it is actually sprayed head to tail with chameleon-like Plasti-dip. What's fun about the Plasti-dip "paint job" is that if you get sick of the color, peel it off and spray on a new hue and Rob changes his up quite a bit.

While riding on airbags does not settle well with hardcore traditionalists, many don’t realize that bags are adjustable and can be lifted and lowered to preferred ride height.

If you have the 2014 AmericanMuscle.com calender, the matte blue bagged Mustang is this same exact car.

In October of 2013, only one month was given to this stock 'Stang to get ready for the SEMA show. This Mustang build was documented in stages. It features air lift suspension, White Matte finish, MMD pre-painted parts. In Stage 3, the guys installed a black-finish V-3 Si supercharger kit bumping the MMD Mustang up to 589rwhp and 480 lb-ft of torque on 8 lbs. of boost.

What's awesome is that you can win this car. Americanmuscle.com and MMD are holding a sweepstakes. Enter here.

Another car that might have those same traditionalists shaking their heads in disbelief is this sweet Ford Mustang -- a chop top ’69 fastback, or as the license plate says “69CHOP1”. If you think the roof line is a bit off from a factory fastback, you are correct. There has been a 211/44-inch chop out of the roof with the surgery performed by Jim Voorhees of Lake City, Minnesota.

After researching the Chop 1 online, this car has participated in a few Hot Rod Power Tours.

Here’s something you don’t see every day, a “Roush Tribute” Fox-body. Using the original factory Performance White paint and 5.0L engine with goodies, this Fox-body owned by Jamie Marsh of Indian Land, South Carolina stepped his hatch up a notch. Get it?

While I didn’t get to speak with the owner, there was not a blemish on this four-eyed Saleen Fox-body. Painted a beautiful Dark Sage Green, I had to add this to my top ten.

One badass car that came straight from the factory is this 1969 Royal Maroon Boss 429 Mustang. These Mustangs were developed for NASCAR to compete with Chrysler's Hemi 426 in what is now the Sprint Cup Series.

The body of the factory Boss 429 had to be modified to fit the massive power plant so Kar Kraft from Dearborn, Michigan was hired to modify the existing 428 Cobra Jet and Super Cobra Jet Mach 1 Mustang.

Some people may recall the classic ‘69 Mach 40, the mid-engine Mustang that graced SEMA’s showroom floor a couple years ago.

Here is yet another mid-engine classic, this one sporting “Ford GT” across the rear. The amount of work put into such a ride is no joke, and sure, it’s not your normal run-of-the-mill classic ‘Stang, but it is super impressive to say the least.

The 2015 Limited Edition Mustang had to be included in this list. It's the first time I've seen the '15 in person and to say the least, I was blown away. This anniversary edition featured layered-glass window louvers and chrome bezels around the tail lamps. This beast was just a beauty to behold and I couldn't leave it out.

So, there you have it. There's my list from the Mustang 50th Birthday Celebration in Charlotte. I don't expect everyone in attendance to agree with this top ten and to each their own.