Recreating History For the 50th-Anniversary Celebration

The Ford Mustang is turning 50 years old next month and a multiple-city celebration will soon be in full swing. Adding to the excitement, Ford Motor Company just announced the plan to recreate a scene that played 50 years ago involving the 1965 Mustang convertible prototype and the 86th-floor observatory of the Empire State Building. It all started at the 1964 World’s Fair in New York.

“New York is one of the greatest cities in the world, and it’s the place where the Ford Mustang story began 50 years ago,” said Mark Fields, Ford chief operating officer. “We’re thrilled to be visiting the architectural landmark that has been the heart of the Manhattan skyline for 83 years with the newest generation of the car that is the soul of Ford Motor Company.”

Back in the 60s, the Empire State Building was the world’s tallest skyscraper towering over overly-populated streets of Midtown Manhattan. Placing a car at the top of the largest building is no easy task and the only way to get up to 86th-floor observatory is through the elevators. Helicopter delivery is not an option due to the narrow deck and no crane could reach the 86th level.

So, how did they fit a full-sized ’65 Mustang inside of an elevator? They sliced the car into three main pieces along with the windshield so that the sections could easily fit inside of the elevator separately. The hard part was putting the car back together without any visible scars.

“Like all good craftsmen, our team is measuring twice and cutting once to make sure we can get this Mustang up in the elevators,” said Dave Pericak, Mustang chief engineer. “Like the team that did this in 1965, the current crew visited the Empire State Building before starting and took careful measurements of its new elevators and doors before cutting up the car.”

Now the scene will replay 50 years later with the all-new 2015 Ford Mustang convertible. After measuring, the new Mustang is seven inches longer and four inches wider than the previous Empire State Mustang. Going off of computer engineering data, the team has figured out where to make the cuts. After the new Mustang is chopped up (cringe), it will be placed on rolling carts and brought up to the 86th-floor observatory. Once the pieces reach the top, technicians will only have six hours to put the car back together.

“It is a privilege to celebrate the new Ford Mustang, to bring together our two iconic brands, and to make new history with Ford,” said Empire State Realty Trust Chairman, President and CEO Anthony E. Malkin. “The Empire State Building and Ford Mustang are both historic innovators – today, as in the past.” 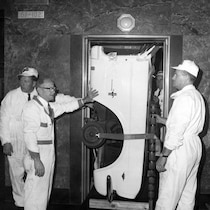