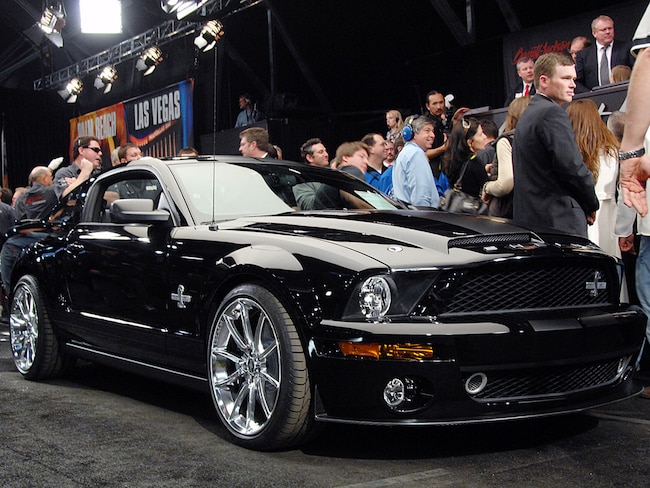 Recently the first retail 2015 Ford Mustang GT crossed the auction block at Barrett-Jackson Scottsdale and many wondered if it would be one for the record books. While it did sell for a whopping $300,000 supporting the Juvenile Diabetes Research Foundation, it still wasn’t enough to crack the list of the top ten most expensive Mustangs to ever go to auction.

The 1965 Shelby GT350 is a sweet car no doubt, but this one brought in a little over half a million dollars at auction. What’s so special? This particular Shelby GT350 was a prototype fitted with a Paxton/McCulloch supercharger good for 306hp, the one and only supercharged ’65 GT350. Starting in 1966, the supercharger became an option.

One car that tops many wish lists is the vintage Boss 429. While restored versions can be found at car shows across the country, a completely original Boss 429 is a different breed bringing in some big bucks. This example that sold for $550k in Monterey included the original window sticker and plastic wrap on the steering wheel. Not only does it have all of the original parts in mint condition, less than 1,000 miles have accumulated on the odometer since its 45 years in existence.

After a hiatus of nearly 40 years, Ford Motor Company teamed up with Shelby Automobiles to bring back the Shelby GT500KR for the 2008 model year. Unveiled at the New York Auto Show in 2007, the car was extremely limited with only 1,000 to be produced with an impressive 540hp. The very first ’08 GT500KR crossed the Barrett-Jackson stage to raise money for the Juvenile Diabetes Research Foundation (JDRF) bringing in $550,000 for the charity, making the total $1.8 million raised for JDRF so far.

One Boss 429 went for an incredible amount raking in $605k at Barrett-Jackson in Scottsdale back in January of 2007. Being one of the first 50 Boss 429s built by hand, it features a rare 820-S NASCAR engine with special Ford C9AE-A heavy-duty half-inch bolt rods, forged pistons, and steel crank among many other factory options. Many of these cars were built the same, except for some of the early cars said to be more collectible, holding more history with two different drivetrains. That could explain why this Boss 429 sold for so much.

Over 300 individual parts with over 800 pieces are needed to complete a 1969 Boss 429 making them very expensive to build by hand. To meet NASCAR rules, 500 street cars had to be built [to be eligible for racing]. Concours restoration was done by Meyers Cars under Ed Meyer, SAAC head judge.

For the 2007 model year, Shelby decided to bring back another moniker, the Shelby GT500 exciting Mustang enthusiasts everywhere. With the legendary Carroll Shelby putting his name on this new Mustang, it brought big-block performance and that old school attitude to the modern S197 platform. The first retail Shelby GT500 sold for $648,000 at Barrett-Jackson Scottsdale in January of 2006 with all proceeds benefiting Carroll Shelby’s Children’s Foundation.

Listed in Mustang Monthly as one of the “Top 10 Dream Cars” to own, Carroll Shelby’s personal 1969 GT500 Convertible sold for an amazing $742,500 at Barrett-Jackson Scottsdale back in January of 2008. The man himself owned this car since it was brand new. Shelby restorer Jim Cowles gave this beauty a 5-year Concours rotisserie restoration back in September of 2007.

This Shelby GT350R, originally owned by Richard Jordan, was sold with less than 4,900 miles on the clock and still maintains the original engine and transmission. It raced in Midwestern SCCA national events back in the early 1970s and was put into storage in 1986. The original Shelby American paperwork such as the invoice, titles, and racing photos are still intact.

After the remake of Gone in 60 Seconds hit theaters, Eleanor soon became a household name even beyond car enthusiasts. Everyone knew the name Eleanor and the car quickly shot to the top of many wish lists. Several cars were used in the film, but this car in particular was used in close-ups in the movie with actors as well as the movie poster. Selling at a whopping $1.0 million, it is obvious the impact that the movie and car had in the automotive industry. We brought it to you here.

Topping off the most expensive Mustang sold on the list is this rare gem – a ’67 Shelby GT500 Super Snake, which sold for an insane $1.3 million. Tucked in the engine bay is a 427ci V-8 used in Ford’s GT40 race cars. Used to test Goodyear’s “Thunderbolt” tire line, it did so with a top speed of 170mph. The plan was to produce a limited number of these cars, but with $8,000 price tag, it cost more than a Shelby 427 Cobra at the time which discouraged buyers from purchasing one. This initial test car was the only one built, making it the rarest of the rare and the most sought-after Mustang.

This newly-restored Shelby could have easily topped our list of most expensive Mustangs ever sold with the highest bid reaching $1.8 million. Being one of the only prototypes to beat the odds of meeting the crusher, the bid wasn’t enough to meet the reserve price and it will now stay with its original owner until the next auction cycle.

With EXP standing for Experimental, this Shelby is powered by a 390ci V-8 known internally as the Green Hornet. It went under the knife for some upgrades where it received experimental fuel injection, unique disc brakes, and independent rear suspension.