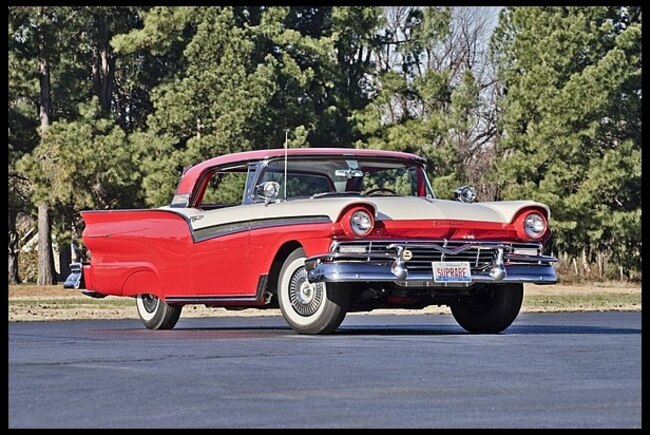 A rare gem is about to pass through the Mecum auction in Kissimmee, Florida – a ’57 Ford Fairlane 500 F-Code Skyliner (Lot S159). Only 20 F-Code supercharged Skyliners are known to exist today and this beaut claims number 11.

From the 20 out there today, there are only two cars known to have the 3-speed manual transmission with overdrive making this an extremely rare car indeed. It’s no joke with its Thunderbird McCulloch-supercharged V-8 engine capable of 312 horsepower and 300 lb-ft of torque.

In 2000, this ultra-rare Fairlane 500 Skyliner went under the knife for some frame-off restoration by Jerry Miller of Jerry’s Classic Cars located in Springdale, Arkansas. Painted bright Flame Red and contrasting Colonial White, its lively two-tone also runs rampant throughout the interior.

This Fairlane Skyliner is equipped with Ford’s Safety Package inside, which includes a Magic heater, Town & Country radio, day-night rear view mirror, tissue dispenser under the dash, padded visors, and a padded dashboard.

Read Mustang & Fords Magazine for a feature on John Hicks' red and white '57 Fairlane hardtop, a car that rekindles the past and embraces the present.

Check out this 1957 Ford Fairlane Sedan. It'll take you way back into the glorious 50's! Read more at Mustang & Fords Magazine.