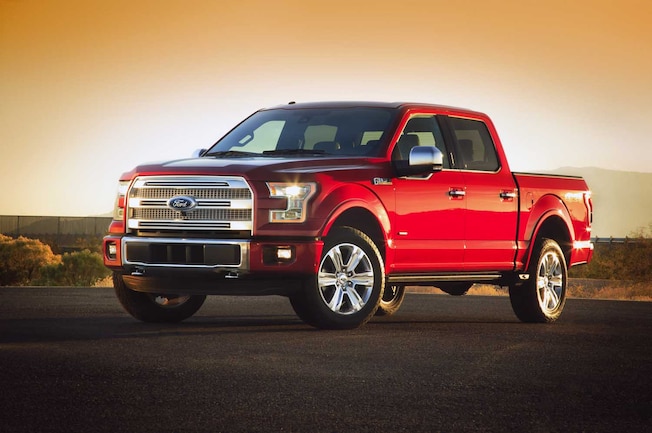 A new standard has been set for trucks everywhere now that the 2015 Ford F-150 has just been revealed at the 2014 North American International Auto Show in Detroit. Ford claims that this new F-150 is the smartest and most capable truck to date. America’s best-selling truck of 37 consecutive years just got better.

An almost-clone of the Atlas concept revealed in Detroit this time last year, the new F-Series truck is 700 lbs. lighter than its predecessor with high-strength aluminum-alloy components including the cab and bed.

The super strong military-grade aluminum is less likely to corrode and is just as dent and ding resistant as previous models. The same aluminum-alloy is already used in aerospace, commercial transportation, energy and in many other industries.

Below the aluminum-alloy body is a high-strength steel frame that is stronger than many competitors’ truck frames and has logged 10 million miles of testing in the Baja 1000 race with the 2.7L EcoBoost engine under the hood – one of four engine options available.

The smart side of the truck includes 11 new class-exclusive technology features. New to the 2015 F-150 is a 360-degree camera view, loading ramps integrated into the pickup bed, 400-watt power outlets throughout the cab, LED headlights, spotlights on the side view mirrors and a remote tailgate release.

“F-150 is well-known for being Built Ford Tough. Now, it is both tough and smart,” said Mark Fields, Ford Motor Company chief operating officer. “The all-new F-150 redefines the future of trucks, and it is yet another example of our One Ford plan producing vehicles that serve customers with a commitment to the very best quality, fuel efficiency, safety, smart design and value.”

Grueling testing has proven that this is the most durable and capable truck to date. Ford’s truck customers want a heavy-duty truck for every day uses and that’s what they are going to get. More than 10 million miles have been logged for testing the new F-Series such as driving cross country pulling heavy trailers and loads through desert valleys and through mountain passes in high altitudes with temperatures ranging from 20 degrees below zero to 120 degrees Fahrenheit.

Incognito, the truck was put through some serious testing during the Baja 1000 where it competed 883 intense miles beating out other vehicles that were purpose-built.

The frame is rated up to 70,000psi with eight through-welded cross members for increased stiffness and staggered rear outboard shocks for better stability. Construction use is ideal with its high-strength aluminum-alloy cargo box.

Shelby saw the opportunity to improve upon this awesome off-road Baja beast and decided they could make the Raptor a little more aggressive for off-road use.