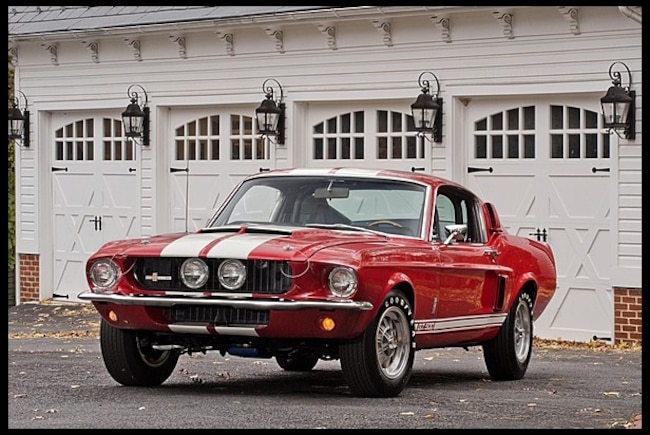 The classic Ford Mustang Shelby GT500 is on the wish list of many car enthusiasts all over the world, and here is your chance to have a rare Shelby to call your own. Crossing the Mecum auction block, this ’67 Shelby GT500 (Lot S188) has been restored to factory specifications with no extra modifications.

With only 172 produced in Candyapple Red, approximately only 75 of those were available in four-speed manual making this Mustang a rare gem indeed. The exterior features White LeMans stripes to nicely break up the contrast of the red exterior. Peer inside to a black knitted deluxe interior with a roll bar, inertia reel harnesses and a fold down rear seat. Other options include a heavy-duty battery, power steering and front disc brakes, extra cooling package, courtesy light group, and special tires supplied by Shelby.

Listed in the Shelby Registry #2174, notes can be found from the last four owners. For further documentation, it comes with the Deluxe Marti Report, copies of the Mustang production order, and a copy of the warranty and policy form from when it was first sold from Burns Ford Inc. of Louisville, Kentucky.

If interested, the Mecum auction will take place from January 17-26 with this Shelby crossing the auction block on January 25, 2014 at 4:25 pm out of Kissimmee, Florida. More info and photos here.