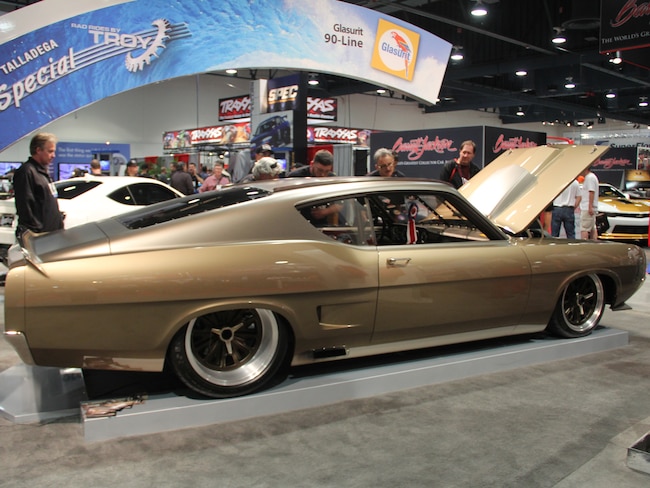 This past week has been one of the busiest weeks in the car industry, thanks to the SEMA Show held in Las Vegas every year. One of the brightest and most envied accomplishments at the event comes in the form of the Mother’s Shine Award. Hundreds of beautiful cars were on display at the SEMA Show, but only one could take home the 13th-annual Shine Award.

Judges came from respected members of the automotive industry including paint specialists, journalists, previous Shine Award recipients, and accomplished builders. The judging is based off of overall appearance, fit and finish, attention to detail, the integration of both stock and custom components, creative vision, and execution of concept.

This year, the Mother’s Shine Award was given to George Poteet from Memphis, Tennessee and his 1969 Ford Torino Talladega “GPT Special.” This bad boy was widened five inches, and in the process three inches were removed from the front fenders. An inch was also taken from the wheelbase.

Under the massive hood sits a Boss 429 with a rare Ford experimental mechanical fuel-injection intake converted to EFI thanks to Rad Rides by Troy. The chassis is a modified Art Morrison piece, complete with a C5 Corvette front suspension and Detroit Speed four-link suspension in the rear. A Watts link and a Mark Williams 9-inch axle tie it all together.

More than 1,000 man-hours were invested in paint prep alone. The body was finally slathered with BASF Glasurit 90-Line Tennessee Whiskey Gold gloss and Daytona Sand satin paint. This bad Torino sat pretty inside the BASF booth (#21441) on the showroom floor.

Congrats to George Poteet and Rad Rides by Troy for grabbing this year's Mother's Shine Award!

A few other Fords received the Mother’s Choice Award with just ten given out. Some of those rides are listed as follows:

1940 Ford Coupe “Checkered Past” (Ford Booth) Built by Andy Leach from CAL Automotive Creations out of Omaha, NE Owned by Ron and Deb Cizek out of Bennington, NE

For the full history of the Mother’s Shine Award, visit www.shineaward.com. Also, don’t forget to check out www.mothers.com for all of your car care needs.