They came with shifters in hand, a quick left foot, and more horsepower than five Honda Civics combined. Some brought more than one form of unnatural aspiration, while others simply improved upon what Ford gave them.

The '04 Muscle Mustangs & Fast Fords Cobra Shootout (for '03-'04 SVT Mustangs) was a complete success, and we're here to bring you all the juicy, tire-burning tales. The MM&FF staff opted to divide the group into two classes, Production and Modified, which made it simple enough to define the rules.

While we're sure there are plenty of as-fast Cobras on the street, our first rule required all the necessary safety gear for applicable speed/e.t.'s. The second rule, which signified the Production class, required the use of the factory IRS and T56 transmission, while the Mod-ified class (coming next month) was pure, unadult-erated debauchery.

We all thought the Ter-minator Cobra was fantastic because of how easy it was to pump out supercar power from the 281ci mill. What's more impressive is that with a few minor tweaks, the drivetrain can handle all that massive power and propel a not-nearly light machine into nine-second territory.

That's right, nines with the six-speed and IRS. Our winner got it done with a combination of boost and nitrous oxide. A few extra cubes didn't hurt either. Jay Knott of Friendswood, Texas, was far ahead of the rest of the competition, but the fight for the remaining positions was tight, with times ranging from 10.79 to 11.29.

Our Modified class competitors, as you might expect, were a tad faster than their IRS-equipped siblings. But the real story here is street superiority, and we're fairly sure that 141 mph in the quarter-mile can get the job done no matter what town you're from.

Having had his share of classic Stangs, Jay grew tired of the resto scene. When he heard Ford was offering the Mustang with a supercharger from the factory, the 35-year-old engineer chose one in Sonic Blue.

Mild bolt-ons progressed to the point where a Kenne Bell unit was installed, and from then on it was all business. "The first pass of the day was the first pass on the new motor," Jay says. "It hasn't been tuned yet so we'll probably add more boost or nitrous to it as we go. I want to go sub-9.50s with the six-speed and IRS. It will never have an automatic!" 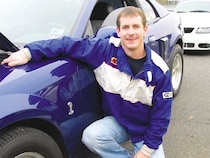 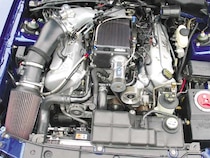 The Willet '03 Cobra was purchased for Tammie Light, Jerry's wife. And, no, he didn't eventually pirate the Pony from her. "She still drives it every day and takes our three boys out in it," says Jerry, who works for Strictly Performance.

Jerry's day came to an early end, though, after a nitrous backfire took out the intercooler and intake manifold gasket. Still, he ran well enough to place second in this group of insanely fast cars. "I'd like to put a C4, a live axle, and maybe a Kenne Bell or Whipple on it and go nines," Jerry says. It's either that or he's going to be swapping an '03 Cobra motor in an '05 Mustang. 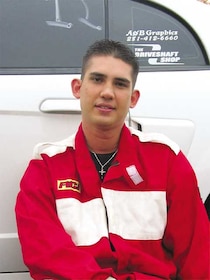 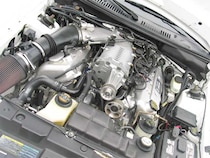 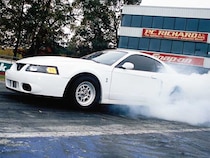 As Detail manager for Apple Ford in Columbia, Maryland, Ray Bernstein is constantly surrounded by Blue Ovals. He sold his last Mustang years ago right before starting a family, so when he heard Ford was going to produce a supercharged Mustang, he thought it was time to buy another Pony.

This Cobra has progressed as most do, and with Ray behind the wheel, it was doing quite well. He even set a personal best elapsed time, and turning the keys over to JDM Engineering employee Anthony Giagnacova netted a new best time for the car as well.

"I'm considering putting an automatic in it for next year," Ray says, "but we found out the gas pedal was bent and I wasn't getting 100 percent wide-open-throttle at the shootout. I've pretty much done everything I wanted to and much more than I thought I would when I bought the car."

Roger Wilson had an order in for an '01 Cobra a few years ago, but he called off the purchase. Then, in 2004, a MystiChrome Cobra caught his eye.

At our shootout, Roger knew something was wrong with the car after the first couple of passes. Changing the spark plugs netted better elapsed times and about 5 more mph. His best pass of the day, an 11.02, was followed by another pass that was sure to be faster as the 60-foot time had improved slightly. But Second gear was not available for comment and the run was aborted. The next time up, the blower pulley popped off.

The damage was easily repairable, but Roger called it a day. "I've got a 3.00 pulley sitting on my desk and I might possibly use some nitrous," he says. "I've got to do the Level 5 axles too." Roger already offered to come back next year and fully plans on sacking the 10-second zone.

Steve was looking to hit the 10s using the Nitto 18-inch drag radials, and he came close. His last pass of the day began with the Cobra ripping the first 60 feet of track in 1.75 seconds, but the blower belt exited the engine compartment somewhere down strip, and he coasted to an 11.55 at 98mph.

"I've upped the nitrous since then to a 175 shot, and the car is considerably faster," Steve says. "I'd like to do cams and maybe a Kenne Bell, but I want to keep it as a street car and have fun with it."

James Parker started out tuning his car along with some friends' rides and turned the endeavor into Runnin' With The Devil, a full-time business. He was edged out by his own customer this day as his pair of 11.29s were not enough to beat Steve Floyd's 11.09 time.

"I know the car is capable of high 10s, but I couldn't get the 60-foot times down into the 1.6s," James says. "The clutch is good on the street, but at the track it really needs slicks." The Sonic Blue beast has logged a mere 9,800 miles on its odometer, thus the stock long-block still gets the job done both on and off the track.

Check out this article on how to swap in a late model six speed Ford Mustang T56 transmission into a 1980s Ford Mustang Fox Body, from Muscle Mustangs & Fast Fords Magazine.