The Fun Ford Weekend points chase comes to a close at the Texas Motorplex.

January 31, 2005
Kenny Compton smokes the hides of his Street Bandit coupe. Compton scored a runner-up finish in the battle at Ennis, but he won the war by taking home the championship. With a Glidden Racing engine under the hoodscoop, the car was good for 8.7-8.8 performances. There are rumors Compton might be stepping up to Street Renegade next year.

It seems like yesterday that we were hanging out in Orlando at the MM&FF Hooters Kick-Off Party. The MM&FF staff had the camera and luggage bags packed quite a bit this season. Continental Airlines took us all over the United States, from the tracks in the South to the asphalt in the Northeast to a few facilities in the Midwest, as we followed the Fun Ford Weekend '04 points series. We finished the whirlwind tour of the country in Texas-specifically Ennis, a small town outside Dallas-where champions were crowned and record-setting performances were made at the finals.

In Mr. Gasket Pro competition, the championship had been sealed a few races earlier, but there was still big money up for grabs along with bragging rights. In what has become typical fashion, Chuck Samuel qualified number one and then went on to take home the winner's check. His turbocharged Mustang produces more than 2,000 hp, and that's enough to push the 2,500-pound car into the 6.60 range. Right behind Samuel was Chuck Simons with his 798ci behemoth that inhales loads of nitrous. Simons checked out of competition after qualifying when he hurt some pistons on his final qualifying run. That left Samuel as the sole 6.6 performer to hold off the field. He beat John Mihovetz in the finals, 6.64/214.28 to 6.89/205.44.

Chuck Samuel closed out the championship season with a number-one qualifier position and the event win in Pro. The Kevin Marsh-owned Mustang performed flawlessly all weekend long. Despite the track conditions (due to the heat), the team posted an impressive 6.64 in qualifying. Samuel beat John Mihovetz in the final round, 6.64 to 6.89.

Billy Glidden sealed his championship in ProCharger Street Outlaw with his '90 Mustang GT. The Indiana native qualified number one and won the race. He ran 7.28 in the final round of qualifying. His black car was nearly two tenths quicker than the next quickest competitor. Glidden squared off against the ProCharger-powered car of Travis Franklin in the final round. The Edelbrock Nitrous-sponsored ride ran another stellar 7.28 to take the victory over Franklin who limped to a 7.89.

Creda Young took the ProCharger Street Renegade class one step closer to the 7s by running 8.19 at 171.58 mph. The ProCharger-powered coupe knocked through the field with consistency, and Young found himself in the finals against the '04 Street Renegade champion, Manny Geno. Young opened up the laptop before the money round and stepped up the tune. The car responded with an awesome 8.11 at 172.81 mph to beat Geno. The nitrous car broke the transmission in the finals.

The "Black Car" is no stranger to the winner's circle. Billy Glidden pounded out a 7.28 in qualifying and sat on top of the ladder as a slew of turbocharged and supercharged entries tried to knock him off. Glidden used his bag of tricks to pop off a 7.28 at 190.16 mph and grab the win over Travis Franklin.

Rod Houck used sheer power to win the last race in Edelbrock Street Bandit. The orange '04 Cobra runs a B.E.S. engine under the hood and outran the field with times in the 8.60s. He beat the newly crowned series champion Ken Compton in the finals, 8.66 to 8.79. Once again, Dwayne "Big Daddy" Gutridge stood on top of the qualifying ladder in BFGoodrich Drag Radial. He grabbed the top spot in the last qualifying round because he spent the first two repairing a broken transmission. Unfortunately for Gutridge, a problem staging the car in the semifinals resulted in a DQ. The car pushed through the lights and the timing system was not activated. That left Dennis Lugo to run uncontested in the final round of Drag Radial.

The Probe Street Warrior finals were over before they began. Number-one qualifier John Scaro faced Rich Groh in the finals. The Chicago racer was a little quick on the Tree and turned on the red light, thus handing the victory to Scaro.

Local racer Creda Young runs only a handful of FFW events each season. Despite that, the car is well known due to its quick times. Young qualified number one in Street Renegade and beat the newly crowned champion, Manny Geno, in the finals. Geno broke and Young whipped out a sick 8.11 at a scorching 172.81 mph.

In the Open Comp-style classes-Steeda/SHM Mod Motor, Vortech Focus Frenzy, and JDM Tough Truck-the competition was fierce and there were championships still to be decided heading into eliminations on Sunday. Robert Hindman won Mod Motor on a double-breakout victory. He blew past his 11.81 index with an 11.79, while his competitor, Gary Parker, slipped past his 11.18 index with an 11.14. Hindman broke out by less so he was declared the winner. In Tough Truck, not only was the race on the line, but the championship was as well. Lacey Gassaway performed under pressure and took the victory in the finals by beating Paul Gamino, thus becoming the Tough Truck series champion. Owen Spry won Focus Frenzy when he pushed his three-door Focus to a win over Mark Adkins, 14.64 (14.38 index) to 16.07 (15.42 index). Spry also took home the championship this season. 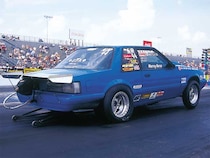 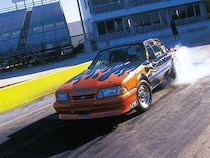 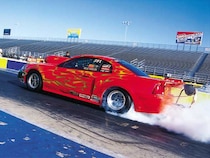 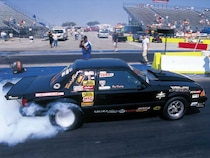 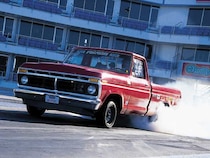 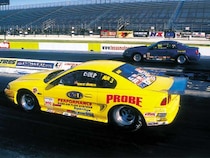 True Street/Ennis '04
There were 82 cars that finished the MM&FF/Tremec True Street tour and all three drag passes, making it one of the biggest, most competitive fields in recent history.

One of the favorites was famed Outlaw racer Mike Murillo, whose new street car sported a mild turbocharged powerplant along with a squirt of the giggle gas. His first two passes were in the nines, but on the third run the tech officials realized he hadn't been running with the required fire pants and he was disqualified.