Ford's special-edition Mustangs go head to head in a Mach 1 vs. Bullitt shootout.

Each year, we aim to do a variety of shootouts that enable us to report on different niches in our market. For example, a few months ago, you read about the Luxobarge battle that showcased large, overweight Ford/Lincoln/Mercury products. In years past, our Modular shootouts have become legendary. It is nice to showcase several different kinds of combinations. This year we wanted to tighten up the focus for Modular-powered vehicles.

Despite the differences in powerplants (giving the inherent edge to the four-valve cars), a Mach 1 vs. Bullitt showdown seemed like a natural. Besides, once the aftermarket parts are thrown into the mix, all bets are off. There are enough two-valve 4.6 cars running sick e.t.'s that we weren't too concerned with the outcome. In the end, we chose to invite six outstanding examples of readers' special-edition Mustangs.

We used the Internet as our main source of tracking down our initial list of competitors. Three Mach 1 owners were contacted, along with three Bullitt owners. Our original list of cars included one blower, one turbo, and one nitrous combination for each style of Mustang. As the date drew closer, a few contestants dropped out. Bob Watson was stuck in Florida catching up on work that he missed during the rash of hurricanes that ripped through his area. Watson's Bullitt won the Modular Shootout last year and is a 10-second player. He relies on a 5L stroker two-valve with a Vortech blower. The turbocharged Bullitt we invited pulled out of competition when the axle bearings went south on the owner's trailer. He was stranded with no way to get to New Jersey from his Florida home. The final tally of competitors was two Bullitts and three Mach 1s. As usual, we laid out their specs, and you can check out what is needed to run similar times as these Mach 1 and Bullitt cars.

Running 11.06 with a short list of modifications is extremely impressive. Corey's Mach 1 is a true testament as to what these cars can do with a little bit of boost. The Mustang had been used as a prototype car at ProCharger in the development of its Mach 1 supercharger system. Corey's best time before coming to Englishtown was 11.61. He attributed the increase in performance to the better air and track conditions, and more tuning at Livernois Motorsports. The car still sports an automatic transmission, but it has been beefed up to handle and transfer the power effectively to the rear tires. He left Englishtown with an 11.06/120.89-mph timeslip in his glovebox.

Corey did struggle a bit early in the day, and at one point, he thought he had broken a few parts. First, he had trouble shifting the automatic transmission under full throttle. He fiddled with the computer chip and was soon blasting off low 11-second times. He did not use the transbrake during our test because he wanted to be sure to make a clean run for the results. His 11.06 could have been in the 10s, but the discharge tube blew off just before the finish line. As you can see, the 120.89 mph is rather low for an 11-oh run. When he got back home, the Mach 1 blasted off into the 10s and ran 10.96 at 124.63 mph. Corey reported that he used the transbrake, made a good clean run, and hit every shift point on the 10.96 pass. 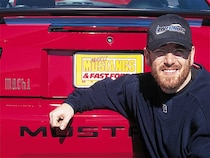 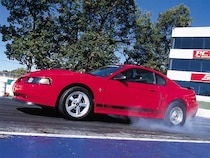 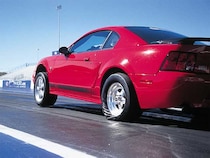 Heading into the shootout, we were looking at Josh Klugger as having the best odds of running in the 10s. His best time to date had been an 11.01 at 131 mph. The 131-mph speed showed he had more than enough horsepower to run deep into the 10s. Unfortunately, the best he could manage on our turf was an 11.35 at 124.57 mph and backed it up with an 11.38 performance. There was an obvious stutter as Klugger banged gears going down track. The car left soft with 1.7 short times and the engine did not pull cleanly through the power band. His results were still impressive.

Initial assessment of the problem had Klugger looking at his MAS, which was maxed out. However, when he got home to Florida, he began inspecting everything and found the turbocharger was dying. The seals on the exhaust side were blown out, and that was the reason for problems. The turbo was unable to spool and produce boost properly.

The engine was rebuilt last year to handle the stress of being turbocharged and remains completely street legal and driveable. The short-block was fortified with better connecting rods and forged CP pistons that yield a 9.5:1 compression ratio. The camshafts and valvetrain are FR500 pieces and work well in the boosted application. Klugger's Mach 1 has made 617 hp at the rear tires at LaMotta's Performance with 14 psi of boost.

Jimmy Waller left Tennessee and hauled up to Englishtown, New Jersey, as a consistent 11.5 performer. He left the shootout with a new best e.t. of 11.38 and backed it up with several 11.4 performances. It is amazing what a little bit of nitrous will do to one of these Mach 1s. As we saw with the forced-induction versions, having a near-stock Mach 1 with a power adder will make you an 11-second hero. We tried to get him to up the juice, but Waller was content with running in the 11.3 zone with the smallest hit of nitrous the kit would allow him. One would think that if he were to up the system to 200 hp, he would certainly have gone much quicker. Durability is a key ingredient for Waller. He wants to log hundreds of miles on the dragstrip without any problems, so we cannot blame him for playing it conservatively with the pill.

The 60-foot time is where Waller picked up the pace compared to his previous best time of 11.53. At E-town, he logged a best of 1.53 on the 11.38 performance, while his 11.53 came by way of a 1.65 short time. The simplicity of Waller's combination certainly brought a smile to our faces. He quickly credited his family and friends along with Page Brothers Performance and Gotera Racing for the quick runs.

John Joachim and his friends drove straight through to New Jersey from Biloxi, Mississippi, which is some 24 or so hours away. They were tired but ready to have some fun. While they had visions of blasting off quick times in the cool Northeast fall weather, they spent their time switching computer chips. The car just did not run as it should have that day.

Despite the apparent troubles, Joachim was still able to run a best of 11.64 at 116.1 mph with a small shot of nitrous on top of the blower. It wasn't far off from his 11.51 best time and we were happy he made it to Englishtown to participate. The air/fuel ratio was off and the car blew the tires away on the starting line each time, too. Still, an 11.64 from a mostly stock engine combination is not too bad.

Remember when we said earlier in the story that a few competitors had to pull out of the competition for various reasons? Well, we can thank Thomas Blore for taking a day off from work on such short notice in order to fill in a vacant Bullitt spot. Blore competed with the same tires, Nitto 555s, that he drove in off the streets with, and they are not the drag radial-style 555s, either. The car was stock appearing and so mild sounding that you would never even know there was a 5.0L stroker engine under the hood.

Blore drove the car flawlessly on the street tires. The Nitto tires would let out a little screech on the launch and on each gearshift. He walked the car out with consistent 2-oh short times. His best 60-foot during the shootout was a 2.02. He tried hard to make it into the 12s on street tires and even removed 100 or so pounds of stereo equipment, but he never achieved his goal as we simply ran out of time. It was quite a valiant effort on his part to run in the 12s but that would have to come another day.