For the last few years, Fun Ford has had to limit the True Street class in Norwalk, Ohio, to just two runs down the quarter-mile instead of the normal three. This is because there are usually over 120 cars that show up, and this year the number was around 160.

Unfortunately, during the second round, there was a major snafu with the car numbering, and the drivers and their car numbers were all mixed up. Despite our investigative resources, we could not find out who exactly was to blame, but it was a single incident among years of flawless True Street competition. Chalk it up to the law of averages, and please accept our apologies.

In the interest of fairness, it was decided (to the dismay of many) that the results would be based off of the contestants' first and only run. That being said, Danny Kimbler of Bucyrus, Ohio, was awarded the low 14-second prize. Now sporting an AFR-headed 302, the former V-6 car still looks the commuter part but runs far better.

Aaron Treppa took home the low 13-second check, but we were unable to reach him for more info about him and his Mustang. He narrowly beat out Andy Brown as the two averages came out 13.140 and 13.142 respectively.

Low-budget fun is the name of the game for Tom Rericha. His '86 Mustang GT uses the stock speed density computer, ported stock heads, and an F303-cammed, 306ci bottom end that has been lightened and balanced. A Nitrous Works 175 shot and a Top Loader four-speed enabled Tom to deliver a 12.068 average for the low 12-second win.

Moving up the ladder and quicker in the field, we found Neal Alder and his '88 GT. A B50, 347-cubic-inch block topped off with Fox Lake-ported Trick Flow heads inhales a NOS 150hp shot of juice on its way to producing 515 rwhp and 530 rwtq. Simple in appearance, the GT hammered the starting line on launch, and Neal rowed the Tremec's gears to an 11.01-second average. Being that the 11-second group was the biggest of the True Street classes, this accomplishment was quite difficult. The next nearest competitors were at 11.05 and 11.09, so it was tight to the finish.

There were four True Street cars running in the 10s at Norwalk. Tim Casto, Chad Faber, and Tim Webb were all piloting extremely fast street cars, but Napoleon, Ohio-resident Marty Merillat had them all covered with his '88 notchback. The coupe, painted by Chad Miller, uses a 308ci engine with Edebrock Victor heads, a Barry Grant carburetor, and a Nitrous Express 150-shot worth of nitrous oxide has propelled the Mustang to a best time of 10.28 at 137. During the event, Marty averaged 10.402 to take the low 10-second prize home.

Towards the top of the heap, there was Jeff Dunne at 9.74, Owen Spry at 9.39, and Bill Klein at a scant 9.18 average. Bill's Jalapeno Red '85 GT features a 380ci bullet built by Victory Engines Inc., which is where Bill works. Twisted Wedge R heads, a CFM Performance 850 carb and a cool 250 hp of nitrous oxide have pushed the C4 automatic-equipped hatch to a best elapsed time of 8.78 at 153, but the pony was slightly off that pace and took the runner-up position. Though many of the top hitters were nitrous-fed, the big power came from forced induction.

At first glance, Greg LaPoint's Mustang doesn't appear to be so fast. A closer inspection reveals some extremely large drag radials out back and a parachute, too. Hmmn--looks faster now. When you hear the wail of the two turbochargers, then you know this thing is going to move.

Twin Turbonetics T66 hairdryers cram atmosphere into the 347-cubic-inch engine that is estimated to put out around 1,100 hp. That's what you need to be on top in True Street these days, and Greg LaPoint is already there waiting for you.

True Street moved on to the next stop at Bristol, Tennessee, and hopefully in 2005 there won't be a problem with the scoring at Norwalk. Despite that issue, there's no doubt that some of the fastest True Street cars show up in Ohio. And here we thought all they had was a lot of corn. 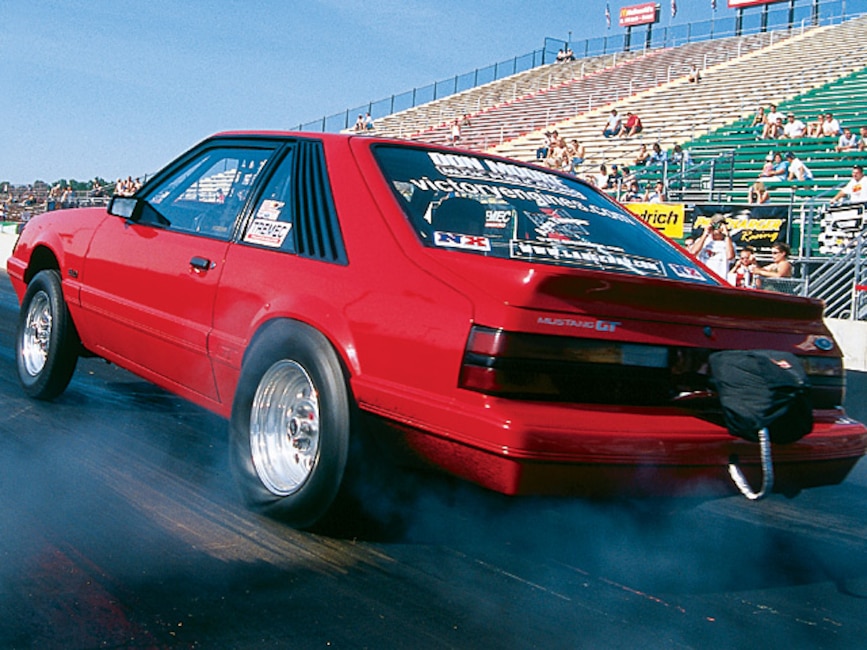 This clean '85 GT belonging to Bill Klien has run a best of 8.78 in the quarter, but couldn't duplicate the elapsed time during the True Street event. It came in a close second with a 9.18-second average. 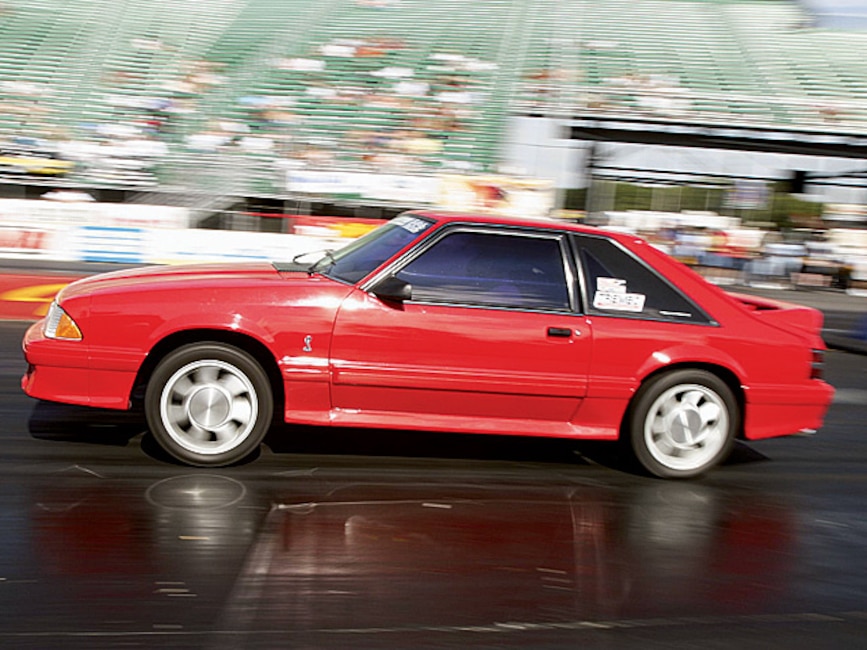 MM&FF freelance editor Rod Short competed in True Street with the Primedia Performance Group's turbocharged '93 Cobra. Dubbed the Charity Challenge Cobra, it is being built up with the help of eBay Motors. Read all about it here soon. 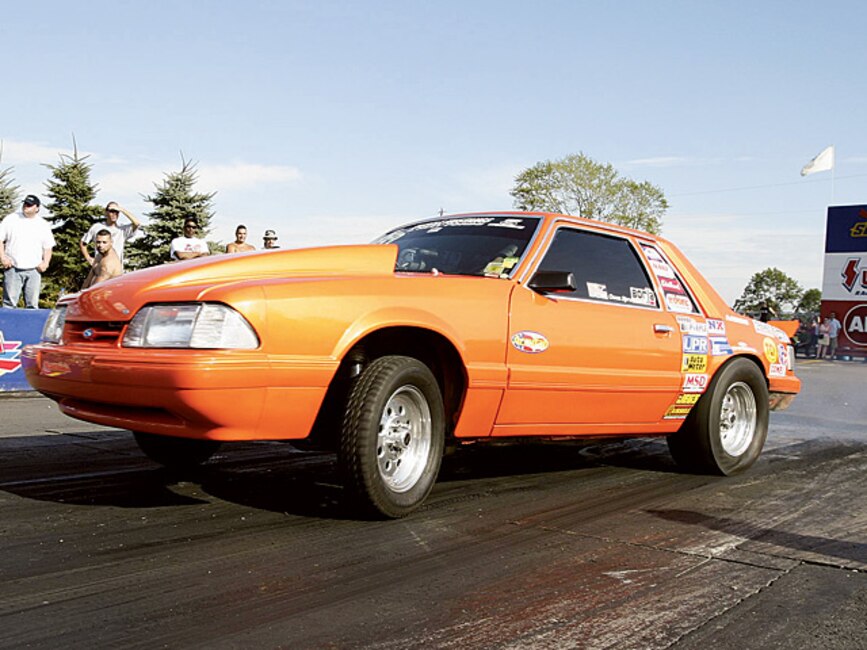 Frequent Fun Ford competitor Owen "multi-task" Spry pilots his Mustang in True Street, as well as the bracket classes. He also runs a Focus in the Focus Frenzy. 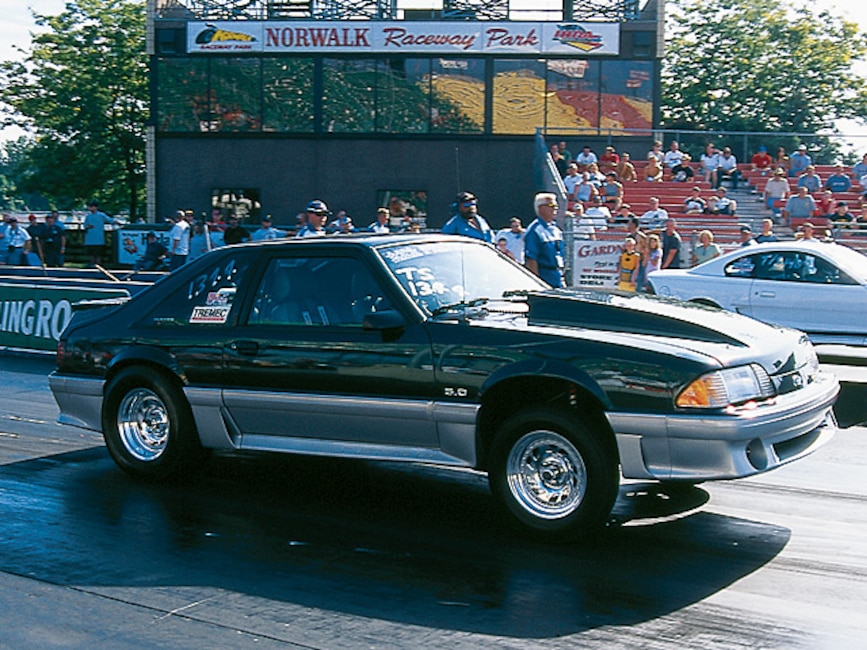 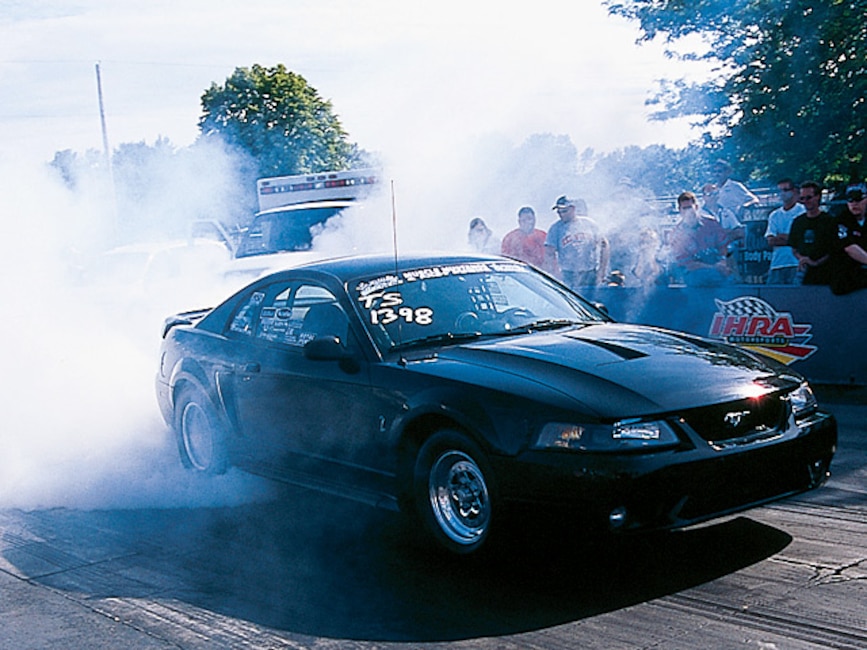 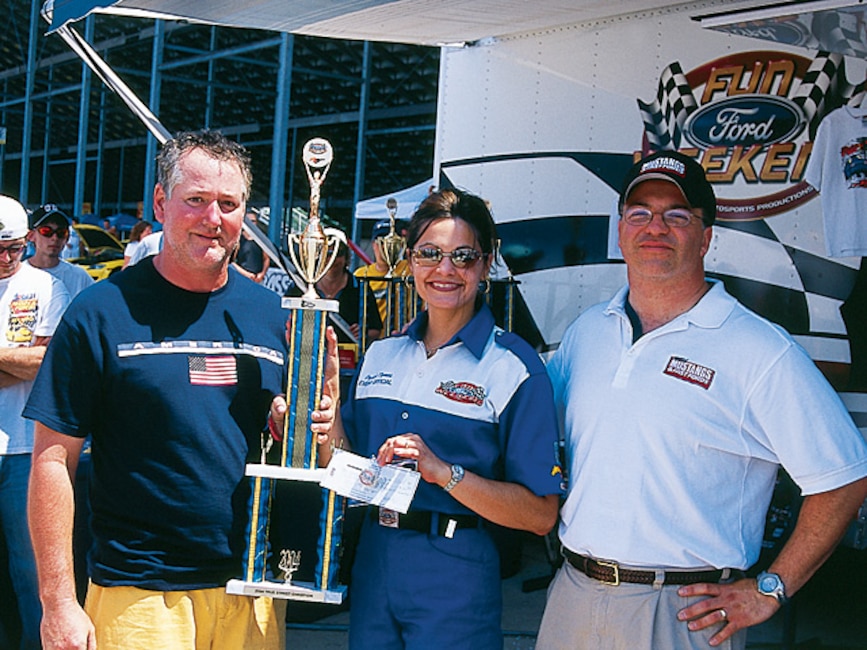 Check out the June '04 issue of MM&FF for the feature article on this bad beast. 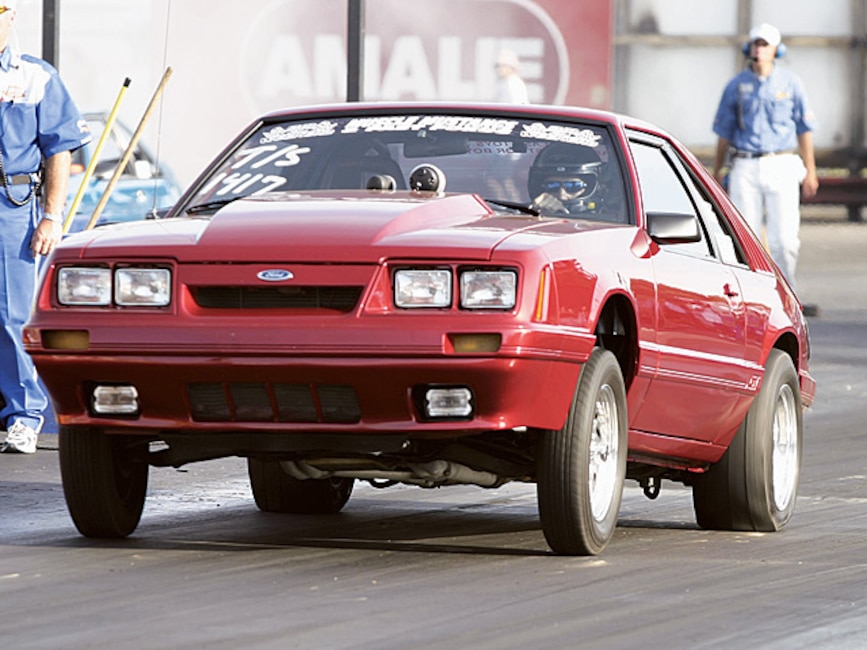 Kathy Powell of Milford, OH, took home the MM&FF Editor's Choice award with her homebuilt '86 Mustang GT. She also did well in the quarter-mile portion of the event, rowing the gears in her Tremec to an 11.27 average. 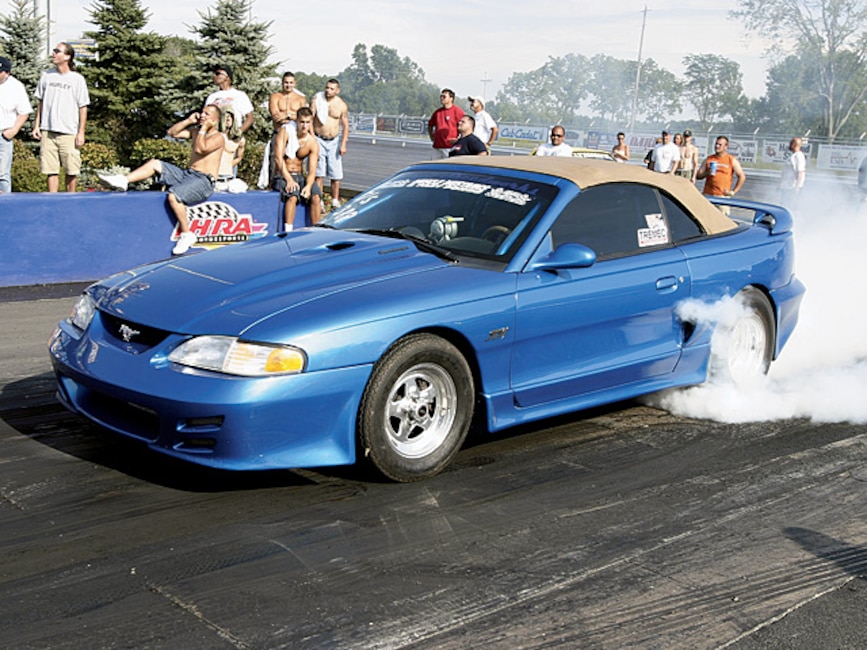 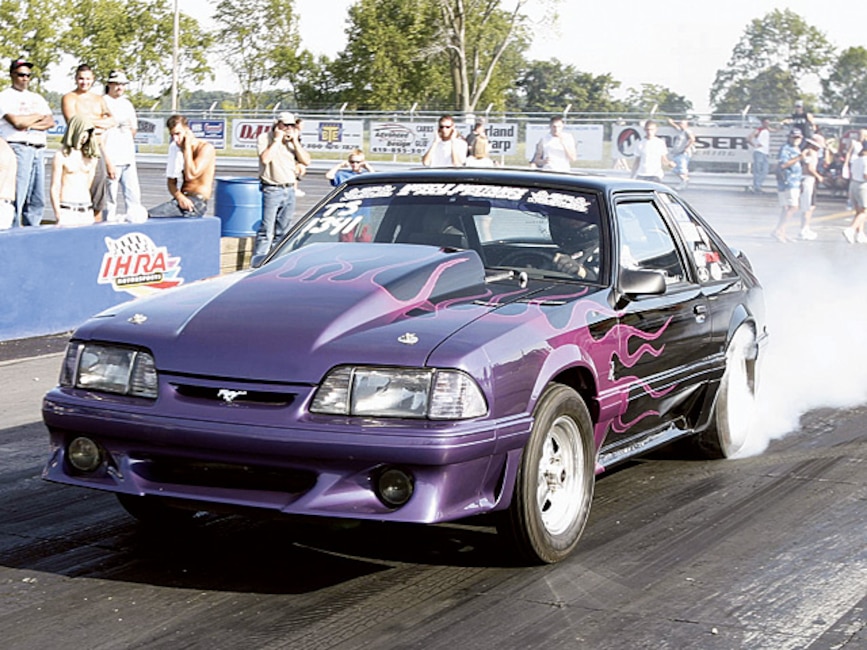 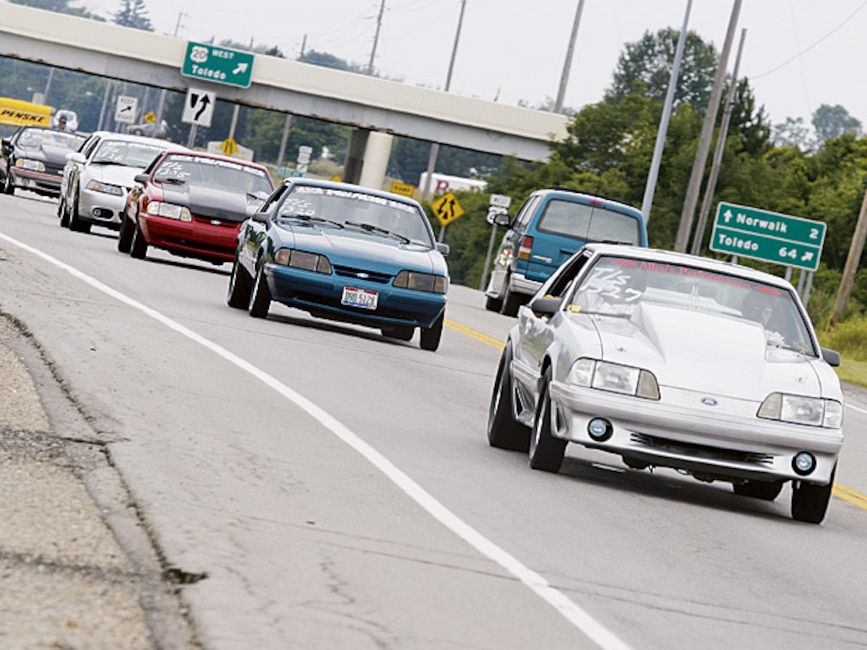