In researching the available rides and submissions for this contest, we realize that there are a lot of really cool, really big, fast Fords out there, but for this year's Luxobarge confrontation, we went to the extreme. We're not talking about 12-second grocery getters here either.

No, we managed to find quite a few cars that had visited the 11s and one or two that were looking at 10s in good weather. Reinhart Automotive and Pande's Performance were some of the first people contacted as both have built Mercury Marauders that make over 500 hp to the tires. Unfortunately, neither could make our scheduled date, but we'll be sure to check back with them for next year's event.

We happened to get a glance of Scott Levine's Mark VIII at the 2003 Fun Ford Atlanta and again in Atlanta this year, he was laying down some truly impressive numbers. We made the call and Scott and his wife made the 880-mile journey to the Garden State to lay the smack down.

We also called Lidio Iacobelli from Alternative Auto in Michigan. We had heard that Lidio was running 11s with a Trilogy-supercharged Marauder and thought that it would be neat to see what he could do here on the East Coast.

Most of our Luxobarge submissions included very nice cars, but we wanted to try to make it as close a competition as possible. With that in mind and a handful of 13-14-second submissions, we put out a few posts on some websites to see if we could hook anybody. Within a day or two, Mike Viverette and Mike Siska had contacted us about their respective Thunderbirds. Both were supercharged using Allen Engine Development's blower kits and both were in the 11s. Done deal.

Boss Campisano came into my office and said, "You gotta' invite this guy Alex Pikas. He's got an LTD that runs in the 11s." No problem. We wanted a diverse array of automobiles, but they had to be fast and Alex's mundane gray Fox four-door fit both requirements.

The only mail-in submission that we chose to invite was that of Treverton Sharp of Worthington, Ohio. He sent us pictures of his mint black Marauder that had received the Kenny Brown S-treatment, Vortech supercharger and all.

Anthony Frusco of Piscataway, New Jersey, had heard about the event as it circulated on the various websites that we posted on. Friends Mike and Mike were both invited and Anthony came too, which worked out well since we had one contestant fall through at the last minute.

Once on the track, the first round of times wasn't too impressive, but by the second round, everyone was getting it together and laying down the numbers we were looking for. Levine's Mark took the top spot despite struggling to get down the track. It's going to be an animal when he gets it sorted out. Mike Siska fought for traction and narrowly beat the LTD for second place.

Lidio's Marauder took fourth with an 11.70 and Mike Viverette was hot on his trail with an 11.85. At the back of the group, Anthony edged out Treverton by a couple of tenths, but all-in-all, it was pretty close like we had planned.

We would love to see these cars run in good weather, but we take every chance we get to get out of the office and down to Raceway Park. And despite the beautiful 80-degree sunny day, we did have a Mark VIII, a Marauder and two Thunderbirds that all ran strongly in the 11s. Quite impressive from nearly two tons of luxury cruiser.

FIRST PLACE
From the outside, Scott Levine's Mark VIII looks like a nice Lincoln with sporty Steeda Ultra-Lite wheels on it. Closer inspection reveals a rollbar inside, but it's under the hood where you'll find a Sean Hyland-built four-valve with a Vortech JT-trim supercharger.

At our shootout, Scott was trying some new programs that were to relieve him of the factory rev limiter, but the car didn't care much for the tune up, so Scott resorted to the old program, which left him riding the rev limiter for the last few hundred feet of the track.

Regardless, he still turned the fastest time of the day, and the new manual valvebody transmission he installed did the trick, as the automatic box previously liked to shift into overdrive without permission. A proper burnout offered some much needed traction out of the hole, which improved his elapsed time further.

Scott's considering going to a F.A.S.T. system to really get a handle on the electronics and once that's accomplished, the Mark should easily make over 700 hp to the wheels, and rather than shifting at 6,800 rpm, he will be able to shift at a more appropriate 7,500. 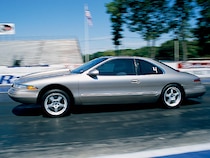 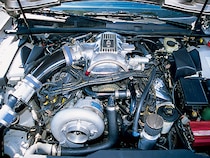 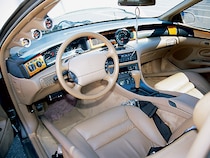 SECOND PLACE
We've seen Mike Siska's T-bird pop up at Ford events all over the place, but we hadn't seen him recently and didn't know that he was knocking on the 10-second door. He obviously would be a top contender in our Luxobarge Shootout, but drag radials and a relatively hot and greasy track conspired against him this day. Mike currently runs Allen Engine's new race kit, which uses a Whipple supercharger with the Allen auxiliary components. The T-bird's tune up was on, but Mike was about two tenths off his normal short times. Still, the 18,000-mile Thunderbird ran solidly in the mid-11s on drag radials with the stock IRS out back.

Mike's T-bird uses a lot of tricks and trick parts like the prototype AJE K-member, ART exhaust and hubs from a Mustang to change the bolt pattern. 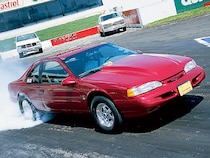 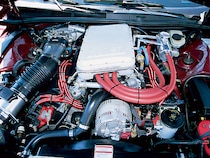 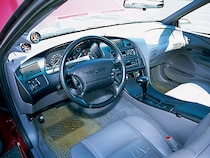 THIRD PLACE
Our one and only LTD didn't really fall into the heavyweight category, as it only tipped the scales at 3,300 pounds, but it has been lightened some and does have four doors, so we qualified it.

Owner Alex Pikas has been toying with the car for six years and has employed the Haltech engine management system for the entire time. "It was cheaper than converting it to mass air," noted Alex. As neat as the aging computer system is, the home-fabricated bracket and manifold that adapts the Super Coupe Eaton M90 blower to the small-block Ford engine is even more remarkable.

We got a chance to drive the beast at the end of the day and with the intake opening located right at the firewall, the cockpit sounds like you're riding under the wing of an F-14 Tomcat. Alex plans to either re-route the setup or scrap it altogether and build a 347 stroker. Alex would like to thank his brother Mark, girlfriend Heather, Brian Bossone at Every Last Detail, and Bill Gibson of Bill's Metal. 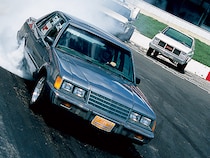 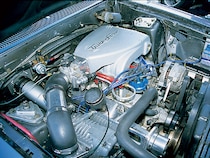 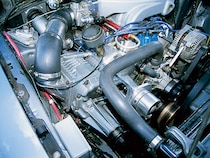 FOURTH PLACE
Little known, but growing fast in popularity, is the Trilogy supercharger kit for the Marauder. Lidio of Alternative Auto told us he's selling about one per week. The Trilogy kit features an Eaton M112 blower and an air-to-water intercooler and at 9.5 psi of boost, adds about 120 hp to the wheels.

Lidio told us about how good the drivability is and he drove his Marauder nine hours from Michigan to New Jersey, knocking down 22-24 mpg along the way. A few gallons of unleaded race fuel, a bit more boost and a 50 shot of nitrous oxide later, the big black machine laid down three easy 11-second passes on Nitto drag radials. A shift kit, Pro-M air meter and some chip tuning are the only other modifications. We're sold on it, how about you? 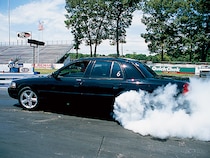 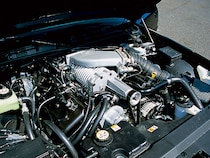 FIFTH PLACE
With just a little over 12,000 miles on the odometer, Mike Viverette's Thunderbird is already on its second engine. Knowing full well he was going to lean on it hard, Mike had an '03 Cobra iron block built and he topped it off with a set of Fox Lake-ported PI heads.

The twin-screw Kenne-Bell supercharger offers that low-end torque that gets the heavy machine up and moving in no time flat. That same torque seems to be overpowering the 16-inch drag radials that he usually uses so he may need to commit to using his Hoosier Quick Times that he lent Anthony for the event. 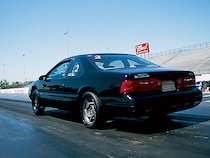 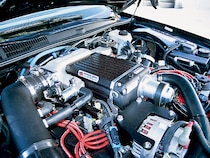 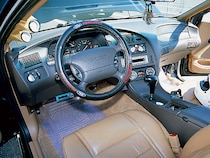 SIXTH PLACE
New Jersey-resident Anthony Frusco filled in as an alternate for one of our contestants. After being dusted by a Dodge Neon in his first outing to the dragstrip, Anthony stepped up by adding the Allen Engine Development supercharger kit that offers up 10 psi of boost. Greed and some extra boost cooked one of the stock pistons, so he procured a stock '00 Mustang GT powerplant and has since put down 325 hp to the wheels.

Quiet and consistent, Anthony's T-bird definitely qualifies as a sleeper, having run in the 12-second zone. At our event a safety feature in the tune up dropped timing and hurt elapsed times, but the 'Bird is still fast enough to stay ahead of most street cars. A complete exhaust and 3.73 gears contribute to its impressive performance. 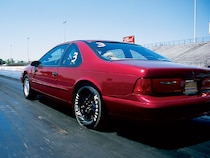 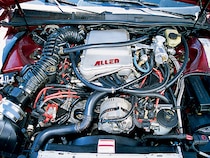 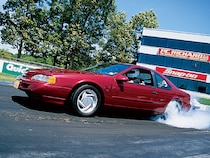 SEVENTH PLACE
Ohio-native Trever Sharp was looking to buy a new Mustang, but with his NFL-like physique and height, it wasn't a comfortable option. Just about the same time, the Marauder debuted and the two were a perfect match.

"Kenny Brown had a Crown Vic package for years. I just waited until he made a package for the Marauder and then sent my car to him," said Trever. Kenny Brown tuned the Vortech SQ supercharger that pumps out 8 psi of boost, and added Baer brakes and lowered the car for better handling.

This was Trever's first time racing on the strip, but he caught on rather quickly and was shaving off elapsed times with ease. With the 430 rwhp this car makes, a set of sticky tires instead of the factory rubber would certainly help this beast move out of the hole a whole lot quicker. Comparably, Lidio's Marauder was cutting 1.8s in the first 60-feet and that same performance in Trever's car should net low 13-second timeslips, possibly 12s. 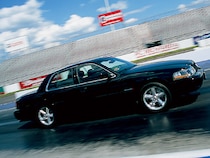 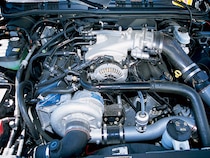 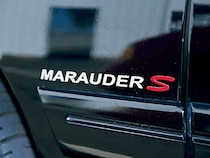