While some of the heads-up classes offered the largest fields ever, it was the Muscle Mustangs & Fast Fords True Street contingent that crowded the track with 95 registered entries--82 of which were able to complete the 30-mile cruise and subsequent three back-to-back, quarter-mile runs.

Baron Yarber of Meadowview, Virginia, was the top cat of the day, having posted a phenomenal three-run average of 9.71 seconds. He was also the low 9-second winner, though DeWayne Stiles was hot on his heels with a 9.75 average. Styles' puzzling pony evidently stepped up its nitrous-assisted performance of 10.59 from last year.

This event was the first time out for Baron's '88 coupe, which used a healthy dose of naturally aspirated horsepower from its 408ci powerplant to get the job done. The Mustang also uses a Powerglide transmission and a serving of 112-octane fuel to feed it. And he hasn't even used the NX fogger system yet. In third place was the low 10-second winner Edgar Negron of Enterprise, Alabama, who drove his '86 Mustang to a three-run average of 10.51 seconds. Negron's square-light Mustang uses an owner-built, 349-inch Bullitt feeding on a copious 250hp worth of nitrous oxide to rotate the pavement beneath it.

Jeff Harris of Dallas, Georgia, pilots a rather elegant and innocent looking faux state patrol Mustang that blitzed the 1320 in a best of 10.84 seconds. The average of his three passes, 11.10 seconds, made him the Low 11-second winner. A Petty Racing powerplant topped off with a Paxton Novi 2000 huffer offers plenty of power, and Jeff bangs the Tremec TKO transmission to get it down the track in a timely manner.

Hailing from McCalla, Alabama, Gary Bullock drove his nitrous-sniffing '90 GT to an average of 12.03 seconds for the low 12-second honor, while Chad Stone of Franklin, North Carolina, secured the low 13-second prize with a 13.00 performance in his 347-powered, '89 Mustang GT.

Kelly Sparks of Cisco, Georgia, had a busy weekend, as she drove her '03 Mach I Mustang to Nashville to check out MCA's birthday celebration. She then headed back home and entered the True Street Competition and was the low 14-second winner at the end of the day with a 14.01 performance.

Norris, Tennessee-resident Randy L. Roddy joined the True Street gang and even though this was only his second time racing at the track, nabbed the low 15-second trophy with an average of 15.07 seconds. Randy's '94 Mustang GT still has its stock powerplant in place, as well as its T-5 manual transmission.

Bryan Lester took home the Muscle Mustangs and Fast Fords Editor's Choice award for his elegant, but most deadly black and silver notchback. Powered by 342 inches of small-block Ford iron, the coupe is capable of 11.50s on the motor, and mid to high 10s on the squeeze.

Judging from the vast number of cars, as well as the single-digit elapsed times of the top two performers, Fun Ford Atlanta's True Street competition is as serious as it comes. Make sure you check out www.musclemustangfastfords.com for our extended Web coverage and photos. Next stop on the Fun Ford calendar is Houston, Texas, which is equally well-known for fast street cars. See you there. 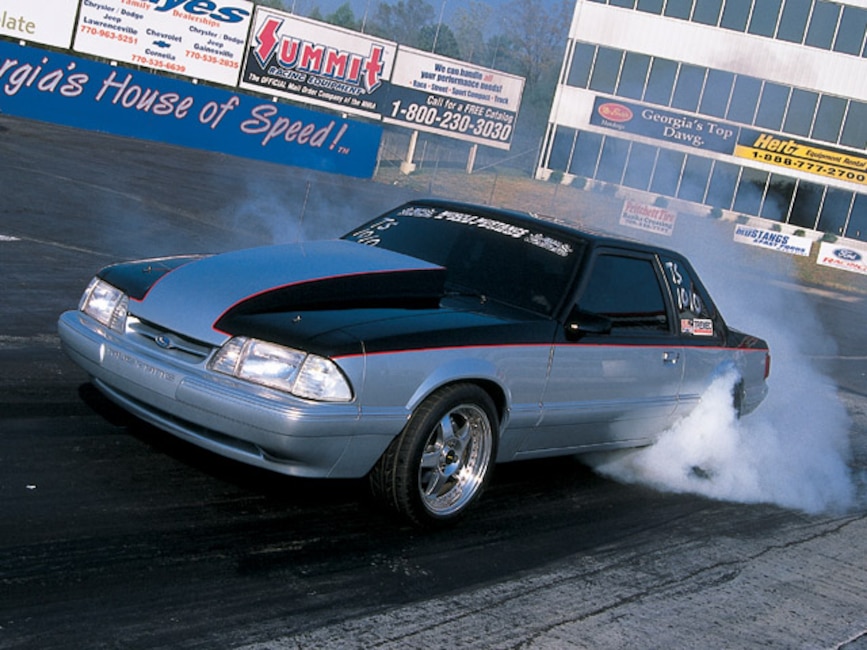 Bryan Lester of Bonaire, Georgia, took the MM&FF Editor's Choice award with his Boyd/Roush Mustang-inspired notchback. With no rollbar, Brian limited his 11.50-capable coupe to low 12s and missed getting the low 12-second win by just .1 second. 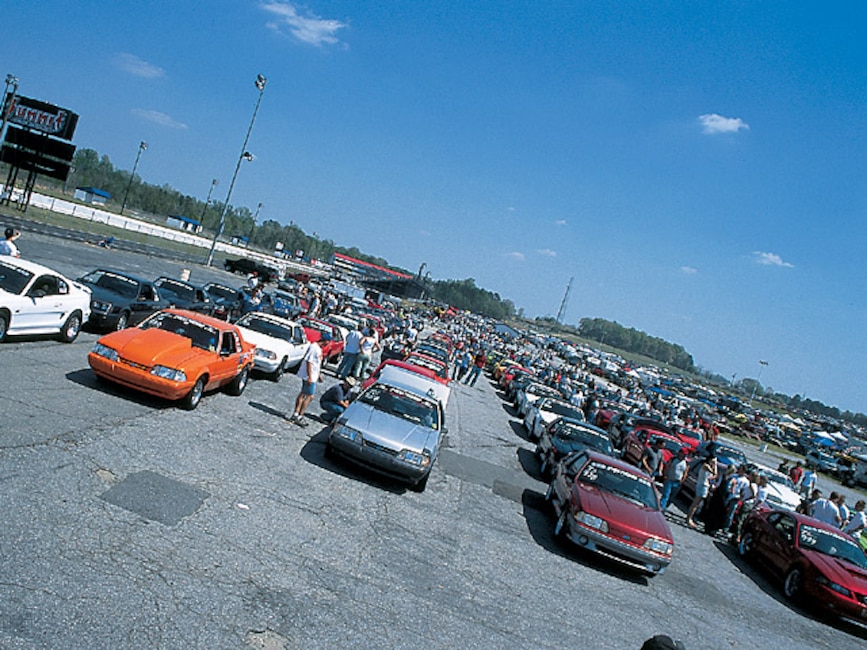 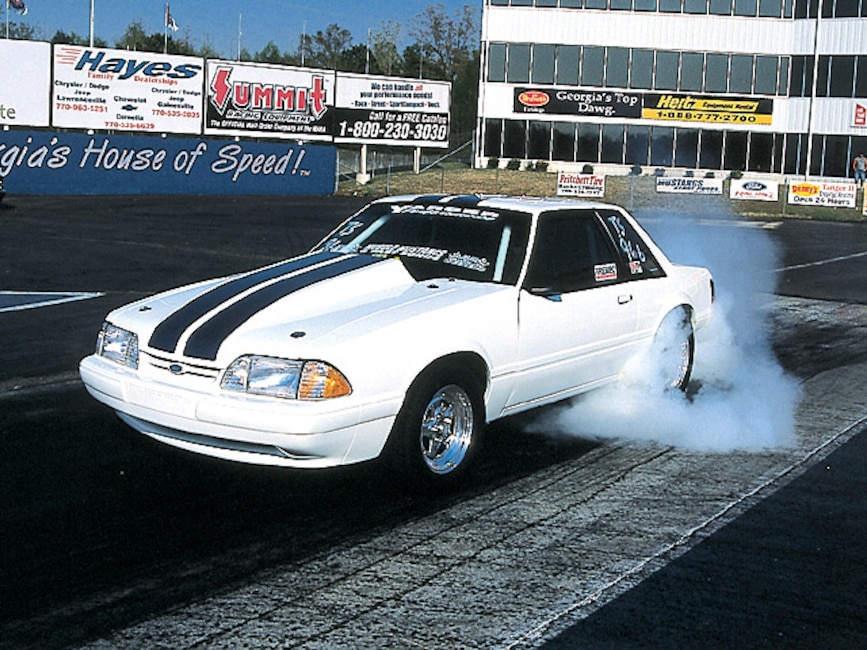 Baron Yarber's Shelby-esque coupe didn't make much of a fuss on the cruise or on the track, but it sure could lay down the numbers. 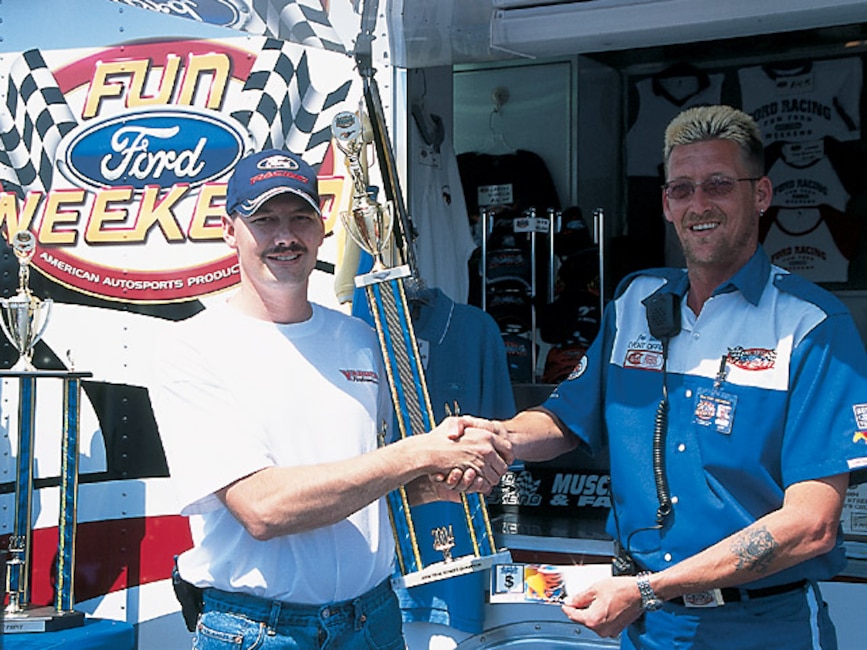 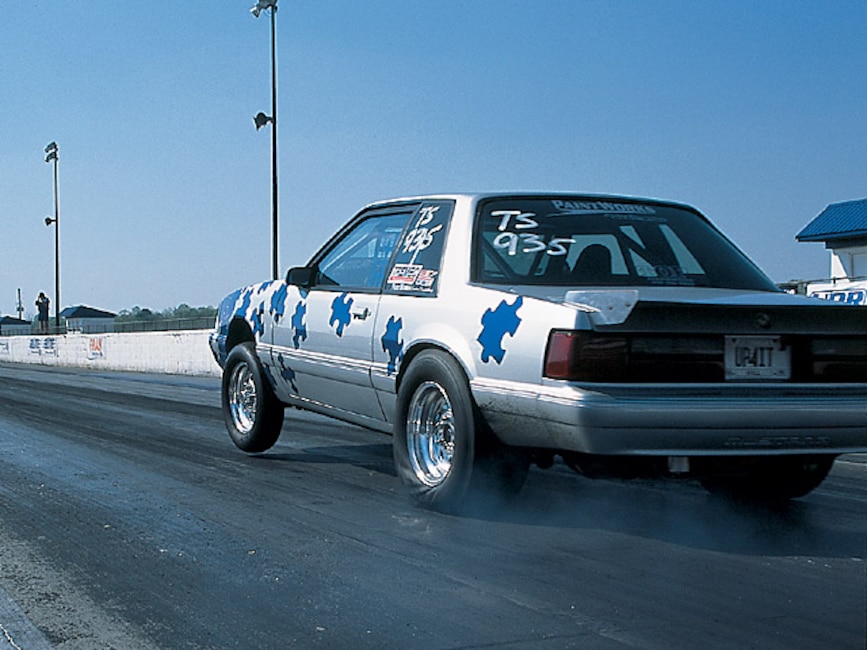 DeWayne Stiles was "up for it," posting a 9.75 average, which was just .04 seconds out of first place. 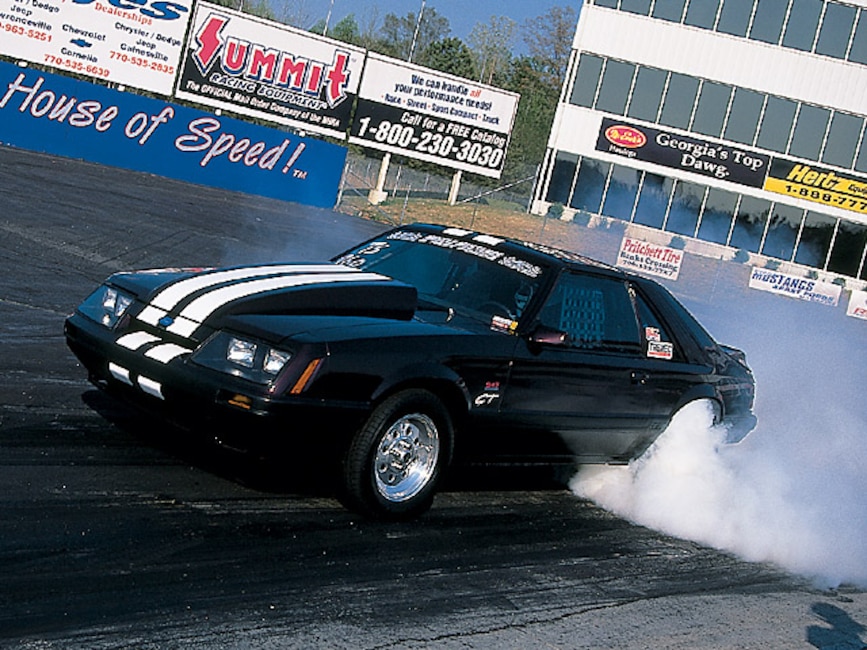 Edgar Negron and his son Cheo ran a best of 10.37 with their nitrous oxide-injected GT. 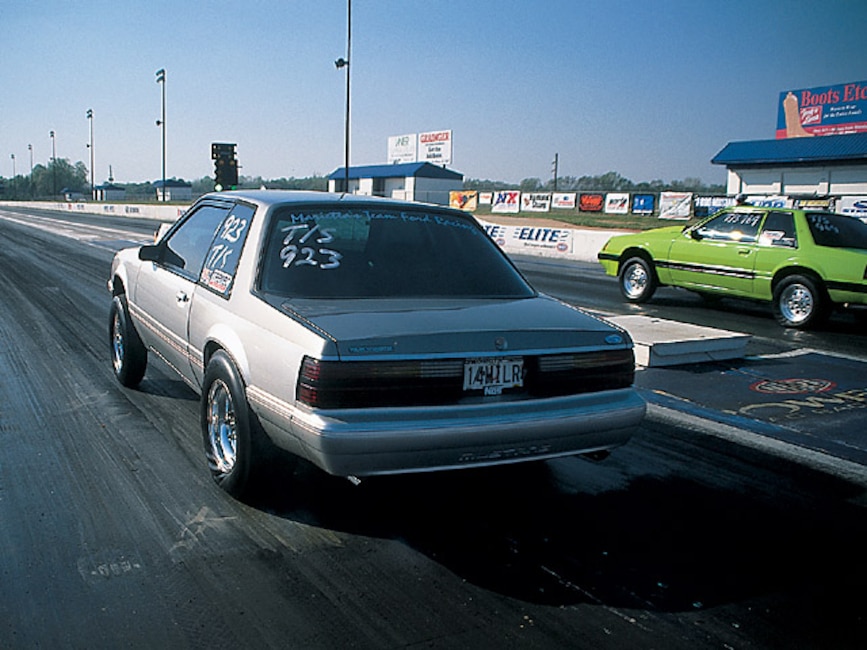 Aside from the shiny Bogart wheels, Jeff Harris' coupe didn't appear to be that fast, but as soon as the light turned green, that first 60-foot told a different story. 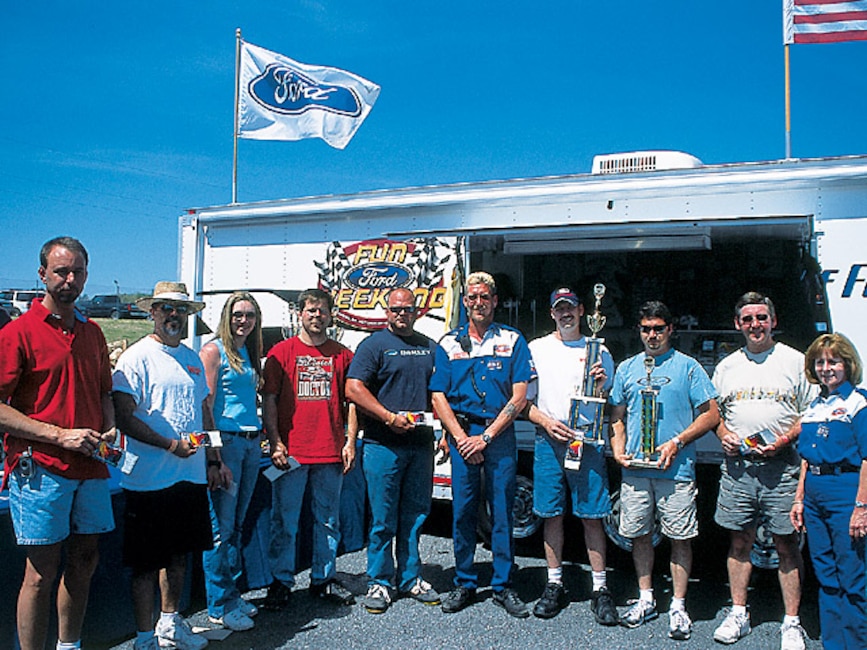 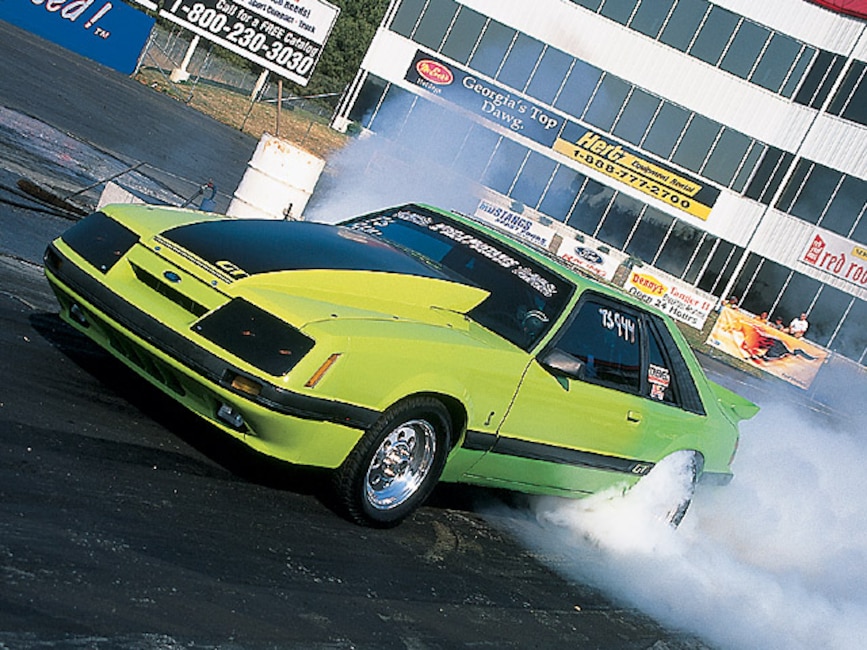 What had to be the brightest car in Commerce was the '85 Mustang GT of Kevin Davis. Sporting a 351 Windsor with a 177 Holley Roots-style supercharger. The Racing System Inc. machine made a mad dash to an 11.49 average. 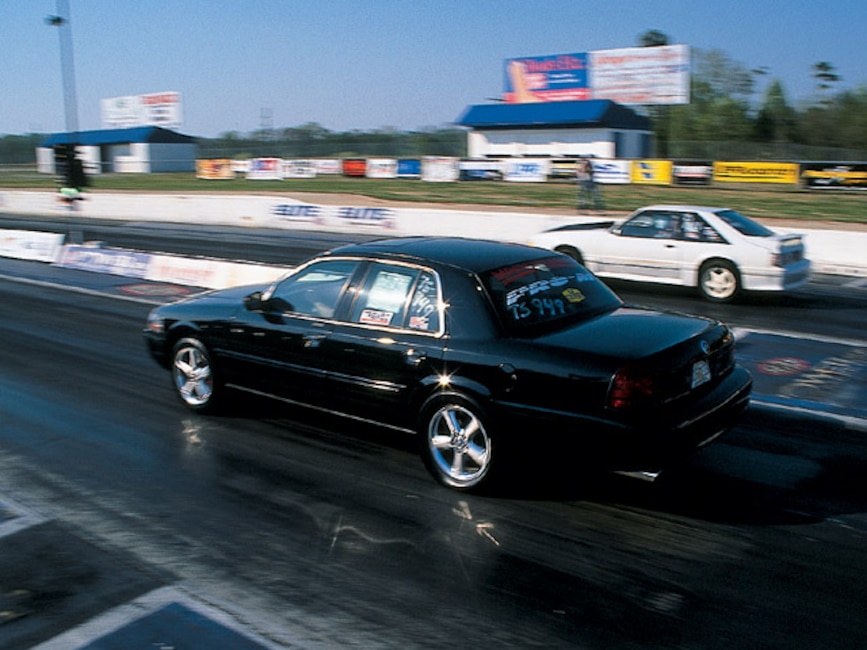 By far the crowd favorite, Dennis Reinhart's Mercury Marauder averaged 12.40, and ran an 11.73 at 118 mph later in the day. The big black beast sports an '03 Cobra long-block with a custom Vortech supercharger, and Reinhart Automotive chipped it using Superchips software. At 18 psi, the Marauder belts out 581 hp to the wheels, so there is a better elapsed time in it still. 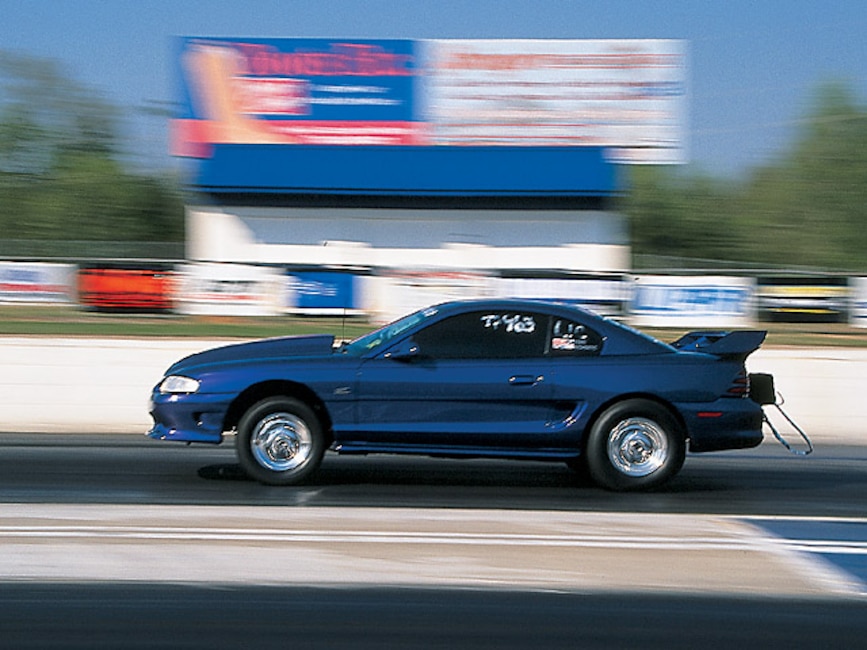 Donny Salem of Mooresville, North Carolina, hoped to make a few license passes with his '95 Mustang's untested combination. Limited to just 19 psi of boost, the turbocharged and stroked 351 Mustang made 810 hp to the wheels, but popped the intake tube off. Donny knew fixing it would disqualify him since he had to open the hood, but he was allowed to make some license runs. Saturday's attempt failed to put a good number up, but Donny ran a 9.8 and a 9.6 at over 134 mph on Sunday. Once he adds more boost, Donny plans to head for the Drag Radial ranks. 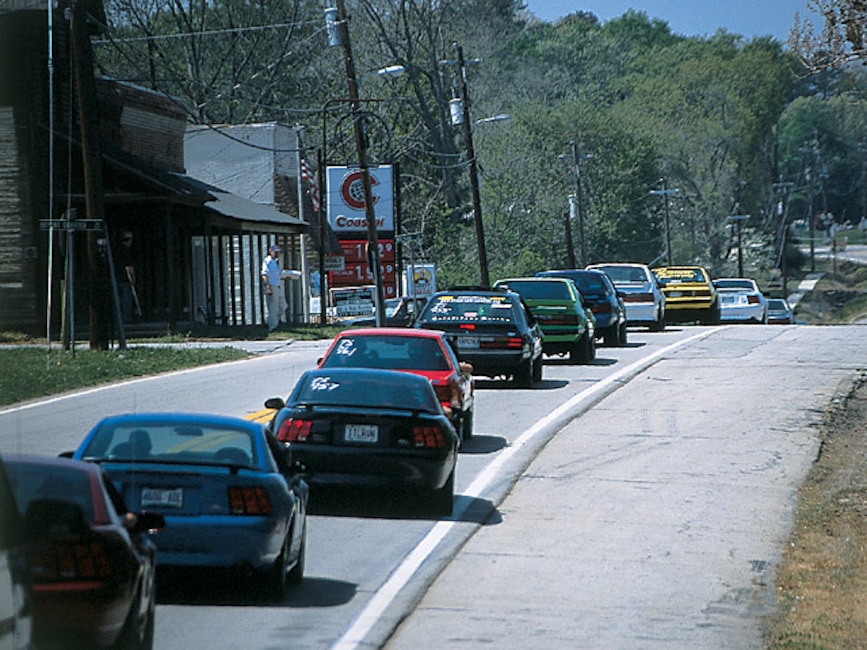 The beautiful Commerce countryside claimed a few victims from our 30-mile road cruise, but most of the 92 entries did complete it without a problem. 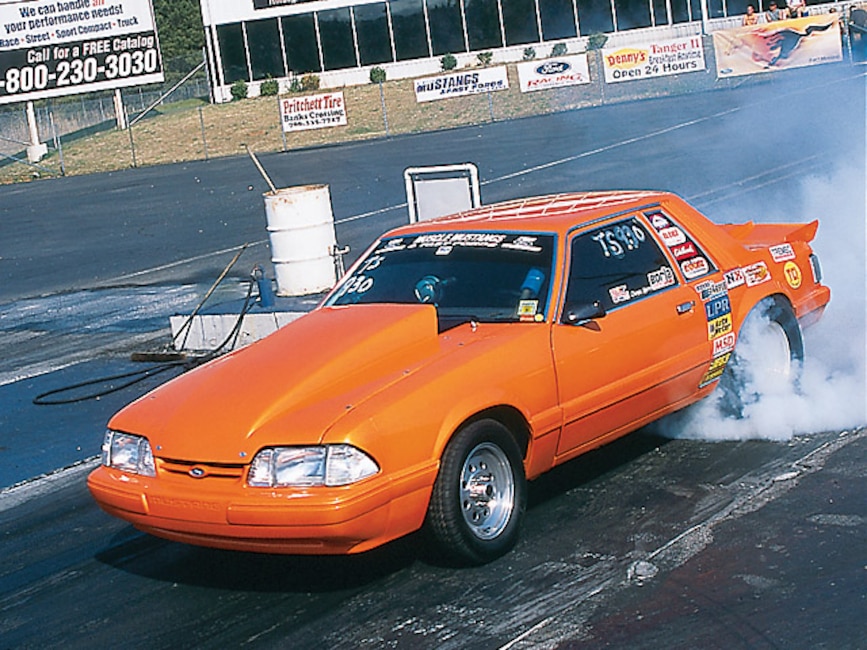 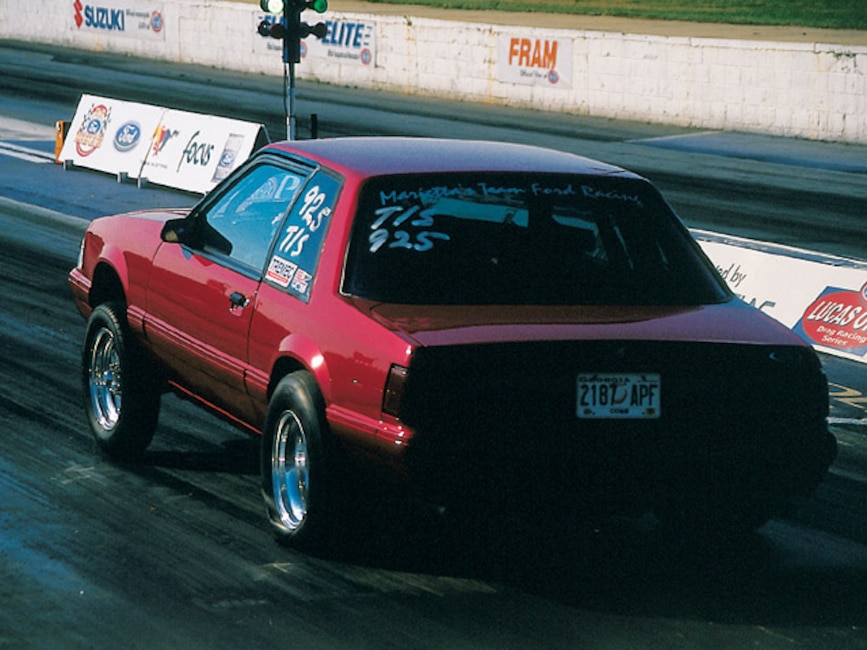 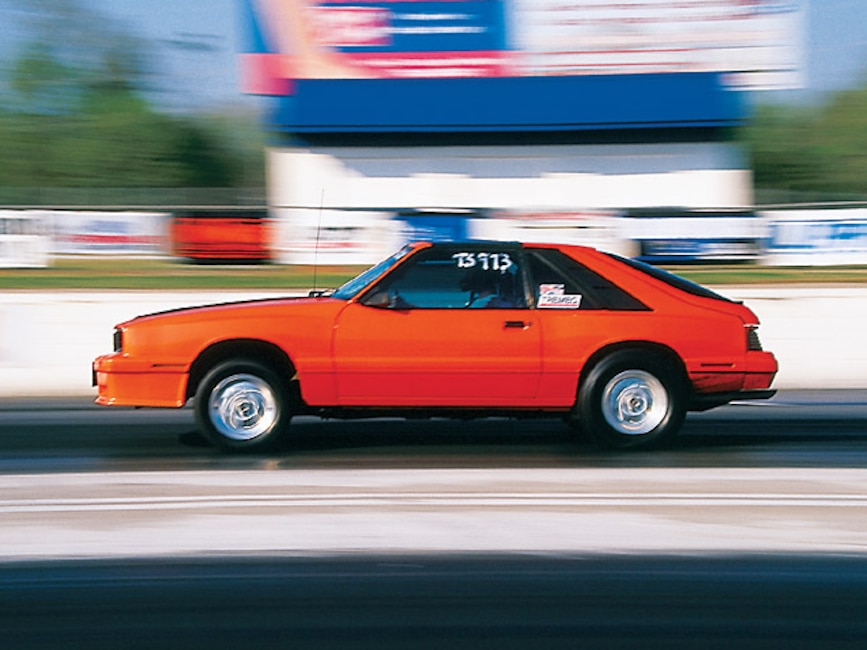 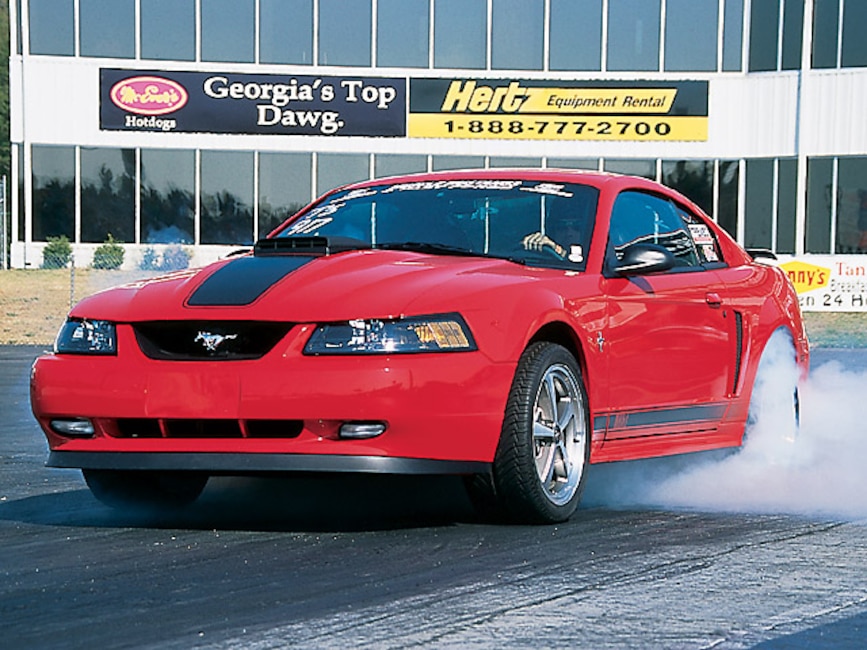 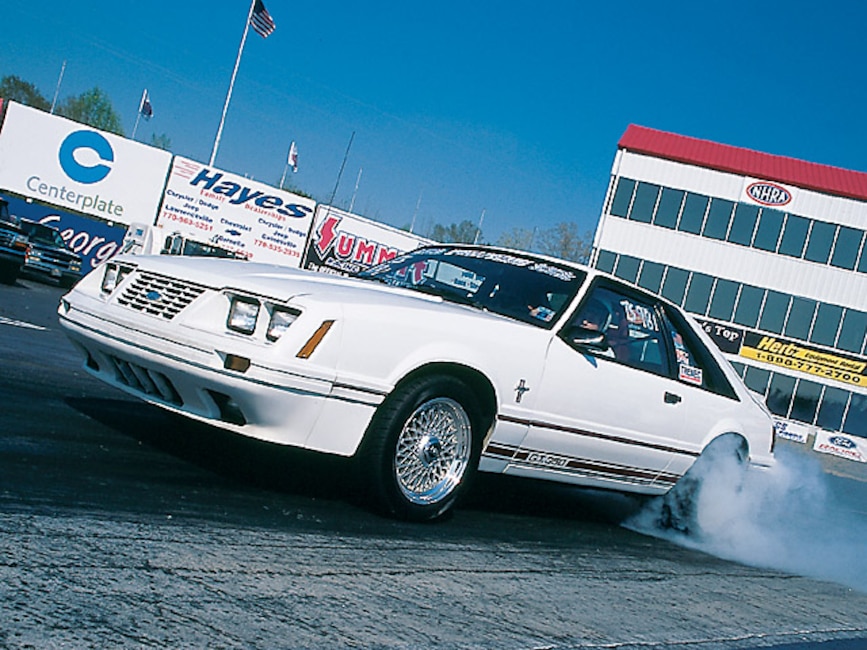 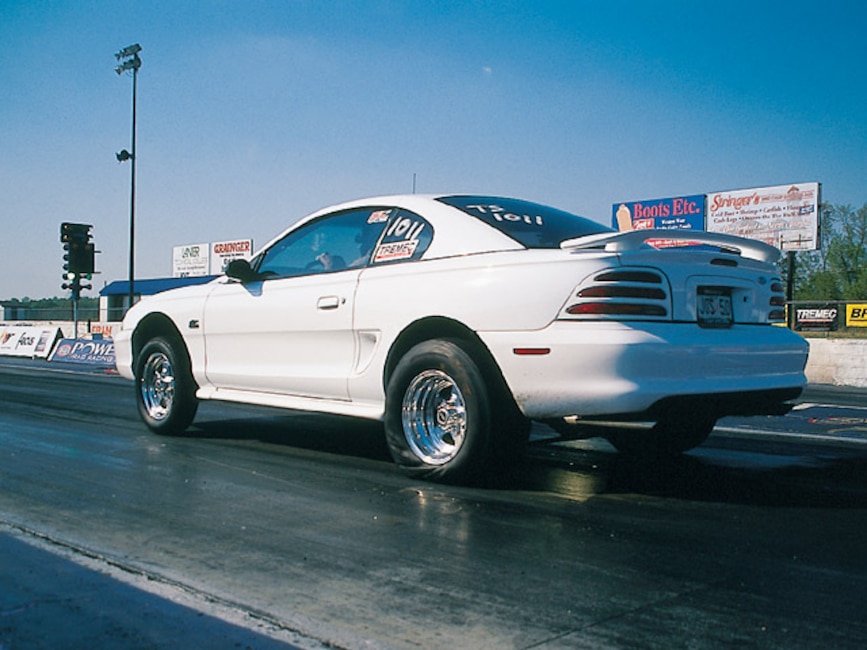 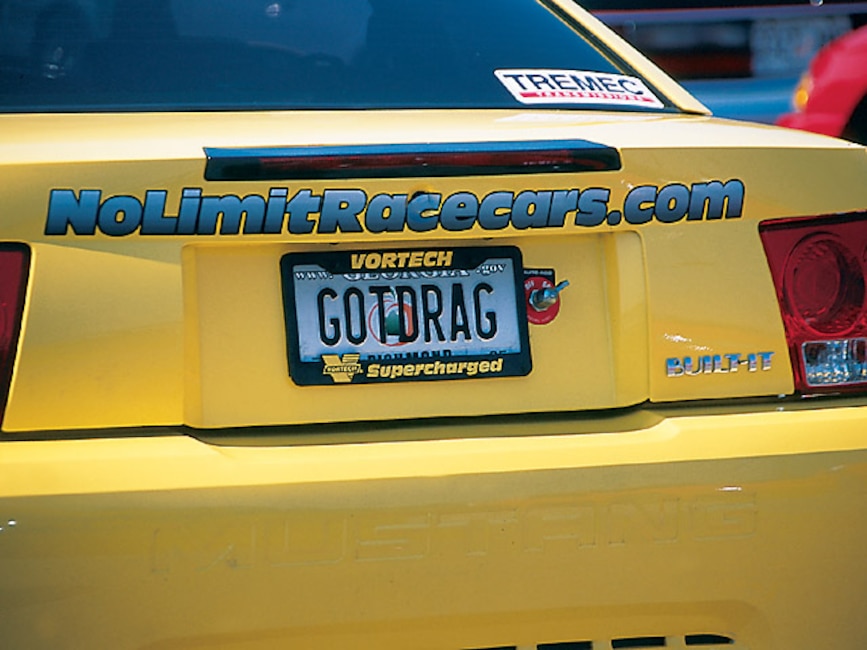 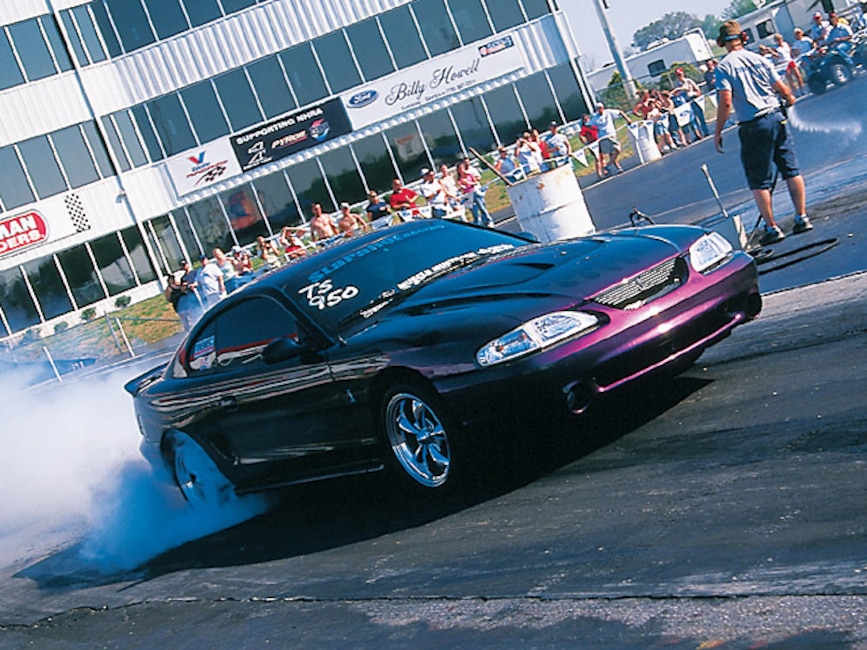 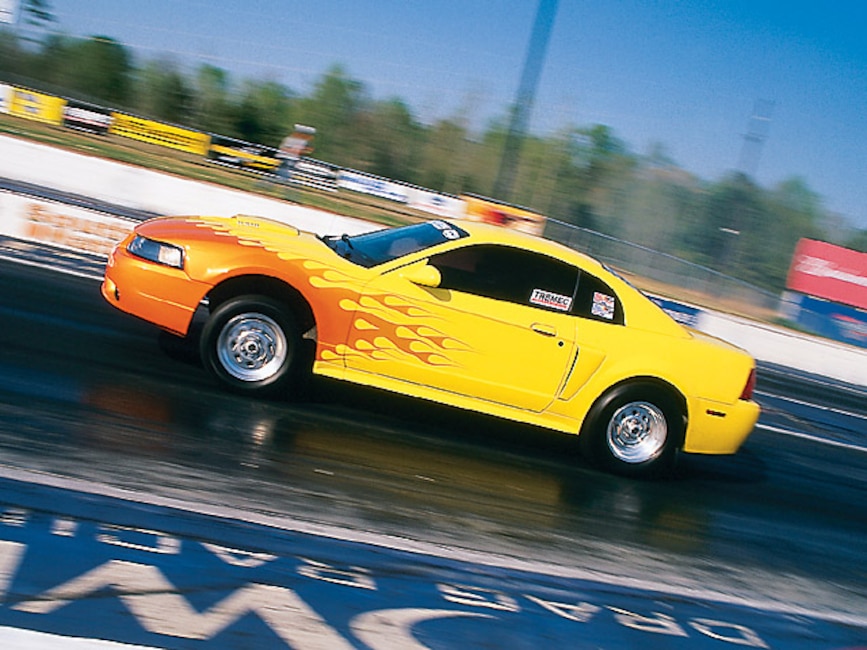 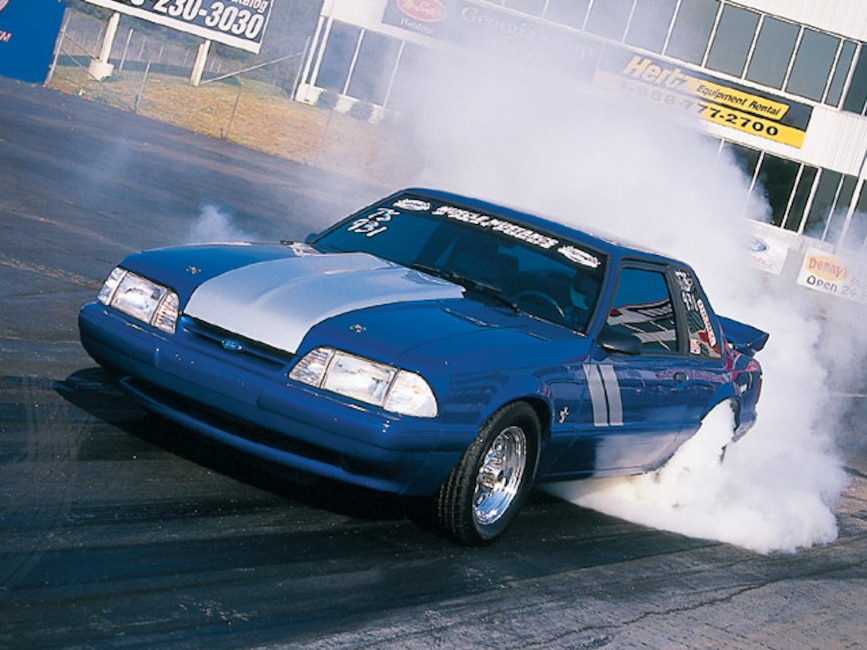 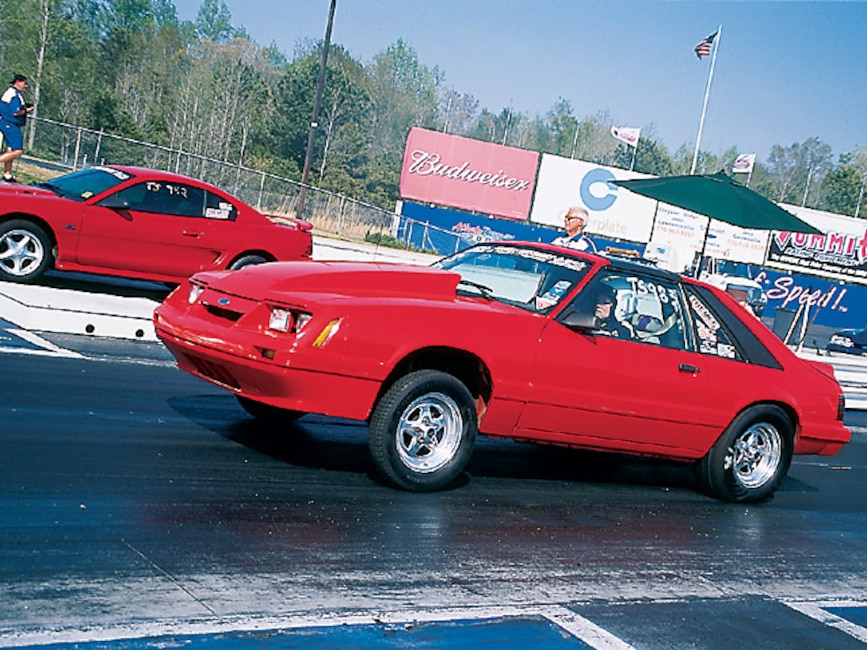 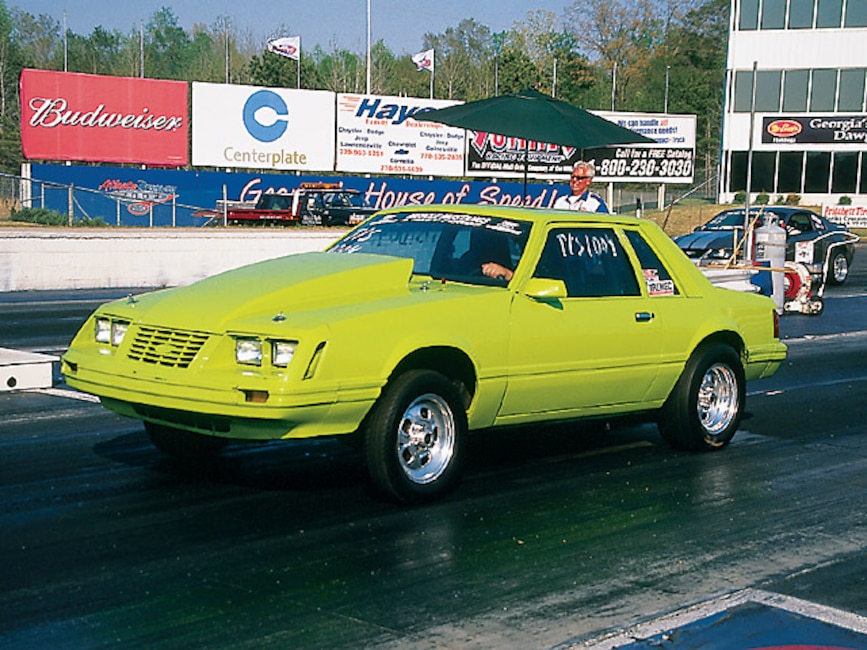 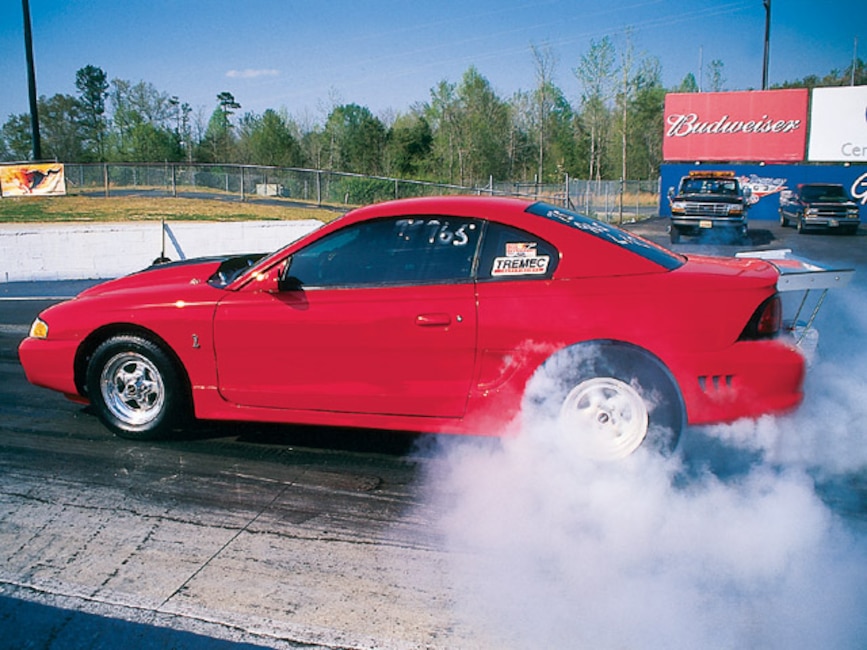