The latest MM&FF 4V shootout was blown away with Eaton superchargers and a trick turbo, but a normally aspirated Cobra showed us an alternative to strip sensation. 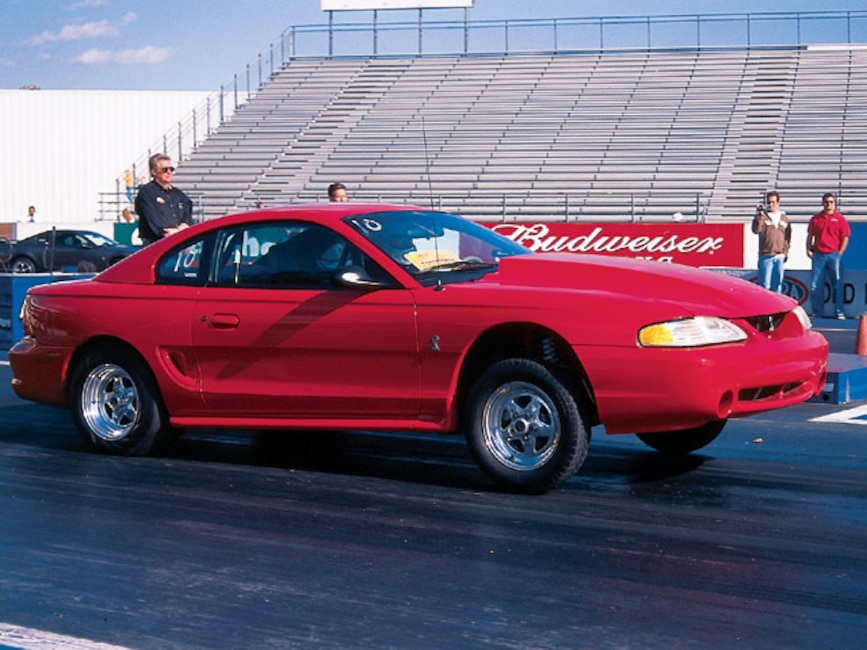 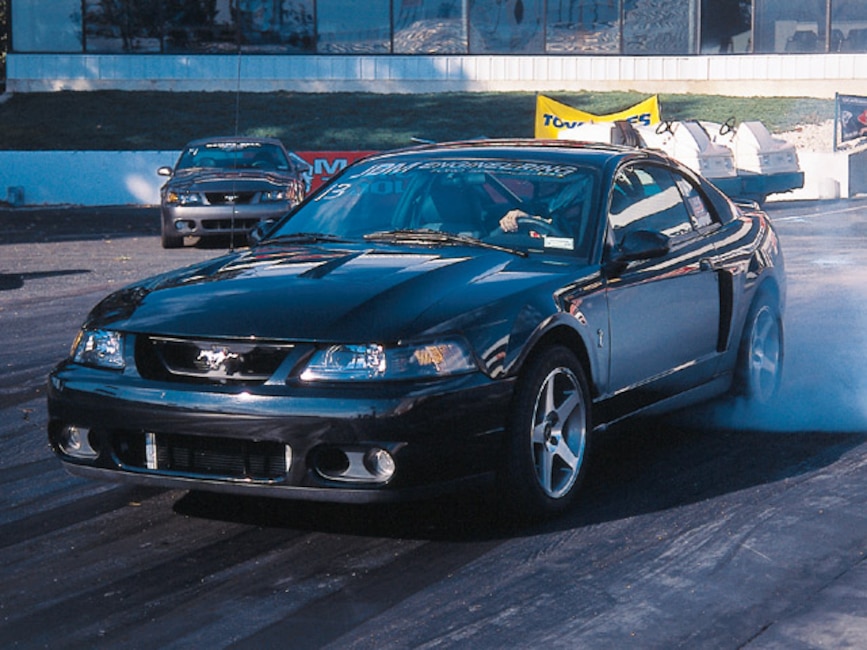 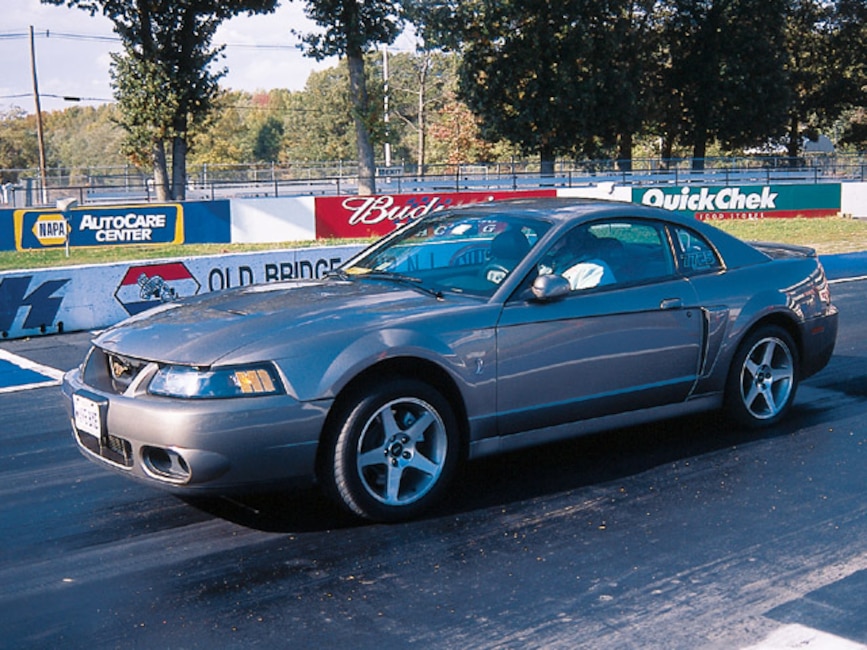 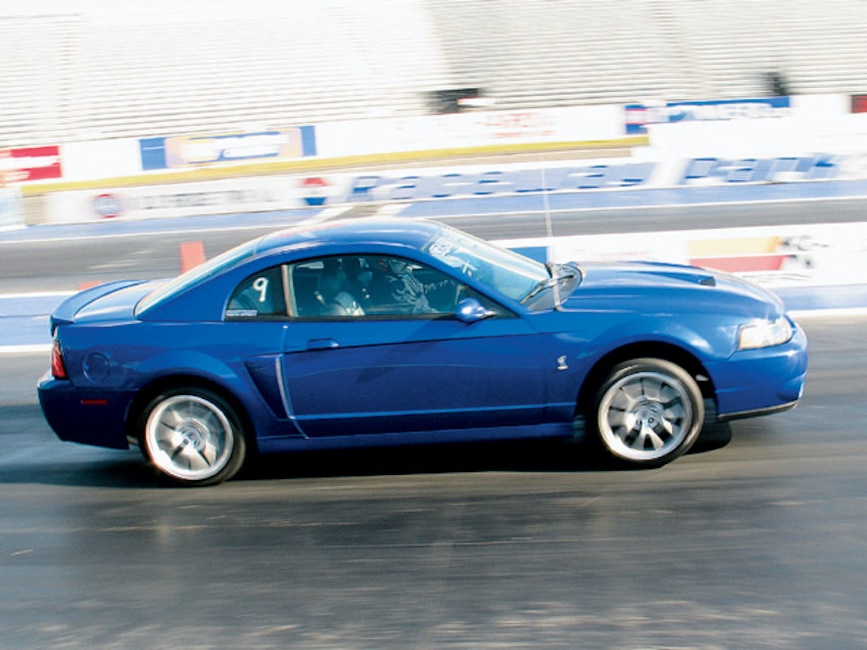 This was the last in a long line of successful and action-packed MM&FF reader shootouts held in 2003 and we feel we've saved the best for last. In the April 2004 issue we showcased what our 4.6 two-valve competitors did on Englishtown, New Jersey's Raceway Park strip of asphalt, and this month we'll concentrate on our four-cam contingent--one of our quickest 2003 shootouts overall.

We elected to keep the crowd small this year (only five cars) and felt that focusing on "real world" street cars would be a more viable solution to purpose-built, race-only steeds. In an effort to keep things exciting, though, we did include a pair of serious machines to help us down the track in record time.

The first was an '89 LX coupe with a turbocharged and intercooled '98 Cobra engine and the second was a 10-second, normally aspirated Cobra complete with an '01 Lincoln Navigator 5.4-liter powerplant under the hood and a five-speed behind it.

Our other three cars were, surprise, '03 Cobras. We love the styling and performance potential of the factory blown flyers and no matter how hard we try, we can't seem to get enough of the Eaton-supercharged beasts. With nothing more than a few simple bolt-on components, these cars are running in the 11-second zone with ease. Can you say "rollbar?"

First Place
Bill Greer/Tim Matherly
We invited Bill Greer to our 4V shootout because his trick '89 LX coupe is powered by a '98 Cobra 4V engine and a GM Powerglide transmission, which runs in the mid-10-second zone. Unfortunately, Greer had business commitments and could not make the drive north to Jersey for our track day.

MV Performance owner Tim Matherly was the man responsible for tuning Greer's ride and made the switch to a turbo from a supercharger (it was originally purchased with a Paxton Novi 2000, but was converted to an Innovative Turbo by MV Performance). Matherly volunteered to put his plans on hold for a few days so he could make the hike from Georgia to represent the Fox body and 4V crowd at the shootout. 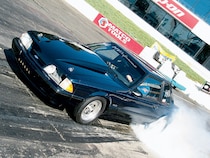 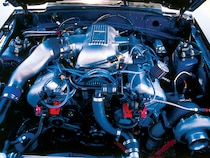 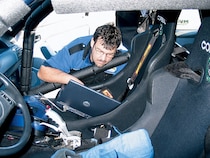 Second Place
Al Papitto
Although our quickest quarter-mile performance was generated by a turbocharged, Fox-bodied Modular machine, we also had a killer normally aspirated Cobra on the grounds. Firefighter Al Papitto was on hand with his one-of-a-kind, 330-inch '01 Lincoln Navigator engine-equipped Stang and proceeded to pound out mid-10-second times from the 5.4 rocket without breaking a sweat.

Papitto is no stranger to the Modular wars. He was a class champion at Dave King's Modular Shootout the past two years and is one of the quicker normally aspirated Modular cars on the planet. His red '97 gets the job done via a Papitto-built Navigator mill, which uses Manley connecting rods and CP pistons. Up top, a custom lower intake manifold sits on a pair of '01 Navigator heads and generates 500 hp at the rear wheels.

Although a 10.687 best was extremely impressive and dropped a few jaws, Papitto was experiencing leakage from the number-seven cylinder, which was hampering the engine's compression. Papitto diagnosed the problem shortly after our shootout (it was a vacuum leak), fixed it, and proceeded to blast to a stellar 10.35 at 131.96 mph during a street car event at Florida's Orlando Speed World Dragway. 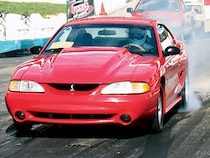 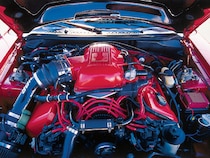 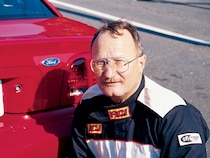 Third Place
Shaun Lacko
The crew at JDM Engineering is known for constructing some of the toughest and quickest Lightnings in the world, but the guys there are also no strangers to '03-04 Cobra performance. In fact, JDM was modifying SVT Cobras long before the supercharged Lightnings ever hit the streets.

Lead JDM tech Shaun Lacko was the man behind the controls of the black JDM R&D machine and had run in the 10.70s with a 10.730 at 129.80 mph best. During our shootout, the JDM crew was experimenting with a special McLoud clutch arrangement, which was way too violent for the mild starting line launches needed to hook up with drag radials. Lacko tried to walk the beast from the starting pad numerous times, but the laps ended with constant tire spin and/or shake and poor results at the big end.

After giving it one more shot the stock half shafts screamed "uncle" as they could no longer take the tremendous torque loads the Eaton-blown mill and the aggressive clutch were pumping out. With a snapped shaft, Lacko had no choice but to retire for the remainder of the day, but still mustered a decent 11.483 at 123.47 mph. 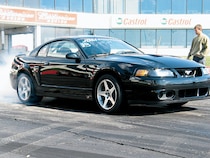 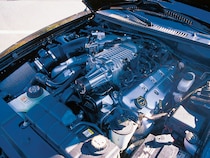 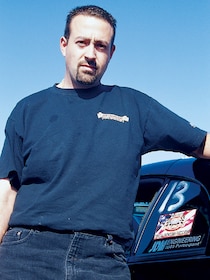 Fourth Place
HARVEY JONES
Harvey Jones has been a Ford performance vehicle lover for as long as he can remember and first came on the scene with a handful of supercharged Lightning pickups. The trucks were awesome rides and ran well on the racetrack, but soon Jones made the move and traded his latest Lightning in for a brand new Mineral Gray '03 Cobra.

The performance modifications on Jones' ride are subtle, but there isn't much that needs to be done if low 12-second quarter-mile passes are what you're after. With a Billet Flow throttle-body, BFGoodrich drag radials providing the hook, a 2.80 JDM Engineering supercharger pulley and a generous amount of ice cooling the Eaton supercharger down, Jones blistered to his best time ever, a strong 11.848 at 118.43 mph.

Since our shootout, LaRocca's Performance in Old Bridge, New Jersey, put the tune to the factory computer by re-flashing it and Jones generated a solid 473 hp and 489 lb-ft of torque on the DynoJet chassis dyno. By the time you read this Jones hopes to be in the 11.50s. 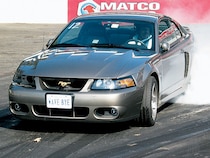 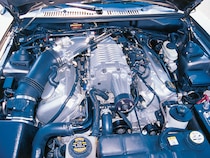 Fifth Place
Chris Winter
Rounding out the final spot at our shootout is the Crazy Horse Industries owner and operator Chris Winter, who was at the wheel of his energetic '03 Cobra shop car.

Winter, who is planning to race a limited 2004 schedule in the NASCAR Craftsman Truck series, relies on an 80mm C&L Performance mass airflow sensor, a smaller supercharger pulley and a custom Superchips/Crazy Horse Industries computer chip to rip off low 12-second times. Other than that, the mill under the factory hood is bone stock.

During our shootout, Winter elected to use the factory rubber under his Cobra and needed to walk the car softly from the starting line in order to prevent smoking the tires. Although he so desperately wanted to run in the 11s for the first time since owning the car, he rounded out the day with a best time of 12.237 at 116.11 mph.

At the conclusion of our shootout, Winter borrowed a set of 16-inch M/T ET Streets from one of our 2V combatants and let the clutch rip from the E-town starting line to the tune of an 11.79 at 120.12 mph. 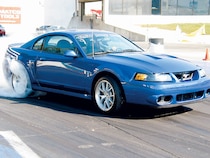 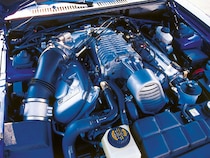 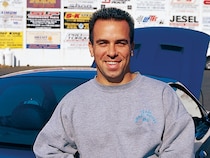