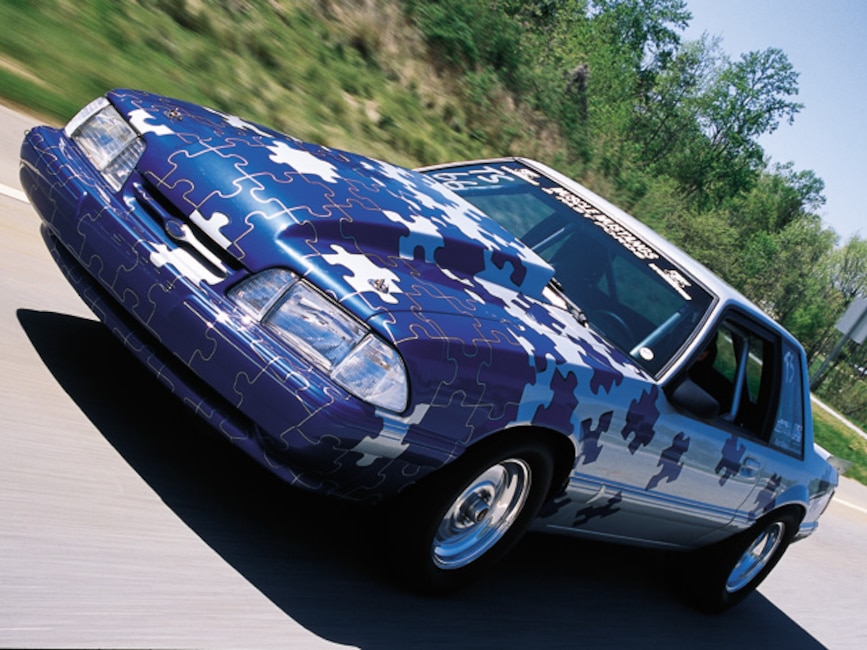 Someone spent a lot of time on the paint of Dewayne Stiles' puzzle car, but the end result is a unique look and one that grabs quite a bit of attention. The coupe is packing plenty of performance too, with a nitrous-injected 383. 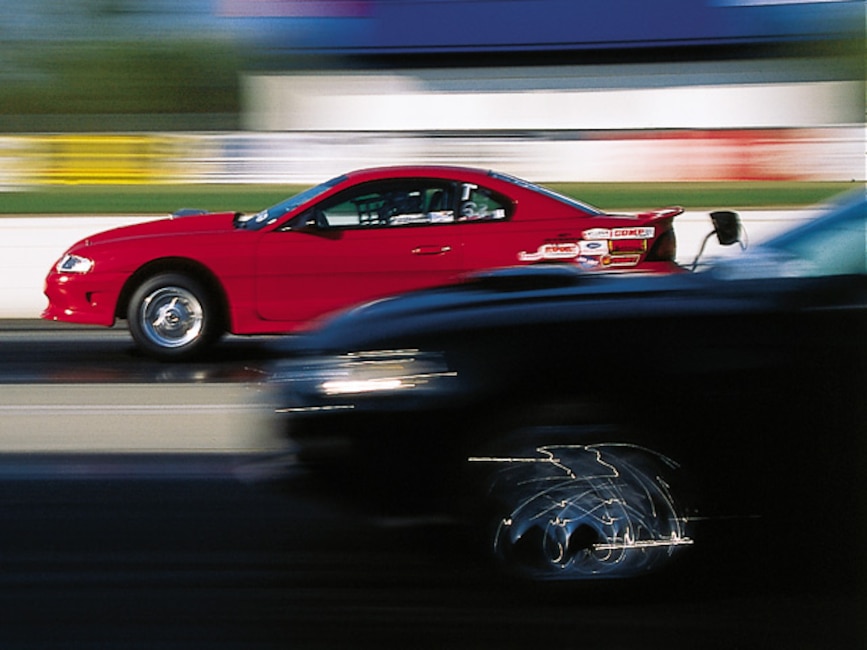 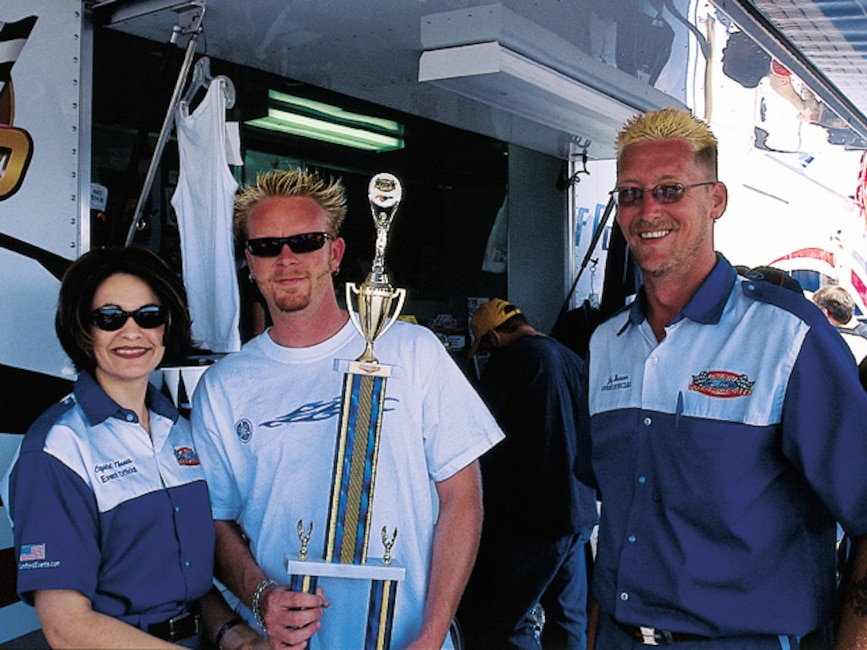 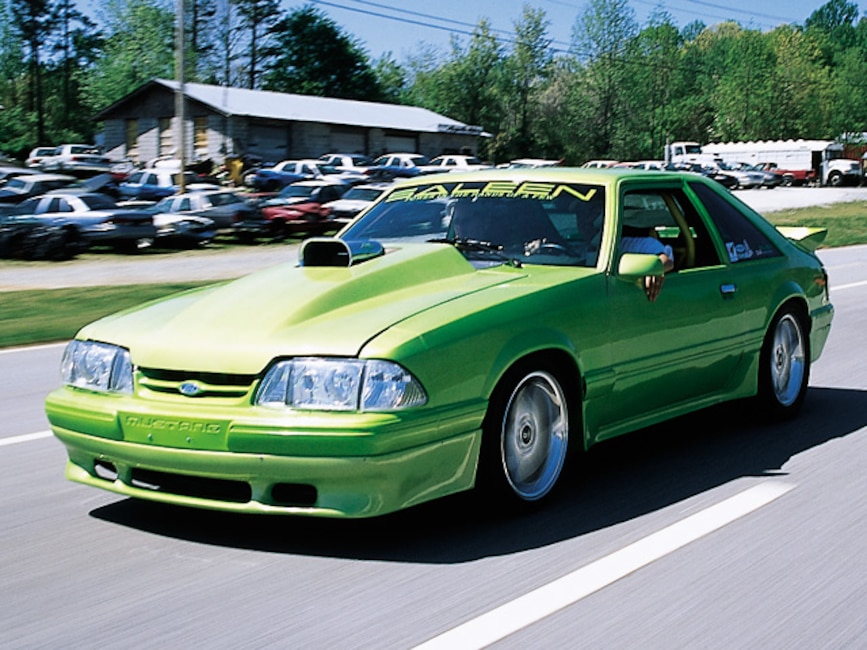 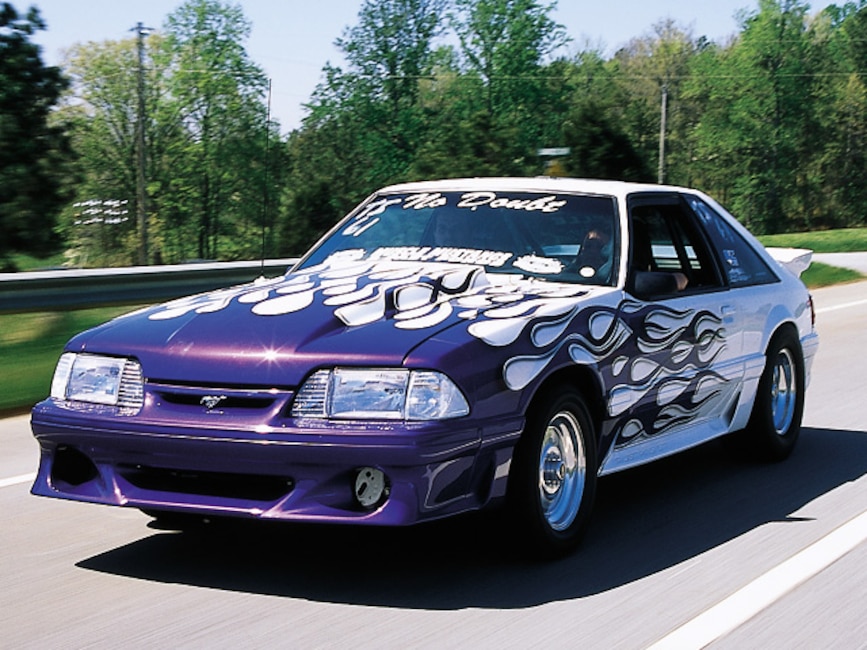 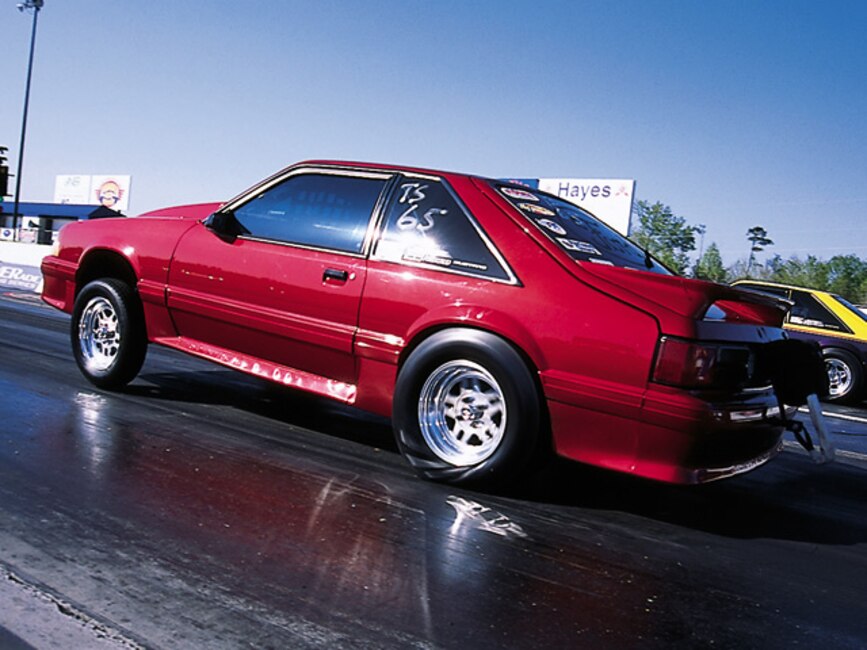 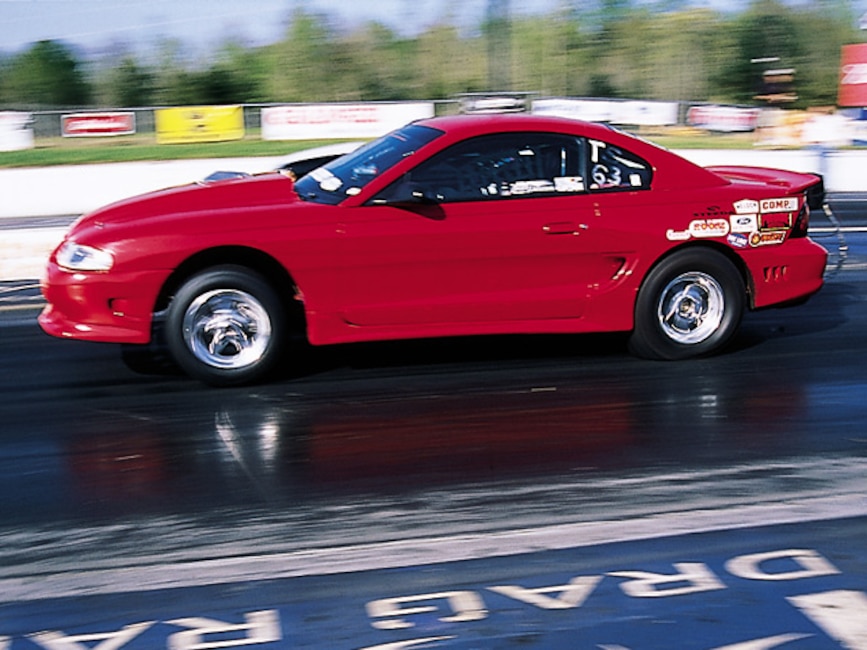 Orlando native Todd Amandus piloted his '95 Mustang to the low 9-second fly zone. No one else had the "cojones" to hang with him below the hard deck, so he was awarded the True Street top prize. 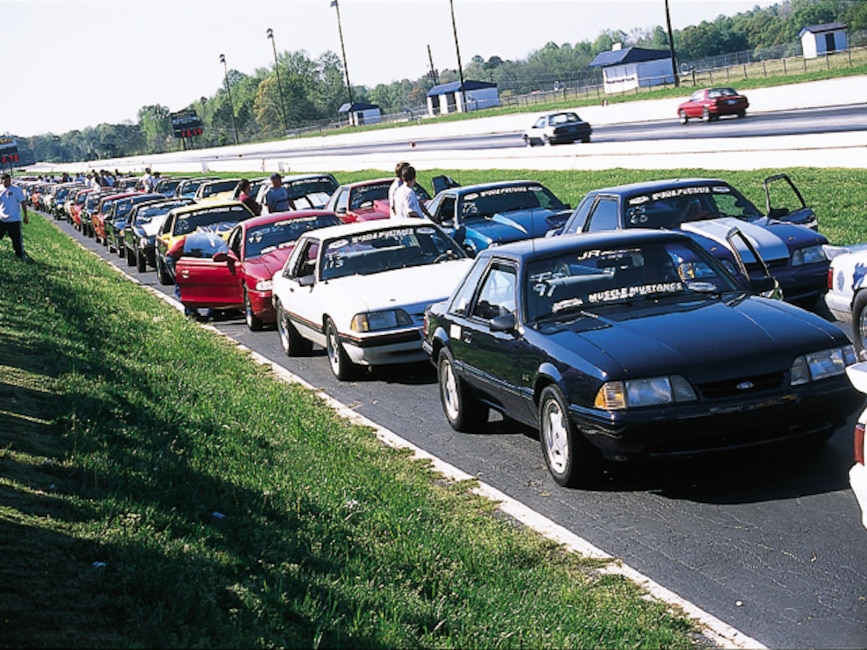 Atlanta supplied a massive amount of street-going Stangs all ready to tear up the quarter-mile. 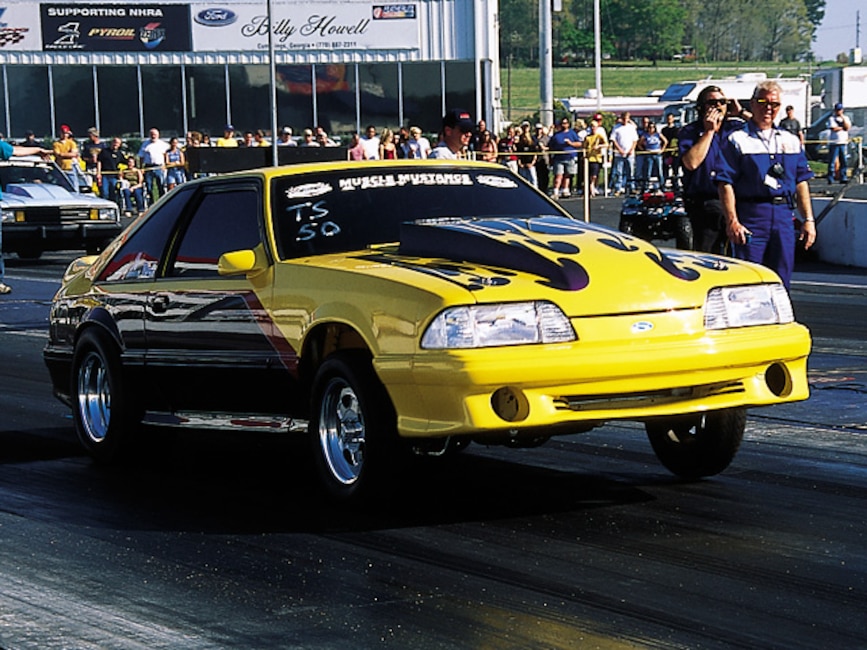 The MM&FF staff picked the '92 Mustang of Bryan Lester for the Editor's Choice award. 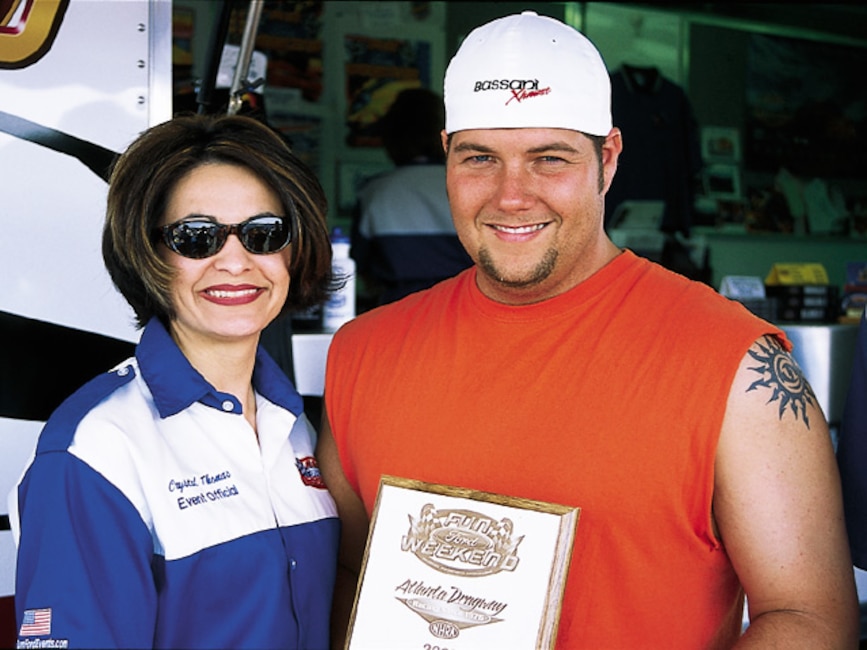 The Bonaire, Georgia, resident ended up fifth in the true street standings.

It had been raining all week long in Commerce, Georgia, and American Autosports had a Fun Ford Weekend to put on. By Saturday, however, the skies had parted and the pavement was ready to be pounded.

The pits were filled with rows and rows of heads-up shootout cars, including the wild and often unpredictable MM&FF True Street warriors. True Street competition gives anyone and everyone a chance to get some strip time during Fun Ford events. You don't need thousands of dollars to race, just a Fox Ford and a desire to blast the quarter-mile.

Saturday came and so did the sun, fans and racers. Atlanta Dragway was jam-packed full of Ford fanatics and the JBA Headers True Street class was a perfect example. With over 100 cars participating, there was plenty of high-powered hardware ready to cruise the street and blast the strip.

Saturday's 30-mile hike around the Commerce countryside had only one minor casualty, and he made it back under power. Then it was Tree time. After the popular cruise, the cars lined up on the return road and the site was quite impressive. The great weather brought out some fast cars, with the top dog being Todd Amandus of Orlando, Florida.

Todd's ride is a '95 Mustang, which sports a Lugo Performance-built 342-cubic-inch small-block Ford. But it takes more than just a few extra cubes to acquire a three-run average of 9.39 seconds, and that's why there are two ITS 66mm turbochargers pumping 20-plus psi through an intercooler and into the AFR heads. Backed up by a C-6 transmission, the Mustang's 342 is still streetable and street driven quite a bit, but Todd usually bolts on a set of 20-inch Torq Thrust 2 wheels for those occasions. Todd doesn't compete alone as he gets help from Richard Wellman, Dennis and Erica Lugo, Tom Moore and Travis Bossin. Auto Outlet, C&C Cycle and MX Mafia also support his habit.

When people ask how to get their car on the pages of MM&FF, we tell them wild paint jobs usually do the trick, and Buford, Georgia's Dewayne Stiles has the right idea with his puzzling pony. The brilliant blue and silver coupe (shown in the photos) is definitely unique and certainly fast. The '91 notchback has been stuffed with a 351 stroked to 383 cubic inches, and sniffs nitrous oxide from a Big Shot 175hp system. Paint Works and Top Performance help get the AOD-equipped pony to the track and Dewayne has no problem getting it down the 1320. Stiles posted a three-way average of 10.59 seconds.

The grey convertible of Darrel Smith and Larry Keyes' twin-turbo terror took the number three and four spots respectively. In fifth was MM&FF Editor's Choice award winner Bryan Lester, whose vibrant yellow and purple Mustang charged to a 10.92 average. A nitrous-sniffing 342 under the hood provides motivation for this frequent True Street competitor, and Bryan bangs the gears of his Tremec both at the local track and on cruise nights.

Unfortunately, Lester's Mustang had an unfortunate meeting with the retaining wall during the True Street bracket race on Sunday when the steering shaft separated leaving Bryan spinning the steering wheel like the Wheel of Fortune. Thankfully the damage was minor, Bryan and his gang plan to have the Stang back in action in a few weeks.

Lee Huffstetler nabbed low 11-second honors with an 11.20 average, but was so fast the MM&FF staff couldn't catch up with him to get the skinny on his car. Eric Dills of Young Harris, Georgia, drove his beautiful blue and silver '90 Mustang to the lowest spot in the 12-second group of ponies. His naturally-aspirated, 351-powered notchback averaged 12.08 seconds over the course of his three runs.

Sixteen cars later, we found Lee Houts taking low 13-second money with a 13.04 average. He was followed by Chad Edwards who took the 14-second group with, oddly enough, a 14.04 average.

In the True Street bracket race on Sunday, Marty Snipes, who averaged 12.73 on Saturday, met up with Lee Webb in the final. Snipes was handed the win when Webb lit up the red bulb at the starting line.

There aren't too many rules for True Street. The most important is that your car is insured and registered. It also has to complete the road tour, which can be trying for high-strung horses, but once you make it back to the track, all you have to do is race the clock. Of course, it helps to have a ton of horsepower, that way you can just go for the top spot and not worry about averaging low, but these days it takes one hell of a street car to knock out the 50-100 plus competitors at each event. Still the class allows for all kinds of cars to race and that's part of the fun--getting everyone to have a go at it. 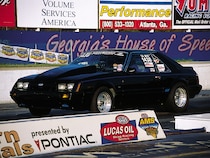 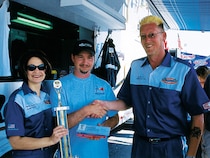 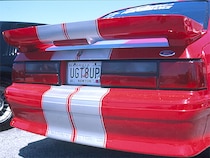 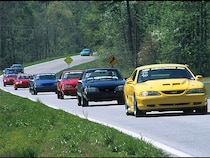 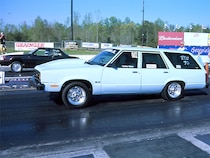 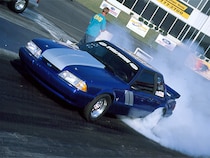 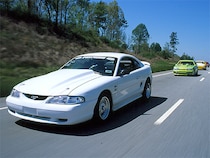 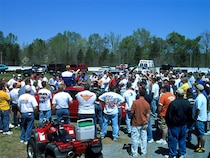 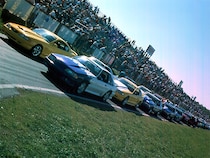