Driving through the mountains is not too bad, especially when your doing it with a Shelby GT 500 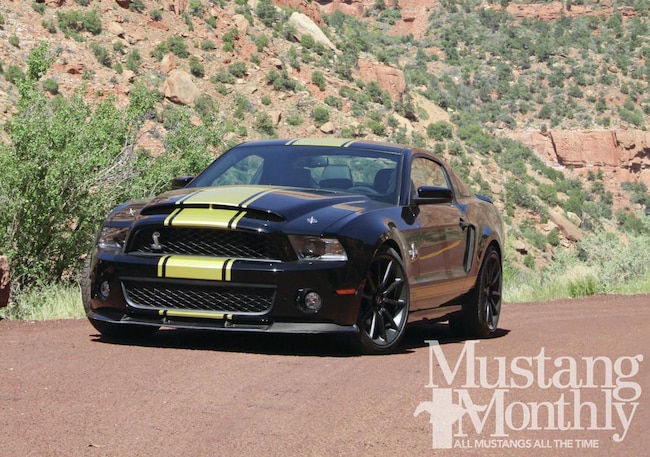 It was surely a better idea than driving the same Nissan Versa rental car that Hertz seems to have waiting for me at airports around the country. When I learned the best way to St. George, Utah, for the Mustang Club of America's Roundup at the Red Rock Corral national show was through Las Vegas, the idea light bulb went off in my head. Since the route from McCarran International Airport to St. George would take us within a quarter-mile of Shelby American's headquarters off I-15 at Las Vegas Motor Speedway, why not ask (or beg) to borrow a Shelby Mustang for the weekend?

As someone who would never be caught in something as mundane as a Nissan Versa, Shelby American's "VP of fun" Gary Patterson understood my plight and said he could arrange something for me. That arrangement turned out to be a '12 Shelby GT 500 Super Snake, in 50th Anniversary trim with 750 horsepower--just to make sure we had enough power to climb the steep mountain roads during the event's Pony Trail cruise through Zion National Park. Pam decided to make this trip with me, mainly for the sightseeing opportunities in southern Utah, so publisher Sandy Patterson dropped us off at Shelby American headquarters, where the just-completed Super Snake waited in the parking lot with less than 40 miles on the odometer.

One of just 50 in black and gold (another 50 are scheduled as white and gold), the 50th Anniversary Super Snake is dazzling with its unique hood, chin splitter, and black 20-inch Shelby/Alcoa wheels with huge Wilwood brakes peeking through the spokes. Built post-title from Ford SVT's regular production Shelby GT 500s, think of the Super Snake as a GT 500 on steroids. After swapping our luggage (amazingly, Pam's bag fit in the trunk!), we headed to I-15 for the hour-and-a-half drive to St. George. Easing out of the parking lot, I was reminded how far technology has brought us. Even with 750 horsepower, the Super Snake idled calmly, and clutch feel was light and smooth as the Shelby accelerates toward the on-ramp. 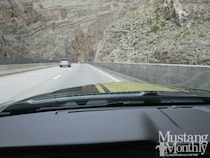 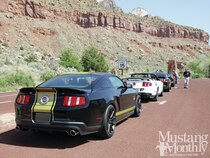 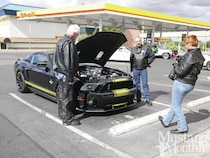 That's the Dr. Jekyll part of the Super Snake. Mr. Hyde shows up when I dip into the supercharger boost to merge with Interstate traffic. In a matter of seconds, I'm passing everything in sight--and getting that what are you doing? look from Pam. I slowed down. At least, I did until a late-model Pontiac with quad exhaust tips drove past, then backed off for another look at the Shelby before tempting me with a burst of what the driver obviously considered acceleration. I pondered: What would Gary Patterson do? In an instant I was in Fourth gear, pedal to the floor, watching the Pontiac disappear in the rear view mirror. That time I heard a vocal "What do you think you're doing?" from the passenger seat.

Otherwise, the drive through northern Nevada, then the northwest tip of Arizona is beautifully boring with nothing but desert on both sides. That changed quickly as we reached the southern Utah border and found ourselves driving through majestic red-tinged mountains. The Super Snake climbed them with ease. With Borla exhaust and stiffer performance suspension, the Super Snake's cabin is noticeably noisier than a standard Shelby GT 500, especially over rough road surfaces. But if we wanted a quiet ride, we could have driven a rental car. 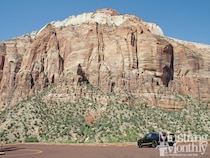 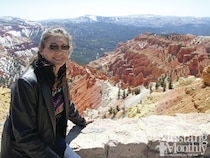 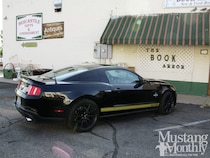 Because Zion National Park doesn't allow large caravans, the following morning's Pony Trail cruise was divided into smaller groups of Mustangs, which worked out great because we were able to stop along the way for photos. Luckily, it was also National Park week, so the usual park entrance fee was waived for everyone. The drive through Zion took us through some amazing southern Utah scenery, climbing the twisting and turning Highway 9 to 8,700 feet and through the 1.1-mile Zion/Mt. Carmel tunnel. All around us were cliffs, colorful rock-covered mountains, and canyons carved out by the Virgin River. Definitely worth the visit if you're ever in that part of the country.

After spending Saturday at the MCA show (see "Showdown at the Red Rock Corral" in last month's issue), where the Super Snake served official duty as a display vehicle for Shelby American's 50th Anniversary trailer, Pam and I slipped away on Sunday for more drive time and sightseeing in the black and gold Shelby. Heading north, we cruised through the Kolob Canyons and hiked up to View Point before stopping in Cedar City for lunch. With Pam handling map duties, we then took Highway 14 east and soon found ourselves surrounded by snow as we reached the 10,700 foot summit near Brian Head.

Always up for an adventure and not wanting to waste daylight in such a beautiful area, Pam directed us to a couple detours on the trip back to St. George. While checking out the small town of New Harmony, kids ran into yards to get a glimpse of the Super Snake as it rumbled by. And we learned that Kanarraville (population 355) had once been home to the first all-women fire department. I do learn a lot during Pam's off-Interstate excursions. We spent five days in the Super Snake, driving over 600 miles, much of it on steep mountain highways where the supercharged torque, Shelby handling, and Wilwood brakes could be appreciated. The Shelby performed flawlessly, attracting attention everywhere it went, and even astounding a couple of guys in a Pontiac on I-15. It also averaged over 19 miles-per-gallon, an impressive figure for a 750hp car. It sure beats a Nissan rental car. 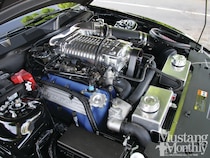 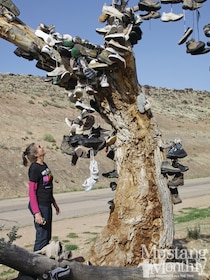 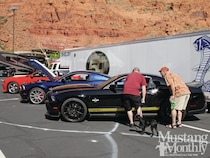 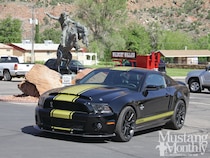 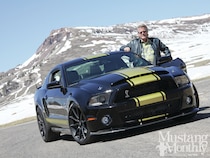 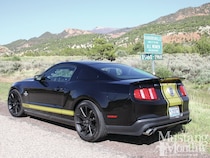