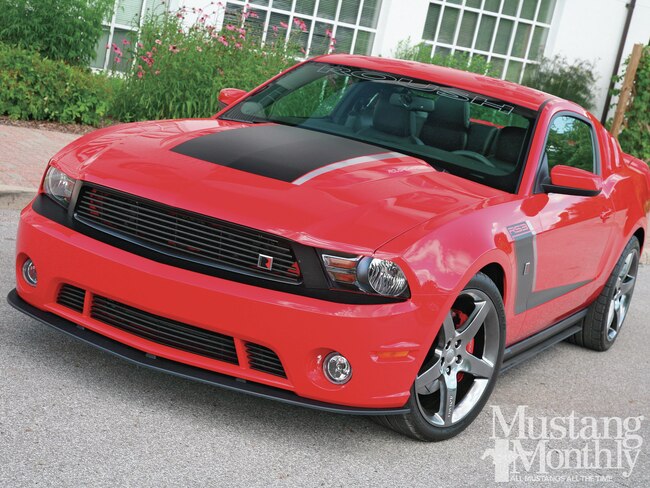 After a year off, the Roush Stage 3 is charging into model-year 2012 known simply as the RS3, now capitalizing on the basic greatness of Ford’s new 5.0L Coyote engine for a 540hp ROUSHcharged slap upside the head. Roush’s promotional tag line for this new RS3 is: “Detroit Muscle/Refined.” Was this new definition worth the wait? Let’s just say that a couple of quick days ripping around suburban Detroit in the company’s Race Red demonstrator have us thoroughly convinced that this perennial powerhouse in the Roush lineup has never been better.

We’re guessing last year’s hiatus was required to physically adapt the RS3’s 12-psi TVS R2300 ROUSHcharger to the new DOHC V-8 and, in particular, to engineer a calibration that makes this intercooled blower play well with the Coyote’s sophisticated variable cam timing capabilities. Mission accomplished—we found the ’12 RS3’s manners and behavior to be every bit as impeccable as those of an Emily Post Institute graduate. Except, that is, when it comes to any etiquette about speaking softly. We were shocked—though certainly not in a bad way—at the decidedly boisterous nature of the new RS3’s exhaust note, via a system that brings true meaning to the term “loud pedal” (and therefore must be installed, post-title, by your dealer). Punch the gas and heads are guaranteed to swivel in your direction. Yet for all its thunder under throttle, this exhaust somehow reverts to near silence when cruising, perfect for hours of freeway touring with absolutely no trace of droning for a best-of-both-worlds character. 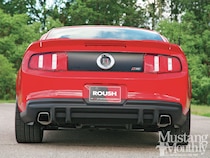 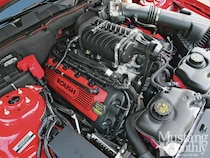 Truthfully, the split-personality RS3 can be either Dr. Jekyll or Mr. Hyde at will, depending solely upon the driver’s mood. Push it hard and you’re rewarded with berserk acceleration, race-car braking, slot-car handling, and all the aural excitement of the Bullitt soundtrack in surround sound. Yet when the mission calls for less adrenaline expenditure, this Roush is a hushed, downright comfortable daily commuter that even Detroit’s climate-mottled pavement can’t upset. It’s a civilized beast that is, overall, notably more polished and sophisticated than ever before.

Take styling, for example. Though hardly introverted, the RS3 has shed some of its boy-racer past and now comes across with well-muscled elegance—like a linebacker in a Brioni tuxedo. Details like the interior and exterior badges are now positively classy, and even the trademark RS3 stripes are passably restrained, but can now be had in a multitude of new (some metallic) color combinations, some subtle, some striking. Also, the RS3’s optional 20-inch, five-spoke rims (18-inchers are standard) can be had in either chrome or “hyper black” finish—the latter adding just the right amount of menace, in this reviewer’s opinion. We also like the new blackout treatment atop the front fascia ahead of the grille and headlights, which is visually matched with a similar blackout between the taillights. 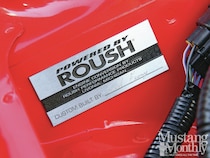 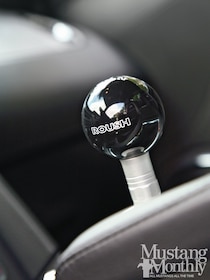 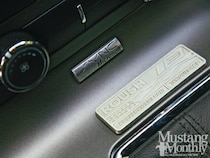 As always, the RS3’s balanced agility is assured with specific Roush springs, dampers, front stabilizer bar, and jounce bumpers, while a Competition Suspension System with double-adjustable coilovers at all four corners is optional. Brakes, too, can be upgraded with the optional four-piston/14-inch Performance Package (as on our test car), or a six-piston/14-inch Competition Package, either of which are great choices for road-course/track use, although the RS3’s standard (Mustang GT) binders are easily up to the task of any sane street demands.

Stage 1 and Stage 2 packages continue to be offered in ’12 for those wanting the looks (and in the case of the Stage 2, the handling) of the RS3, but without the intercooled supercharger. 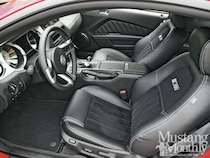 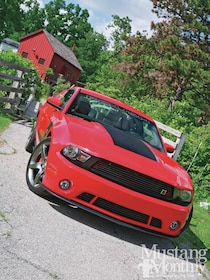 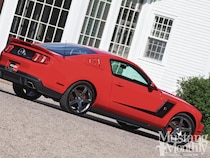 Not surprisingly, we hated giving our Race Red RS3 tester back. This is indeed Detroit muscle redefined. Let’s be honest: In the “old” days, driving a 540hp, track-worthy Mustang demanded certain sacrifices in daily driveability, comfort, and practicality, such that it would inevitably become an occasional-use toy. Not so with the ’12 RS3, which is a thoroughly refined companion for the daily commute, a cross-country trip, or a day at the track. Nice work, Jack!

RS3 Pricing The RS3 package adds $16,800 to the Mustang GT that it’s based upon, and our tester listed out at $61,227 wearing the following options:

New home of Roush Performance
Production of the Stage cars has recently moved a short distance from Roush Building 50 on Plymouth Road in Livonia, Michigan, to 39555 Schoolcraft Road in Plymouth Township—a bright and airy new facility now referred to as Building 79 on the list of Roush-occupied structures in the greater Detroit area. Conversion from Mustang GT to Roush Stage car mostly takes place in multi-station production lines in the new building. In the background above are finished Stage cars awaiting final inspection and sign-off before shipment. Business has been brisk since the ‘12 RS3 was announced back in April. 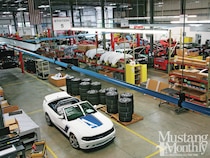 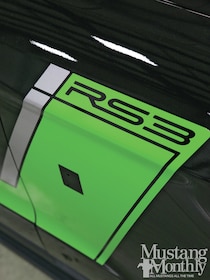 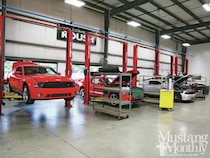