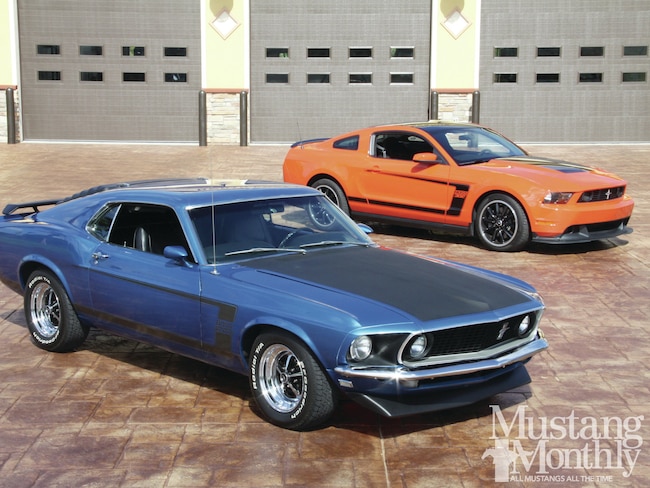 It's not easy to challenge a legend, especially one that has simmered in the minds of loyal Mustang enthusiasts for over 40 years. The Boss 302, offered in limited quantities for '69 and '70, was the ultimate in high-performance for its time. Everything about the car spoke to its purpose of homologating the unique Boss 302 engine for Trans-Am racing. You can check off the list of equipment for the fastback-only Boss: high-revving 302 with large-valve Cleveland heads and solid-lifter cam, Top Loader four-speed transmission, 9-inch rearend with nodular housing, handling suspension with staggered rear shocks, 15-inch wheels with F60x15 Goodyear Polyglas tires, front spoiler, and unique graphics. Need A/C or automatic? Sorry, not available.

And to top it off, Parnelli Jones drove a Bud Moore-prepared '70 Boss 302 to the 1970 Trans-Am championship, adding yet another notch to the Boss 302 legend.

Now the Boss 302 is back as a '12 model. Although production is limited like the original, we're already starting to see them on the street, at shows, and on the track. It's a different car for a different place in automotive time, improved by the advance of technology yet basking in the glow of the legend established by the '69-'70s.

I owned a '70 Boss 302 for 14 years, purchasing it from a South Carolina car lot in 1974 as a 50,000-mile used car. The Grabber Blue fastback served as my daily driver for several years and I can easily recall the clattering of the solid lifters, the unique burble of the dual mufflers, the precise shifting of the Hurst stick (a '70-only feature), and the wonderful surge of acceleration as the rpms climbed and the Holley secondaries snapped open. My Boss 302 was also comfortable with a Deluxe interior and eight-track stereo. Back then, I didn't miss the air conditioning.

When Ford recently dropped off a Competition Orange '12 Boss 302, I couldn't help making the inevitable comparisons. Granted, there's no comparison when it comes to track performance. Forty years of technological progress has seen to that. The factory '69-'70 Boss 302's 290 gross horsepower is no match for the 444 hp generated by the modern Boss 302, which is based on the already-impressive Coyote 5.0-liter and enhanced with a runner-in-a-box intake and other performance upgrades. In magazine track tests from the late 1960s, Boss 302s in stock trim ran mid to high 14-second quarter-miles. The best ET for my 3.91-geared '70 Boss was 14.90 at 92 mph. In Motor Trend's first test of a '12 model, the new Boss laid down a 12.3 at 115.8. My neighbor down the hall, Evan Smith at Muscle Mustangs & Fast Fords magazine, bolted on a set of drag radials and nearly launched his test Boss into the 11s with a 12.07 at 113.93.

And remember, it's naturally-aspirated. In the spirit of the original, the '12 Boss 302 is not supercharged.

So the old Boss is no match for the new Boss in terms of horsepower and acceleration. And while the engineers at Team Mustang created the '12 Boss 302, and especially its upgraded Laguna Seca edition, for the race track, the truth is that most owners, like me with my '70 Boss 302, will never turn a tire on a road course.

Without a doubt, the '12 Boss 302 is much more refined than the '69-'70s. My test car was equipped with the optional Recaro seats, so sliding in required maneuvering over the side bolster. However, once seated, the Recaros are extremely comfortable and secureùperhaps the most comfortable buckets I've ever experienced in a factory Mustang. Other than the Boss 302 emblem on the passenger-side dash and the instrument cluster with a 180-mph speedometer and 7,500 rpm redline on the tach (compared to 7,000 for the standard 5.0-liter), the Boss interior is the same as the Mustang GT.

Firing up the Boss 302 envelopes you in sound. With its industry-first quad exhaust system, the new Boss Mustang puts the exhaust note closer to the driver's ears. While standard GT mufflers quiet the exhaust at the rear, engineers purposely split off the Boss 302's exhaust flow to small, flat, hardly noticeable tips that exit in front of the rear tires. Inside the pipes, attenuation plates with 5?16-inch holes allow the right amount of sound to escape. Think of it as a controlled exhaust leak. Ford says the noise level of the Boss 302 is right at the allowable limit. If it's too quiet for your taste, the engineers have conveniently made the plates removable by removing a couple of bolts on each side.

Although it's the middle of summer in the middle of central Florida, I find myself driving with the windows down so I can bask in the exhaust tone.

When it comes to shifting gears, the '12 Boss 302 does it easier and faster than its predecessor. Clutch pedal exertion is smooth and effortless when compared to the high-effort pressure plate and flimsy linkage in the '69-'70 cars. The same can be said for the shifter. Throws are short and precise, nothing like the long throws with the old factory shifters, including the Hurst of '70. I will admit that it takes a little time to get accustomed to finding the right slots for the six-speed, especially the middle Third and Fourth gear positions.

With their large-port Cleveland heads, the '69-'70 Boss 302s suffered from a loss of low-speed torque. Not so with the new 5.0-based Boss 302. Even when I miss the Third to Fourth shift and slide into Sixth by mistake, something I do on several occasions, there's no panic to find a lower gearùthe Boss keeps pulling without complaint.

So how does it feel at full throttle? Amazingly like the old Boss, with power coming on strong at higher rpms. In fact, there's a surge around 4,500 rpm that reminds me of those old Holley secondaries snapping open in the vintage Boss. Definitely a screamer, the Boss Coyote 5.0-liter pulls right up to the 7,500-rpm redline in each gear. It's a blast to drop into Third and nail the throttle to pass a slow-moving phosphate truck on a two-lane highway. My eyes drop to the speedo and I realize that I'm climbing past 100 mph in Fourth.

It's even fun to back off the throttle as I power down the windows to enjoy the cackling of the exhaust as the engine unwinds to the legal speed limit.

My Boss test car was equipped with the TracKey accessory, a second key that uses Ford's MyKey technology to change over 200 calibration parameters in the computer for added performance. We certainly didn't have that in the 1960s. With the "red" key in the ignition, the message center warns, "TracKey Active; Track Use Only." Right. As smart as the new technology is, the computer doesn't know if the car is on the track or street, so I made good use of the red key during my stints behind the wheel. I was hoping for a more aggressive idle but the difference is barely discernable. From the seat of the pants, the TracKey seems to hurt low-speed torque. However, at higher rpms where it counts on the race track, the engine feels stronger.

I like Ford's new electronic steering for the Mustang. For the Boss 302, the settings are modified for performance driving with three modes available: Comfort, Normal, and Sport. I preferred the heavier feel of the Sport mode. Comparatively, the effort is somewhere between the grunt needed for '69-'70 non-power steering and the way-too-easy overkill of vintage power steering.

As expected, the '12 Boss 302 is a superb handler. My "test track" was the sharp S-turns leading into my subdivision, where I've "tested" everything from '84 SVOs to the latest GTs. The Boss 302 straightens out those sharp curves better than any Mustang I've driven through there beforeùand that obviously includes my old '70 Boss 302.

Before I forget, better watch that front spoiler when pulling into parking spaces. The Boss 302 is lower than other new Mustangs; the splitter clears normal-size curb stops, but just barely.

Although I sold my '70 Boss 302 many years ago, I still consider myself a Boss 302 guy. I cringed when I heard the rumors several years about Ford bringing back the Boss name on a 4.6-powered Mustang. Boss 4.6 or Boss 331 just didn't sound right. Thankfully, Ford did the right thing. They waited for a new Mustang and new engine that would honor the legend of the original Boss 302. They got it right.

It's the best Mustang I have ever driven.

With a '12 Boss 302 to drive for a week, I couldn't resist the opportunity to photograph the new Boss, with its '69-style C-stripes, with a '69 Boss 302. Trouble is, Ford only built 1,628 Boss 302s for '69, so they are especially difficult to find today. Thankfully, local Mustang club officer Pat Rego remembered Jim and Lynne Stickley and their Acapulco Blue '69 Boss from a recent car show.

Jim and Lynne bought the Boss 302 in 1999 while living in Michigan and brought it with them to North Port, Florida, when they moved south a few years later. "When we got it, the paint and undercarriage were show-ready," Jim says. "But the rest of the car was a little shaky û brakes not working right, wrong parts under the hood, and stuff like that." With help from his daughter, Jim rebuilt the engine, choosing to stroke to 331 cubic-inches for a stealthy performance upgrade underneath the stock-appearing powerplant.

After our photo shoot on the fresh entranceway pavers at the brand-new North Port Fire Rescue station, where the firefighters went out of their way to make us feel welcome, I put Jim behind the wheel of the '12 Boss 302. Having just stepped out of his '69, the comparisons were immediate, with Jim first noticing that he didn't need to muscle the clutch pedal to the floor. Like me, he also noted the short-throw shifter, the exhaust note, and the high-revving acceleration, just like his '69. He liked it.

As a side note, Jim also owns a blue Boss 302-powered '69 Eliminator, possibly making him the only person who owns both the Ford and Mercury versions of the '69 Boss 302 ponycars. 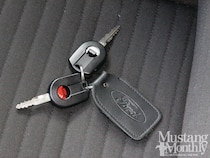 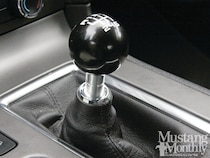 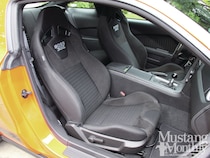 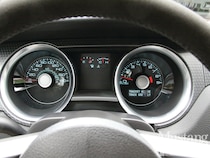 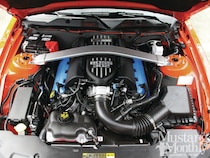 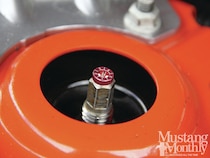 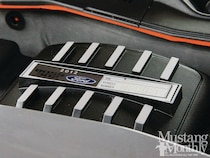 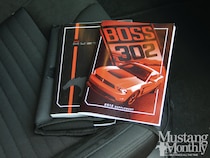 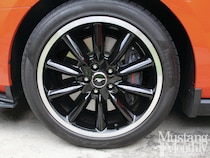 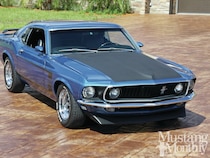 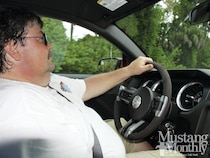 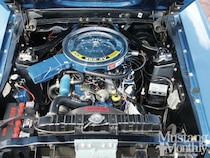