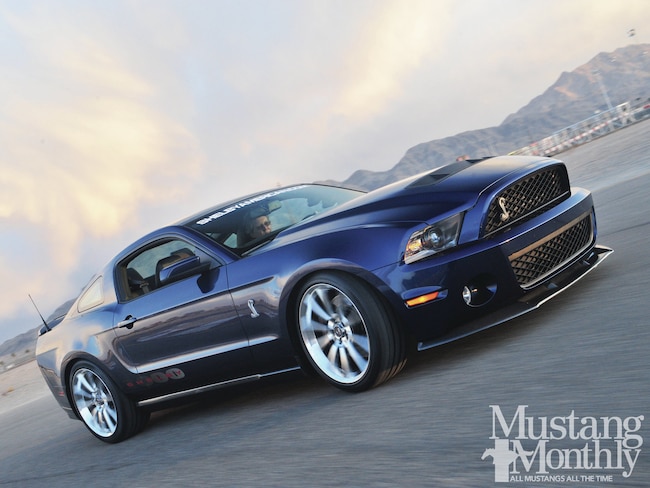 OK, I'll admit it: I was somewhat intimidated when Gary Patterson yanked the car cover off the Shelby 1000 Mustang in preparation for my test drive. Even as Gary explains the car's tame, even docile street manners, I recall my experiences in 750hp G.T. 500 Super Snakes so I know that even that level of power can get you in trouble in a hurry. The Shelby 1000 adds another 250 hp--tacking on more horsepower than an '87 5.0L HO.

The obvious question is: Why does anyone need 1,000 horsepower for a street car?

Patterson, Shelby American's VP of Operations, is quick with a response: "Some people need that just to get to work."

For the past several years, Carroll Shelby has been talking about building a street car with 1,000 horsepower. In a 2008 interview, he told Mustang Monthly, "We're in a horsepower race with the Germans. They ain't going to win it. I've got 1,000 horsepower on the dyno right now and I'll go there if I have to."

With the new Shelby 1000, based on Ford's Shelby G.T. 500, he's not only gone there, he's set a new standard for production-based builds, not only for Mustangs but also for American muscle cars. Reaching the magic 1,000hp number is certainly worth boasting; doing it in a well-mannered street package is the Big News.

Introduced during the New York International Auto Show on April 6-15, the Shelby 1000 joins the Super Snake, G.T. 350, and GTS as a post-title package available from Shelby American's Las Vegas production facility. Saddling up 1,000 hp won't come cheap; pricing for the Shelby 1000 package wasn't established at press time, but we've heard rumors about "keeping it under $150,000." 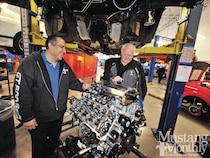 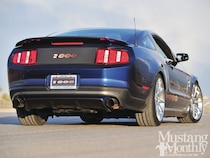 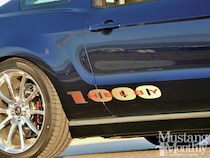 The first Shelby 1000 is Carroll's car. I was invited to drive it, not for testing purposes, I was told, because it was still under development. Regardless, I wasn't going to turn down the opportunity to experience 1,000 hp in what Shelby American claims is a totally streetable package.

The road to 1,000 hp wasn't easy. For over three years, Shelby American explored twin turbochargers, going as far as building a concept twin-turbocharged G.T. 500 called Code Red (see "Shelby's Code Red" in the March 2011 issue). "It became very complex," Patterson told us. "By the time the project was finished, the Mustang body style had changed. And with that, the Ford electronics changed again. So the target kept moving."

But it was the technological advancement in large-capacity, twin-screw superchargers from Kenne-Bell and Whipple that convinced them to switch to supercharging. "You can take one of those and run with the Ford factory electronics, so tuning becomes easier," Patterson explains. "And driveability is like a regular car. You put the key in, turn it, and the engine starts, idles at 900 rpm, and doesn't give you any grief sitting in traffic."

The switch from twin-turbocharging to twin-screw supercharging didn't erase the time and effort put into Code Red's research and development. Many of the Shelby 1000's upgrades, from beefier engine internals to the 9-inch rearend, came from lessons learned while developing Code Red's engine and chassis to handle 1,000 hp.

Every Shelby 1000 will start life as a production '12-'13 Shelby G.T. 500. However, unlike other Shelby post-title builds, the engine is removed, then disassembled and rebuilt with upgraded components to prepare the bottom end for the rigors of high-horsepower. "According to Ford, the all-aluminum 5.4L can handle 1,000 hp momentarily but not continuously," says Shelby American Motorsports' Gil Nevarez, who headed up the Shelby 1000 engine development. "With the upgraded components, you can run the engine continuously at that level." 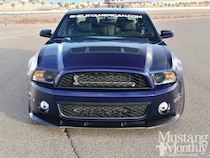 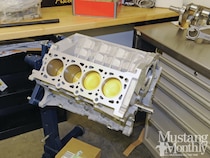 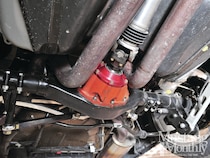 According to Nevarez, the only parts reused from the original 5.4L are the block, heads, and intake manifold. For bottom-end strength, the entire reciprocating assembly is replaced with a Ford Racing crankshaft, Carillo H-beam rods, and Diamond pistons with ceramic coating on top for heat deflection. The heads are treated to CNC porting for a 30-35 percent increase in flow before being reassembled with heavy-duty valves and Comp Cams' valvesprings with titanium retainers. Nevarez supplied the specs to Comp Cams for the blower-specific camshafts.

A 1,000hp engine produces a lot of heat, so Nevarez and his crew were challenged to control air inlet, charge air, and coolant temperatures. "C&R designed and developed a new heat exchanger core for the intercooler," Nevarez says. "It's twice the size of the ones we've been using. That, along with a 50 gpm pump, keeps the air charge temperature down so you can run 20 minutes on the track without engine detonation."

The rest of the Shelby 1000 is also prepared for serious abuse. Some of the upgraded components can be found as either standard or optional equipment on other Shelbys, but others, like the Currie 9-inch rearend, are designed specifically for the Shelby 1000. In fact, along with the engine, the entire drivetrain is removed for modifications.

"The factory 8.8-inch rearend is great but when you get to the 1,000hp level, you need the insurance from the old-style 9-inch with 35-spline axles," Patterson says. "The axles have the big 9/16-inch studs, so when you put a set of drag radials on it--and we truly hope our customers do--you can be reasonably sure that this car is not going to break."

The chassis is stiffened with triangulated bracing along the inner rockers, and the stock K-member is ditched in favor of a 100-pound lighter tubular K-member. The Shelby 1000 comes standard with Eibach's R2 coilover suspension that provides double adjustable shocks along with adjustable ride height to allow plenty of setup flexibility. There's also the full complement of Shelby suspension mods, including Watts link, billet control arms, anti-hop kit, and sway bars, along with huge Wilwood brakes.

Compared to G.T. 500 Super Snakes, the Shelby 1000 looks tame with only a taller hood dome (designed by Shelby American's Vince LaViolette to clear the large supercharger) and reflective side graphics to differentiate it from a regular G.T. 500. That was on purpose. "We've done some over-the-top styling things with cars like the Prudhomme Edition with its tilt front end," says Patterson. "But customers told us they want something that's understated, something you've got to study to realize what's different about the car."

During our visit, the Shelby 1000 was equipped with chrome 20-inch Super Snake wheels; it will get its own three-piece forged wheels when they become available.

My first drive in the Shelby 1000 is only a few feet at a time while positioning and repositioning the car for Jerry Heasley's camera. Every time, the engine fires at the first twist of the key and idles aggressively thanks to the blower-spec camshafts. Although the 3-inch JBA exhaust is not loud or obnoxious, you definitely know that something special is under the hood.

While Heasley snaps photos of the engine, I inspect the interior. Other than the trio of A-pillar gauges--boost, fuel, and oil pressure--and the white ball on the MGW shifter, there's not much difference from the standard G.T. 500, although there will likely be more Shelby content by the time the car goes into production.

Deciding that discretion may the better part of valor, I offer the driver's seat to Patterson for my first experience of 1,000 hp at full boost. Maneuvering slowly between the Shelby buildings as we make our way toward Las Vegas Blvd., the Shelby 1000 is well-behaved with no drivetrain bucking or shaking, proving Patterson's point that the car is fully capable of serving as a "grocery-getter."

At its extreme northern end, Las Vegas Blvd. is nothing like the congestion and bright lights of "The Strip." By the time you pass Nellis Air Force Base and Las Vegas Motor Speedway, the road becomes a smooth, four-lane blacktop that stretches like a straight strip of ribbon into the mountains. Patterson turns left and points the Shelby 1000 toward the horizon.

There's no need to launch from a standing start. It's a given that 1,000 hp will overpower the street tires in First, Second, and even Third gears. At the top of Third, Patterson nails the throttle and the Shelby 1000 hurtles forward under a rush of exhaust noise and supercharger whine, sounding very much like the in-car camera view of an Indy Car on TV. Peripheral vision becomes a blur as Patterson shifts into Fourth and the blue Shelby continues to rocket forward before Gary eases off the throttle at somewhere around 140 mph, although it's obvious that there's plenty more available.

"What separates the men from the boys is what happens after 60 mph," Patterson explains as the Shelby 1000 coasts down to a more normal highway speed. "That's where big power rules. We haven't tested the quarter-mile yet but it's not really set up for that. Our original Super Snake ran 10.87 at 134 on drag radials. With Shelby 1000, it's not going to be much quicker. When you get above 100 mph, that's where an extra 250 horses come in handy."

Patterson eases to a stop and we trade seats. Testing the shifter, I find that it's familiar and precise, which is somewhat comforting. The clutch pedal is firm but not overly stiff, although I notice that it takes some finesse to get the car rolling because the rpm drop quickly as the clutch engages. (In a later conversation with Nevarez, he tells me that he fixed that glitch with his tuning magic).

I take it easy in First, then dip into the boost in Second. Tire spin. Third gear produces more of the same, only it takes a little more throttle to send the rear end slewing sideways, which is a bit disconcerting at 60 mph. Easing into the throttle, the tires finally grab traction and the Shelby 1000 does what it does best as vehicle speed and engine revs climb. It's a total rush through Fourth gear, when I decide that it's best to leave the high-speed driving to Patterson.

Heading back to Shelby American headquarters, I get an idea of how the Shelby 1000 handles normal driving situations. With huge Shelby/Wilwood brakes, there's plenty of confidence in the car's stopping ability. Driving along a bumpy access road, the suspension is firm but not rough. I love the fact that the car purrs along at lower speeds just like any other new Mustang, riding and sounding like a performance car but perfectly content and well-mannered.

With its outlandish horsepower and price tag, Shelby American doesn't expect to sell many Shelby 1000s, 25 to 50 at the most. But you can bet that much of the R&D and technology will trickle down to future Shelby products, as if 525hp G.T. 350s and 800hp Super Snakes aren’t powerful enough.