A high-performance F-150 that can be bought at your local Roush dealer.

"The benchmark is 13.33," comments FPT's Editorial Director Jim Campisano. It is the performance standard set by the Gen 2 SVT Lightning, as tested by Muscle Mustangs & Fast Fords.

Many enthusiasts were disappointed when Ford killed off the SVT Lightning back in 2004. Two years ago, Big Blue teased the anxious Lightning community with a concept truck that looked awesome and seemed like a worthy replacement. Unfortunately, that truck remained a concept and never made it to the real world.

However, there is hope for those in the market for a badass F-150 truck that runs darn quick off the showroom floor. Roush Performance has released a new hot rod-Nitemare. There is no mistaking that this Roush F-150 was built to fill the needs of SVT Lightning owners. The fabled engineering company did what Ford has refused to do. It stuffed a supercharged engine under the hood of an F-150 to go after the performance segment. Cutting right to it, we ran 13.55 at 100.69 mph-and this truck has a tough attitude to go along with its quick quarter-mile status.

Ford might be shying away from a Lightning replacement because of the F-150's girth, but that didn't stop Roush engineers from moving forward with this project. Sitting in the driver's seat instantly gives you the perception of big-and it should, as our test vehicle tipped the scales at 5,270 pounds. As a comparison, the Gen 2 Lightnings regularly hit the drag strip weighing 4,700 pounds in stock trim. It's even more apparent when you toss the Nitemare into the corners on the highway. The truck has a very bulky feel to it, but it's not Roush's fault. The company is only working with what Ford gave them.

We ran a best of 13.55 at 100.69 mph and did so with a 1.96 60-foot time. That makes this the quickest pickup available today. Hemi trucks and Chevy's SS series pickups don't even come close to the straight-line performance.

The real story behind this truck is that it will crush any pickup that Dodge and GM have to offer. Dodge stopped building the SRT-10 truck, so it isn't a concern, and the Chevy Silverado SS can't come close to running with Nitemare. Another thing to consider-the Roush truck is quicker than a stock automatic-equipped Mustang. The same day we ran 13.55, a Mustang (with an auto) knocked off 13.70 runs.

Making this truck roar is the same 445hp engine that powers the Roush Stage 3 F-150 we tested previously. It's based on the factory 5.4L engine featuring three valves per cylinder and variable camshaft timing. Roush added it's RoushCharger blower, which huffs approximately 4-5 psi of boost into the engine. An air-to-water intercooler keeps the boosted air chilled before entering the Roush manifold, and ultimately, the cylinder heads. A cold-air induction system ensures there is plenty of air making its way into the throttle body.

Roush engineers spent a considerable amount of time reprogramming the factory ECM. The calibrations ensure the engine remains reliable and trouble-free over time. They could have added more power, but it would have pushed the engine past its limit during durability testing. These trucks carry factory warranties and factory emission standards, making the ECM tune that much more critical. Transmission shifting parameters are enhanced and much more aggressive than stock. A dual-exit exhaust system whisks away spent gases. Torque output is a lofty 500 lb-ft to go along with the 445 hp. Top speed has been limited to just 105 mph, so you need to figure something out if you want to take this truck to the Autobahn. 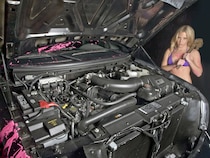 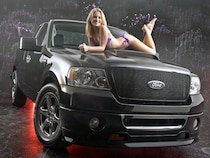 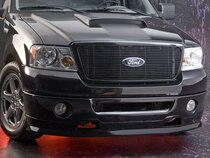 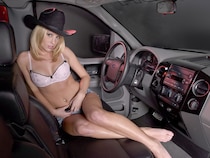 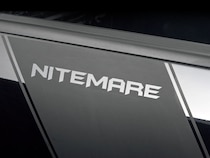 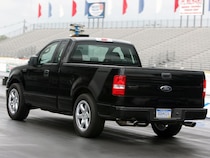 Our test vehicle has a few optional pieces, including this hood scoop. The Nitemare-as tested-comes in at a sticker price of $45,665.

Other high-performance F-150 vehicles on the market have emulated the look of the highly popular Gen 3 Lightning concept. Roush bucked that trend, going after the performance of the Lightning and sticking with the traditional look. The black paint and matte stickers go along with the Nitemare theme. A front chin spoiler adds an aggressive appearance, while all the badges have been blacked out. The wheel and tire package checks in with 20-inch rims and Goodyear rubber all around. An F-150 4X2 Roush Sport Suspension package lowers the truck and improves handling.

The interior is bare with a standard steering wheel (as opposed to a leather-covered one), manually adjustable seats, and a standard cab. Aluminum pedal covers add a little bit of shine to the interior, and Nitemare is proudly embroidered on the seats, floor mats, gauges, and dashboard. All told, our test vehicle comes in at a sticker price of $45,665.

Mid-13s at the strip is impressive, and we think the truck can go quicker with a few mods. Boost output is usually limited to 5 psi in Roush vehicles, so swapping on a smaller blower pulley will help. In addition to more boost, we would add a more aggressive computer tune and possibly a set of headers. Those mods should help this truck run in the 12.70-12.80 range with ease.

If the Nitemare is not your cup of tea, then check out the rest of the Roush lineup as they offer a variety of trucks. We covered the Stage 3 truck in the Spring '07 issue of FPT. It eclipsed the 13-second barrier with a 13.97, had a fully-loaded interior, and a supercharged engine under the hood. Roush offers seven other F-150 trucks, bringing its total offerings to nine variations of Ford's most popular vehicle. The base Sport edition has some basic upgrades, while the KTM-edition truck is fully loaded with a gamut of Roush products.

There are approximately 360 Roush-authorized Ford dealers across the U.S. and Canada-you better head into one quickly if you want a Nitemare. Roush will only produce 100. No worries-if you miss out on the limited run, you can always turn to the Roush catalog and build your own version.

The Roush Nitemare is a supercharged dream that you won't soon forget.