You've read the reports and heard the rumors on the latest Super Duty truck and all signs point to something that is too good to be true. We have driven the next generation Super Duty trucks and are happy to report that everything Ford bragged about is true. The latest rendition of Ford's wildly popular work vehicle is their best version yet. The '08 Super Duty trucks have lived up to the pre-release hype and marketing blitz. We put a few different models through their paces in some harsh conditions when Ford tossed us the keys at the Super Duty Press Launch event held in Texas.

Labeling the trip to Texas an adventure is an understatement, thanks to a surprise ice and snowstorm. The inclement weather put a damper on the schedule, which sent the Ford representatives into crisis mode. Long story short, yours truly was part of the only wave of journalists that were able to tackle the activities set up on a private ranch just outside of San Antonio. The ranch's wide-open range allowed us to experience severely heavy-load towing and extreme off-road driving. The surprise weather elevated the conditions and helped this truck shine even brighter. Sloppy mud was the order of the day as a fleet of Super Duty trucks was wrung out by 30 or so journalists.

Our (the group of media representatives) flight touched down in Corpus Christi, Texas, and we were ushered off the tarmac and into a fleet of trucks. Plans called for each truck to carry two journalists and a Ford representative. The journalists would split the driving chores on the 120- or so mile journey north to San Antonio. My first impression as I approached an F-350 King Ranch with the Power Stroke engine was, "Wow, I can't believe how quietly the engine purrs." The shock of silence faded as I climbed into the truck and shifted my attention to the extremely luxurious feel. King Ranch trucks command a sticker price in the $50,000 range-pricey-but Ford delivers the value with awesome performance and an options-laden vehicle.

An ice storm and record-breaking low temperatures wreaked havoc on the press event. Conditions on the farm (located outside San Antonio, Texas) were muddy and harsh-the perfect time for the Super Duty to shine.

Mile after mile, I was more impressed with the limited road and engine noise and the overall comfort-it was more like a luxury vehicle than a work truck. The in-dash navigation system directed us to a rest stop halfway through the road tour. The 60-mile mark was a scheduled driver swap. After a quick snack, I hopped into the driver's seat and made adjustments to the seat, mirrors, and steering wheel. The dashboard layout is similar to the Super Duty's little brother, the F-150. The side mirrors are generously sized and offer a convenient automatic telescoping and folding feature-first of its kind in its class. One gripe many of us have with the F-150 concerns some buttons that hide behind the gear selector; that wasn't a problem in the Super Duty.

The truck moved out nicely as I pulled onto the interstate and the twin turbos came alive. Those who own 7.3L Powerstroke trucks can certainly attest to the sluggish feel of getting on the highway-that is until the turbo kicks in and the torque output skyrockets. The 6.4L Powerstroke benefits from two turbochargers, a small one and a larger one, that are run sequentially. The small turbo spools really quickly and is a huge help in low speed situations. As the engine climbs higher in the rpm range, the larger turbo takes over for high boost. It is a seamless transition that makes the 6.4L engine a gutsy powerplant from the moment you step on the pedal. Thankfully, there are plenty of aftermarket upgrades for the 7.3L and 6.0L engines to keep up with the outstanding power and feel of the new 6.4L bullet. 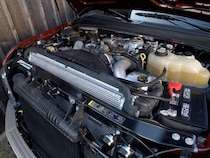 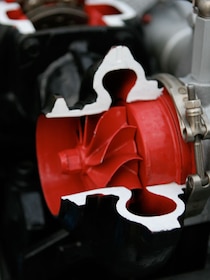 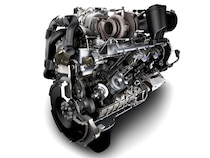 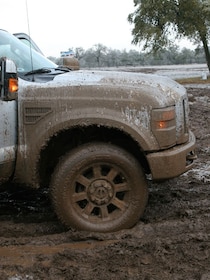 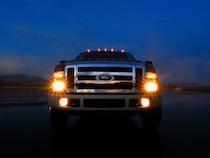 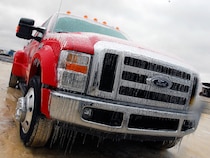 The 60-mile drive was over in no time and we arrived at the hotel, where we stayed the night before heading to a ranch in the morning. We awakened to chilly temperatures and muddy conditions-something the Ford PR group hadn't planned on. They quickly scrambled to procure dozens of rubber boots for us to wear. Due to the severe muddy conditions, the ranch was a complete mess.

Once on the ranch, I quickly made my way to the off-road segment for some fun. The course was a giant mud pit and just driving to the remote location took some skill. Mud covered the entire truck, and the tires were riding about halfway down in the dirty stuff. I put the truck in 4x4 Low and jumped on the pedal-I felt like an off-road racer in the Baja 1000.

Perhaps the most amazing feat of the day was the truck's ability to drive easily through the harsh conditions. It was also surprising that all vehicles were rolling on stock tires-not some fancy aftermarket off-road rubber. The off-road course was relatively easy for the F-250 Super Duty I was wheeling. Big hills with steep inclines were no problem. A mud pit with water up to the doors was child's play-so long as you kept your speed at 35 mph and above. Rock crawling was enjoyable with this workhorse. The course featured giant boulders, which I cruised over at a quick pace. The fast speeds tossed me around a bit in the seat, as the standard three-point harness isn't as effective as a racing-oriented five-point seatbelt setup.

The towing portion of Ford's First Drive program also showed off Super Duty's impressive abilities. A half a dozen F-450 trucks were hooked up to 24,000-pound, fifth wheel camper trailers. The sequential twin turbo system shined as off-throttle response and power was outstanding. The Super Duty comes with an internal trailer brake control system, a nice feature, considering a majority of the trucks sold are slated for trailer towing. The trailer-drive was only a few miles, but we did tow up and down the hill without any problems. Braking and acceleration were quite impressive, given the girth of the load out back.

Overall, we were impressed with the Super Duty's new look, comfort, and power. It is the same workhorse that Ford staked its reputation on and it continues to refine its market-leading product.