The Roush Stage 3 F-150 offers a supercharged truck you can buy from a Ford dealer.

Michael Galimi
February 23, 2007
Photos By: Scott Parker, Frank H. Cicerale
We figured out a few things during dragstrip testing. One was that the truck runs quicker with the tailgate up. We had started the day with it down and were stuck in the 14-oh range. Editorial Director Jim Campisano laughed at us and said if we were to run with the tailgate up, he would guarantee the Roush would dip into the 13s. He was correct-the truck eclipsed the barrier with a 13.97 on its first pass with the tailgate up. We bettered that run with a 13.93. The best 60-foot times came by launching the truck at 1,000 rpm and rolling into the throttle aggressively. With any higher rpm, the tires spun badly; any lower and the truck bogged off the starting line.

A friend once told me, "In order to testdrive a new vehicle properly you have to live in it." He couldn't have been more correct, and that's exactly what we did with the '07 Roush F-150 Stage 3. For the better part of three weeks this vehicle was our chariot for all occasions. Yours truly spent a lot of time in traffic, on the track, and cruising the streets in New York and New Jersey. By the time we relinquished the keys to the transporter guy, we had logged a few thousand miles and broke into the 13s with Roush's supercharged pickup truck.

The Roush Performance group offers a repertoire of variations for America's favorite vehicle. Their tuned-up F-150s can be purchased new from a Roush-authorized Ford dealer and carries a standard Ford warranty. While we tested the Stage 3 model, it is also available in Stage 1 and Stage 2 editions and a mildly modded Roush Sport F-150. Each Stage builds on the previous one, with Stage 3 being the baddest and the Sport being the mildest of the group. A list of optional equipment is available and special edition Stage 3 models for those who desire signature series and NASCAR versions. Roush's multitude of choices continues to carry Ford's theme of versatility with the F-150 platform. They offer something to fit a customer's unique wants and needs.

The Roush Sport has basic appearance upgrades, while the Stage 1 takes it a step further with body upgrades and a wheel and tire package. Stage 2 is a Stage 1 combo with a Roush-designed suspension system aimed at lowering the truck and improving the handling dramatically. The Stage 3 adds more muscle to the Stage 2 setup with the inclusion of the ROUSHcharger supercharger system.

The Stage 3 truck is perhaps the closest thing to a new-generation Lightning truck the public can get from the dealer. We must caution you though: don't expect to pick one up, head to the races, and start calling out the Gen II crowd. These vehicles are heavy (5,520 pounds) and will not outrun stock Lightnings. The heavy weight moniker is due to the overall size of the truck, as well as a Super Duty-like chassis that features beefy framerails. Structural integrity of the F-150 is unmatched in its class but at the cost of weight. We were still impressed with what Roush offers off the showroom floor-do not reject this truck because it is not a Mustang killer like the last Lightning generation. The Roush is every bit as sporty, classy, and cool as the Lightning. When compared with other fullsize sport trucks, such as the Silverado SS, the Roush will outrun most of them in quarter-mile competition, and this truck looks a lot better. Roush had a tough starting platform in terms of performance, but the final product is a joy to drive. The Stage 3 is only a few modifications away from running deep into the 13s or even the 12s.

The '04-up F-150 trucks have a spacious interior and are ergonomically pleasing. All too often specialty vehicles get overdone, as if the builder's goal was to impress with the amount of pieces that were added rather than the overall look of it. Not the Roush-they modified the interior using subtle, yet noticeable, accents and upgrades. It was enough to let you know some things were done but not overbearing and dominating. 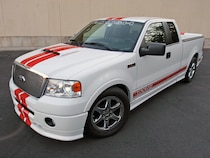 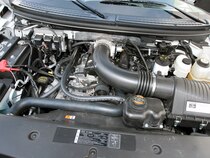 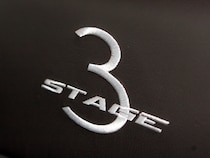 The low-slung look gives this truck a sporty appearance. The blown engine under the hood ensures that any encounters with Silverado SS trucks would prove victorious.

Dez Racing was gracious enough to strap down the Roush Stage 3 to their DynoJet chassis dyno. It spun the drums to the tune of 345 rwhp and 391 rwtq.

Moving to the outside of the F-150-gone are the all-business and boring steel bumpers. A front fascia and rear roll pan/bumper make these trucks slip through the air and look sporty. The lower portion of the front valance gives a "slammed" look. The side rocker panels extend the doors and pickup bed downward-keeping the sporty appearance smooth and continuous. A slightly noticeable rear wing (optional) has been grafted onto the tailgate. The wheelwell openings benefit from fender flares. The truck rolls on a set of 20-inch wheels with optional BFGoodrich KDW (285/55-R20) tires; standard rubbers are Cooper Zeon XST skins. Normally, a 20-inch wheel/tire package is overkill, but the gargantuan-size wheelwells gobble up the rolling stock with ease. It's hard to imagine anything smaller in there.

Things get interesting under the hood with the Stage 3 truck, as it features a Roots-style supercharger system dubbed the ROUSHcharger. Output is a lofty 345 rwhp and 391 rwtq, as tested on a DynoJet chassis dyno at Dez Racing (Seekonk, Massachusetts). Roush advertises crankshaft output as being 445 hp and 500 lb-ft of torque-numbers that are in line with the results from the chassis dyno pulls we performed. We ran the truck on Englishtown Raceway Park's quarter-mile dragstrip, and it went a best of a 13.93 at 96 mph. The overall weight puts this truck behind the Gen II Lightning in terms of performances, despite the Roush engine combination making similar power-345 rwhp for the Roush and 330 rwhp for the last Lightning truck.

Perhaps the most refreshing observation we made during our test was the presence of a blower whine in a Ford truck. The ROUSHcharger is an Eaton blower (with intercooler) designed for this application. Under hard throttle the blower whine is quite reminiscent of our favorite SVT product. We called Johnny Lightning Performance to ask what aftermarket options were available. Head-honcho Johnny Lightning told us that if we owned the truck he would recommend adding long-tube headers, a better exhaust system, custom tuning, and different blower pulleys to up the boost. Those mods would certainly bring output to around 400 hp at the tires. Not a Corvette killer, but the Roush F-150 would certainly get a kick in the pants and run deep into the 13s, possibly 12s, depending on traction.

A supercharged F-150 from Roush Performance is available from any of the 360 Roush-authorized Ford dealers in the country. Checkout the Web site (www.roushperformance.com) for a dealer near you-and try not to leave any tire marks when you pull out of the dealer lot.