Ford invited the media and MM&FF out to Los Angeles November 29, for its 2014 Fiesta press launch at the LA Auto Show. Media gurus swarmed all over various new makes and models from a multitude of manufactures, evaluating each key new detail. Each manufacture had something to stick its chest out about, but undoubtedly, Ford reigned king. To show us exactly what the new Fiesta was all about, Ford sent yours truly, on an 80-mile drive throughout LA the day before the launch. I must admit however, at first I was quite skeptical as to what the potential offering was from Ford’s first-ever 1.0-liter, three-cylinder, turbocharged engine.

Before going into detail with how my drive went, I think it’s important to mention the new features of the Fiesta. Aside from the afore mentioned, what makes the Fiesta so unique is that it is projected to be the most fuel-efficient non-hybrid subcompact in North America, expected to exceed 40 mpg. The little 1.0L EcoBoost engine boost out an impressive 123 horsepower, and is mated with a manual five-speed transmission. Some new and notable features are the MyKey programmability, which limits speeds and audio levels, the available SYNC with the MyFord Touch 6.5-inch screen, optional leather-trimmed seats, powered moonroof, heated mirrors, and an ambient lighting system with seven color choices. 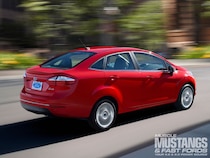 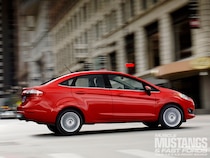 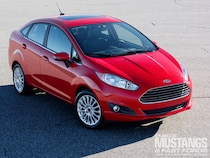 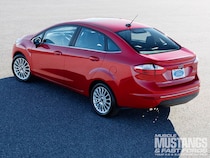 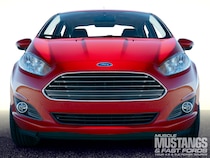 Moving onto the drive, it started out with basic city driving, stoplight to stoplight. The light, comfortable and smooth drive of the brand-new Fiesta was a nice breach of the normal Mustang driving that I am accustom too. Making my way on to the freeway, I was finally able to see what this Fiesta could do. With my foot planted to the floor, the turbocharged EcoBoost engine pulled steadily through second gear and into third, all the way to redline. Slowing it down into fourth and coasting into fifth, I was very impressed with the smooth transition across the rpm range. My skepticism from before was no longer present, and the Fiesta had my full and undivided attention.

Halfway though the drive, drivers were required to stop and test the suspension and handling of the Fiesta. Ford set up a closed autocross course for the media. Before I could indulge myself, drivers were required to drive a slew of competitor vehicles, such as the Honda Fit and Toyota Yaris. I gave the two competitors their evaluations, but wasn’t very impressed. I made my way back to the Fiesta, anxious to see if it would prove better than it’s competitors, and immediately pulled up to the starting line. Speeding my way through the sharp turns and corners, and hitting the brakes when needed, not once did I notice any under or over-steer. Body-roll was greatly less than the others, and the powerband through second gear and partially third, prompted for a faster finish. The difference in performance between the vehicles was so drastic, I instantly new Ford was going to hit big with its new product. 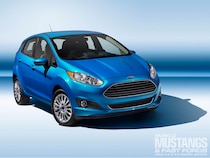 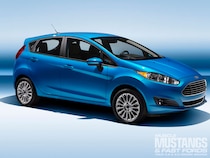 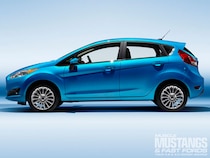 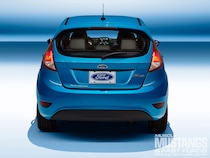 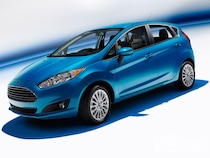 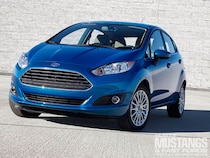 The sun was beginning to set and it was time to make way back to my hotel. On my way back, driving conditions were a bit more radical as we drove through the mountains. This is were the braking and handling really shined. As we entered the hotel parking lot, I glimpsed down to the fuel gauge, expecting to see a half-tank worth of gas burned. Surprisingly, a quarter-tank of fuel had barely been used, even after the aggressive nature of the 80-mile drive. The estimated EPA holds truth to its proclamation, and overall I must express my enthusiasm for such a compact, fuel-efficient, and performance driven vehicle.

The new 2014 Ford Fiesta will go on sale next year and will be the first vehicle available in the United States with Ford’s award-winning 1.0-liter EcoBoost engine. Ford will offer eight vehicles rated at 40 mpg or higher – double today’s total, and more than any other automaker. 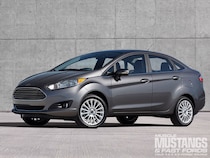 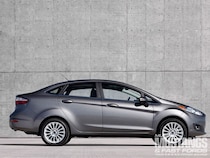 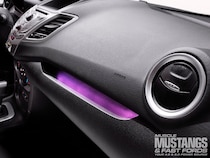 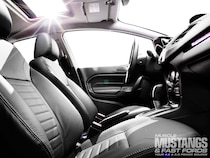 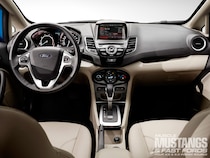 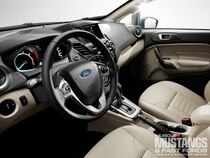 The car that was really burning my noodle was the 2016 Ford Mustang EcoBoost, which instantly satisfied all of my qualifications. Check out this dragstrip test!