A steed for every need! 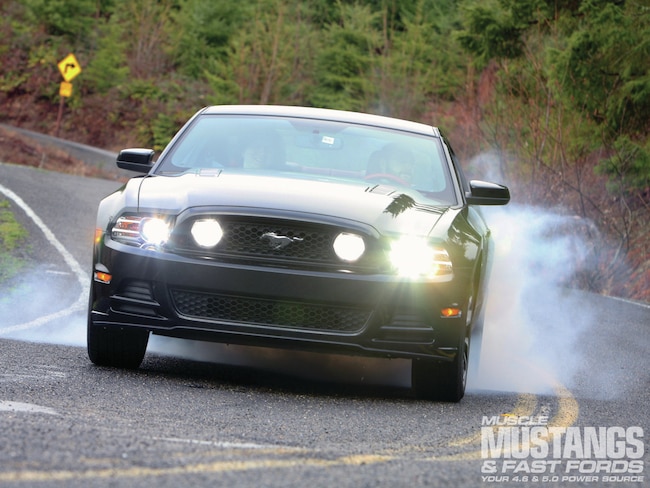 "A steed for every need," is how Chief Engineer Dave Pericak described Team Mustang's goal for the 2013 model year.

What began as a "secretary's car" nearly 50 years ago has become a car for everyone from secretaries to CEOs. Every iteration over nearly five decades has contributed to what Ford has just released--the best Mustang ever.

Other than taking styling cues from the '10-12 GT500's front fascia, the new Mustang is anything but a copycat. LED and HID lamps front and rear, 12 wheel choices, a more prominent front end, heat extractors on the hood (GT model), and a redesigned rear fascia come together to give the Mustang subtle, but functional improvements.

The leading and most noticeable feature is the redesigned front fascia and grille. More aggressive, this leading panel houses a more prominent splitter, larger lower grille open-ing, larger running horse, and LED foglamps (GT). Flanking the grille are standard HID headlamps surrounded by what Ford calls Signature Lighting. These two individual LED bars are part of the headlamp assembly and they stay illuminated both day and night, so the Mustang's approach is unmistakable. 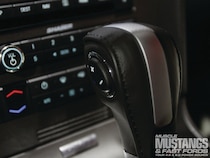 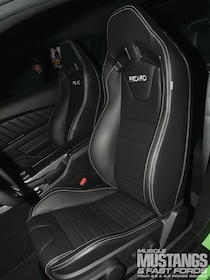 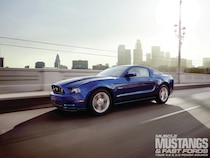 Along the side, the rocker moldings are now painted body color for a cleaner, more finished look. Wheel choices have been increased drastically--12 options in all--and even the V-6 comes with 17-inch wheels standard. The GT's hood now has functional heat extractors. And side-view mirrors even get an upgrade with a heated option and an optional a pony projection lamp, which casts the shape of the Mustang emblem on the ground as a courtesy lamp.

Out back, things have gotten much better for Mustang. The all-new taillamps are much more dramatic and aggressive, treated with LED lights throughout, smoked lenses, and a gloss black applique between. This look is much improved over the previous model, and reminds us of the '12 Shelby GT350 that was so appealing to us last year.

The 3.7L V-6 and 5.0L V-8 engines aren't going anywhere for a while, and neither are the current transmissions or 8.8-inch rearend. But Ford did give the existing V-8 a boost from 412 hp to 420 hp--a slight increase attributed to the elimination of the piston squirters and a slight calibration change, according to Pericak.

One thing Ford has been missing the boat on is shift-on-the-fly technology. The new SelectShift feature on all automatic-equipped cars solves that problem with +/- buttons on the shift handle, though we would have preferred paddles on the steering wheel. Shift response is quick and concise, and the hand-on-the-shifter driving position is comfortable and natural.

Definitely the best performance upgrade is the GT Track Package. Only available on manual GTs with 3.73s, this package adds an engine oil cooler, upgraded radiator, performance friction brake pads, and the Torsen differential shared by the Boss 302. If you can't afford a Boss, then this is the next best thing. (Make mine with the Track Package in Gotta Have It Green and stick a fork in it. Oh, and leather-wrapped Recaros.) 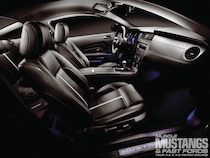 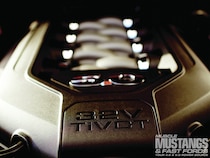 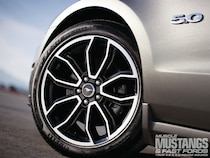 Inside the new Mustang is where you really feel the change. The optional leather Recaros are welcoming, comfortable, and supportive. You still can't get them with power but who cares. Between the tach and speedo is a 4.2-inch LCD screen, housing a slew of information and tools. And the Shaker audio system has some improvements, including the Shaker Pro option with nine speakers.

Though the popular Shaker audio system is better than the generic stereo, it was always missing something and sounded flat. Now, not only is the Shaker upgraded to eight speakers and 330W of power, but the optional 550W Shaker Pro system offers nine speakers and bass below the range of the human ear, making the musical experience engaging and enveloping. SYNC is now capable of AppLink, which allows you to link your favorite apps like iHeartRadio, NPR News, Pandora, and Twitter to the car's stereo system. 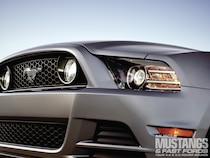 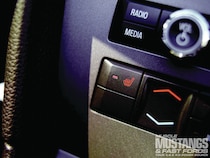 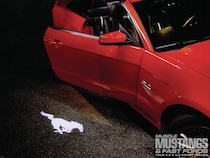 The seating options start with the standard cloth, and Premium package versions get leather-trimmed seats, available in an array of colors. Heated seats are optional, as are the Recaros. Available in either cloth or leather, these are available as an option on all V-6 and GT models--not just the Boss and GT-500.

The productivity screen is a 4.2-inch LCD located in the center of the instrument cluster. It allows the driver to monitor real-time coolant temp, air/fuel, cylinder head temp, oil temp, and many others. It also provides normal information like fuel economy and odometers.

The best feature of the screen is TrackApps. It allows you to measure g-forces, acceleration times (0-60, 0-100, eighth-mile, quarter-mile), and braking performance. It will save your all-time best, and there's even a tree to count you down before starting your quarter-mile test. A five-way button on the steering wheel controls everything so you can keep your hands on the wheel at all times.

When the S197 Mustang was released in 2004, eight years ago, the '05 model year was innovative and new. By shelving the outdated-by-far Fox platform, Ford's new "retro" body was a homerun. Not only did the youngsters love the progressive styling, but the Blue Oval brought back once-lost customers that longed to feel that emotion that was lost somewhere between the mid-'70s re-badged Pintos and the "Ice, Ice, Baby" video.

The General had already ceased production of its F-body (Firebird and Camaro), and Chrysler (or whoever owned it at that time) hadn't produced a ponycar since '74. No matter, as Ford soldiered on with what has now become the star in a ponycar race, with both rivals vying for their own share. Iterations like R/T and SS have forced Ford to continue its assault with better styling, quality, technology, comfort, and power.

A less-than-desirable slight rear body modification on the '10 Mustang overshadowed a metamorphic leap in interior styling, quality, and comfort. The nose had become more aggressive, and the engine in the GT was now pumping out 315 horsepower. The V-6 model was still anemic, as it barely got out of its own way without a tailwind.

Rumors swirled for over a year about a new engine bearing the 5.0-liter displacement that was so popular through the golden years of the Fox-body. Then, Ford made the announcement that the Five-Oh would be back in the '11 GT--and with 412 hp. We were all excited about this revelation--finally. Soon to follow would be the '12 Boss with 444 hp, and the V-6 was even a contender with 305 hp--the same as a '98 Cobra and more than an '05 GT.

The race is on in the ponycar segment, and Mustang is accelerating exponentially. The '13 is surprisingly different, in looks and feel. The GT is more powerful and poised, new options are countless, and up-to-date electronics and technology are spot-on. This is the best Mustang ever--undisputed.

There's no doubt that the last generation of Taurus/Five Hundred lacked mass appeal, especially to those looking for a thrill ride. But when Ford released the brand-new platform in '10 and offered up an EcoBoost SHO version, we tuned in. If you remember, we track-tested one and it ran 13.80s in the quarter-mile right out of the box. With 365 hp, it was the most powerful Taurus ever.

Although on the same platform, the new Taurus has been massaged and refined to be even better. We had the chance to drive it and the Flex on our trip to Portland to drive the Mustang. "It's a true showpiece for Ford," remarked Bill Gubing, chief engineer for Taurus.

All-new on the exterior are the hood, wider grille, lower front fascia, larger wheels, sleek headlamps, decklid, and taillamps. Everything inside is either new or improved. Small touches like the wrapped pillar trim, four-way adjustable headrests, and improved switch feel give Ford's flagship sedan a shove toward luxury.

Even more noticeable, though, are the improvements in driving dynamics. EPAS is now standard on all Taurus models, braking has been improved, and the suspension has been completely retuned. This car is comfortable and fun to drive.

In the SHO realm, power output is steady at 365 with a class-leading 25-mpg highway. The wheels are now 19 inches in front and 20 inches in the rear, and the brakes are larger all the way around. The best, though, is the SHO Performance Package. This takes your SHO to the next level with a recalibrated EPAS, sport-tuned suspension, better radiator, retuned stability, 20-inch wheels on all four corners, and a 3.16:1 final drive ratio for more aggressive launches and acceleration.

The crossover craze has become more than just a fad. These car-based, multi-use vehicles have been dominating the SUV market for years now, and truck-based utility has faded. Fuel economy, ease of entry, and driving dynamics give crossovers an advantage over their clumsy cousins.

Ford has a full line of crossover SUVs ranging from the Escape all the way up to the Flex. More than just a fancied-up sedan, the Flex is a direct replacement for large SUVs like the Excursion and minivans. With seating for seven, it can haul the whole family and all the luggage, sports equipment, groceries, or home improvement materials.

The Flex has the highest retention rate of all Ford vehicles. In fact, over two-thirds of its owners go back to Ford to buy another vehicle after owning one. Yeah, it's unique looking, but it "appeals to people who want to stand out in the crowd," says Flex Chief Engineer Tom Ozog.

We also had the chance to drive the Flex, and we chose a Limited model with EcoBoost. Other than feeling heavier, it was almost indistinguishable from the handling and acceleration of the SHO. It was poised, powerful, and gave us driving confidence like no other SUV.

The exterior and interior have both been upgraded for '13, but the real improvements are in driver comfort and feel. Acoustic absorbers make the ride quieter, interior advancements give the driver and occupants a luxury experience, and performance upgrades make it fun to drive.

The 3.5L EcoBoost engine, like in the Taurus SHO, has been improved to 365 hp and 23 mpg highway. Braking power has been increased front and rear, and Ford even added inflatable seatbelts and rain-sensing wipers.