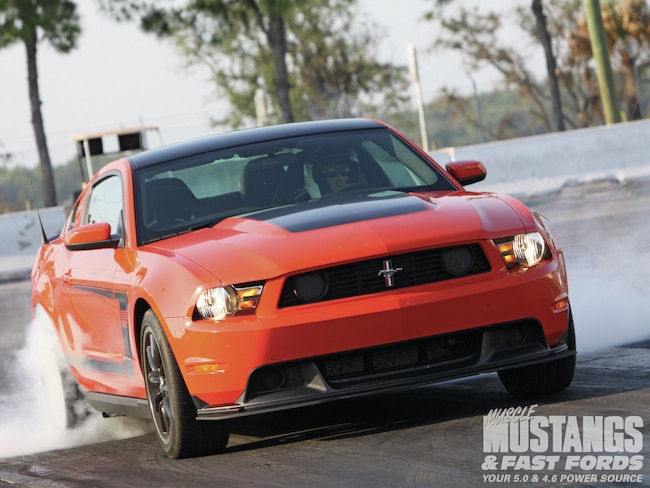 Moments after cracking the key in the '12 Boss 302 Mustang at the famed Laguna Seca (Mazda Raceway) in Monterey, California, I recognized the potential of this specialty Mustang.

It melds Ford's muscle car and racing heritage with a slathering of high-performance technology rarely seen in a production vehicle. I desperately wanted to dive in to the potential, and I soon had my chance.

That first meeting between Boss and I was fantastic ("Boss Therapy," June '11). I exercised the Pony's corner-cutting abilities and fantastic braking, but I really wanted more seat time on the street and strip. The green light came as Ford delivered the first Competition Orange tester to our Tampa facility.

While boost is cool, I have a thing for naturally aspirated power, and Mike Harrison, V-8 engine program manager at Ford, and his crew gave the Boss the heart of a lion. It has 444 glorious horsepower, endless revs, and with the sidepipe baffles removed, there isn't a better sounding new car on the road. (If technical data is what you're after, please refer to the aforementioned June issue of MM&FF. This story is about emotion and feel.)

The Boss Mustang plays to all your senses. It makes the right sounds, has the right feel, and you can almost taste the high level of cornering grip and braking power, as well as the smoothness. If you're not at redline, you want to be there. The Recaro front buckets cradle you, and the Alcantara-wrapped steering wheel has the softness of a beautiful woman. The pedals are placed nicely and have a smooth, perfectly modulated feel, and the steering is the best Ford has offered. You feel connected on many levels. Yes, I've become one with the Boss.

But I digress. The new Boss 302 is fashioned after the original, a special package sold in 1969-1970, with enormous Cleveland heads installed to provide homologation for the Boss 302-powered Mustangs used in Trans Am racing. Parnelli Jones piloted a Boss 302 to the '70 Trans Am championship, a series that carried massive weight for the time. His win in 1970 remains a milestone achievement in American racing history.

Point being, the Boss 302 was never designed as a straight-line shooter-but don't be fooled. The engineers at Ford care greatly about acceleration. And while they secretly crave hardcore strip numbers from their Mustangs, they prefer to build all-around performance Stangs with a balance between cornering, acceleration, braking, and ride quality. Harrison and his team have masterfully crafted a fantastic engine that screams like an all-out racer, yet is docile and ready for the daily shuttle about town.

Drag racing can be raw, but it's extremely accessible, safe, often affordable, and a great way to enjoy your Mustang or fast Ford. You can't beat the instant gratification gained from seeing your results in a matter of seconds-especially after you make some mods. Throw a clutch and shifter into the mix and the driver becomes a direct link to the acceleration process, one that can make a difference when you're jammin' gears at 7,500 rpm!

Our task was to cover the 1,320 as quickly as possible, utilizing each of the 444 hp and 380 lb-ft of torque. But before hitting the strip, we removed the exhaust baffles on each side. According to Ford, ditching the baffles does nothing for performance, but it does everything for the driver's ego. It's raspy growl is nothing short of magical.

Back behind the wheel, we were southbound on I-75 heading to Bradenton Motorsport Park in Florida for an open track night. The air was thick (89 degrees and 85-plus percent humidity) and there was a slight headwind, but we didn't care. BMP's staff prepped the track, while we traded the stock Goodyear rubber for our Mickey Thompson 275 ET Street Radials. Our anticipation was high as we all wondered what the Boss could do. Associate Editor Marc Christ handled the tire swap, while I set up the cooling fans and we also prepared our video gear. 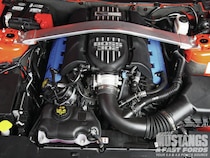 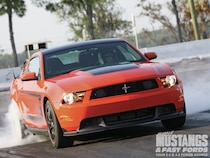 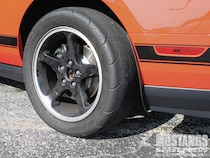 Finally, it was go time. I inserted the "Red" key, which unlocks a series of calibration parameters in the computer, such as snappier throttle actuation, over the standard ignition key, and I disengaged the traction control before I laid down a short Second-gear burnout. Shallow staged, I revved the 302 to 4,000 rpm and let it fly with a quick, controlled release of the clutch. The M/T tires dug in hard and the nose climbed, all of which caused the Boss to bog. The launch wasn't optimal, but the power came on quickly and the tach went zipping towards redline. The factory-modded 5.0L mill is "totally beast," acting like one of much grander displacement. It flat pulls and sounds good doing so. At 7,400, I nailed Second, Third, then I held on for a stint before ripping it back one more time. I went for Fourth, but sadly, I got the busy signal! Not happy, I jammed it quickly in gear and cruised to a not-so-stellar 12.42 at 110 mph. Thanks to the extra 500 rpm offered with the Boss, shifting into Fifth was not necessary. Despite missing a gear, the run was still 0.01 quicker than I ran in mineshaft conditions in a stock Terminator. That's amazing. Hey, we're not dissin' the beloved SVT Cobra-just sayin'.

Assuming you don't melt the clutch down on launch, hot-lapping the Boss won't harm it. It made max power (401) on our Dynojet at operating temperature; knowing that, I went right back to line.

This time I was "in the zone, chief." After another quick burnout, I staged dead shallow and jacked the engine to just under 5,000 rpm before cutting it loose. I traded feet more aggressively this time, but I didn't use a total clutch dump. I got the clutch out quickly though, with an assertive motion, and just as I felt the weight transfer from front to back, I matted the gas. Boss and I were off and running with nary a chirp from the M/Ts.

With the power "full-on" the nose stayed up; just before redline, I kicked the clutch and ripped the stock shifter back for all it was worth. There was a mighty bark from the tires and before I knew, it the engine was back at redline. I rammed my hand nearly straight forward to get Third and then straight back for high gear. This time the call went through and I was rewarded with a 12.07 at 113.93 mph.

We tried our best to shave that precious e.t., using a higher launch and adjusting the front struts from the stock setting of "3" to the loosest setting. We even clocked a 1.73 60-footer on one pass, but the weather was not playing to our favor. By 8 p.m. you could wipe the moisture off the car with your hand. Engines can't burn water, so the deluge of humidity killed any chance at 11s. Our next-best run was a 12.08-on that run we did crack 114 mph, but I attribute the speed to the lack of a headwind that we faced earlier in the night. Still, 114 mph is not too shabby for a 3,800-pound stocker with no power adder.

Ford not only captured the essence of what the Boss stands for-it has clearly overachieved. This model has everything you'd expect from a modern performance car and then some. It is truly a driver's car that will attack every cell in your body, whether you're on a famed road course, cruising the beach, or your favorite dragstrip. Add 4.30s, slicks, skinnies, and a tune and mid-11s would be a breeze!

I drove the Boss 302 for the better part of two weeks and don’t even remember turning on the radio (okay, maybe I did crank my iPod). It turns heads and makes you feel like you own the road. With it’s tunable steering, adjustable dampers, throaty pipes, and grippy brakes, the Boss is oh-so racy, but oh-so civilized. The Boss is definitely back—and I want one now!