Rebirth of a legend 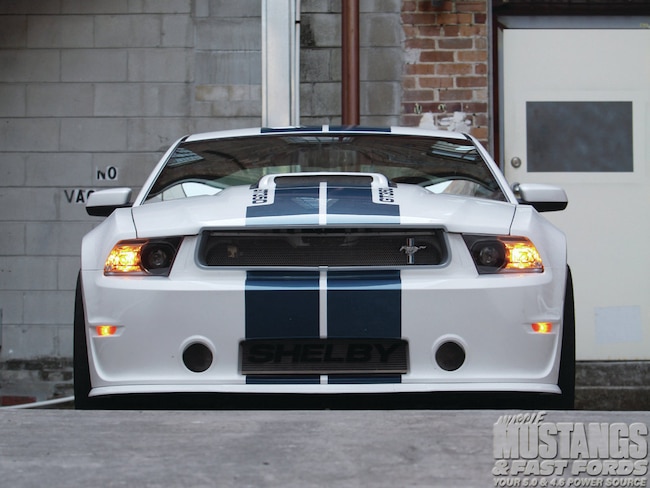 When it comes to automotive icons, few rival the '65 Shelby GT350. Just 562 examples were produced and they terrorized the SCCA's B/Production class with a hopped-up version of the small-block 289, a modified suspension, and very racy looks. After a 37-year hiatus, the Shelby GT350 returns with 624 hp--more than double the horsepower of the original!

Carroll Shelby first drew up plans for the '65 GT350 Mustang to be road raced after his success with the mighty Cobra. He succeeded, as the '65 GT350s proved to be a force on track and off. It goes without saying that the early Shelbys garner much attention--GT350s and GT500s sell for outlandish money and have reached the summit of collector car status. Each '65 was Wimbledon White with Guardsman Blue Le Mans stripes. Today a documented GT350 can fetch upwards of $250,000.

In the years to follow, Shelby produced a variety of models and color options. From '65-'67, Shelby built the vehicles, then Ford took over production in 1968. Shelby Mustangs sold through 1970, then the connection between Shelby and Ford fizzled out--until 2007 and the re-birth of the GT500. It's four years into that run and GT500s are as desirable as ever. In fact, we're quite sure there will be a 650hp model for 2013.

This success has allowed Shelby American to expand its line of Shelby Mustangs to Ford-built (Shelby GT and GT500) and post-title versions prepared by Shelby Automobiles in Las Vegas (and select facilities). They include the Super Snake, Terlingua, CS6, GTS (V-6 or V-8), and now the GT350. And like the original, the '11 (and soon-to-be offered '12) models are tweaked and tuned to go fast, turn, and stop on a dime.

Utilizing the hot 5.0-liter Ti-VCT engine, Shelby offers the GT350 with unique bodywork, a jazzed interior, seriously enhanced suspension, and brake upgrade. Our tester was in the most classic hues (which is the only color scheme for 2011). It sported the mac-daddy 624hp supercharged 5.0L engine and every available option, included painted stripes for $4,999.

The latest GT350 will be built in limited production, so the opportunity of owning a rare Shelby still exists--but it's no guarantee that they will be worth hundreds of thousands of dollars. The base supercharged GT350 will set you back $33,995 MSRP ($26,995) if you forego the blower. "We brought back the GT350 45 years after it was launched," said Carroll Shelby. "We're repeating history by offering two additional colors and building a few convertibles for the second year of production." Color combinations include Performance White with blue stripes, Race Red with white stripes, and Kona Blue with white stripes.

Each GT350 wears a racy front fascia that nicely captures the mid-60s-style grille that flows into a contemporary bumper/air dam that's molded with a huge inlet for the heat exchanger, functional brake-cooling ducts, and a sharp splitter. Shelby also replaces the stock hood with a bulged and scooped version, and it adds classic GT350 body stripes just above its rocker skirting. "GT350" is emblazoned on the hood, which we feel is an unnecessary treatment. The rear is completely revamped with a bold taillight treatment that is unique to this car, and the lower rear fascia is cut out for the rear center-mounted exhaust pipes. The interior is also amp'd with reskinned seats, steering wheel, and shifter boot (all of which is optional), and specific serialized badging. Rather than using a dash-mounted gauge pod, additional round gauges are mounted on the A-pilar. Most who sat in the GT350 were not fond of this, as it placed the gauges too close to the driver's head.

Shelby provided us with the 624 gross horsepower upgrade (which voids the factory powertrain warranty). Other engine options are a cold-air inducted naturally aspirated version and a 525hp blown model. An automatic transmission is only available with the N/A version. 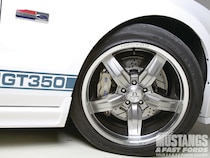 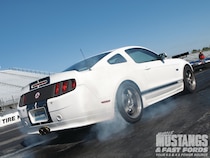 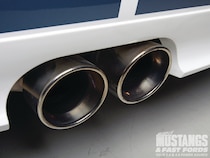 Our tester produced 519 rwhp on our in-house DynoJet, and created quite a stir on the street and at the track. At Gainesville Raceway, it blasted to an 11.62 at 122 mph on the grippy 265/40/19 Goodyear F1 Supercar G2 tires. We lapped the Steed during a test-and-tune night at Bradenton Motorsports Park on Mickey Thompson drag radials and ran 11.55 at 120, albeit in hotter, more humid conditions.

Power is enhanced by a Ford Racing Performance Parts supercharger and a Shelby-specific after-cat exhaust, which sports nifty center-exiting pipes that sound spectacular. Shelby captured the classic raspy Ford sound--it purrs nicely at cruise and part-throttle but screams out a beautiful note at WOT. It is much louder than stock, and reminiscent of Frank Bullitt's '68 Mustang, it makes that really cool gurgle on deceleration, which we loved.

After our straight-line testing, we slithered around the road course at Gainesville Raceway in bold, racecar-like fashion. From the get-go the GT350 dug in and performed. The tuned FRPP/Shelby suspension, combined with a Shelby Watt's link kept the Mustang flat and neutral, and the aforementioned Supercar tires mounted on Cragar 19-inch wheels provide loads of grip. A major asset was the Baer six-piston front brakes, which performed as good as any we've encountered. The modulation and feel was to our liking and there was no fade to speak of. The braking system is helped by large cooling ducts that blow air over the calipers and rotors. Shelby does equip the GT350 with Eradispeed rear rotors, but our tester had stock rear brakes to allow us to use 16-inch wheels for the strip.

It is flat-out a blast to drive and the level of performance is amazing. The performance and feel is above what you'd expect from a street-legal Mustang--it's one of the best handling Mustangs we have ever tested. It was amazing to be able to brake so hard (and late) and turn in so aggressively with full control and no slip. I was able to roll back to the throttle much quicker than with other cars to utilize all the power from the supercharged 5.0L. That translated into big speed at the end of each straightaway and big smiles all around.

Not surprisingly, the GT350 proved to the quickest Mustang we've tested on the Gainesville road course, capturing a lap in just 1.02.35 seconds (and also 1.02.75 and 1.02.72). And that's only second to a new Z06 Corvette with the carbon brake upgrade, which weighs hundreds of pounds less and sells for over $90,000. Of course, this is no budget machine either, as our tester would sell for close to $80,000.

Expensive? You bet, but as the folks at Shelby say, it's exclusive. Just 170 models will be built in 2011, and production will be limited to 350 in 2012. The Shelby GT350 is a Mustang you buy because you love performance and the Shelby heritage. It has supercar performance and certainly the potential to be a classic. The '65 GT350 sold for more than double the price of a base Mustang, and the modern rendition is no different. A proper original can also be worth a fortune, and there is an argument that this one will be too--only time will tell.

For additional photos and our amazing on-track video review, be sure to click on to musclemustangsfastfords.com.

The Shelby GT350 is a Mustang you buy because you love performance and the Shelby heritage.