Putting The Steeda Sport Edition GT Through its Paces On The Strip, Road, And Open Track. 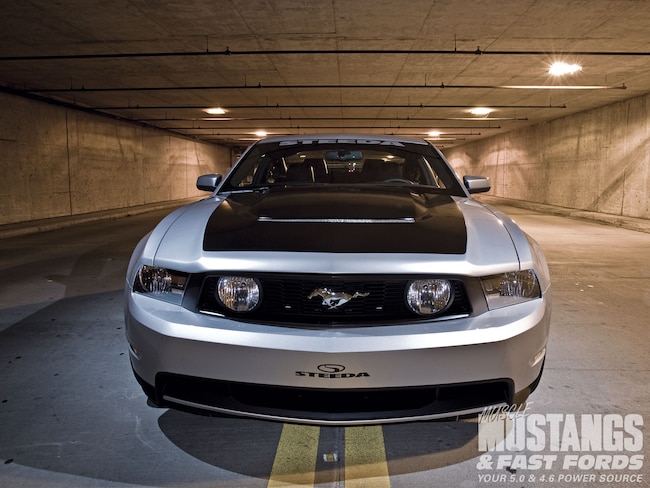 When your toughest decision is whether to hit the dragstrip or the road course, you know it's going to be an amazing day.

Such was the case on this brisk, sunny December morning as we entered the gate at Gainesville Raceway with a 2011 Steeda Sport Edition Mustang. The Sport Edition model is the latest from Steeda, prepped with slathering of suspension, style and power-making goodies.

"When we set out to build the 2011 Sport Edition, we decided to make it obtainable by the majority of the enthusiasts who could afford a new GT," says Dario Orlando of Steeda. "Our goal was to develop a package that was affordable in this economical climate, but yet still give owners a feeling that they can have a car that would not let them down in the performance department, at the track, and one that would have a look to back up the performance. What drives us to make the parts is the same passion that drives a lot of enthusiasts-either the challenge to go faster, or the ability to make their vehicle more unique then the other," he added.

With just two simple mods, including a cold-air intake and flash-tune, Steeda's GT put down an impressive 412 rwhp and 397 lb-ft of torque on our in-house Dynojet. On the street (and the track for that matter), the 5.0 is ridiculous fun-all you want to do is crack it and hit gears. Its howl is crazy throaty, louder than when you flipped the air cleaner lid on you dad's Holley. In fact it howls like, well, a Coyote!

Normally, there is a balance of intake and exhaust, but this GT makes most of its music with the induction thanks to the fresh-air inlet, open-element filter and Ford's Induction Sound Tube. In the name of keeping your wallet fat, Steeda eschewed the aftermarket exhaust. The exit pipes are stone-stock, but we were ok with that considering how good the intake sounded. Naturally, some will urn for an equally aggressive exhaust note, and as you know, that would be easily accomplished with headers, X-style midpipe, performance mufflers, or any combination of these parts.

Equipped with the optional 3.73 gears, our tester exhibited amazing tip-in response, but the real fun came when we planted the throttle to the mat. Nail it hard and the 5.0 awakens with a roar. The revs hit like a scalded cat and the tail scoots, wagging the tail on aggressive upshifts, which, by the way, is great fun. With that roar, the tach needle screams effortlessly past 7,000 rpm and the torque presses you firmly into the seat.

Thankfully, the not-too-intrusive traction control kept us in check-and the close ratios in the manual six-speed kept the revs in the right place for power. Of course, the Tri-Ax shifter made finding each gear a snap.

Since we had a full track day scheduled, we resisted pushing the Steeda too far on the street, be it in a straight line or our local on-ramps. That didn't quell our fun, however, as each boy and girl who wheeled the Steeda was impressed and wanted more. And everyone wanted a shot at the title on track. I think someone was quoted as saying "If anyone looks at me, I'm starting a race!"

"The average owner can expect a Mustang that will lay down 405-410 rwhp and with a set of drag radials turn low-12 or high-11 quarter-mile times," says Orlando. "If corner carving is your vice, then with a set of NT01s you can expect a car that will run comfortably at any track and not be left in the dust. Not to mention, it will decimate a Camaro on strip or road course. Probably the best part of what owners can expect, is they get all of what I mentioned above plus a car that makes a fun daily driver that will not break the bank." 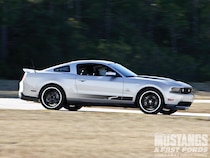 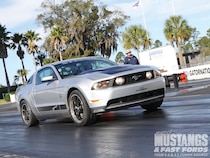 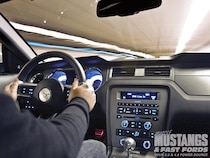 At the start of this adventure I mentioned we had a choice to make. Since Steeda was itching for us to best its 11.97 e.t. with drag radials and the front antiroll bar disconnected, we took advantage of the cool morning air and headed for the strip.

Wasting no time, Associate Editor Marc Christ installed our new Mickey Thompson 275/40-17 drag radial tires. We left the front antiroll bar in place, wanting to see what the car could do without much fuss.

To say we were having fun would be a gross understatement. The Steeda Sport Edition was producing all the right sounds, smells, and performance that anyone could ask for. The boys at Steeda did a great job with the tune, and we enjoyed the few extra revs, since the limiter was turned up just north of 7,500 rpm. This allowed us to shift higher than normal, but not much more. We did try going as high as 7,600, but the engine didn't pull up there, so we backed it down to 7,300 and were rewarded with our best lap of the day-11.92 at 115.97 mph. If we didn't have to move on, we're certain an 11.80 was a just a pass or two away.

Satisfied that the GT was a solid 11-second player, it was off to the road course. The Gainesville course is tight and a real brake killer, but it's ok for basic vehicle evaluation. Unfortunately, the cold weather did nothing for traction. Nevertheless, we slipped in a lap quicker than our best in the stock 2011 GT (1.07.15 and 1.07.18 versus 1.07.83). Problem was, we couldn't build any heat into the tires, and the tail got really happy with the smallest application of throttle on corner exit. Our problems were compounded by the stock brakes, which faded after only a few laps. With warmer weather, there is no doubt we'd have seen laps in the 1.06 range.

Nevertheless, Steeda's suspension, which consists of chromoly strut-tower brace, competiton rear antiroll bar, adjustable front antiroll bar, lowering springs, and adjustable Panhard rod, gave the GT a nimble and accurate feel. It is hunkered down and there was noticeably less roll than with a stocker. We were riding on Steeda 20-inch Spyder wheels with Nitto NT05 tires, and have had great success with that combo on other cars.

No Steeda would be complete without some aesthetic enhancement. The Sport Edition wears a lightweight hood, the aforementioned wheel and tire combo, and a slick graphics package. It also had a billet power plug door and Steeda floormats.

Suffice it to say, we were impressed with this amazing package-heck, we drove the GT for six weeks before reluctantly giving it back! Steeda tweaked the right nerves to enhance performance and let everyone know the GT was packing more than stock. We love any Stang that can whip the snot out of a new Camaro or Challenger at the strip, and then eat Corvettes on a road course.

And with that we have not much else to say-except, Mr. Orlando, can we have it back for another six weeks?