Technology And Efficiency Lead To Ultimate Performance In Ford's Newest Rendition Of The Shelby GT500. 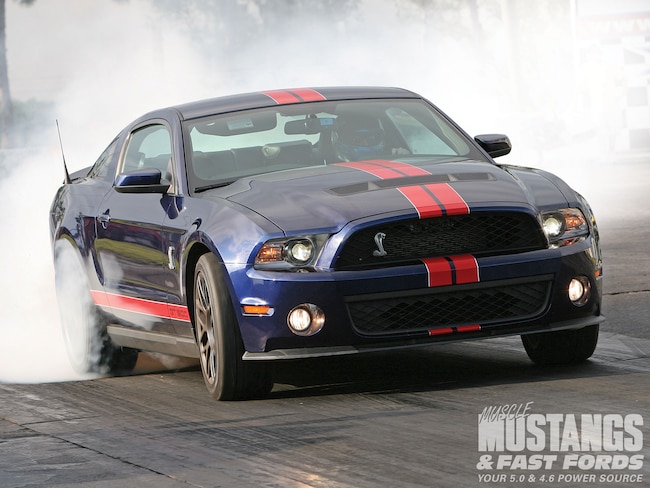 Whether you realize it or not, we are living through the second muscle car era. The "Big Three" are still fighting for dominance on the street and track, and the horsepower junkies are reaping the rewards. Though the phrase "win on Sunday, sell on Monday" might no longer be uttered in the Ford Motor Company board meetings, you better believe the horsepower wars are flourishing. To fight the war, the engineers at Ford's Special Vehicle Team (SVT) have armed us with the latest weapon, namely the 550hp '11 Shelby GT500. With performance and efficiency far superior to anything the '60s or '70s had to offer, the new GT500 is truly a 21st century muscle car.

In recent years, this top dog in the Ford muscle-car lineup has been a stout, supercharged Mustang that bears the name of a man who elevated Ford performance to new heights in the '60s-Carroll Shelby. With roots deeply planted in the original muscle car era, the latest GT500 packs a factory rating of 550 hp and 510 lb-ft, which matches the Ford GT supercar. Combine this with improved handling and other enhancements, and you have an amazing overall performer in almost any category-all for an MSRP of $48,645.

There is something romantic about a powerful car, and as soon as you slide into the seat of the GT500, the romance begins. From the feel of the Alcantara-wrapped steering wheel to the subtle glow of the ambient lighting, the aggressive exhaust note, and the new-car smell, every one of the senses is engaged.

An improved powerplant derived from the Ford GT supercar adds a few extra ponies but loses many unwanted pounds. With the help of aerodynamic refinements and engine improvements, the '11 Shelby is the most fuel-efficient GT500 ever built-it was even able to shed the gas-guzzler tax. An all-new EPAS (electric power-assist steering) systems helps drivers feel more connected to the road and/or to the track. Revamped stripes and new optional rolling stock complement the ultra-aggressive front fascia and body lines, making the bold even bolder.

"The 2011 GT500 program is all about the handling, the driving dynamics, and the new aluminum engine," explains Jamal Hameedi, chief nameplate engineer for the GT500. "It's an exciting time for us, because SVT is really fulfilling its role as a technology leader within Ford."

MM&FF had the opportunity to first test the '11 Shelby GT500 at Virginia International Raceway (VIR) during Ford's press launch. In addition to time spent on the 3.27-mile full circuit, we put over 1,000 street miles on the clock.

"After a few laps in the '11 GT500, I came to the realization that this is a racecar, mellowed out for the street, well, at least it has racecar-like characteristics," said MM&FF's editor Evan Smith. "Ford offered us the opportunity to run on the full VIR circuit, and that allowed us push the GT500 really hard. We drove both the '10 and '11 models, and the difference is quite noticeable.

"The combination of the improved handling package (with reduced nose weight) and the EPAS put the new GT500 ahead in feel and in lap times. The car is more precise on turn-in and there is more grip at all levels. This equates to faster laps. Additionally, there was better balance, which the Mustang always struggled with because they almost always understeer. Now, the GT500 is neutral, which is quite nice. Even acceleration is better, thanks to the extra power, the 3.73s, and the lighter weight," Smith added. 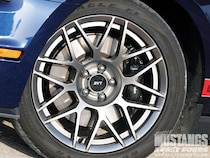 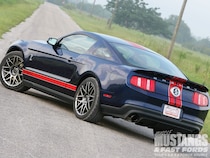 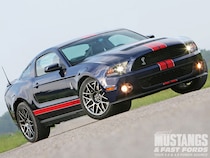 Our Kona Blue test vehicle was loaded with the optional SVT Performance Pack and the electronics package, which adds navigation, and was priced at an MSRP of $55,537. The Performance Pack includes newly designed Goodyear Eagle F1 Supercar G:2 rubber, which SVT engineers worked hand-in-hand with Goodyear to develop specifically for the GT500. The Performance Pack also adds optional 19-inch front wheels and 20s in the rear. Tires check in at 265/40R19s and 285/35R20s respectively. The newly designed Eagles add to the GT500's sure-footedness on the street, road course, and dragstrip.

In addition to the improved rolling stock, the Performance Pack adds thinner stripes and the aforementioned 3.73 gear ratio for better acceleration.

Powerful Technology
The heart and soul of the '11 GT500 is a redesigned all-aluminum, 5.4L modular powerplant. Derived from the aluminum bullet found in the Ford GT supercar, the GT500's new mod mill plays host to a slew of technological advancements. Ford-patented Plasma Transferred Wire Arc (PTWA) cylinder-liners replace the cast-iron sleeves used in other aluminum blocks.

The PTWA coating is a 150-micron-thick layer, which is applied using electricity to create a 35,000-degree plasma jet. Steel wire is melted by the plasma jet and fed into a rotating spray gun; then blown onto the cylinder walls, which have been specially machined to accept the coating. As the coating is applied, the melted steel wire oxidizes and creates a composite coating of iron and iron oxide. This coating reduces friction between the cylinder walls and piston rings, and saves 8.5 pounds over traditional cast-iron sleeves.

The aluminum block, coupled with the weight savings from the PTWA liners, offers a weight reduction of 102 pounds over the '10's cast-iron equivalent. Shedding over 100 pounds from the nose contributes to the rest of the improvements made to the '11 GT500. Fuel economy, acceleration, handling, and steering precision are all affected by the improved power-to-weight ratio.

"Cutting weight to improve performance is a tradition among hot rodders," adds Carroll Shelby, founder of Shelby American. "It might not be as sexy as adding horsepower or bigger brakes, but shaving pounds is the single smartest move you can make."

Carving Corners
The SVT engineers paid close attention to improving the handling of the '11 GT500. One of the most significant improvements came in the form of Electric Power Assist Steering. The EPAS system makes driving the GT500 an absolute pleasure. The near-effortless steering while stopped and/or at low speeds makes tight maneuvering a breeze, while the increased weight (or feel) from the steering system at speed gives you an amazing feeling of precision and control. The EPAS, combined with the sticky Eagle F1 Supercar G:2 tires, allows you to navigate through serious twisties with the utmost confidence.

Additional changes to the GT500's suspension included lowering the ride height 11mm in the front and 8mm in the rear to improve its corner-carving ability and add a sportier feel on the street.

The extreme performance and abundant power are apparent when you let out the clutch. There is more than enough power for any situation on the street. The ride quality is firm, yet comfortable, and the growl of the supercharged mod motor is subtle but healthy under throttle application. The feeling of being planted in the seat combined with the tone of the exhaust creates an assault on senses.

Acceleration is quick and smooth, but the amazing part about the GT500 is its refinement and comfort level. There is nothing terrifying about using all 550 hp. The power gets to the ground rather efficiently and isn't quick to annihilate the tires (of course with 550 hp, smokey burnouts are not hard to achieve).

The Straight and Narrow
To finish our evaluation, we headed to Bradenton Motorsports Park in Bradenton, Florida, for quarter-mile action. We arrived early to give the engine and supercharger ample time to cool before we rolled up to the line. This was necessary considering the 95-degree temperature, 70-plus-percent humidity, and crappy 28.9 barometer, which equated to a corrected altitude approaching 4,000 feet. (We tested the '10 GT500 in near sea level conditions, which would equal about a three tenths difference in quarter-mile e.t.'s.)

After a mild Second-gear burnout, Editor Evan Smith inched the GT500 to the starting line, staging ever so shallow. When the light turned green, Smith traded pedals, and the Goodyears tried to hang on for dear life. Unfortunately, the 510 lb-ft of torque was too much for the Eagle F1s to handle, resulting in a first pass of 14.03 at 111 mph.

We knew launching the GT500 on street tires would prove to be difficult, but the potential was there for some low numbers. Smith was also the first driver down the track and despite the poor performance, we knew we couldn't do much worse.

From here it became a matter of getting the engine cool in the pathetic conditions and finding the limit of what the tires could handle. After numerous attempts and lots of wheel spin (mostly during gear changes), Smith got a grip on the starting line and power-shifted his way into the 12s with a 12.60-second pass at 116 mph.

As the night went on, the mid-90-degree Florida air began to settle into the 80s, and the e.t.'s kept dropping. Smith wheeled his way to a 12.51, then a 12.25, followed by a 12.05 at a very healthy 118 mph. Back in the pits, we used ice and fans to remove heat from the 5.4L, and each time we cooled it to below normal operating temperature, Smith headed to the line for another pass.

After a smokey show to clean off the Goodyear Eagle F1s, he launched hard and was quickly away from the starting line. The MM&FF staff watched from the starting point as Smith grabbed Second and Third with a bark from the rear hides vocalizing at each gear change. The run was smooth and straight, and as Smith shifted into Fourth, we knew this would be one of the quickest passes of the night. The scoreboard lit up with 12.02 at almost 119 mph! We were excited to be so close to breaking the 12-second barrier on the stock tires, but unfortunately, the next runs did not yield better times.

Ultimately, we came away with a 12.0, not an 11, but we can say with confidence that the '11 GT500 is quicker than the outgoing machine. It's 120 pounds lighter, has 3.73s and stickier tires, and under equal conditions, would be two-to-three tenths quicker in quarter-mile acceleration.

With enhanced efficiency, technology, safety, handling, and near-11-second quarter-mile performance off the showroom floor, the '11 Shelby is an amazing piece of automotive machinery. With power and comfort levels this high, it's hard to imagine Ford Motor Company being able to improve on the '11 GT500-but it does so almost every year. We can't wait to see what 2012 brings!

Be sure to check out www.musclemustangfastfords.com for exclusive on-track and dyno videos from our tests.