We Hope Chevy And Dodge Owners Like The Back Of The 2011 Mustang GT-Because That's All They'll See! 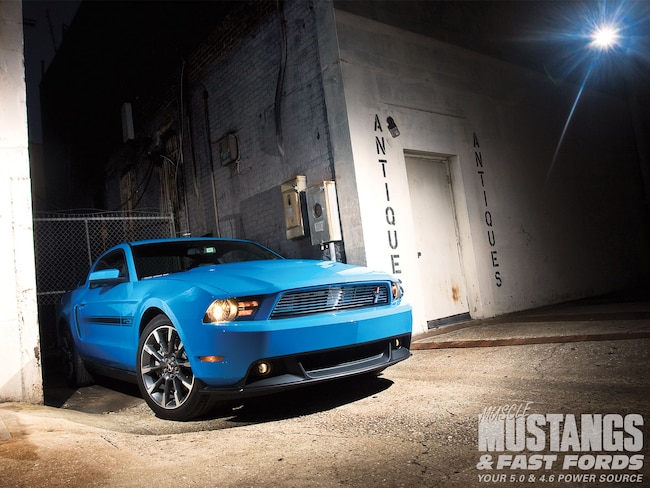 The 2011 Mustang could be one of the most important Stangs ever built. Given the state of our economy and today's stiff competition, Ford must sell loads of its new Mustang-and it must do so now. In our opinion, this won't be a problem because the new Mustang packs a wicked punch. You'll be hard-pressed to find a better performer for around $30,500-$35,000. Also know that your econo-box won't run low-12s stock, and neither will a new Camaro or Challenger-but oh, by the way, the Mustang GT will!

The 412hp, ultra-modern 5.0L mill, featuring Ti-VCT (Twin Independent Variable Camshaft Timing) is a true wonder that you can read all about (if you haven't already) in the April '10 issue of MM&FF, "Return Of The 5-Liter Mustang." With more power than ever before, Mustang owners will have no trouble smoking the tires-or the competition.

But the extra power is only a small part of the good news, as the '11 Mustangs feature nearly 40 elements of enhancement (see sidebar), giving potential V-6 and V-8 buyers a multitude of reasons to purchase a new Mustang.

Slip Inside
I was virtually boiling over with anticipation prior to driving the new 5.0 at a recent press launch in Los Angeles. But first, Ford offered seat time in the potent Performance Package V-6.

We slithered up California's Pacific Coast Highway through Malibu and dismantled an autocross, going head-to-head with a V-6 Camaro. It was no contest. The Mustang covered the Chevy in every aspect, including handling, braking, visibility and overall feel.

I really liked the steering weight (read: effort) designed into the new EPAS (electric power assist steering) and the overall nimble feel of the Mustang. In slow-speed corners, steering effort is reduced, but at speed, more effort is required. By comparison, the Camaro felt heavy, plowing the nose and lacking the acceleration of the Ford. I guess an extra 250 pounds will do that.

Walking up early the following day was easy-we'd be driving the 5.0 GT through canyon roads and burning tires on a make-shift dragstrip set up at an airfield. (Read on for the real drag test that came the following week.)

At first glance, only the "5.0" fender badge gives away the '11 GT (save for the California Special model, which sadly, has no external "5.0" badging), but twist the key and there's no mistaking this for a V-6. Ford's new One-Touch Start allows drivers to simply turn the key (then you can let it go), and the computer takes over to crank and start the engine. When it fires, a throaty sound crackles from the enlarged pipes, its note slightly deeper than the outgoing 315hp 4.6.

Strapped in and with the engine running, I depressed the light-feeling clutch, engaged First gear in the six-speed manual, revved the mill a few times, and got moving. The excellent, almost light clutch actuation and smoothness of the transmission, which features a deep 3.66:1 First gear ratio, is noteworthy. It's not a double-overdrive as you might expect, as Fifth is 1:1 and Sixth is overdriven to 0.65:1. A 3.31 rear gear is standard with the manual (3.55 and 3.73 are optional); final drive with the 6R80 automatic is 3.15:1.

With miles of open road ahead, I breathed into the 5.0, and felt the additional 97 hp and 65 lb-ft of torque (over the 4.6). The enhanced power is right there at tip-in during low-speed driving as the torque comes on in a smooth but amazing fashion.

The big difference, however, came once I put the throttle to the mat. About midway through the rev range (4,000 rpm), the 5.0 is a pure animal, coming alive and pulling with a snarling grunt straight to redline. At 7,000, I hurled the shifter into Second gear with the throttle "full on," and the Pirelli 245/45/19s Nero Zeros barked-hard-which kicked the tail out slightly. I proceeded to keep my right foot flat; at redline I nailed Third and then Forth. The 5.0 never stopped its march, and our speed rapidly approached the triple-digit mark. Impressive? Me thinks so.

Ford engineers tell us there's no torque reduction (read: engineered throttle closing on upshifts to prevent driveline damage) in the low gears, and we believe them-there was little-to-no lag in acceleration or throttle response. That's one noticeable improvement over the Three-Valve GT.

If you amass great speed, fret not. The 13.2-inch front discs with twin-piston calipers will slow you down. For those needing (or wanting) better binders, Brembo 14-inch vented rotors and four-piston calipers can be added for about $1,695 MSRP.

On that note, it's a good time to mention Ford's new My Key option, which lets car owners limit the top speed of the vehicle, as well as radio volume, and includes a traction-control system that can't be deactivated, and a persistent seatbelt chime, all to provide a safer experience for youths.

Yet another colossal improvement is the aforementioned EPAS, which takes the Mustang driving experience to a higher level of handling, performance, and feel, with quicker on-center response, increased effort at highway speed, and reduced effort required for low-speed maneuvers. EPAS also affords the ability for tuning the steering feel electronically, and it can adjust for driving annoyances.

"Drift-Pull Compensation adjusts the steering to correct for crosswind and minor road crowning," said Dave Pericak, chief engineer on Mustang, "while Active Nimble Control helps eliminate the shimmy felt at high speed, where a wheel is out of balance or when a brake rotor is warped." It also reduces weight and adds performance since the engine is not driving a power-steering pump. We noticed better overall feel and reduced NVH through the wheel compared to earlier S197 Mustangs.

On Track
While we burned up the autocross with the Performance Package V-6, dragstrip duties were left to the 5.0-liter-in our case, a Grabber Blue GT/CS (California Special) with a six-speed manual. On a mild Florida day (1,500 feet corrected altitude), we sat ready to go on the starting line at Gainesville Raceway, tires cleaned, staged, revs up, and ready for the tree to drop. And when it did we traded feet and put the 412 hp to the test.

On launch, the nose came up, the tires made that eeeekkkkkk sound, and away we went with a 2.06 60-foot time. It didn't take long for the revs to reach 6,900, which is when I promptly nailed Second gear. I was in Second even quicker than First, and kept my focus on the tach needle whipping up quickly on each gear change. Ultimately, the gearbox was in Forth and the Grabber Blue machine was streaking for the stripe. Our first pass was clocked in 12.692 seconds at 112.61 mph!

We were floored-no stock Mustang GT has ever come close to these numbers. Did the Pony have more in it? We soon found out.

Needless to say, we were quite pleased. Even the guys from the GM magazine on hand were impressed beyond belief. With the previous 112-mph trap speed, we knew low 12s were in the cards, but to do it and see it on the board proves the worth of this Mustang. Best of all, the 2011 GT is easy to drive as the power is linear and predictable, the revs come up, and you shift, then repeat. There is no tricky IRS to worry about or any special launch technique to master. Just get in, rev it up, and trade feet smoothly and quickly.

Our only regret is not spending more time on the stock tires, as we feel it was capable of 12.50s with more practice. Nevertheless, who could complain? We loved virtually every aspect of this machine, although we would have liked a slightly louder exhaust.

We even made a few laps around Gainesville's road course; the GT/CS clocked a best time of 1.07.83. The short, tight course did a number on the stock brakes, as we experienced fade after four laps. If taking corners is your fancy, we recommend the Brembo option, which would have improved our lap times.

The Mustang is no longer a gritty performer that gives up on ride quality, creature comfort, technology or performance. This Mustang provides a world-class automotive experience that no Mustang lover should live without-ever!

For more photos and video action from the track, check out musclemustangfastfords.com.