The 2010 Roush Stage 3: Roush Performance Pulls Another Trick Out Of Jack's Hat. 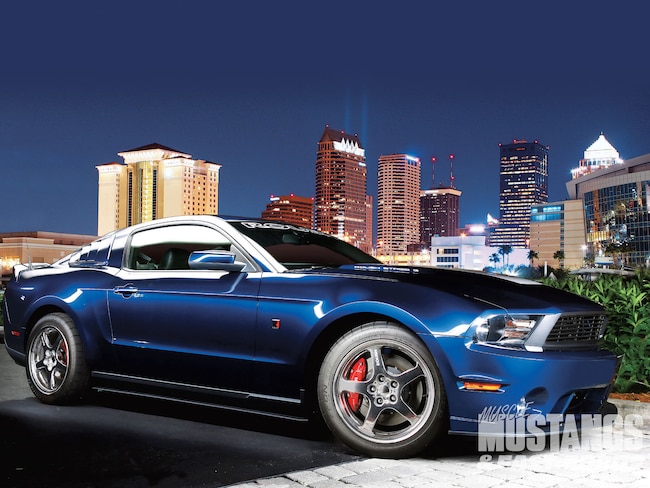 As MM&FF Editor Evan Smith heated the hides at Gainesville Raceway behind the wheel of the 2010 Roush Stage 3 Mustang, we were hoping for, and expecting, a high-11-second quarter-mile pass. Our Stage 3 tester was packing 540 hp-an animal on the dyno and on the street.

Still in bone-stock trim, Smith edged up to the starting line, staged ever so shallow, revved the engine, and waited for the Tree to come down. With the blown mod mill poised at 3,000 rpm, the lights dropped and Smith traded feet. The 540hp Three-Valve let out a grunt, the Cooper RS3s shrieked slightly, and the Roush was gone in a Kona Blue flash. A mean growl emitted from the tuned exhaust, echoing off the control tower, and there was nary a flash in rpm on each powershift. Finally, the Stage 3 was in high gear and screaming when it crossed the stripe. The outcome: 11.57 at 124.78 mph!

Though the '10 Roush Stage 3 performed one of the most impressive quarter-mile e.t.'s for a showroom-stock Mustang, there's much more to the story.

After spending a few weeks with the '10 Stage 3, we can say it's the best Roush Mustang ever assembled. It's racy, attractive, and unmistakable; the interior quality and comfort level rivals luxury sedans; and its balance of driveability and raw power is incredible.

To create a package with 540 hp, Roush used an engine like the one featured in the '09 Roush P-51B. It begins with an aluminum Three-Valve block that houses a forged steel crankshaft, forged H-beam rods, and forged pistons with a sizeable dish to take the compression ratio from 9.8:1 to 8.6:1. This fortified and boost-friendly short-block is fitted with stock heads, and topped with a Roush intake manifold and a R2300 Roushcharger. The 2.3L TVS features a textured black finish and an eight-rib pulley, which is driven by its own separate belt and pulley system. It also features an air-to-water intercooler with a separate reservoir.

The team then added unique fuel rails and 52-lb/hr injectors, and the fuel pump was upgraded to a high-flow unit. The stock TR-3650 remains, but the clutch has been swapped for a heavy-duty disc and a lightweight aluminum flywheel. There's also a Roush shifter, which looks great but isn't the smoothest shifting unit we've ever laid our mitts on.

"The Roush Stage 3 Mustang has traditionally been among the halo vehicles of our lineup, and I'm really proud that it sits atop the pecking order once again," said Jack Roush. "This new iteration of the Stage 3 represents our highest horsepower and most sophisticated Roush Mustang yet, and is sure to resonate among our fans."

Our initial driving impression was one of great excitement. With more power on hand than any previous Roush, smoking the tires just depends on how far you press the loud pedal. Under light acceleration, though, it's easy to forget you're driving a 500-plus-horsepower Mustang. The rumble from the exhaust and whine from the supercharger aren't annoying, but loud enough to let everyone know you're not in a stocker. There's a bit of chatter from the clutch on slow takeoffs, but not enough to be irritating under most driving conditions.

The interior, like the exterior, is loaded with Roush-specific components. Sport leather seats with embroidered "Jack Roush" signature dominate the interior compartment. They give the driver (and front passenger) extra head, lumbar, hip, and leg support without feeling too racy or stiff. Entrance and exit are easy, and the seating comfort is excellent, worthy of a long road trip.

Like the 427R, a boost gauge resides in the left A/C vent, yet allows the vent to maintain its function. The gauges are white and Roush-specific, and the shifter is the aforementioned Roush short-throw with a billet arm, and either a black or white spherical knob engraved with the Roush logo.

Our Kona Blue test subject was equipped with the standard 18-inch wheels and Cooper RS3 rubber, instead of the optional 20-inch wheels. The 18s are far better for performance, and we love the grippy Cooper tires: we knocked off a 1.849 60-foot time.

We picked up the Stage 3 at our local Ford dealership, Brandon Ford, and couldn't resist tearing up the streets of Tampa right away. Under normal and light acceleration, the Stage 3 was meek and docile. But crack the throttle and hold on, because the Stage 3 flat out gets it.

Acceleration was so good that we made it rather quickly to Ramsey's Performance in Lutz, Florida. Dennis Ramsey was kind enough to strap the Stage 3 to his Dynojet, and the first few runs with a hot engine yielded horsepower values in the 490s and torque in the 420s. After a cooldown, the numbers peaked at 508 rwhp at 6,100 rpm and 468 lb-ft at 5,000 rpm.

Back To The Track
As you know from the lead, we spent a day at Gainesville Raceway, both on the strip and the road course. With Editor Smith behind the wheel, it knocked off 1:06 lap times consistently, which is pretty good.

"The Stage 3 has a great balance of power, handling and braking," said Smith. "Bodyroll is kept to a minimum, but it doesn't sacrifice ride quality at all. It's really compliant with plenty of grip. Best of all, this car is fine for daily driving or the long haul. Turn-in is very accurate, and steering feel is nice and tight. The big brakes do a nice job, but we did experience a light fade after a bunch of hard laps on the short, tight course."

With a starting price tag of almost $60,000, the Stage 3 is priced higher than a Shelby GT500, but with a full 36-month, 36,000-mile warranty and mid-11-second performance, it's a great choice for a buyer who wants to have all the styling of a Roush Mustang and power to run with the best cars on the road today.

Since Roush Performance is only building 103 units for the 2010 model year, it may just become a collectable in years to come. Though certainly not a sleeper, it far exceeds what it reveals in its appearance, yet maintains good manners on the street and offers unbelievably comfortable seating and ride quality on the highway.

Roush Performance pulled a rabbit out of its hat on this one, but unlike the hare in the fable, the tortoise doesn't stand a chance in this race.