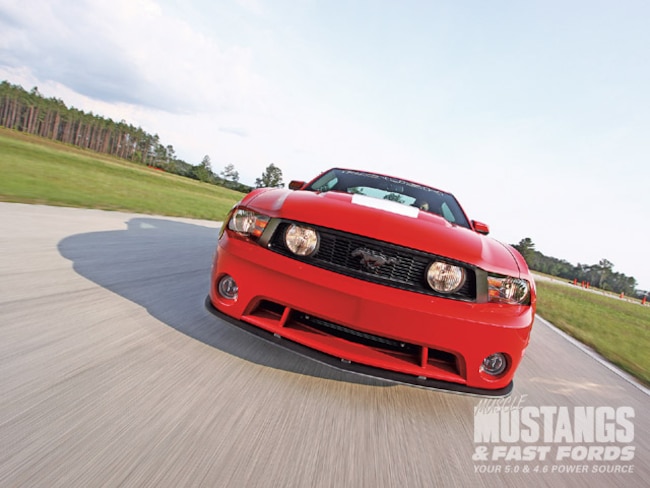 It was in the office parking lot, vibrantly red and gleaming. Even through our tinted-glass reception area, it sat roasting like an atomic fireball in the guest parking spot. It, of course, is the 2010 Roush 427R Mustang that we recently drove, and in the next few pages, we'll show you just what the minds at Roush Performance Products have done with the latest incarnation of Ford's ponycar.

Since it's inception, the 427R model has been striking in appearance, and the '10, with its Torch Red Paint and bright white graphics, continues to stand out in a sea of mundane transportation devices. The graphics package received only minor updates, like changes to the font and subtle fading of the color on the rear trunk badge.

Body-wise, Roush reworked the front and rear fascias, the side rocker panels, and added the company's own rear spoiler and quarter-window louvers. While Roush styling has always been understated and elegant, the '10 427R is aggressive in appearance without being outwardly bold.

The front fascia incorporates Roush's lower foglamps along with a front splitter. That splitter design cue is carried around the sides of the car and along the rocker panels until it meets the rear fascia. There it blends into a blacked-out, diffuser-style rear bumper cover. The Roush three-piece rear spoiler offers the perfect accent at the back of the Mustang, and Roush's C-pillar window louvers are optional.

The Roushcharged 4.6L engine offers 435 hp and 400 lb-ft of torque. For 2010, Roush revised the air entry and rerouted it to the right side of the engine for a cleaner look, and to take advantage of the factory ram-air setup in the grille.

Our test vehicle was equipped with the optional 20x9.5-inch, chrome-plated, five-spoke, cast-aluminum wheels and Dunlop 275/35/20 rubber. Our source at Roush tells us the casting has been refined so that the 20-inch wheel is extremely close in weight to the 18-inch standard hoop. The company is also working closely with Cooper Tire to finalize a Roush-spec, 20-inch Cooper RS3 tire, which will replace the Dunlops later this year. Both wheels fit the optional big brake upgrade, which includes four-piston, aluminum front calipers with 14-inch rotors.

With the '10 Mustang GT, Ford engineers really overhauled the suspension, and the Roush staff made their own changes as well. The entire suspension system has been retuned for the 427R, and includes all-new shocks, struts, springs, and antiroll bars.

Lift the bulging factory Mustang hood and you'll find the Eaton M90-based Roushcharger, which is now manufactured in-house by Roush. The combination and tuning has largely been left unchanged, with the 4.6L engine turning out 435 hp at 6,450 rpm and 400 lb-ft of torque at 3,750 rpm. Roush engineers rerouted the air-induction system to the driver's side for a cleaner look than previous versions. It also allows the use of the factory ram-air setup in the front grille, though it doesn't offer any increased performance.

We think this is the way the standard Mustang should look-but if that was the case, it might take away from GT500 sales. The 427R is poised to do just that. Around Gainesville Raceway's road course, the 427R gave a comfortable ride, yet offered flat cornering when pushed hard.

Though the power ratings have not changed, Roush has taken some lengths to make sure that the engine is more efficient, and offers those numbers more often. The front heat exchanger is now a larger, single-core unit, mounted higher in the front fascia to protect it from road debris. The Roushcharger offers 5 lb/in of air pressure in the intake manifold, and we know of an aftermarket tuner that is already engineering higher-boost pulleys for the car. Keep in mind that if you change things up, the Roush 3-year/36,000-mile warranty is likely to fly out the window.

Though we didn't have much time behind the wheel of the 427R, we can tell you that the general ride seems very close to the base Mustang GT. It's in the turns that you'll probably notice the biggest difference, but we didn't have a chance to time the R on a closed course. We were, however, able to hit the local test-and-tune night at Gainesville Raceway in Gainesville, Florida, for a little drag-racing time.

Roush fitted the arguably ugly back end of the '10 Mustang with its own rear fascia and decklid spoiler. The fascia incorporates a diffuser, as well as side-trim detail that ties it in with the side rocker panels.

The NHRA-sanctioned quarter-mile offers Wednesday and Saturday test-and-tune events, and the track's executive general manager, Don Robertson, gave us first crack at the track when it opened. After we heated up the Dunlops for a few gratuitous burnout photos, we used the heat-soaked 427R to mostly hone our launch technique on the first two runs. We then let it cool down for about an hour, which isn't much given that the ambient air temperature was a tropical 85 degrees. Still, we pulled to the line, raised the revs to 3,500, and slipped the clutch while applying the throttle. With a few chirps emitting from the rear tires, we were off and logged a 2.05-second 60-foot time, which was followed by a 13.26 at 107.81. We then hot-lapped the car and ran a 13.45 at 106.43 (2.06 60-foot). Feeling that the 2.0-second 60-foot range was optimal for the tire and track conditions, we were pretty confidant that our 13.26 would hold up for the rest of the evening-and it did.

With a shorter, stickier tire and/or more rear gear-perhaps 4.10s-the times should drop quite a bit. Trap speed was very close to the 107/108 mph we clocked with the previous-generation 427R at Englishtown, where we ran a 12.32. That was with a shorter tire, a much better 60-foot time, and a much cooler air temperature.

Our test vehicle wore the optional 20x9-inch, chrome-plated alloys wrapped in 275/35/ZR20 Dunlop rubber. Our source at Roush tells us a 20-inch Cooper RS3 tire is in the works and should be available later this year.

Base price for the '10 427R comes in around $47,000; ours, which was loaded to the gills, checked in at $55,538. The '10 427R escapes the gas-guzzler tax, which should help with the bottom line, but Roush's latest offering features stiff competition from Shelby, not to mention the new Chevy Camaro and Dodge Challenger.

Roush plans to offer its Stage 1 and Stage 2 models for 2010, as well as the 427R. Those looking for the Stage 3 will have to wait awhile. Roush is still considering the model's content package and an arrival is yet to be determined.

Aside from budget considerations, we don't know why anyone would want any other Roush. The 427R is the complete package, with a bold aggressive look that is unmistakable.