MM&FF Gets Behind The Wheel Of The '10 Mustang Gt And Hangs The Tail Out.

As this article goes to print, our economy is in a deep recession--two of the Big Three automakers are looking for loans, the housing market is in the toilet, and jobs are being cut by the hour. Despite all the gloom and doom, the performance car market is chock full of excitement. New brand-x models are hittin' the street, and the Ford Mustang is getting a Hollywood makeover. While your 401K may be sliding, the '10 Mustang is climbing the performance charts.

To get a closer look at the hot Pony, Muscle Mustangs & Fast Fords logged a few hundred miles in the '10 Mustang GT. Ford was so excited about the improvements, that it rented the Streets of Willow road course in Rosamond, California, for us to see just what the latest Stang can do.

After flying into Los Angeles, we first slipped behind the wheel of the current '09 GT. Though the model commemorates the Mustang's 45th anniversary, it's overshadowed by the newly chiseled '10. After driving the '09 GT for about 20 miles, we had time to consider how much the S197 improved over the new-edge SN-95 design. The '05 Mustang was a home run, and for 2010, Ford sent the Mustang to the gym; it has come home with a more muscular and aggressive look.

We arrived at our destination a short while later--a pier on the coast in Malibu. There sat half a dozen '10 Mustang GTs, shined up and ready to be driven. After getting a technical briefing on the '10 Mustang's numerous changes and improvements, we grabbed the keys and were sent into the canyon roads on our way to the Ojai Valley.

Vast interior improvements have been made, and they make driving it a more enjoyable experience. Our pet peeves with the outgoing model include an uncomfortable steering wheel and a hard plastic center console that would dig into our legs and knees, depending on seating location. The fat and square steering wheel spokes, combined with their 90-degree attachment to the ring, made it uncomfortable to rest your fingers there, but the '10 Mustang has added 45-degree gussets that invite your thumbs to grip the wheel. The designers weren't happy about it from an aesthetics point, but they make holding onto the all-important wheel a vast improvement. Rounding the corners a bit and using a different plastic resolved the other issue we had with the center console. Rest your leg there all you want. We've heard of some people hitting the raised arm console lid on the '05-'09 models with their elbows during spirited driving, which may be why it was also modified and is now flush with the entire console. It's lockable and the cupholder door hides the keyhole.

The dual gauge pods have been redesigned and are much easier to read, as they no longer seem to be lost down a well. Lighting improvements to the My Color option now allow for even more personalization of the instrument panel. Our first '10 Mustang GT tester was equipped with the premium interior package that included real aluminum accents and the shifter ball seemingly right out of the '09 Bullitt. The stock shifter knob is fairly comfortable, but we preferred the upgraded aluminum knob for its muscular appearance and better grip.

We had plenty of time to assess the interior's refinements, but the improved road holding capability is what impressed us the most. The canyon roads offered all sorts of turns; ascending, descending, banked, and off camber. There was even a Laguna Seca-like corkscrew at one point. The '10 Mustang GT felt confident and capable. It corners flat and where you think it might break loose in a turn, it stays planted. Chalk it up to the Mustang engineers who spent a considerable amount of time tweaking the suspension. 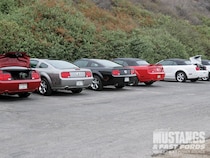 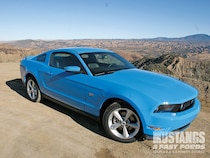 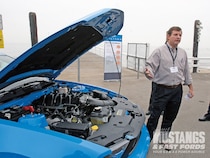 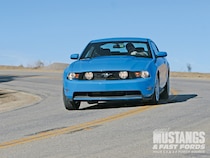 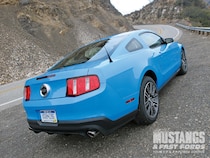 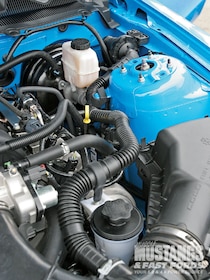 Using the '09 Bullitt and Mustang challenge race cars as reference points, the engineering team tightened up the rearend by making the rear springs 17 percent stiffer than the Bullitt springs (25 percent more than the '09 base GT). All new struts and shocks offer more control, which translates to a very flat-handling ride. Body roll seemed to be significantly reduced over the '09 model, and the optional 19-inch wheel package, with lower profile Pirelli tires, help stick the Mustang to the road, without providing a harsh ride. The base 18-inch Pirellis also offer a substantial improvement over the '09 model's BFGoodrich KDWS rubber.

We heard a few other journalists during our trip suggest that the steering was weighted well, but felt disconnected. We agree with the weighting and to some extent, the disconnected feeling. At low speeds and low lateral force, the steering was smooth and responsive. There isn't a lot of feedback, but in this mode of driving, we'd appreciate a bit of a buffer. When you push the car hard, you get the necessary feedback required to make precision adjustments, of which the steering makes with great accuracy. Turn-in is sharp, without being too aggressive, and that adds to the confidence-inspiring drive that one gets behind the wheel.

We didn't explore the limits of the Advance Trac stability control until we arrived at Willow Springs International Motorsports Park. Willow Springs is a road-racing Mecca located north of Los Angeles in Rosamond, California. Ford booked the smaller Streets of Willow circuit, but its 1.8-miles of twists and turns offered plenty of places to whip the Mustang around and attain speeds of 60-80 mph. It was also the safer of two courses for those who hadn't been on a road course before.

After lunch and a brief safety talk, we jumped in a base Mustang GT to get a general driving impression, and to explore the capability of the Advance Trac stability control. Advance Trac utilizes lateral and longitudinal accelerometers, along with steering angle, yaw, and individual wheel speed measurements to reel in the Mustang when certain parameters are exceeded. Being a performance car, the '10 Mustang also offers a Sport mode that allows a little more spirited driving style before it intervenes. You can also turn it completely off in case you want to do your favorite John Force, Steve McQueen, or Vaughn Gittin Jr. impersonation.

We were impressed with the new Pirelli all-season tires on the road, and they served well on the track too, however we didn't give the colt two corners before we put the hammer down. After a lap or two, we have to say that most people probably won't ever know the stability control is there unless they get into an emergency situation at speed or in inclement weather. From the factory it sticks very well and is very comfortable to drive. Once you do get out of shape, Advance Trac intervenes and adjusts to get you slowed down and straight again.

We then stopped in the pit lane to switch Advance Trac to Sport mode. For those who want to explore the limits of their Mustang, this is the setting, as you can slide the tail out ever so slightly without upsetting Advance Trac. We would say it is a great setting for novice or intermediate road racers who are looking to take up the corner-carving hobby. It'll let you get the car out of shape enough for you to know that it is, and beyond that, it's got your back.

Even with the Advance Trac completely off, the '10 Mustang GT is still very adept and you really have to push it quite hard to get it loose. Slight understeer is present, but the 4.6L powerplant offers plenty of power to steer with the throttle, especially when coupled with the optional 3.73 rear gear package.

While they are aiming for a late 2009 introduction, Mustang engineers brought out three '10 Mustang GTs equipped with the upcoming Track Pack. The Track Pack includes revised front and rear stabilizer bars, upper strut mounts, and rear, lower control arms from the '09 Shelby Mustang. Coil springs are the same as on the base GT, but the struts and shocks are cut from a clean sheet. Both the front and rear brake pads are upgraded, and the 3.73-cogged Traction-Lok differential is fitted with carbon fiber friction plates. As if that weren't enough, the engineering team managed to push through an even better tire package consisting of Pirelli P Zero summer performance tires, sized 255/40/19. While they hadn't quite finished with the Advance Trac tuning at the time of our test, the Track Pack-equipped cars will get unique stability tuning as well.

Our sources at Ford state the Track pack option will be affordable at $1,495. According to Ford, braking distances have decreased thanks to the pad upgrades and the better rubber selection. Manufacturer testing claims an increase from 0.90 to 0.93 on the skidpad with the Track Pack, and slalom speed improved by 2 mph. On the track, we couldn't give a very a good assessment of the Track Pack's road manners, given the smooth surface we were driving on, but the confidence-inspiring suspension mods should be very pleasing to the weekend road course or autocross enthusiast. With the Mustang's three-link/Panhard bar rear suspension being relatively new, the engineering team sure seems to have it dialed in.

All good things must come to an end, though, and so did our time at Willow Springs. So we grabbed a Sunset Gold Metallic GT for our trip back to the hotel. Equipped with the glass roof option, automatic transmission, and navigation/Sync options, it was a plush ride. Even the automatic shifter was upgraded for 2010. We'll take the Track Pack option and be much happier for much less money, though.

Was there anything we didn't like about the '10 Mustang? Not really. This author isn't completely sold on all of the styling changes, but that opinion will vary greatly from person to person. Concerning all of the other changes Ford has made, we'd say our favorite automaker has gone above and beyond what one might have expected.

For 2010, the Mustang GT has grown up and learned some manners, but it has done so without losing any of its adolescent, tire-smoking appeal. The new, aggressive styling seems to be a hit with most folks, and we can tell you that the driving experience behind the wheel is better than its predecessor. Ford has added a lot of value with things like LED sequential taillamps, EasyFuel cap-less fuel filler system, optional reverse camera, and dual-zone temperature controls. For those considering a V-6 Mustang, the engineers have been hard at work improving that model, too. Just when you thought the '05 Mustang was a home run, Team Mustang has hit a grand slam.