Is The 725hp Shelby Super Snake The Baddest Mustang Ever Built? Strap In And Find Out.

With great anticipation, the MM&FF staff awaited the arrival of the 725hp '08 Shelby Super Snake. And when the red-hot Shelby rolled from the enclosed carrier with a rumble, the hairs on our necks stood up. Carroll Shelby's latest creation brings with it a promise of amazing horsepower, bold styling, and even exclusivity.

Though not a factory Ford effort, the Super Snake carries the all-important Shelby name-and in today's world that seems to mean a lot, even with a price tag of $31,995 over a base GT500. Truth be told, the waiting list for Super Snake conversions is long, with over 700 orders in the books, and only 1,000 scheduled to be built per year. And despite the big press that the Super Snake has received, few magazines have gotten a taste of those 725 ponies.

Fitted with a Kenne Bell supercharger, Borla exhaust, and a Shelby 50-state tune, the Super Snake produces 725 hp and can run 10s at close to 135 mph.

"The Ford Shelby GT500 is fast, but hardcore enthusiasts asked us for a way to make their Shelby a more aggressive, balanced, performing track car," says Carroll Shelby, founder of Shelby Automobiles. "Thanks to our partnership with Ford Racing, our Super Snake package will make their Shelby GT500 one of the most balanced, fastest, fearsome muscle cars in the world."

With this in mind, MM&FF arranged to have Carroll's high-powered Pony dropped off right at our doorstep for a little dragstrip testing. The mission: Run 10s-plain and simple.

While the Super Snake packs 725 hp, it's a total package of performance upgrades. "We looked to improve every aspect of the car," states Gary Patterson of Shelby. "The car is lowered and has a more aggressive stance. We went to Baer and they did a nice Shelby-branded caliper that has forged, six-piston calipers, and the rotors are cross-drilled and vented. The rear gets 14-inch diameter rotors. The brakes are repeatable, especially on a road course. We also included brake ducting front and rear," Patterson adds.

"You can drive a GT500 with the Super Snake package everyday. Then hit the dragstrip on Saturday night, bolt on some slicks, and run 10-second quarters," says Carroll Shelby. "Take off the slicks, drive it home and then to the road course the next day to pick on the Porsches. It's the ultimate American muscle car."

The big daddy 725hp monster also gets a 3 1/2-inch aluminum single driveshaft because, as Patterson states, "the factory unit turns into a pretzel with that much power."

"It was important that the cars are emissions legal for 50 states, for either upgrade," he adds. "The tune is also very safe and we're not running the ragged edge."

Owning a Super Snake means having the most power and the most speed-a ridiculous amount of said ponies, methinks. Our tester carried series number CSM 08SS0001C and was slathered with all of Shelby's bells and whistles.

You'll first notice the nasty hood with near full frontal nudity that feeds the open-element filter and big KB blower. Material is carbon fiber, which is also used on the splitter, rocker panels, and mirrors. The quarter-windows are blocked (non-functional scoops are optional), and you get brake-cooling ducts and sequential taillights that we like a lot. Shelby/Eibach adjustable coilover shocks and struts get the Super Snake down low and sitting right on the special Shelby 20-inch Alcoa wheels wrapped in Pirelli rubber.

What's most impressive is under the hood, though. Sitting atop the otherwise-stock GT500 long-block is a polished Kenne Bell blower (a TVS is also available) that turns the 5.4 Four-Valve into Godzilla. With 725 hp and massive torque from tip in to redline, it achieves supercar status. A Borla cat-back exhaust funnels the fumes and creates quite a roar once the throttle is cracked. It spits and cackles on start-up and will get everyone's attention. The Snake is also enhanced with a 3.73 rear gear, though the extra torque multiplication is not really necessary. 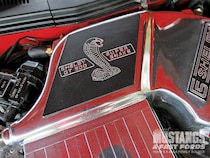 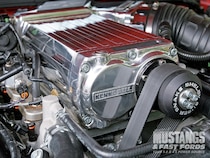 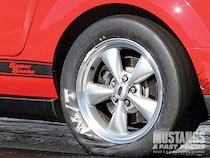 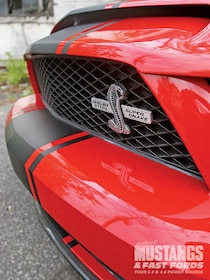 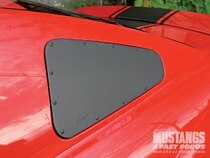 On the street, it's a wild animal. Its power is abundant at all throttle settings; even using the touch of a classically trained ballerina, we found it near-impossible to keep the tires under control. Planting the throttle, err... attempting to plant the throttle in First and Second resulted in deep-fried tires every time we tried. And you'd better be pointed straight when you mash the gas, or you'll be doing the loopty-loop. Still, our egos craved and coddled every last horsepower.

"The name 'Super Snake' is legendary because the one Shelby built was the pinnacle of muscle cars in 1967," adds Amy Boylan, president of Shelby Automobiles. "We're bringing that concept forward 40 years for customers who own a Ford Shelby GT500. We'll give their car amazing new capabilities."

Quarter-Mile KillerWhere the Super Snake really shined was at Old Bridge Township Raceway Park's quarter-mile. We attacked the famed strip with the bare minimum, just one mean machine and a set of Mickey Thompson ET Streets bolted to the back.

The track was prepped, but even so, our past experience with high-powered, two-ton cars using handling-type suspensions told us traction would be hard to find. And it was.

Our first attempt came with a 4,500-rpm clutch drop and a roast fest off the line. The Shelby tore through First gear, and when I powershifted Second, the tires kept spinning-hard. Knowing the run would be so-so, I eased it into Third and then Fourth. Despite this, we managed an opening hit of 11.007 at 134.51 mph.

Over the next couple of runs I adjusted my launch rpm and the tire pressure as well. The results were 11.02 and 11.03. Then we changed things up and I heated the Mickeys with a Third-gear burnout, staged shallow, and revved the big mill to 3,800 rpm. Showing some restraint, I eased the car out of the gate with a smoother technique. I planted the gas smoothly, rather than matting it, and I snapped the clutch "full-out" in the same instant. This worked well, as the Shelby dug in with minimal spin and with lots of g-force. A quick "lift-shift" into Second kept the Mickeys glued and all 4,120 pounds accelerating hard. At 6,100 rpm I powershifted into Third gear, and then Fourth moments later. Once in high gear, the performance was evident and the Super Snake ate up terra firma at a great rate. The improved launch and smooth Second gear exchange got us to the stripe in 10.870 seconds at 134.14 mph. We were in the 10s with 4,120 pounds of Shelby Mustang in full street trim, and with the engine gulping 93-octane pump gas.

"We wanted to under promise and over deliver," states Patterson. And we think the performance speaks for itself. Considering the handling suspension, the e.t. and mph was pretty amazing. Converted to a drag setup with softer springs and shocks, and some weight removed, would make this a mid-10-second car that could reach 140 mph in the quarter.

Check out JD Coon's 2008 Ford Shelby GT500! JD made it a point to modify his car for more power in order to satisfy his competitive thirst for more power.

In this tech inspection segment we look at installing aftermarket bolt-in hood lifts. Click here for more details or check out the January 2013 issue of 5.0 Mustang & Super Fords Magazine.

Now you can custom-tune your 'Stang with your phone or tablet with iTSX custom tuning. Click here for more details or check out the September 2012 issue of 5.0 Mustang & Super Fords Magazine.