Ford Unleashes The Shelby GT500KR "King Of The Road." It's Expensive And Limited, But It's The Quickest Mustang Ever Built.

Roll out the red carpet for the baddest Mustang ever. It's called "King of the Road," and it lives up to the moniker. Despite these challenging economic times, Ford hasn't been shy about offering up specialty Mustangs, and that's mighty fortunate for enthusiasts. This trend has been going on since the early-'90s, and you've been eating them up.

Ford fanatics can include the '93 Cobra, all three R-model Mustangs, the supercharged Lightning, the beloved Terminator, the Ford GT supercar, and more recently, the Shelby GT500 in their dream garage. Additional models consist of the '01 and '08 Bullitts and the Mach 1, too. But with the bar being raised so high, one can only wonder, what's next? 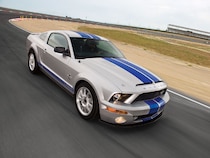 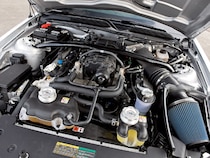 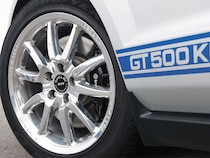 The alliance between Ford, Ford Racing, SVT, and Shelby is strong, and the GT500KR is shaping up to be the most spectacular example in the Mustang's 45-year history. One could say the KR epitomizes Mustang performance, combining what Ford knows about style, supercharging, and real-world, on-track performance.

Along with the thundering supercharged V-8, the KR is enhanced with a spectacular carbon-fiber hood and front splitter, and an aero-friendly rear spoiler, all in the name of improved balance. The KR sits low, has forged wheels, sticky Goodyear tires, and functional brake-cooling ducts, to name a few things. 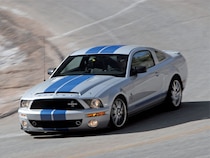 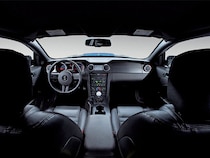 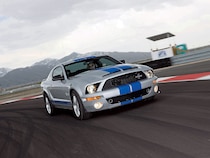 Drive One.
To find out how good the KR really is, MM&FF put a few examples through the ringer. Yes, we drove three or four different KRs on the streets, while tackling a road course and pounding the quarter-mile in this all-inclusive road and track test.

We traveled halfway across the country to Miller Motorsports Park in Tooele, Utah, where we exercised all 540 ponies and the 1.0g-capable suspension on the 2.2-mile West road course (there are multiple configurations at MMP). MMP is a world-class facility, which plays host to a Grand-Am series event as well as the Ford Racing High Performance Driving School. Before unleashing us in the KR, Ford executives allowed us to push hard in a standard GT500 (along with a few other Mustangs).

After getting settled, we cracked off the KR's ignition, and the 5.4 rumbled to life. At idle it cackles with authority, blip the pedal and it sounds oh-so good, like only a strong V-8 can deliver. Leaving pit lane, we whacked the throttle and were rewarded with an amazing song that never got old. The sweet symphony comes from a finely tuned H-style pipe, rather than the "X" that resides in the 500hp GT500. The KR also has less-restrictive baffles and 3.5-inch exhaust tips. The new exhaust also helps shed 20 pounds.

Other power enhancements include a cold-air package that utilizes the aforementioned carbon-fiber hood, with unique stainless steel twist-down hood pins. The hood serves multiple functions: aside from looking downright mean and being very light, the racy engine cover routes fresh air exclusively to the open-element filter while simultaneously channeling away underhood heat and pressure. It's a real performance piece. Furthermore, engineers have tweaked the timing curve and throttle mapping-and it shows when you plant the gas. 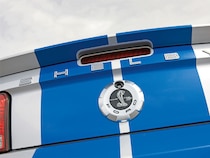 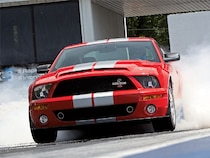 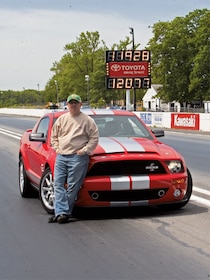 Like the standard GT500, the KR sports comfortable, yet supportive, leather-wrapped buckets and a "perfect" steering wheel that allows a nice grip during spirited jaunts. The clutch is just right, thanks to the twin-disc setup (also standard GT500), and the shifter is a short-throw unit with chrome handle and white ball fixed atop-it's reminiscent of a '60s musclecar. Plus, it's very accurate. Gliding the unit through the gates in the Tremec TR6060 six-speed was a breeze, even at WOT on the dragstrip. Former MM&FF Editor Jim Campisano says, "It's the best Mustang shifter ever."

The 3.73s are a great improvement over the 3.31s found in the GT500, as they get you going in a hurry-and with 510 lb-ft of torque, you keep on moving at a rapid rate. The KR is hunkered down 20 mm in the front and 15 mm in the rear, and recalibrated dampers combine to make a drastic improvement in handling. Also helping the traction-cause are four Goodyear F1 tires measuring P255/45ZR18 in the front and P285/40/ZR18 in the rear, with a special softer tread compound.

Race One.
On track, we noticed a big difference between the KR and the GT500, as the KR felt like a race car in street trim, albeit a civilized one. Braking was amazing thanks to the recalibrated ABS that is dialed in for more aggressive driving. Likewise, the traction control system was tuned to be less intrusive.

As for overall handling feel, we give it a solid "A." The steering is weighted nicely, and the KR turns in with great accuracy. Oversteer/understeer balance was neutral, and the back of the car followed directly with no wallowing in the rear, a common characteristic in most Mustangs. Where the GT500 (and most stock Mustangs) wanders or floats a little before taking a set, the KR plants firmly in one, smooth fashion. At highway or race speeds, the car is predictable and stays well-glued. This gives the driver great confidence and allows for "achieving maximum," as those F1 drivers like to say. Most amazing of all, Ford engineers accomplished this fine level of handling without sacrificing driveability, as the KR, while firmer than some other Mustangs, was smooth and compliant in everyday traffic.

While it's a capable corner carver, we wanted to know if the KR was a capable quarter-miler. Point blank-it is! In fact, it's the quickest and fastest factory Mustang we've ever tested.

Back at our home track (Raceway Park in Englishtown, New Jersey), we flogged a Colorado Red-with-silver-striped monster, and what fun it was. Our tester tipped the scale at 4,006 pounds with driver, and we clocked a series of low-12s. Refining our driving technique paid off in spades as the scoreboard displayed our best e.t. of 11.92 at 120 mph.

This marked the first time a bone-stock Ford Mustang dipped in the 11s, putting it in Viper and Z06 territory. No doubt the performance came from the combination of 540 ponies, special Goodyear tires, Earth-rotating torque, and 3.73 gears.

In fact, the KR was fairly easy to launch. On the 11.92, we revved the engine to 2,400 rpm, smoothly let out the clutch, and applied full power. Massive spin came only when we attempted to powershift Second gear, which led us to granny-shifting the one-two gear exchange on just about every run.

Not totally satisfied, we swapped the Goodyears for Mickey Thompson ET Street rubber. The street slicks were just what the doctor ordered, as we dropped from a 1.90 60-foot time to a 1.77, and in the process clicked off a best of 11.58 at 122 mph. Two more attempts resulted in an 11.63 and 11.59, both over 121 mph. Needless to say, we were impressed. Had we tossed on some skinnies, yanked the front antiroll bar, and removed a little weight, 11.30s would be possible. Just add boost, a tune, and headers, and you have a mid-10-second player. It sure is good to be the king.

The car that was really burning my noodle was the 2016 Ford Mustang EcoBoost, which instantly satisfied all of my qualifications. Check out this dragstrip test!