We light 'em up with Roush's 435hp, automatic-equipped Mustang. It's the real deal! 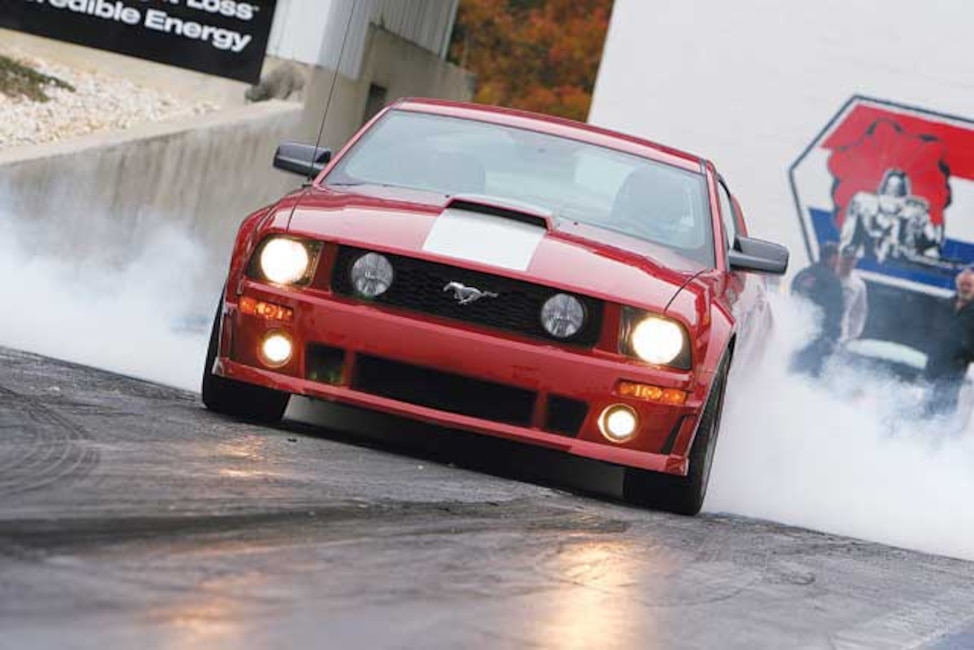 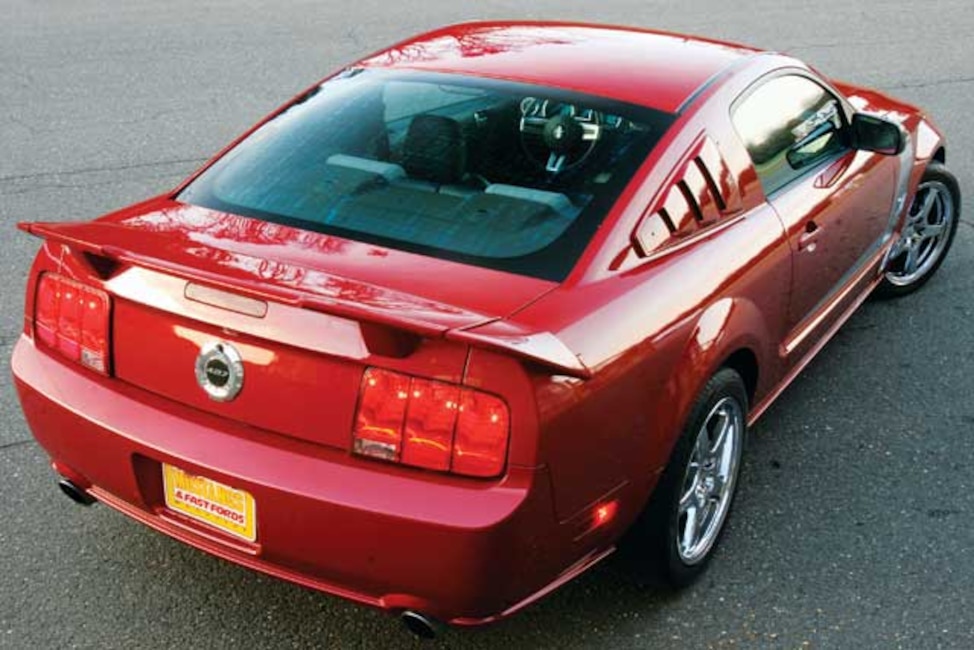 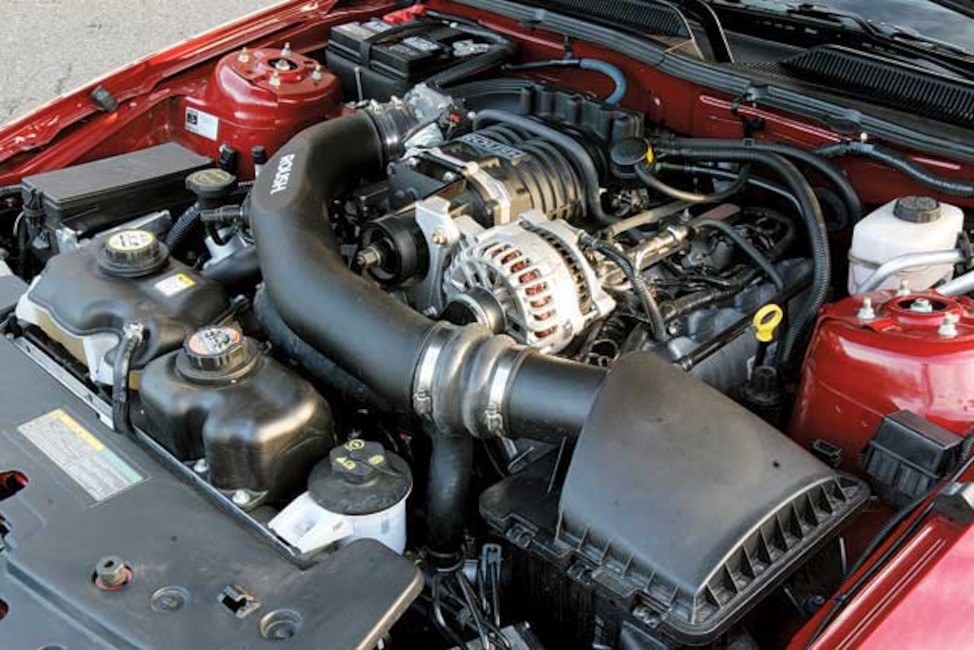 The Roushcharged Three-Valve sports an intercooled supercharger kit with a performance-tuned ECM. In addition to having 435 hp, the 4.6 makes 400 lb-ft of torque. 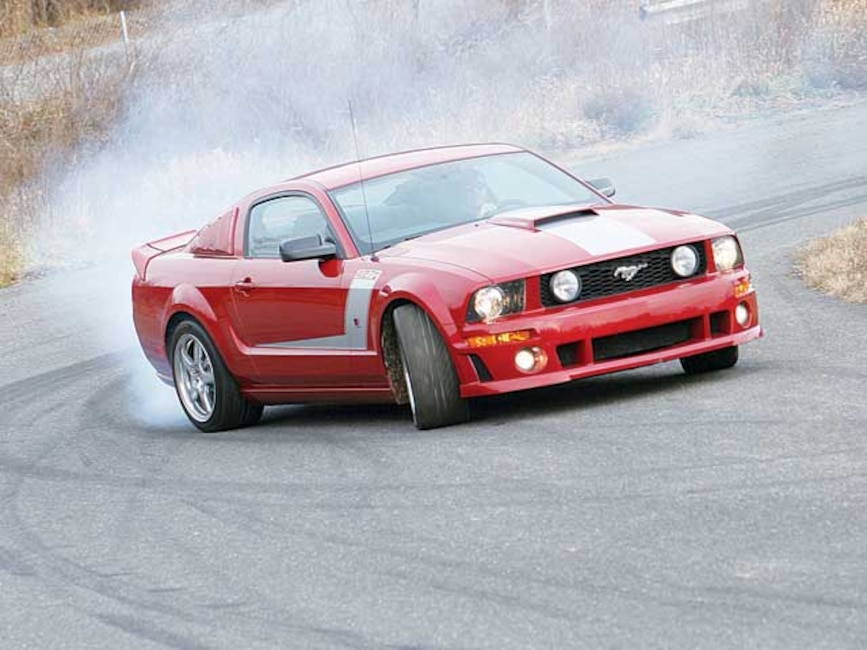 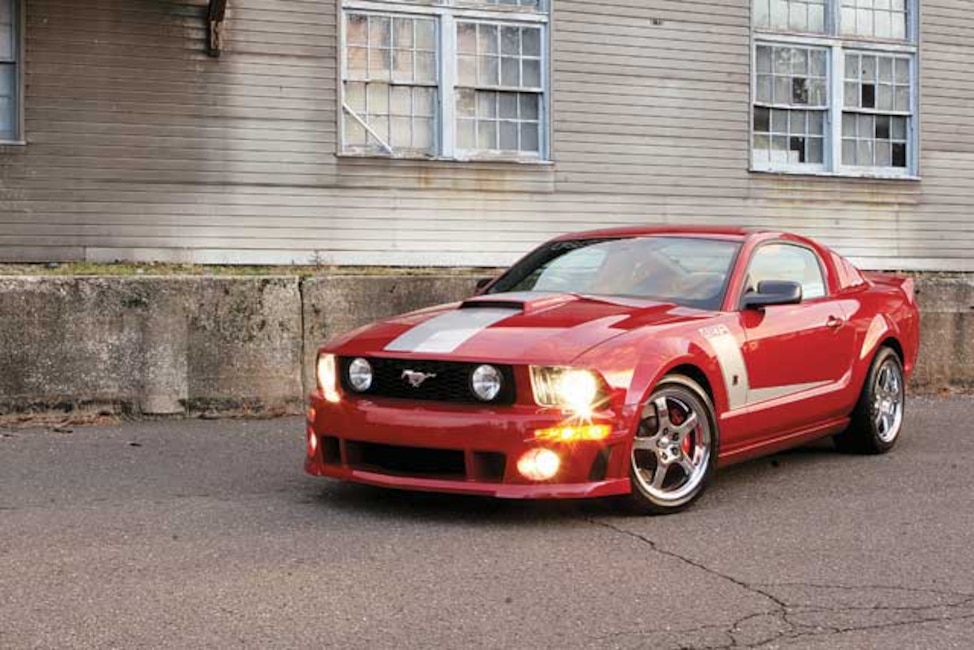 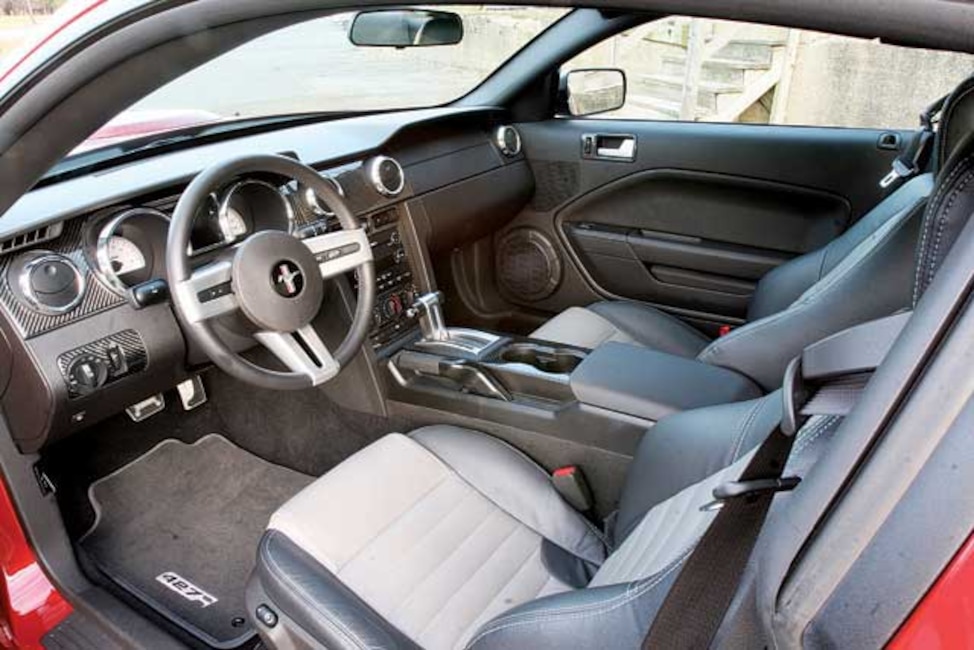 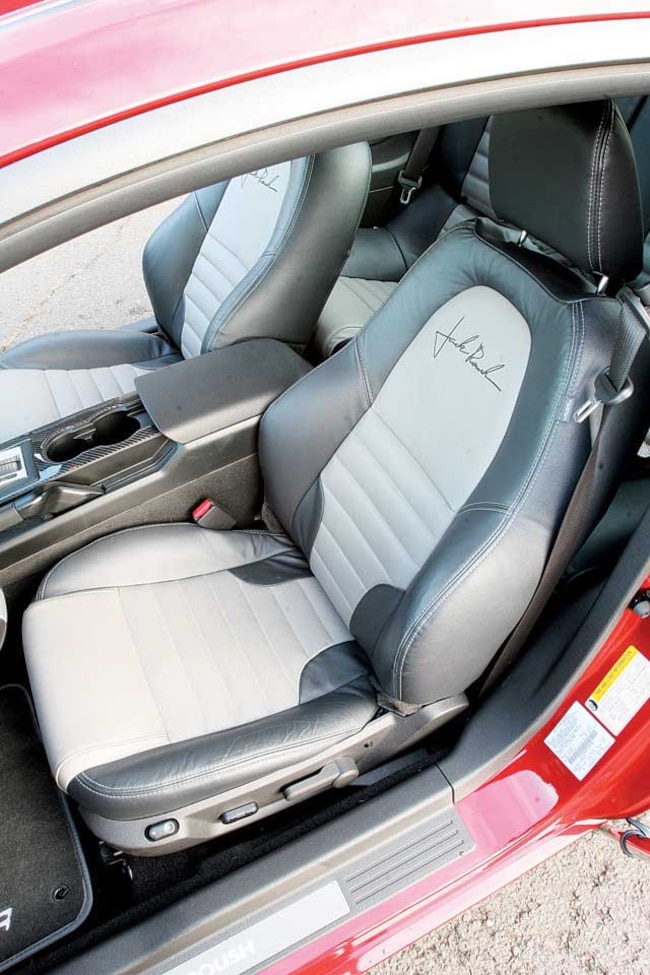 Our tester had the optional Roush Sport leather buckets priced at $1,725. 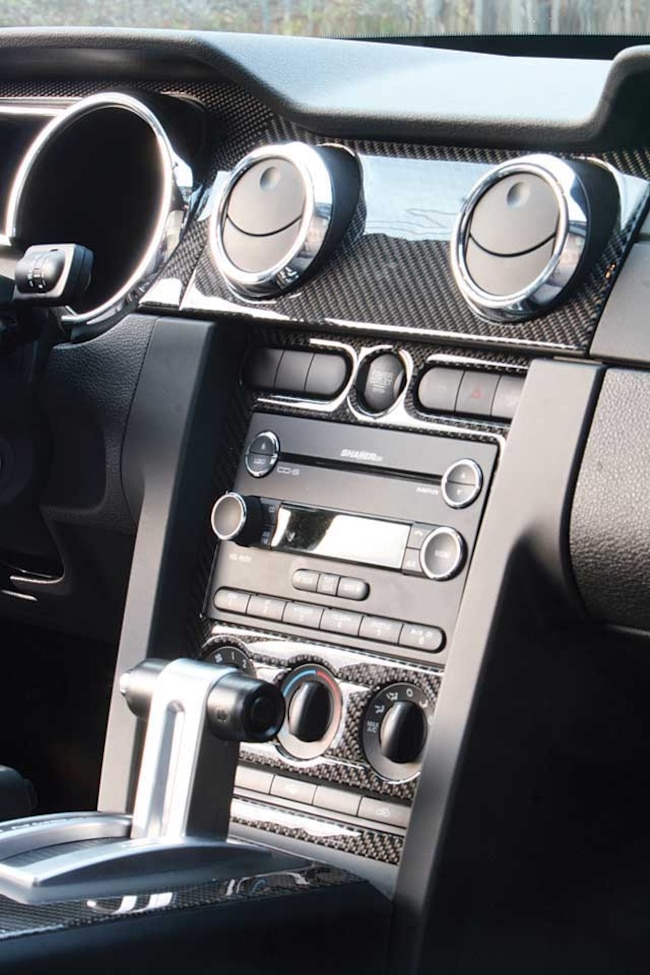 A carbon-fiber trim overlay is part of the optional interior trim kit.

With enough cash in hand, just about anyone can buy a fast Mustang. You can do so right from the local Ford dealer, and once behind the wheel of your 400-500hp stallion, you can tear up the streets, road course, or hit the strip and run deep into the 12s or the 11s. The coveted Shelby GT500, along with the Saleen and Roush supercharged models, will get you there with style and grace. But there's always been a rub with fast, factory, late-model Mustangs: If you wanted the big-daddy engine, you had to get a manual transmission.

That was true until recently when MM&FF wrapped its arms around a popular Roush 427R Mustang, a serious snake that Roush executives tell us is selling like hotcakes. Our tester was fashioned in Ford's new Dark Candy Apple Red Metallic and sported a center stripe, bold 427 badging that flows into a slashing side stripe, and 18-inch wheels. Under the hood lurked a supercharged Three-Valve belching out an impressive 435 hp--backed by an automatic transmission! Yes, an automatic, the 5R55S five-speed to be exact. That the 427R had an auto tranny was of great interest to us, since we've never tested a new supercharged Mustang with anything other than a stick.

"The 427R was designed as more of an entry-level price package for a vehicle equipped with a modified powertrain," says John Clark, communications and motorsports manager at Roush. "This car doesn't typically have all the included features of the Stage 3, such as the side molding and rear fascia. Options on the 427R, such as the four-piston brakes, are standard on the Stage 3. Perhaps the biggest difference is in the suspension and wheels. The 427R has cast wheels and a suspension tuned to the heavier wheel/tire package. The Stage 3 has lighter forged wheels, and the suspension is tuned for that setup. Consumers will notice a number of small but important differences between the two vehicles."

Performance purists and road racers will insist on a clutch and a gear jammer because there's nothing like pulling off the perfect powershift and/or selecting the proper gear for coming out of a corner. Furthermore, stick guys take pride in being an integral part of the acceleration process, not to mention that modern Mustangs have not been known for having performance-oriented automatics (remember the AOD?). Stick versions have always been two-to-five tenths quicker in the quarter.

While true in years past, the '05-up 5R55S five-speed automatic is far and above its predecessors. It is rather strong and benefits from a steep 3.25:1 low gear and close ratios in Second and Third as well, thus providing crisp acceleration and loads of fun for the driver, not to mention amazing simplicity for those not wanting to bang gears or driveline parts.

Strip Savvy
Not ones to dilly-dally, we locked into "Drive" and hustled to the dragstrip. Could the 427R automatic hang with the Roush Mustangs previously tested by MM&FF? In the past, we've run 12.50s in a Stage 3 and 11.90s in the pricey Drag Pak.

On a cool day at Raceway Park, we put the 427R against the clocks and laid down a series of 12.40s at 107-108 mph, our best being a 12.44 at 108. This came after burning out, staging shallow, and by releasing the Roush with a smooth yet aggressive application of power.

Looking for more, we bolted on a set of drag radials, powerbraked to 1,800 rpm, and mashed the gas--hard. The "R" scooted from the line with no spin (1.76 60-foot time). It then pressed us firmly in the seat until we crossed the stripe 12.32 seconds later at 109.36 mph. Going fast was as easy as deactivating the traction control, canceling Overdrive, and then flooring the electronic throttle. Impressed? We were.

While 12.30s are quicker than most other stock Mustangs, we still wanted more. The weather report showed high pressure and cooler temps were coming, so a second trip to E-town was planned. Using the same sticky drag radials and breathing colder air, we managed a quicker 12.20, again at 109 mph to end the day. The decrease in e.t. was representative of the cooler air, but due to a stiff head wind, the speed didn't pick up. The strong wind killed about 2 mph and a few thousandths of e.t.

Jackrabbit drag starts were as easy as power-braking and floor-boarding the throttle.

A "Stage 427" badge decorates the rear of the Mustang.

Lapping the Roush on a cold track caused some serious oversteer for Editorial Director Jim Campisano.

Street Smarts
The 427R has an ominous presence on the street. It extracts mad attention from car guys and girls, too. I can't recall a test car that caused so many cell phone cameras to be whipped out. Even the teenagers on my block had their jaws dropping, as did the guy at the local pizza joint. There's something magical about this car and the numbers 4-2-7. Be it the 427 badging, the side stripe, or the aggressive overall look, this Stang makes heads turn--rapidly. Thankfully, there is performance to match.

Though we were skeptical at the start, it didn't take long to love the automatic. Just pop it in gear, and you can deal with the daily commute, or romp it and turn great numbers without the fear of a missed gear or a broken driveline component.

In typical Roush fashion, the suspension was tuned for improved handling, but it was not overly aggressive. Cornering performance was enhanced with Roush springs, shocks, and struts. Additionally, our car was fitted with the optional 14-inch brake upgrade ($2,699), which made stopping quickly a treat.

OK, we can get over that, but more importantly, we didn't like the Cooper Zeon 275/40/18-inch tires that just didn't stick. They spun feverishly on the street, even when accelerating with moderate throttle, and more so in the rain. We mainly drove the 427R in colder conditions (where you can expect reduced traction), but nevertheless, the tires didn't provide the level of grip we would expect from a $51,000 car.

Clark explains, "As you know, when the 427R was introduced last year, it had 427 hp, which was the base for the model name/number. When we were able to increase the horsepower in 2008 [to 435] there were internal discussions about keeping the name or changing it. In the end, it was Jack Roush who decided that the 427R should evolve into a model number in the Roush lineup, likening it to the Porsche 911. Over the years, Porsche has changed that car in multiple ways, but consumers recognize the model and the family heritage. That is the same approach that Roush is taking with the 427R--making it into a family that could change and evolve from model year to model year."

On a brighter note, the Three-Valve 4.6 is amazing. It benefits from an intercooled RoushCharger making about 5 psi of boost, which is enhanced with a Roush computer tune to produce the aforementioned 435 ground-pounding horsepower and 400 lb-ft of torque. We enjoyed the abundance of low- and midrange torque present at tip-in, and when we squeezed for wide-open throttle, the blower howled, and we accelerated at a rapid rate. This car will spin the tires at will, although traction control keeps you in check. Delete "TC" with a press of the dash-mounted button, and you can have the tail hangin' out all over town.

"As for the automatic," Clark says, "the last time Roush made one available was in 2003. Now, with the popularity of our vehicles, the dealer base and consumer calls to our customer service department have been asking for that as an option. There are a lot of people living in major metropolitan areas who deal with heavy traffic, and a lot of customers just prefer the simplicity of an automatic. With that, we obtained the certifications needed. I doubt that the sales of the automatic will ever equal the manual transmission, but we anticipate them to grow as people become aware of the availability and just how quick and how much fun the automatics are."

We give the Roush 427R a solid "A." During our evaluation, we knocked down 20 mpg (city and highway) and scored many, many looks. Our staff agreed that the 427R is just plain fun to drive, more so than we ever imagined.