2008 Ford Mustang Bullitt - Bullitt Is Back

The Original '68 Mustang From Bullitt Was A Tight Ride, But Steve Mcqueen, Errr... Frank Bullitt, Would Have Loved To Whip The Charger In This '08 Version. 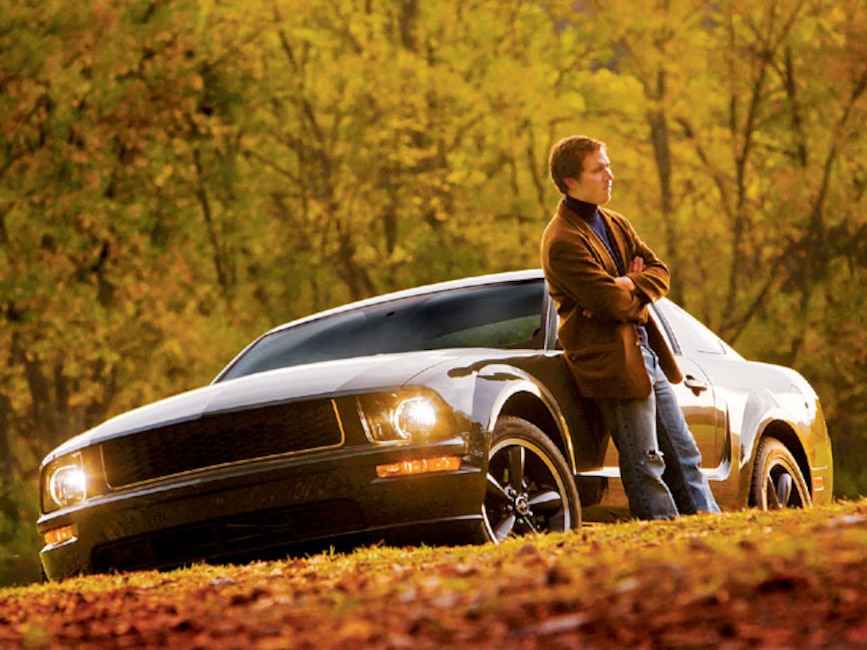 Our Steve McQueen stunt double was "in character" with the proper Frank Bullitt attire. 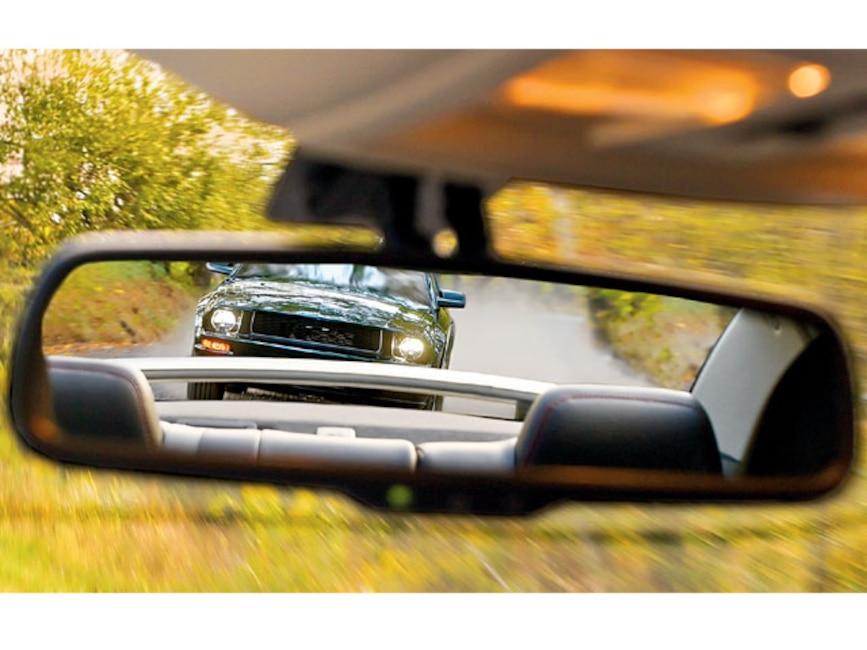 You can almost hear the movie's theme music just before the chase scene. Bullitt is on your tail. 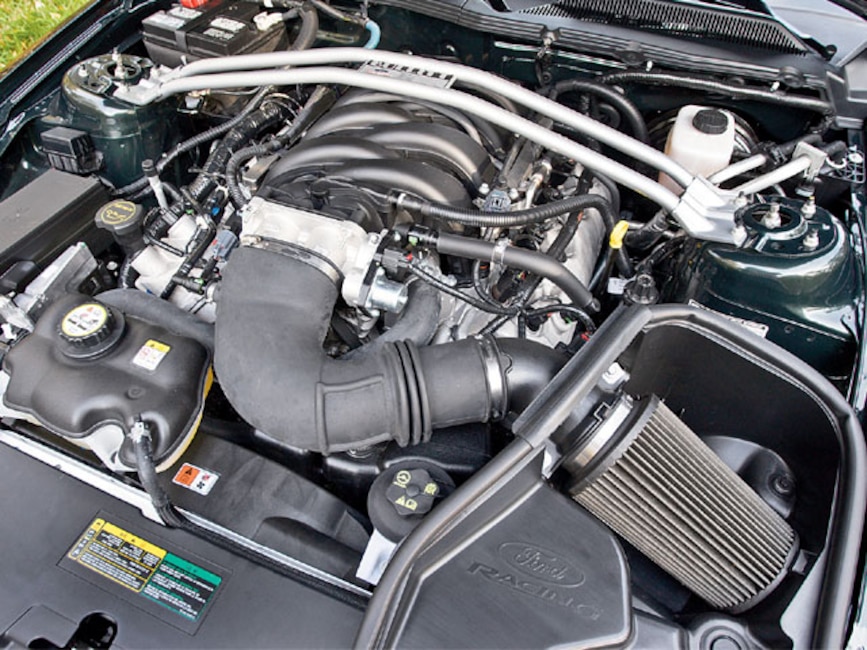 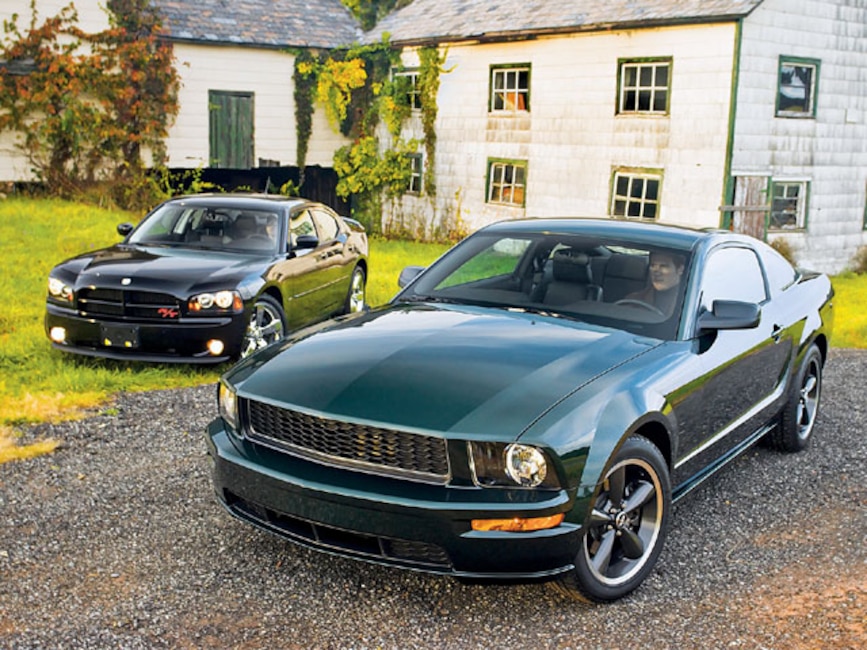 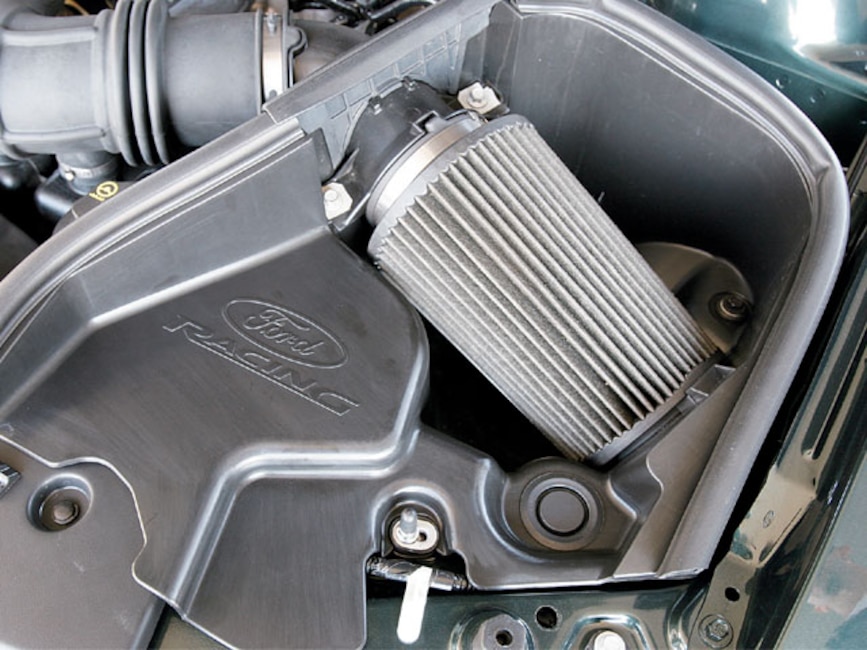 Cold-air induction is factory issue and will be available from Ford Racing Performance Parts. 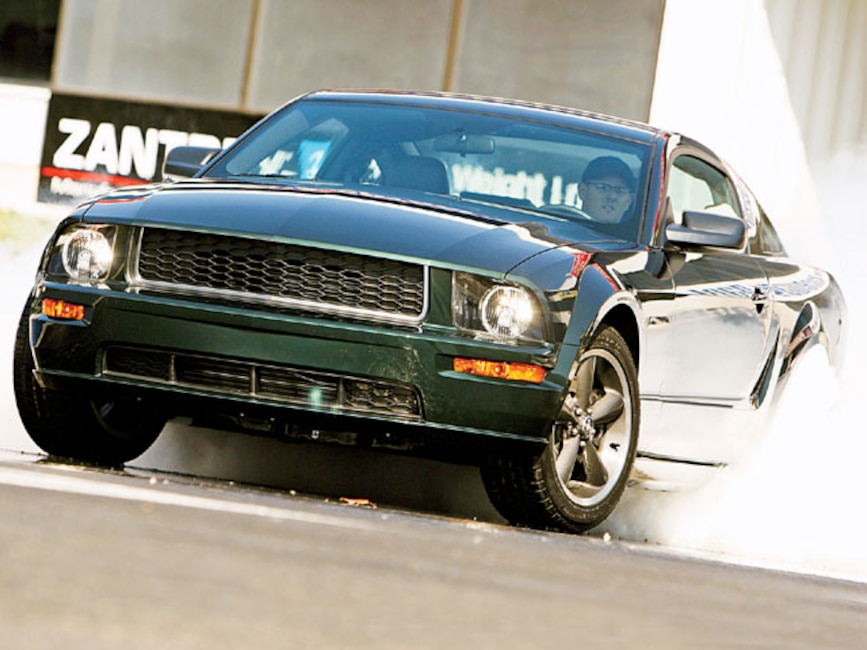 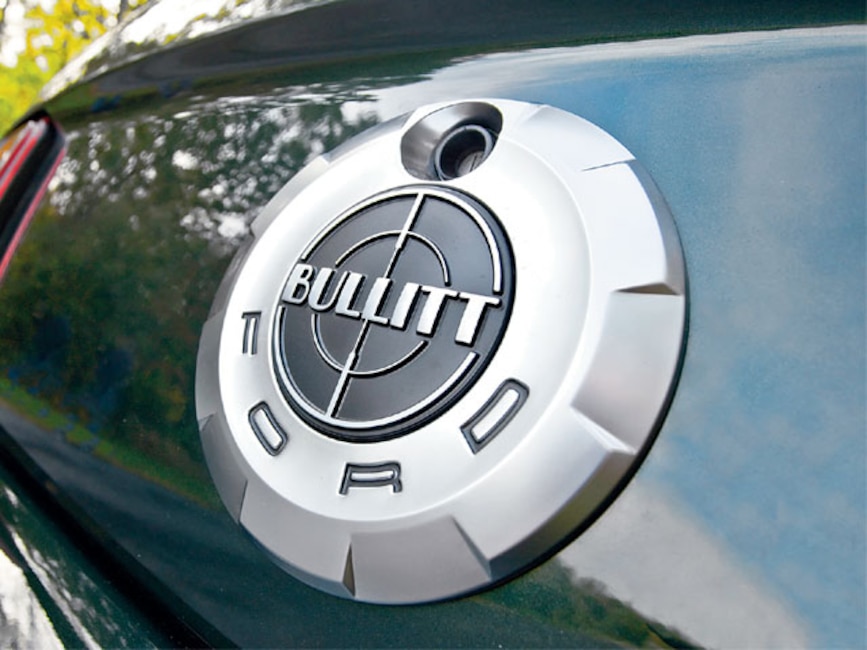 For Mustang and Ford aficionados, the Bullitt Mustang needs no introduction. Some 40 years ago, Bullitt-the '68 Warner Brothers film by the same name-starred the ever-cool Steve McQueen as Detective Frank Bullitt, with his equally iconic costar, a Dark Highland Green '68 390, four-speed Mustang. Together, they chased down the sinister black Charger in a six-minute-plus romp through the wild streets of San Francisco. The bad guys in the Charger fired countless shotgun rounds at Bullitt, but he prevailed, and ultimately, the Charger wrecks in a spectacular fiery crash. Mustang, 1-Charger, 0.

The film's Mustang vs. Charger showdown is one of the all-time-best movie chases. Such a scene will not likely be re-created, although today Mustang fans will get the chance to steal a little McQueen "cool" behind the wheel of the recently introduced '08 Bullitt Mustang.

Yes, Bullitt is back, and we got our hands on one of the Dark Highland Green examples for a week this past October. The question is, what does one do with such a car? Naturally, we looked for the bad guys in a black '08 Charger to chase down. We found one, and the race was on!

The pursuit began on the strip at Raceway Park, before we took the chase to the streets. On screen, Detective Bullitt put the hammer down against those shotgun-wielding fellows in the Charger. His Mustang takes a few direct hits, but he remained unscathed. Shockingly, I couldn't find anyone in our office willing to be shot at-not even the guys on Super Chevy. Plus, Ford Public Affairs wouldn't take kindly to us blasting holes in its newest Stang. So we chose to lay some rubber, while putting the two vehicles through their paces. We're proud to say the Mustang quickly took the lead and never looked back.

Bullitt Is Back-Again
In 2001, Ford paid homage to McQueen's movie Stang, building the '01 Bullitt Mustang. It was a hit, but the current body style better replicates the lines of the '68. With that, Ford has created its newest iteration, the '08 Bullitt.

"It's much truer to the original image," says Doug Gaffka, chief of design on Mustang. "On the '68 [movie] car, they took off the badging, and that became the charm of the car, so we tried to build this Mustang identically. We wanted to take it to the level of the '68. We blacked-out the grille and added some brightwork with the trim. That helps it stand out."

Gaffka and his team fired on target, as this Bullitt clones the '68 with amazing accuracy. "The dash differentiates the interior from anything else on any Mustang," he says. "It [the engine-turned aluminum] is a very expensive process, but in terms of what it brings to the car, it's very important for the design.

"You have to pick and choose what you do so it doesn't become a retro rip-off. It has to have that reflective power to take you back but with modern enhancements. I found this one easier to do than the '01 because we had a better package to work with as far as what we could remove and what we could tool up differently."

Ford's '01 Bullitt packed a special intake, 265 hp, and a host of retro-styled options. The '08 more closely captures the essence, though, due to the resemblance in styling, although it packs every modern creature comfort and better performance than the '01 or 390-powered Stang could dream of.

Ford upped the performance in tried-and-true hot-rod fashion, with better intake and exhaust breathing. Bullitt for 2008 is rated at 315 hp, and those extra ponies (over the 300hp base GT) come by way of a fresh-air inlet with an open-element filter, improved exhaust, and a recalibrated computer tune. There's also 3.73 gearing in the beefed 8.8.

"Paul Randle, who is the chief nameplate engineer on Mustang, has always been interested in the [Ford Racing Performance Parts] Performance Paks," says Jamie Allison, Performance Parts program manager at FRPP. "He asked us, 'Why don't you send me a set [of parts] and we'll see what we can do?' He challenged his team to put the FRPP bits on there, and he came back with the mainstream-designed, tuned version of those parts.

"This resulted in the most balanced package that you can do. We're now replacing our aftermarket parts with these cold-air and exhaust parts. This elevates the game. Team Bullitt wanted to attack the enthusiast who may not want to track the car, but they really rounded out the handling characteristics."

From an engineering standpoint, Bullitt is quite different from the standard Mustang GT. We found the handling and road feel to be precise and more neutral in balance. You can feel the performance provided by the extra 15 hp and the 3.73 gears, and a set of Shelby GT500-like seats keep you firmly in place during spirited maneuvers.

"We put a business case together from both an appearance and function angle," says Paul Randle. "For appearance, Doug [Gaffka] had free range to do what he wanted: the color, type of wheels, brake calipers, badging, and everything else. We're pleased, and it has everything that we wanted to put into this Bullitt that resembles the '68 Bullitt. Production will be about 7,700 units sold in the United States and Canada.

"On the '08 Bullitt and the '08 GT, we really focused our efforts on vehicle noise/vibration/ harshness (NVH), specifically in the drivetrain. We calibrated the 4.6 engine and raised the rev limiter from 6,250 to 6,500 rpm. The engine mapping is enhanced [on the Bullitt], and we've been able to certify the engine for 315 hp. The torque curve has about a 5-pound increase at tip-in and from off-idle to 2,000 rpm. Then there's a dip, but at 2,400 the 5-lb-ft of torque comes back for the rest of the rpm range." Randle tells us the springs and struts have been improved for handling, and the Bullitt sits 6 mm lower than a Mustang GT.

"The 8.8 has the Shelby GT500 mods, which equates to larger axle tubes and larger bearings, and Bullitt gets 3.73 gears," Randle says. "It also has increased hardening on the ring gear, which the Mustang GT doesn't have. The 3650 five-speed trans is the same. The '08 Bullitt has 311/42-inch exhaust tips, but it has a unique H-pipe and unique tuning. We set out to be as close to legal noise with reduced backpressure.

"Our next job was to see how we could suck air in optimally. On the current GT, it sucks from the left-side fender. We went to an open-element filter, and the box was sealed to a hood blanket. We went from a rise over ambient from 57 degrees to 24 degrees at the air filter. There's also a dual-knock strategy that allows the engine to run on regular or premium gas. We have a more aggressive spark with premium, but there's not a lot of difference [in overall power]."

Track And Road
As noted earlier, our chase ensued at Englishtown's Raceway Park, where Bullitt out-powered the Dodge on the quarter-mile. It took a few runs to find the best launch technique for the Mustang, but after we learned to rev the engine to 3,000 and slide the clutch just right, we were rewarded with a 13.29 at 105.27 mph.

Bullitt's cockpit is about as good as it gets, from the engine-turned aluminum dash, to the retro gauges, to the front seats and steering wheel, which are GT500-like.

Gauges get a retro font with a "cross-hatch" in the middle.

Each Bullitt is serialized from Ford and gets this unique strut-tower brace.

Unique to Bullitt are painted calipers that match the wheels for a stealthy appearance.

On the road, we pushed both Mustang and Charger, and again it was no contest. Bullitt drove away thanks to its unique spring, shock, and strut tuning. It's balanced towards track handling but is plush enough for a daily driver. There's definitely a difference between the Bullitt and the '05-up Mustang GT. Bullitt is lowered (6 mm), and with its improved suspension, it has better overall grip and a more neutral feel that is less prone to understeer.

The seats offer comfort for the long haul, yet the enlarged side bolsters keep the driver in place. The leather seems softer than most Mustang seats, and we also really liked the GT500-style steering wheel that fit perfectly in our hands and translated road feel back to us in a precise manner. Through the curves and on the straights, the Mustang, with its better power-to-weight ratio, could drive away from the Charger, although the Dodge hung in there quite well for a heavy sedan. It, too, had a nice road feel, and handling was more precise than one would expect from such a large automobile.

Due to obvious reasons, we had to forgo the big jumps, fender smashing, and gunshots, but we did have a blast running up and down the hilly byways in northwestern New Jersey. We even had one of our guys, McQueen stunt double Thomas Lyman, dress up as Frank Bullitt-blue turtleneck, brown tweed jacket, and all.

Perhaps best of all is Bullitt's price tag, which Ford tells us is under $31,000. That's a lot of pizzazz for your pennies-so long as the dealers don't gouge out your eyes. Whether you want to live out your Steve McQueen fantasy, or you simply want one of the coolest new Mustangs to hit the streets, Bullitt is one serious player that won't be easily beat.

Editor's Note: MM&FF would personally like to thank Darin Buhler of Buhler Dodge/Buhler Ford for providing the Dodge Charger for this photo shoot. Buhler Dodge/Ford is located at 105 Rte. 36 in Eatontown, New Jersey. You can also contact them by calling 732/544-5515 or by checking out www.buhlerauto.com.