Cruising the Streets and Carving Corners at the Track with the Steeda Q335 Mustang.

At Muscle Mustangs & Fast Fords, the press cars we get for new-car tests usually come and go within a week or so; a time period that flies by all too quickly, especially if everyone in the office gets a shot behind the wheel. Today, however, we bring you the '07 Steeda Q335 Club Racer, a hopped-up horse that we sampled for over a month. We drove it to dinner. We drove it to the grocery store. We commuted in it 84 miles each day. We also took it to the autocross and dragstrip. To say we got some seat time is an understatement.

New-car smell aside, we expected the specialty Stang to be tractable for the average driver, and the Steeda Q335 was every bit of that and more. The real test, however, came from rolling in a Mustang that had been modified for increased handling and performance. Oftentimes, increased handling comes at the cost of ride quality, so we monitored the seat-of-the-pants meter for comfort as well as control.

Steeda Autosports in Pompano Beach, Florida, has been improving on Ford's ponycar for years, so one has to figure that the company would get the combination right, and it has. The Q335 is Steeda's entry-level model, and noticeable improvements have been made in engine output, road-holding and appearance.

Visually, our Grabber Orange tester was a hit with nearly everyone. We received positive reactions from 10-year-olds to 70-year-olds and everyone in between. We liked it too, especially with the Steeda graphic and paint updates, which helped break up the bright color and gave it a more racy nature.

The Sidewinder color-keyed graphics package, front splitter, and rear wing are standard on each Q335, but ours was upgraded with the competition front fascia and rear decklid badge, along with the hood- and rear-valance blackout option. These items joined with Steeda's 18x9.5-inch Ultra-lite wheels that were wrapped with Nitto's new Invo performance tires to set the tone for the Mustang.

Inside, improvements were made to the already great Mustang interior, such as the billet-aluminum shifter knob and door-lock pins, white-faced gauges, and a Steeda ID plate to signify the build number. Beneath the shiny shift knob is a Tri-Ax billet shifter, which tightened up shifting.

Under the hood, Steeda unleashed a few more ponies from the Three-Valve mill, starting with its cold-air induction system, charge-motion intake manifold plates, a 2.5-inch axle-back exhaust, and underdrive pulleys, all of which have been fine-tuned with a custom ECM calibration. These mods are said to generate a 48hp increase over the stock Mustang power output. While the extra horsepower is more than welcome, where this Steeda Mustang really shines is in the turns.

Only minor, tasteful trim pieces have been added to the S197's cockpit.

In order to improve the S197 platform, Steeda makes a host of modifications beneath the unibody chassis, starting with its Sport coil springs, Pro Action shocks and struts, front and rear antiroll bars, strut tower brace, and G-trac brace. The antiroll bars are fixed to the chassis via Steeda's billet brackets, and out back our Q335 had the optional billet aluminum trailing arms.

While a performance coil spring set can often make ride quality suffer, we found that wasn't the case with the Q335. The ride was tightened but not too stiff, and its compliant nature made for a comfortable commute each day.

This isn't to say the Club Racer doesn't perform as its name implies. We crashed our local autocross event, which is put on by the Florida Corvette Racing Club (FCRC), and drove to some impressive results. Late-model Corvettes have quite the set of long legs, so the club regularly stretches the autocross layout, sometimes using more than a quarter-mile of concrete. In using such an expanse for the course, entrants often see speeds much greater than your average parking-lot, cone-bashing setup. 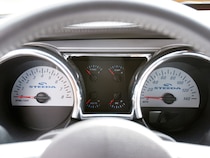 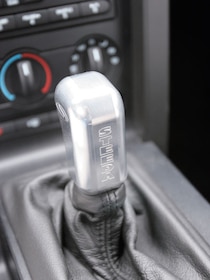 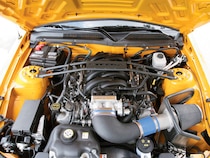 Nitto's new Invo tires, sized 275/40/18, worked better than we expected on the autocross course and on the dragstrip. We're pretty sure the 14-inch front and 13-inch rear brakes with front ducting upgrade helped a lot as well. Though our local autocross course is pretty spread out and sees speeds up to 70 mph, we hammered the stop pedal all day and never experienced any fade whatsoever, and the ABS allowed us to take advantage of the increased stopping power.

Going into the event, the Q335 wore Nitto's Invo high-performance radial tires, good for dry and wet weather traction. Your author's best lap times came in at 1:01, 1:02, and another 1:01 with a passenger riding shotgun. That last run was preceded by a passenger-enhanced 0:59-second lap in which he nicked one cone. Throughout the event, we noticed two or three competition tire-equipped C5 and C6 Corvettes dipping down into the 0:52-second range. For all our effort, we did beat at least one C6 Corvette.

Compared to the Shelby GT-H Mustang we recently tested at the same autocross, the Steeda easily outperformed the rental car thanks to an increase in lateral grip and neutral handling. Stock Mustangs understeer quite a bit to begin with, and while the handling pack on the Shelby reduced body roll and kept the stock 235/55/17 Pirelli tires planted better, the Shelby would still tend to understeer, and the limit of adhesion was easily found. The wider, 275/40/18 high-performance Nitto rubber combined with the Steeda suspension components on the Q335 provided a balanced car with a quicker turn-in response and increased traction throughout the turns, which allowed us to whip in and out of the cones confidently and without the nose plowing through them.

At the end of the day, we let FCRC instructor, Todd Ausley, hop in the Q335 to make some laps with your author aboard. Riding with other drivers is often an insightful experience, as it can show you areas that you may be taking at an incorrect speed or lines that may work better or worse for you. Ausley's first run in the Q335 stopped the clock in 0:59 seconds, and he backed this up with a 0:57 burst.

Q335 Number One received the 14-inch front-brake option in addition to the brake ducts seen here. Combined, the duo provided us with a consistent pedal and stopping distances throughout our high-speed autocross runs.

Knowing the Q335 had an even quicker time in it, we were impressed with its performance given the power-to-weight ratio and tire advantages the Corvette guys had. Ausley and your author both agreed that with a track tire, the Q could get down with the best the event had to offer.

The following week, we shifted our attention to the quarter-mile and trekked to Bradenton Motorsports Park (BMP) in Bradenton, Florida, where we would flog the Q335. At the time, our home track in Englishtown, New Jersey, was still closed for the winter, so our Southern testing facility was put into effect.

Florida's February weather saw the Q335 breathing in an easy 75 degrees of air temperature-not the great air we're used to at E-town, but better than trying to snow plow the track surface with the Steeda front splitter. BMP's staff had the racing surface nice and sticky, and our first pass of the day was a 13.24 blast at 105.09 mph, with a 1.98 60-foot time. We had, of course, powershifted each gear, and the track simply wasn't up to holding the 1-2 exchange, so subsequent runs were speed-shifted from First to Second. Pass number two was a 13.25 at 105.65, and our third effort of the day saw 13.22 at 105.16 flash on the clocks.

The dragstrip doesn't tell the whole story, though, as we were consistently impressed with the Q335's low-end torque that we often used around town and on our commute. It's spunky, to say the least, and we can tell you there's an LS2 GTO owner who found out firsthand just how quick the Q335 is.

Over the course of our five-week stint with the Q335, we discovered that it is very livable as a daily driver, but if your self-control is lacking, you can find yourself in trouble with Johnny Law, as the Q335 is a whole lot of fun to fling around turns and fast forward from stoplights.

The price of admission for this fun ride starts at $40,545, which includes Ford's Mustang GT. Our tester Q335 featured an additional $7,716 in optional equipment. That will put you in Corvette territory money-wise, but the Vette won't have the four seats, sizeable trunk, and unique styling the Q335 Club Racer offers.