"Driver's license, insurance and registration, please?" asked the CHiPs officer after pulling over an unsuspecting citizen. "Do you have any idea how fast you were going? Who do you think you are, Parnelli Jones?" "Umm..., actually I am," calmly answered the American racing legend, while driving near his home in Southern California. Amazed, the officer released Rufus Parnell "Parnelli" Jones, with only a verbal reminder to obey the local laws. How do we know this? Because we recently had the fortune to cruise with the great Parnelli during a recent trip to SoCal to test Saleen's latest creation, the '07 Saleen/Parnelli Jones Limited-Edition Mustang.

The Saleen/PJ was born after Parnelli drove to Saleen headquarters to personally show Steve Saleen the '70 Mustang he was restoring to look like his championship-winning '70 Trans Am Boss 302 race machine. "While the looks were there, the creature comforts and handling were not, at least compared to today's cars," says Steve Saleen, president and CEO of Saleen. "[Parnelli] really liked the retro lines of the new Mustang, and we discussed doing one like his old car that he could use as a daily driver. One thing led to another, and we realized it made sense to do a tribute vehicle."

Over the course of many decades, Parnelli Jones amassed dozens of wins in Midgets, Sprint Cars, and Stock cars; in off-road competition at the Baja 500 and Baja 1000, in hill climb at Pike's Peak and, of course, in Indy cars. In 1961, at the Indy 500, he shared Rookie-of-the-Year honors, and in 1962 he qualified on pole at the Brickyard, the first driver to do so over 150 mph. He returned in 1963 to drink the milk after winning. By the late '60s, Parnelli moved from open-wheel cars to bodied machines in the SCCA Trans Am series, racing Mustangs prepared by Bud Moore. It was in that classic Grabber Orange '70 Boss that he won the hearts of Ford fans everywhere, along with the Trans Am championship. 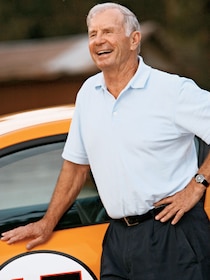 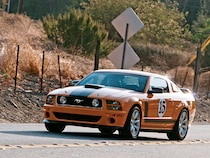 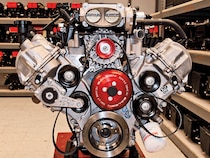 To commemorate Parnelli's storied career, Saleen is offering a limited run of 500 Saleen/Parnelli Jones Mustangs styled heavily after the championship-winning No. 15 Boss 302. "We'd never done [a tribute car] at Saleen, but we knew right off the bat that it needed real things to make it authentic," Saleen says. "It had to be visually as close as possible to the Boss 302 of yesteryear and evoke the same performance with the same type of passion.

"Parnelli Jones is an American racing icon. In the '50s, '60s, and '70s, he won just about every race he appeared in, including the Indy 500. In 1970, the year that the SCCA Trans Am Series boasted its most competitive field ever, Parnelli Jones and his Boss 302 Mustang competed against the likes of Mark Donahue and Dan Gurney, and there he captured the championship. Our relationship began in 1987 when Parnelli raced for me on the Saleen team and helped us win our first SCCA Manufacturer's Championship at Sebring, Florida. I can't think of any other individual who brings with him the unique connection between championship-winning Mustangs and Saleen." 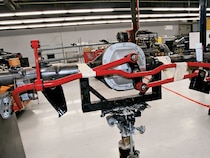 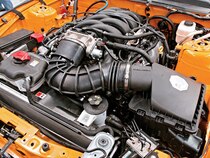 Lest you think this '07 Grabber Orange Mustang is a sticker package away from stock, think again. The PJ is engineered from the ground up for enhanced performance, including a new heart in the form of a completely rebuilt Three-Valve engine that is bored and stroked to produce 302 ci.

To achieve this, each engine is removed, disassembled, and then rebuilt with a 3.80-inch stroke crank, Saleen connecting rods, and forged pistons. Extensive cylinder-head work is done at the in-house engine-building facility, and Saleen-specific cams are installed along with larger valves. Compression is increased to 10.5:1, the redline is raised to 6,500 rpm, and after employing a 94mm mass air meter, Saleen exhaust, and Powerflash computer, the result is 400 naturally aspirated horsepower and 390 lb-ft of torque. The 302 is backed by a stock five-speed manual transmission, and the 8.8 receives 3.73 gears.

Saleen used a race-inspired suspension underneath, and handling far exceeds stock thanks to Saleen Racecraft N2 struts, Saleen linear-rate springs, a 1.38-inch tubular stabilizer bar with urethane bushings, and Saleen-calibrated alignment settings. Out back are N2 shocks and a Saleen Competition Watts Link that replaces the factory Panhard bar. The PJ rides on Pirelli rubber 275/40/19s in the front and 285/40/19s in the rear and are wrapped around amazing Saleen Minilite-style aluminum wheels.

Want to know more?
Of course you do. That's why I set off behind the wheel of a production Saleen/PJ-albeit with the legend himself, Parnelli Jones, as my co-pilot. Starting on the open freeway and ending up in the curvaceous hills of the Ortega Highway near Irvine, California, allowed us to exercise the power of the 302-inch Three-Valve and the Racecraft suspension.

Sitting in the PJ is enough to get your adrenaline pumping. You peer over the functional Shaker scoop and fantasize about running through the curves of your favorite track. The seats are plenty comfortable but are bolstered and styled after the seats from a '70-model Stang. Crack the key and the 302 Mustang rumbles to life. I love saying 302 Mustang-it just sounds right. It's not too loud, due to stock manifolds, but it revs quickly and freely thanks to the enhanced breathing of the ported heads and the aluminum flywheel.

While this is a street-worthy '07 Mustang, your senses tell you it's a bonafide racer. Engage First gear, rev it up, slide out the clutch, and the PJ moves forward with aggression. The lower gears and extra horsepower greatly enhance acceleration, and the Saleen shifter, which is mated to a stock five-speed manual, is silky smooth.

"It's a true honor to have a special edition Saleen wearing my name," Parnelli says. "This impressive car takes me back in time-it makes me want to take it for a run around the track. I'm sure this car will be an adrenaline-pumping experience for anyone who has the chance to own or drive one. I think this car is going to evoke nostalgia not only for Steve Saleen and myself, but for everyone who lays their eyes on it."

We slithered through tight turns and put the PJ to the test with your author and then with Parnelli behind the wheel. Thankfully, we never lost grip. Power is smooth, linear, and easily controlled with the suspension, steering, and the 14-inch slotted and vented rotors that get clamped by Saleen ABS four-piston calipers. Since we weren't on track, we couldn't push it to the limit, but we did realize this is one fast and well-balanced Mustang. The combination is neutral and gives the driver excellent feedback at the controls. Saleen stated that the car was amazing on a closed road course, beating some of the exotics of much greater value.

"We went with the Watts Link because in 1970 Parnelli ran one on his Bud Moore Engineering Mustang," Saleen says. "And to be true to the original, we wanted to adapt that suspension. To get the geometry right we had to recast the rear cover to make it perform properly. Part of our expertise is suspension, and we applied a lot of lessons learned from racing and performance vehicles. What we weren't prepared for is how well it really worked. It will be available as a "Saleen-Link" for '05-up Mustangs shortly."

After spending the day with Parnelli and the PJ Mustang, we came away impressed-the only caveat was that we wanted one to take home. So, how much will a PJ Mustang set you back? MSRP is locked in at $59,015-by no means cheap, but a solid value as far as high-performance/collector Mustangs go. Only 500 will be built, Saleen assures, and many of you have invested far more into Mustang projects. We think this is just about the perfect Mustang to add to our collection. Mr. Saleen, sign me up.

The new and the old, parked neatly at the Petersen Automotive Museum.