The '06 Pony Package takes the base Mustang to another level.

Dain Gingerelli
September 11, 2006
One thing MM&FF wished for when it first sampled the S197 Mustang in the December '04 issue was an upgraded handling suspension for the V-6 model. With the new-for-2006 Pony Package, we got what we asked for. It looks a lot better than the base V-6 model, too, though we could live without the black tape stripe.

The Mustang's V-6 model is the Rodney Dangerfield of Ford's family. It gets no respect. When a Mustang V-6 owner is mocked because his car is slow, and he says he wants a second opinion, naysayers yell, "OK, it handles like a bucket of bolts, too."

I tell ya, they get no respect, no respect at all.

"When I was born, the doctor came into the waiting room and said to my father, 'I'm sorry. We did everything we could, but he pulled through.'" -Rodney Dangerfield

Despite the V-6's reputation as an underachiever, these '94-'04 cars were decent performers and a quantum leap over the four-cylinder base models that preceded them. Factor in a lower MSRP, favorable insurance premiums, and slightly better fuel economy, and you drive away in a more affordable car than its V-8 sibling. Yet little is lost in terms of styling; the V-6 retains the same sexy lines normally associated with the Mustang brand.

Still, until 2005, when you talked about a stock Mustang V-6 being a sleeper, it was because it could lull you into a state of peaceful slumber, not because it had a high-performance engine packed under the hood.

"With my old man I got no respect. I asked him, 'How can I get my kite in the air?' He told me to run off a cliff." -Rodney Dangerfield

Ford recently decided it was time to pack a little more power-and respect-into its V-6. So, for 2005, the baseline Mustang was given more muscle, in this case an aluminum-block, single-overhead cam, 4L V-6 that checks in with a claimed 210 hp and 240 lb-ft of torque. In reality, using K&N Engineering's chassis dynamometer, our test car-Ford's new Pony Package; more about that in a minute-rolled out 182.8 hp (5,250 rpm) and 192 lb-ft (3,900 rpm) at the rear wheel. This is a pretty strong performer.

"I remember the time that I was kidnapped and they sent a piece of my finger to my father. He said he wanted more proof." -Rodney Dangerfield

Dyno figures aside, the new Pony Package (a $1,195 option) gallops quicker than any Mustang V-6 before, and with its flow-through muffler and tailpipe, produces a pleasing exhaust note at idle that mimics the seductive rumble associated with the V-8 model. Step on the gas pedal and that rumble grows into an intimidating growl that reassures you there's some guts to the engine under your hood.

Based on its dyno figures, you can expect about the same kind of straight-line performance from the Pony Package as you would on some mid-'90s-vintage Mustang V-8s. The electronic fuel injection offers smooth and consistent fuel/ air delivery to all six holes, producing a seamless power curve up to the 6,100 rpm redline. Ford claims 19 city and 25 highway mpg figures, although during our testing through mountain roads, the on-board computer told us we were netting 17 mpg. Our best on the highway was 27 mpg.

The 4.0 revs quickly, too. The over-bore engine-bore and stroke of 3.95x3.32 inches versus the old 3.8's 3.81x3.39 specs-feels snappy and willing to work under all conditions, although the five-speed overdrive automatic transmission's kick-down was a little slow in responding when reaching for passing gear.

While the new 4.0 offers peppy performance, the really good news about the Pony Package is that it's just that, a complete package. The Pony Package handles and stops like no other six-shooter Ford has produced in its ponycar lineup-ever. Four hefty disc brakes with antilock haul the 3,418-pound (claimed) car to a halt in no time. The 11.5-inch front and 11.8-inch rear discs (compared to the V-8's 12.4-inch and 11.8-inch binders; the V-8 weighs nearly 100 pounds more, too) grab hard, producing minimal fade after repeated stops, and for spirited romps through the curves they deliver progressive feedback to the driver.

The brakes are tucked inside 16-inch wheels (standard), although our Pony Package rode on the now-famed "Bullitt" 17-inch cast-aluminum five-spoke wheels wrapped with 235/55Z-17 hides. Other than an expectant gap in power to the rear wheels, there is little to differentiate the Pony Package from its V-8 big brother while navigating through the turns.

The real fun is simply driving this car. Our biggest gripe when the '05 Mustang was intro-duced was the lack of a rear sway bar on the base model. With less weight on the nose, the V-6 car just left too much handling potential on the table. It understeered miserably, making it completely unsatisfying when pushed hard in the corners. Not so with the Pony Package. The suspension is taut, yet compliant over freeway expansion cracks and small bumps, and thanks to the addition of a rear antisway bar, body roll is practically nonexistent when cornering hard.

"I'm so ugly, my proctologist stuck his finger in my mouth. -Rodney Dangerfield

Not only does the upgraded V-6 model handle more like its V-8 brethren, but bystanders will be hard-pressed to tell the difference, too. The Pony Package checks in with all the right stuff in terms of styling. The package includes seductive side body panels and the familiar rear decklid spoiler, while a discreet tape stripe along the lower rocker panels suggests this is no ordinary Mustang V-6. Best of all is the '65 Mustang-like grille, complete with a corral around the pony emblem and driving lights.

The interior is dressed to impress, too. Brushed-satin aluminum door panels and dashboard greet you, and you'll settle into the leather-trim bucket seat as you grab the full-grip steering wheel. There are plenty of gadgets and knobs to entertain you as well. Start by loading the Shaker 1000 Audio System's six-rack CD player, then punch in the desired on-board display to review all the pertinent data that Henry Ford's generation never had access to with their Model Ts and As. You can check fuel mileage, how many miles to empty, temperature, and so on. 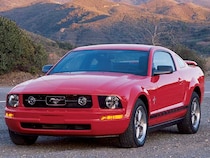 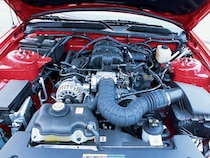 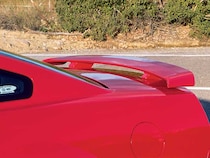 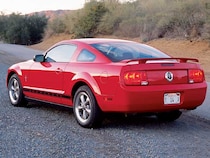 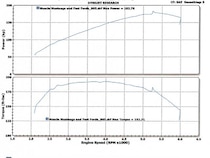 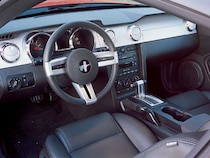